Along with the online Office
apps, push towards OneDrive-based cloud sharing and collaboration and
the whole Office 365 subscription model, another sign that Office is
evolving away from its traditional set of programs are the emergence of
new apps whose function spans several existing apps as well as online
resources.

Sway has been around for a little while now as a free
extra for Office 365 subscribers and it’s essentially a cross between
OneNote and PowerPoint, with an emphasis on web content.

Ostensibly
it’s a presentation tool that makes it easy to import online resources
such as Youtube videos, Tweets and Facebook updates. Unlike PowerPoint,
though, the emphasis is on leaving the formatting to the app, with just a
selection of simple themes to choose from and a drag and drop interface
for moving content around, making it easy to throw ideas down much like
you would with a note taking app. Plus it’s all online so is easy to
share and view. 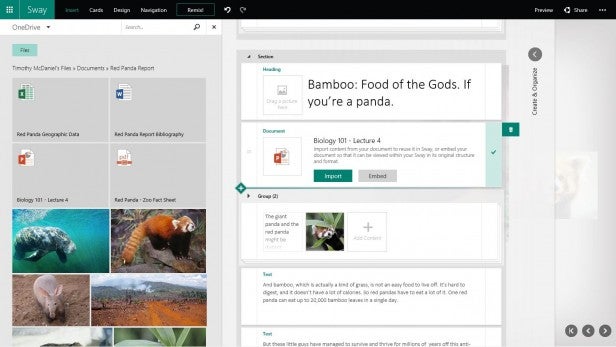 It’s slickly done though definitely quite basic
and it’s still unclear exactly where it fits into the landscape – is it
for note taking, presenting or will it replace both? It seems most
likely to gain traction in the education market, making it easy for
children to generate class presentations without the need to share,
email or print documents.

Then there’s Delve, which is another
new service that’s been around a short while for Office 365 subscribers.
It’s a way for users to share information about who they are, what
they’re working on and what permissions they have, almost like a social
network for colleagues. Along with the Office-wide sharing tools, it’s
another way of putting users in control of their own collaborative
efforts and taking the strain off central IT. 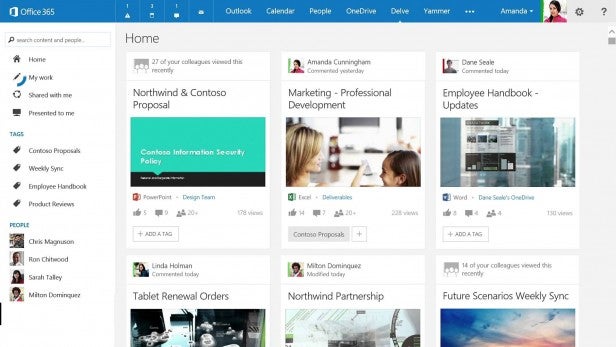 The layout
consists of a list of the people with whom you’ve shared work on the
left, with the right showing tiles of information about the most recent
Office documents you’ve shared with one another. Displayed in a tile
format, each one shows a thumbnail of the document that was created,
along with the name of the person who created or modified it, how long
ago they created or modified it, and the type of document it is. Icons
let you open the file, email the person, start a meeting with them or
log into the shared folder on their OneDrive.

Just as with Sway,
it doesn’t yet feel like an essential addition but a hint of things to
come. Indeed that’s somewhat the story of Office 2016 as a whole. It has
a host of new features and tweaks but it doesn’t feel like a complete
and essential overhaul.

There are two main ways to get hold of the updates in Office 2016. You can either subscribe to Office 365 and receive regular updates or buy a separate license for a one off fee.

If you choose to go the subscription route via Office 365, you can either pay annually or monthly, with prices starting at £5.99 per month or £59.99 per year for a single user (one PC or Mac plus one tablet). This gets you the full suite of applications plus 1TB of One Drive storage plus 60 minutes of Skype calls and ongoing updates.

This rises to £7.99 per month and £79.99 per year for a five user license (5 PCs, 5 tablets). Alternatively, students can get a four-year license for just £59.99. For business users there’s also the option of Office 365 Small Business Premium, which covers five users and includes business email and shared calendar for £119.99 per year.

If you’d prefer to get a standalone copy of the new software then the Home and Student versions for both PC and Mac are £119.99 for a single user. For this you get Word, Excel, PowerPoint and OneNote but not Outlook, Access, Publisher or any included One Drive storage.

If you’d like to add Outlook to the package then Office Home and Business 2016 is yours for £229.99, again whether you’re using Mac or PC. Finally there’s the full monty Office Professional 2016 license that covers one user but includes all the software (again there’s no included storage or Skype calls though). It’ll set you back £389.99. 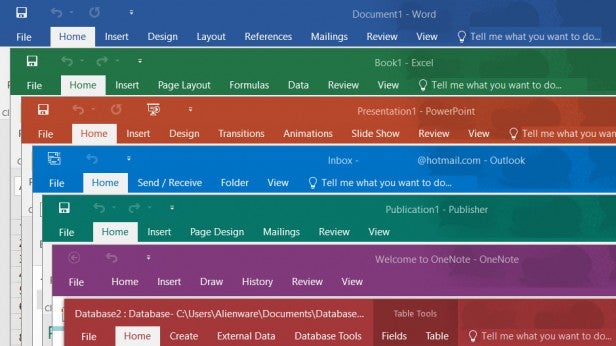 What’s clear from this pricing and the modest changes to the core software is that any home user with a recent existing Office package (Office 2013 or even 2010) will likely find little reason to spend hundreds of pounds on a new license.

In fact, if you do have either Office 2010 or Office 2013 then it’s probably not even worth paying for Office 365, even if you are a fairly heavy user – there just aren’t enough truly useful changes to the core programs. Just stick with what you’ve got and make use of the online Office apps or Google Docs for collaborative work.

If you don’t have an existing version, or only have a really old version but definitely feel you still need the power of the full Office experience then your best bet is likely to switch to Office 365, particularly if you have enough computers in your household that you’ll make use of the five-user license.

Sure, the cost soon adds up but it’ll still take around five years to spend as much as it would to get a full Office license for one user, and with Office 365 you’re getting everything Microsoft has to offer plus the online storage and Skype calls.

If, on the other hand, you’re dead set on having a perpetual license it’s worth looking out for a good deal on a copy of Office 2013, which you can get for half the price of a 2016 license.

As for businesses, small ones will again probably be best looking at an Office 365 subscription, even if you’re not using a full exchange server setup. The greater freedom to admin your own machines will mean users can keep up to date with all the latest Office offerings and can take advantage of the sharing and collaborating tools.

All of which leaves the perpetual business licenses as something only large corporations with more structured IT setups will want to consider.

Office 2016 isn’t a radical overhaul that the majority of users will need rush out and buy. Instead it’s a modest upgrade that doesn’t rock the boat and so is a safe upgrade for long time users and has a few new extras that will be useful for those who work collaboratively.