Microsoft’s latest update to its office productivity software is not on the surface a radical overall, with most of its core apps including few fundamental changes. Instead, much like Windows 10, the focus is on refining the experience, sharing documents and tying together PCs, tablet and phones for a more cohesive experience.

The most prominent feature overall is a push towards document sharing and collaborative working, with Word finally getting real-time collaboration. There are also a number of more significant changes to Excel and Outlook plus a couple of new tools – Sway and Delve.

Otherwise the tweaks are largely modest, but they add up to a potentially significant change across the whole suite, depending on how you work and who you work with. There are also updates to Office 2016 for Mac and for mobile too, though I’ll be looking at those updates separately.

With many users now switching to Microsoft’s Office 365 subscription service the Office 2016 changes will simply be incorporated into their regular updates but for traditional license users Office 2016 will set them back the usual sort of amounts, with prices ranging from £119.99 for the Home and Student version and topping out at £389.99 for the Professional version.

Office 2016 – A colourful new look and better for sharing

The most obvious change in Office 2016 is simply a tweak to the overall styling. Where Office 2013 sparingly used the signature colours that denote each app, for 2016 those colours are now splashed across the title bar and Ribbon menu via the default Colourful theme.

This replaces the previous White theme, with Dark and Light options remaining and being essentially identical to that of Office 2013.

This extra dose of colour ties in with Windows 10, which includes a new feature that lets program developers choose the colour of the title bar, without having to create a completely custom design.

The title bar and Ribbon are also ever so slightly larger than before and the labels for the Ribbon menu tabs have moved from all capitals to just the first letter being capitalised. It all adds up to a noticeable change though not an altogether significant one.

The same could be said of the other main changes that span the whole Office suite. There are just just two of them and for many people they’ll be of next to no consequence. 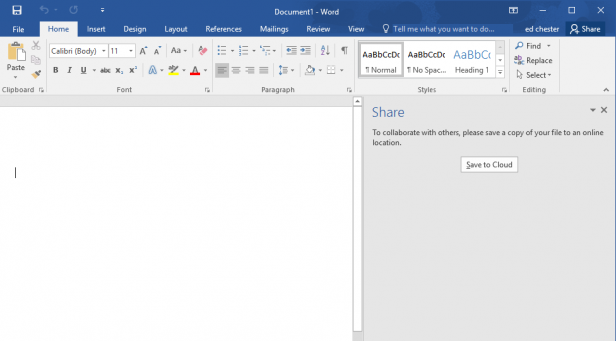 The first is the Share button that sits next to the account button on the right of the menu bar. This allows you to quickly share the file you’re working on with your One Drive contacts or create a link to your files to share via email.

However, unlike the more universal share feature that allows any Windows 10 app to quickly share content with a variety of cloud storage and social media services, this only works in conjunction with One Drive. Without an account the whole menu is left blank – there’s no option to choose dropbox instead, for instance.

As such, if you largely work alone and share files through different means depending on the project – email for one client, dropbox for another – it’s a near irrelevant addition. 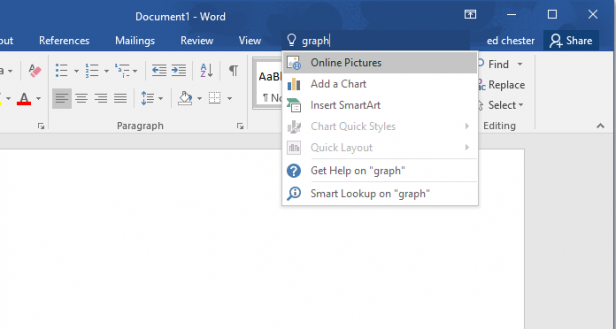 However, the other cross-program (except OneNote and Publisher) change is far more universally useful. The Tell me feature is a search box that’s used for finding menu items that the user either doesn’t have on the Ribbon menus or can’t find on them.

It’s a really useful addition and does a good job of interpreting what you type, suggesting possible answers even if no menu item specifically matches the words, e.g. returning “Add a chart” if you type “graph”. However, it doesn’t tell you where the menu item otherwise resides so you can’t learn the feature’s whereabouts as you go.

Office 2016 – Collaboration is the name of the game

The biggest emphasis of Office 2016 is on sharing, both with the new sharing button and via inbuilt collaboration tools. Collaborative working has been available through Office for a while but only through a basic whole-document save and share system. With 2016, though, Microsoft is moving towards real-time collaboration where multiple users can edit a document at the same time, just like in Google Docs.

For now, though, the job is far from complete. Proper real-time collaboration is only available in Word so far, with Excel and PowerPoint – the two other programs that would benefit most from collaboration – yet to get the feature.  Essentially it works just like in Google Apps, with users able to see who’s in the document and what they’re working on. Users are also able to manage who can edit what and you can do things like lock a paragraph while you’re editing it.

It’s a great feature that’s largely dealt with well. However, by the very nature of Office, you can’t guarantee that every Office user that might want to access the document has the same version of Office – for instance, if you’re collaborating between different companies or with freelance workers. As such collaborative working can be disjointed and variable. 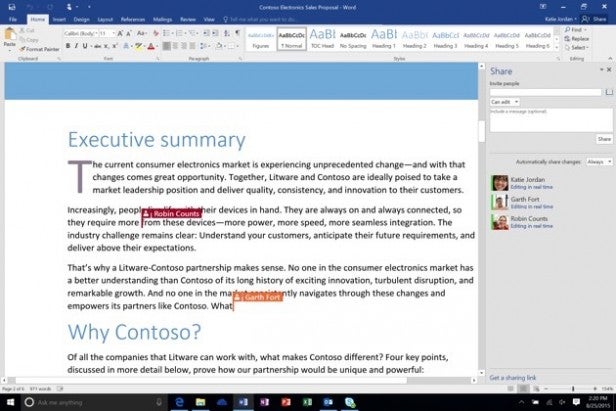 In contrast, if you want to create a collaborative document in Google Docs you know that everyone that accesses it will be able to work on it in exactly the same way.

That said, Microsoft has thought of a way round this. If you send a link to your document to someone that doesn’t have Office 2016 it will open in the Web version of Office and allow them to collaborate through that interface. The web interface isn’t as powerful but is consistent and is likely to suffice for the sort of editing work required when real-time collaborating.

Ways to contact who you’re collaborating with are also integrated into the main suite’s sharing feature, making it easy to quickly fire up a Skype conversation to discuss what you’re doing.

The overall result is it is much easier to work with others in Office 2016. However, until Excel and PowerPoint get the same level of collaborative working, other office tools will likely continue to be the defacto way for multiple people not inside a single office structure to work together on words, data and presentations.

Next
Word, Excel and other changes Review