Like Freddy in Nightmare on Elm Street or Jason in Friday 13th, the PS2 never quite seems ready for its grave. Just when you think you’ve had its final flourish with God of War 2 and Final Fantasy XII, something else comes along to prove that the world’s biggest-selling console ever can’t be relegated to the kid’s bedroom yet. While it’s hard to call Odin Sphere cutting edge, it’s certainly one of the most astonishing games that you might see this year. 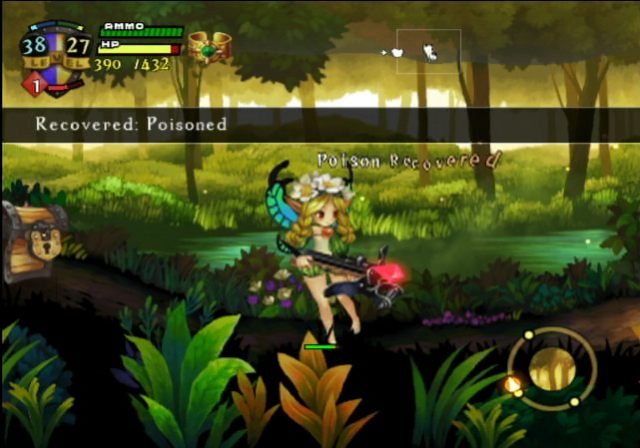 Arguably, this is the old-school 2D game at its graphical zenith, as if we’ve all moved to a parallel universe where 3D never took off and everyone concentrated their efforts on pushing bigger and more colourful sprites around the screen instead. If you like your anime, Odin Sphere is a must. Its gorgeous cartoon backgrounds have been lavished with incidental detail, and in front of them you’ll find the biggest and most beautiful hand-drawn heroes, villains and monsters you could ever hope to see. Some, like the mighty King Odin, merely dominate the screen. Others, particularly the bosses, stretch far beyond your TV’s weedy portal of vision. If you no longer expect a 2D game – let alone a PS2 game – to impress you, prepare to be surprised. Odin Sphere is a seriously beautiful game.


Your next impression may be that hiding behind those astonishing visuals is a rather basic little game. There’s no denying that, while Atlas and Square Enix might like to call it an action RPG, Odin Sphere feels more like a 2D scrolling beat-em-up with strong RPG elements. Each stage of the game is a continuous loop populated by a number of enemies, all of whom must be destroyed before the stage can be cleared. Stages are connected to other stages in a network through a system of exit points, and each of those networks constitutes a chapter in the overall story. Working your way through from one stage to the next you’ll discover a variety of combat scenarios plus shops where you can buy health and support equipment, mini-boss battles and eventually the final boss battle that caps each chapter. Crack one of these, and it’s onto a string of cut-scenes and dialogue sections before the action kicks off once again. 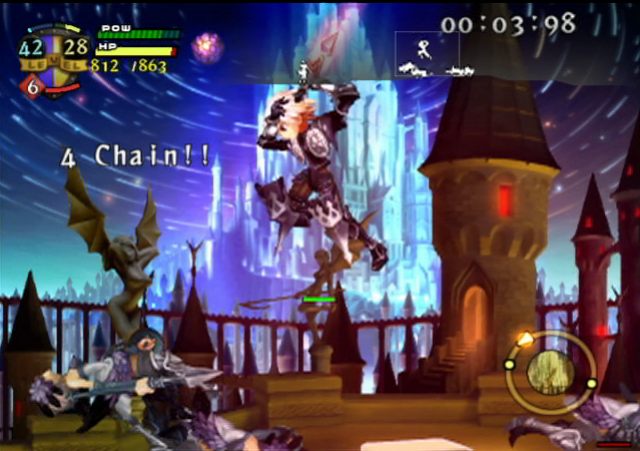 If you’re expecting a combat system of Streetfighter II complexity, think again. Attacks are fired off with rapid presses of the square button, X handles jumping, while the triangle kicks off special magical attacks chosen from a menu. Handily, your initial protagonist – Odin’s daughter, the Valkyrie Gwendolyn – can also glide for a limited period, then unleash brutal charged attacks from above. Finally, the circle button pauses the action so that your heroine can pick something useful out of her bag, though crucially any actual using, eating or drinking has to be done in real-time.

Now, there are combos available from particular timings of attacks, and there’s also a certain degree of strategy in terms of how you deal with multiple opponents, difficult foes or combinations of both. All the same, it’s still tempting to dismiss Odin Sphere as a simple hack and slash effort with RPG trimmings. Don’t. 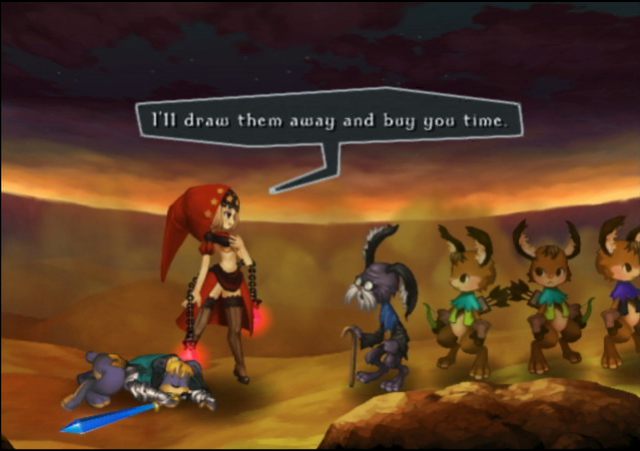 The more you play, the clearer it becomes how important those trimmings are. Basically, you need to get your head around three game systems. First, every enemy slain releases energy, and it’s this energy that powers your magical attacks and levels up your magic weapon. However, you can also plant seeds on the battlefield, and these seeds will suck up the same energy, then grow into plants and bear fruit. This sacrifice is worthwhile, because the fruit, whether a juicy ‘napple’ or a rather bizarre instant sheep, can be converted into a handy health pack.


Secondly, the game has a rather convoluted system of materials and ingredients through which you can brew potions, either boosting health or defences or sending out waves of venom or napalm with which to thrash the hostile hordes. Finally, another slightly odd cooking system enables you to turn raw food into power-ups. All these systems are vital, because as the fighting gets more difficult, merely buying power-ups from the various shops won’t cover your needs. Farming, brewing and cooking aren’t options, but genuine survival skills. 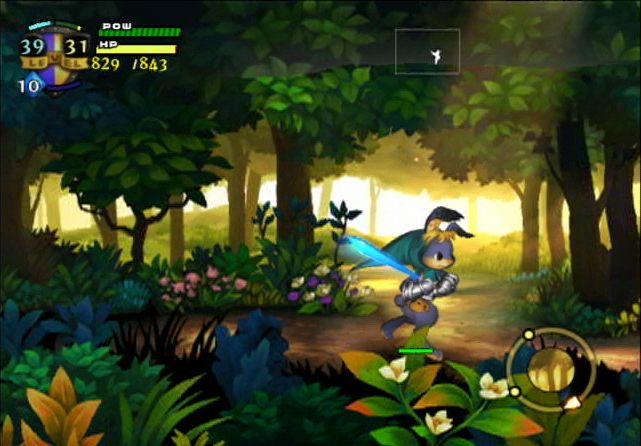 Luckily, you’ll get plenty of time to master them, because Odin Sphere mirrors proper RPGs in terms of its complex narrative and sheer length. Make no mistake, this is proper saga material (as in long-running myths, not the stuff of holidays for the recently retired). It’s absolutely huge. Gwendolyn turns out to be only the first of five heroes, each of whom has their own story arc, their own magic weapons and attacks and their own adventure. Cleverly, each story intersects, building up a magnificent whole that’s a truly epic tale of vaguely Norse fantasy, taking in war, throne-room conspiracies, family melodrama and the odd spot of romance. This proves to be Odin Sphere’s killer feature. Yes, you may find the gameplay repetitive at times. True, there will be some impossible choke points of difficulty at times (though they usually crop up because you’re insufficiently prepared). All the same, the characters and the twists and turns in the story will always keep you coming back for more. 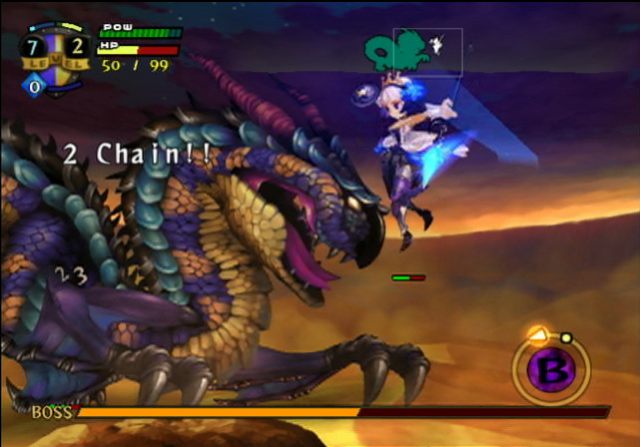 In addition, the structure of the game makes it perfect for playing in small chunks, provided you can resist the lure of just one more stage. And did I mention that it features an anime witch who spends here whole time in a cape, sexy underwear and little else? I guess I could moan on about the odd bit of slow-down or some mildly irritating English voice-work – though the overall standard is really very good – but we’re talking minor niggles, not anything that will seriously mar your enjoyment of the game. 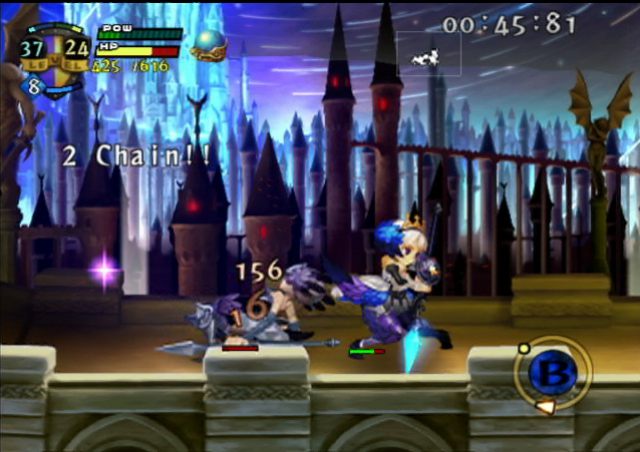 The PS2 may troll along for a while longer, pushing out new versions of FIFA or kiddie film licenses, but there’s a small chance that this is the last brilliant original game it ever sees. If so, what a game to go out on: Odin Sphere is more epic, interesting and entertaining than several more heavily hyped titles I could mention. Ninety Nine Nights and Kingdom of Fire: Circle of Doom, for example, could both have benefited from more of the charm and a little of the depth found hidden here. And if Odin Sphere is the last 2D action RPG we see on Sony’s outgoing system, I sincerely hope that it’s not the last 2D action RPG of all. Something like this on an HD console would really be something to behold.


A staggering showcase of sheer 2D artistry wrapped around a game that’s not as simple as it first appears. Odin Sphere is a must for RPG fans and anime nuts, but surprisingly rewarding for everyone else.