There are only two good reasons to give a game an HD update – ignoring the cash, of course. One is that the game in question is such a classic, and so beloved of its fans, that it deserves to be recreated with remastered HD visuals and enjoyed by a new generation of gamers. The second is perhaps more compelling: that the original game, for one reason or another, never reached the kind of audience it should have, and that it deserves another shot at the spotlight. 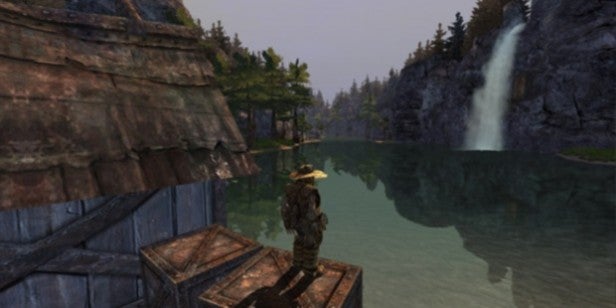 In the case of Oddworld: Stranger’s Wrath HD you could argue that both reasons hold up. It is a classic, held dear by a slightly cultish fanbase and worthy of its new HD trimmings, yet it’s also a game that was misunderstood (and arguably mismarketed) at its original 2005 launch, where it floundered on the first Xbox and PC.

Even now, playing the game in its new PSN download incarnation, it’s not hard to see why. Stranger’s Wrath is very much an Oddworld game, featuring the kind of narrative values, weird creatures and oddball gameplay that built the studio its reputation in its Playstation heyday. Yet it’s also a weird fantasy western, starring an inhuman bounty hunter and a cast of lunatic outlaws. It’s a game that’s styled like a third-person platformer, but that’s mostly played as a first-person shooter and – strangest of all – it’s a shooter where you only have one gun. Your only weapon is a sort of double-barrelled crossbow, but you can vary your offensive capabilities by using different types of ammo, each one a peculiar furry or insectoid critter that, when shot at an enemy, will have a particular effect. All the Oddworld games were odd, but this one is probably the oddest of the lot. 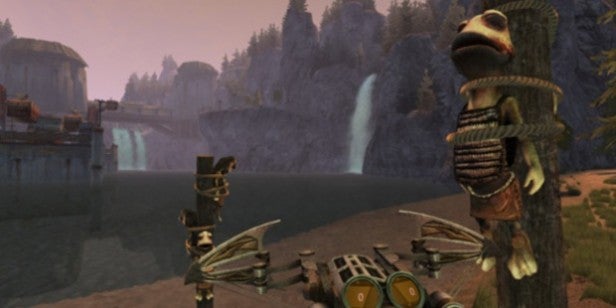 Nor does Stranger’s Wrath have the most orthodox structure. When it arrived most FPS games were very linear, but Stranger’s Wrath mixes and matches its approaches, giving you a series of towns that act like hubs from which you can take on various bounty-hunter missions, but often not giving you any real choice over which mission to accept next, and towards the end transforming into a more straightforward, narrative-led adventure. Playing it now there are elements that remind you of more recent games, like Rage, Far Cry 2 or even Crysis, but really there’s never been another game that looks and feels like Stranger’s Wrath.

And that’s one reason why you really ought to experience it for yourself. At first, the use of critter ammunition is fun but doesn’t seem to make much sense. Wouldn’t it be better to just shoot those outlaw varmints than fire a spider at them and imprison them temporarily in a Web, or lay down a hail of furry creatures that attack them until they fall down? Firing skunks to induce immediate vomiting in a crowd of outlaws is all very entertaining, and the same goes for exploding furry bats. Still, isn’t it all a bit of a gimmick in the end? 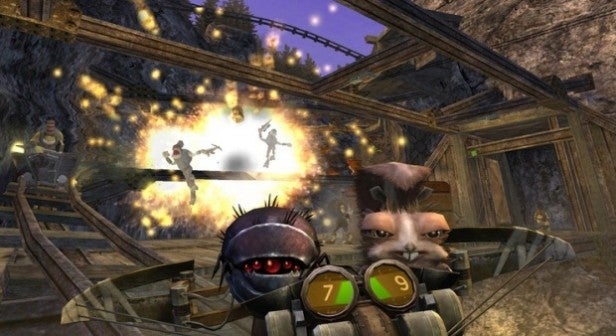 Maybe not. The more you play, the more you realise how ingenious and creative the game’s approach to combat is. In most situations you’re up against large numbers of well-armed outlaws, and despite the game’s fantasy setting you’re not nearly as invulnerable to incoming fire as your average military FPS hero. The onus is on you, therefore, to even the odds by using your critters to best advantage. Fire a group of snarling furballs at the ground near a group of baddies, then use a springing chipmunk to alert their attention. Bingo, you’ve just made yourself a trap. Or why not use rapid-firing wasps to take down one foe while you wrap up another with Web ready to be sucked into your handy bag for live bounty.

For any given situation, there’s always more than one approach, and it’s rarely ‘go in with all guns blazing’. In many cases, there are even opportunities to make the environment your ally, either encouraging your foes to take a fall or go for a swim, or turn machinery into a lethal deathtrap. Years before Crysis and Far Cry 2, Stranger’s Wrath was a shooter that was about more than shooting; it was about taking the tools at your disposal and using them to beat the odds.

Admittedly, there are times when the game’s mix of third and first-person action doesn’t quite gel. To make the big bucks you have to bring outlaws back alive, but to do so you have to incapacitate them, then use a hoover-like device to capture them. This moves the action to the first-person view, and you need to move quickly to bag a baddy then manually switch back to first-person to deal with the next varmint: an irritation that all too often ends in death. In fact, there are times when you wish you could play the whole game from either a third-person or third-person viewpoint. 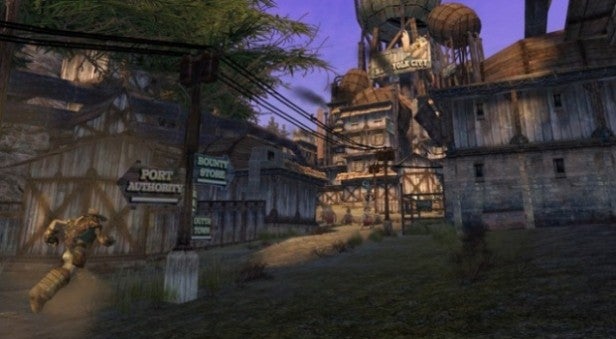 Meanwhile,  the game also has its share of lazy moments where you’re simply spammed with masses of enemies or hit by an excessively tricky boss battle. Plus, now that we expect our big action games to come with massive set pieces, Stranger’s Wrath can feel a little short on epic moments.

True, but when it all comes down to it Stranger’s Wrath feels fresher than you’d expect from a game nearly seven years old. It’s got a story to tell and a personality to tell it with, and what appears to be a simple and repetitive tale grows richer and more interesting with time. and each new location or outlaw gang gives you something different to look forward to; something that stems from Oddworld’s platform gaming heritage. 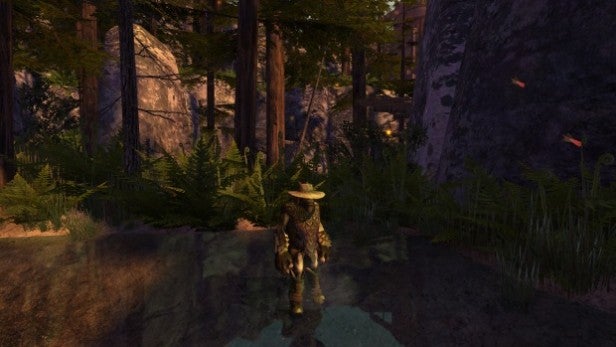 And for once, the HD remastering does the game justice. While it’s clear that Stranger’s Wrath isn’t a cutting-edge modern title, it’s a very polished interpretation of an old one, with reworked characters, textures and effects and new scenery, lighting and particle systems that add extra atmosphere to the original locations. The team at Just Add Water who handled this update deserve kudos for a job well done.

Verdict
Despite a fine HD remaster Stranger’s Wrath still isn’t a game for everyone. The Call of Duty crowd will find it too confusing, and there are moments where its different influences fail to gel. Yet this is a fantastic second chance to try a unique and innovative blend of genres, with a strong story, a winning personality and one of the most entertaining weapon sets ever used in a mainstream game. At £12.99 for such a rich single-player game it’s hard to resist.