Nowadays, it’s not uncommon to have an eight, 16, or even 32GB memory stick that you take everywhere with you so that your entire music collection, many of your pictures and a fair selection of videos, work files, etc are close at hand. However, when it comes to moving your files around, copying gigabytes of data over a USB connection can take a long time. Enter, then, the OCZ Throttle. 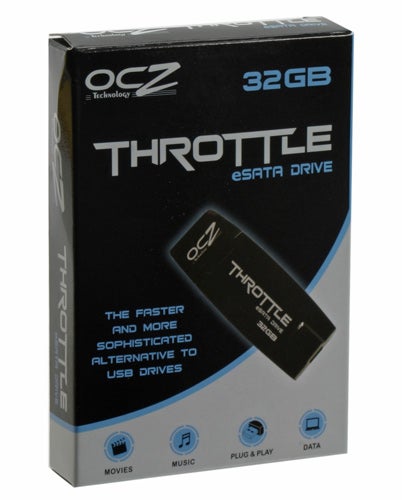 While it may look like any other USB memory stick, the Throttle has an eSATA connector, allowing for faster transfers to and from the stick. How much faster? Well, the maximum data rate of USB is theoretically 60MB/s but in most practical instances you seldom get much over 30MB/s and more often it will be around 25MB/s. In contrast, OCZ claims the Throttle can be read from at up 90MB/s and written to at 30MB/s. Okay, so the write performance may not be amazing but the increase in read performance is enough to colour us very interested. 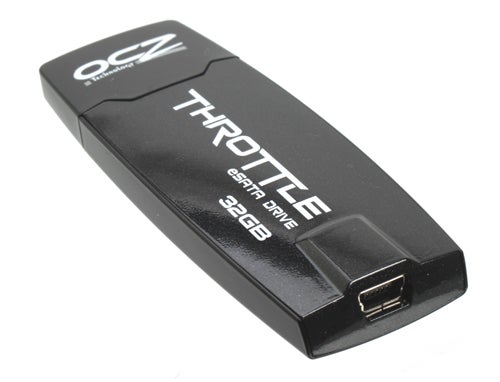 The stick comes in a modest little cardboard box along with a USB-to-miniUSB cable and that’s it. Given it’s essentially just a memory stick, this is hardly surprising or disappointing though. The miniUSB cable is used to provide power to the drive when it’s connected to a non-powered eSATA port and also for connecting the drive as a normal USB 2.0 drive for those situations where no eSATA port is available.


The need for this cable does highlight one of the Throttle’s problems. Namely, it’s somewhat annoying to have to carry around an extra cable with the drive, in case either of the above scenarios arises. There’s no particularly easy answer to this problem, except to have some sort of integrated USB cable like the Lenovo ThinkPad portable hard drive but this would add to the overall bulk considerably. It’s something we’d like to see OCZ experiment with, though. 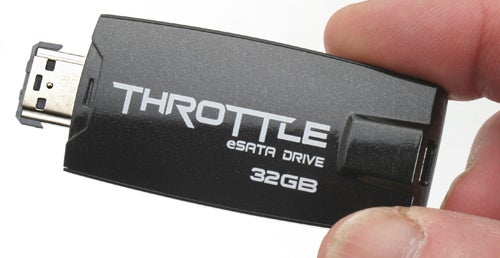 Another issue with this drive is its bulk (80mm x 20mm x 10mm) and in particular its width at its plug-end (18mm x 10mm). This can make it difficult to fit in alongside other peripherals that tend to populate the back panel of a computer. Further concern comes from the cap that covers the eSATA port as it’s untethered (and can’t be clipped onto the back) so will no doubt end up the same way 90 per cent of USB stick caps do – lost or discarded. One final point – more of an observation than a problem – is the drives lack of ruggedisation; it probably won’t handle exposure to water or the soul of a size 12 boot, too well. All told, there are certainly some design points that OCZ might want to address or incorporate in the next version.


For the most part, though, the mere prospect of nearly tripling transfer speeds will be all that concerns you so as such, let’s take a look at how the Throttle drive performs.

While there is potential to use this drive as the system drive for a computer (using it as the installation drive for freeNAS springs to mind) or using it as a ReadyBoost drive for Windows Vista, we feel it’s not really the kind of drive you should be using for such applications – there are plenty of small, low price, dedicated SSDs that are more suitable. Therefore we won’t be looking at performance under such conditions.


Instead, the key issue is how this thing holds up when it comes to file transfers. To test this we plugged the drive into our test bed using the eSATA connector and transferred video files (totalling 3.26GB) from the system hard drive (a Western Digital Raptor X) to the Throttle and timed how long it took. We then reversed the process and read the files from the Throttle and wrote them to the hard drive. We then repeated both tests three times (deleting the files and rebooting the PC between each run) to ensure each time was consistent. After this, we used the Throttle’s USB 2.0 connection and repeated all six tests.


Still, we wanted to be doubly sure its performance held up under more than one test with one data type, so we repeated the testing methodology but replaced the nine video files with 3,595 mixed files (including images, Word documents, Excel spreadsheets, and Powerpoint presentations) spanning 506 folders and totalling 3.11GB.

What’s immediately obvious is how much longer it takes to copy across many small files rather than a few large ones. This is something we’d expect to see, but we didn’t imagine the difference would be quite so dramatic. On top of this, the write test over USB absolutely skyrocketed, taking a whopping 5mins 56secs compared to just 2mins 44seconds over eSATA.

So performance is not only as good as we’d hoped; it’s actually better. The only other consideration, then, is the price and here OCZ is pretty competitive. While you can get 32GB USB flash drives for as little £50, most seem to be around £60, so we feel its excellent transfer speeds justify the £20 or so premium. Furthermore, if you don’t need quite so much as 32GB, the 8GB and 16GB models are available for just £27 and £45, respectively, so you certainly shouldn’t need to break the bank to get a high-speed portable storage device.


The OCZ Throttle may not be the most rugged or desirable-looking USB flash drive and nor is it the cheapest, but its addition of an eSATA port means that data transfer is much faster than most competing drives, so for that reason we recommend it.