Despite the best attempts of many an interested party, Secure Digital memory cards have become more or less ”the” de facto memory card format. CompactFlash remains popular among photographers, and Sony continues to soldier on with its mad variety of formats but in general Secure Digital has won out and the great majority of consumer electronics devices support it.


With devices becoming ever smaller, new SD memory standards have been created including miniSD and microSD which, as the names suggest, are smaller versions of SD cards, which are compatible with SD card interfaces via adapters.

To the untrained eye the OCZ Trifecta is just one of these adapters, but in actuality there’s a little more to it than that because it effectively combines microSD, standard SD and USB functionality into one SD card sized device.


Actual memory is provided by a 2GB 66x microSD card, which measures a tiny 11 x 15 x 1mm and weighs less than a gram. That card slips into the side of the SD card adapter, which most will be familiar with, and a plastic cap on the end can be removed to reveal a four-pin USB compatible connection which provides USB connectivity to create a standard USB Mass Storage Device.

This is useful on many levels. Since the actual memory is on a microSD card it can be used in any number of mobile devices, including mobile phones for music playback or media functions. The SD card adapter means it can also be used in devices that use SD cards, such as Digital Cameras and GPS devices and, finally, the USB interface means you’ll never be stuck for a way for getting that data to a PC. And, as if the convenience weren’t enough, the USB 2.0 interface should, in theory, be quicker. What more could you want?


Design wise everything is pretty simple; it is an SD card after all. The microSD card slips snugly into the side of the SD card adapter, while the cap that covers the USB connection is well fitted so it won’t fall off inadvertently. That said it’s somewhat inevitable that the cap will be very easy to lose. It’s a shame that OCZ didn’t adopt a flip back design like SanDisk did on its Ultra II Plus USB card.

The device is rated as having a 66X speed, and it’s worth explaining what this actually means in real terms. Curiously, this is based upon on the 150KB/s speed of a single speed CD-ROM. It’s one of these rather antiquated methods that often live on, even if the numbers mean very little to the Average Joe consumer.


In raw figures then 66X means 9,900KB/s or 9.9MB/s. If one is being very strict it ought to be 9.7MB/s because you should divide by 1,024 when converting kilobytes in to megabytes, but as far as users are concerned the difference is negligible since this is a theoretical figure and not a real-world one. 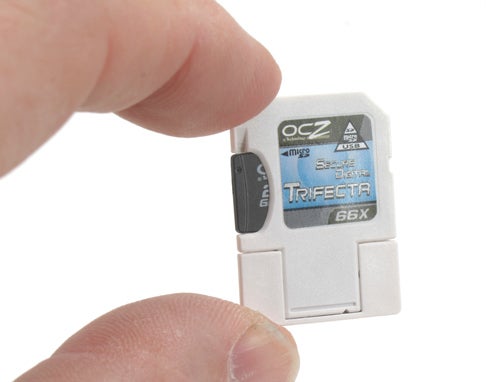 In any case the 66X rating makes this a very fast microSD card, one of the fastest in fact, and though it will never match the best SD cards, it’s still quick enough for most purposes and only the most demanding users will want more.


For testing we used a notebook running an Intel T7600 Core 2 Duo, 2GB DDR2 RAM and Windows Vista Ultimate. We ran two tests, a Large File Test and Small Files Test, testing both read and write speeds. Each test was run three times, and the system restarted and the card formatted prior to each run. We also ran the tests with the Trifecta inserted into the internal memory card reader and a USB 2.0 port, taking an average of three timings and converting them into MB/s. 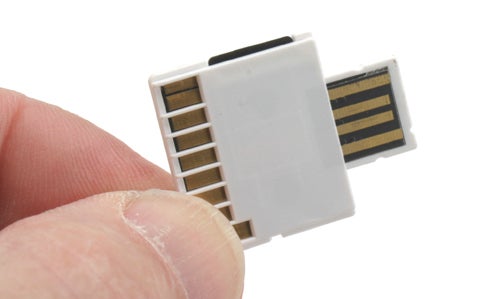 Similarly, the Small Files Test – 1.01GB of image, document and audio files in different folders – produced almost identical, albeit slower, results. Using the memory card reader the Trifecta averaged 1.36MB/s while in the USB port it averaged 1.38MB/s – the results are nothing if not consistent.


The read tests, however, showed a significant difference with the USB port connection proving to be vastly superior. In the Large File Test the Trifecta averages 3.44MB/s in the memory card reader, but managed 6.71MB/s when using USB.


In the Small Files Test the story was much the same, with average speeds of 3.51MB/s using the card reader and 6.76MB/s using USB. This provides another compelling reason for having the USB option, even if overall these results are solid rather than spectacular.


There’s little denying the usefulness of the OCZ Trifecta. At around £30 it may seem expensive for a 2GB memory card, but in truth it’s more than worth it for the adaptability and flexibility it gives you. If you’ve had enough of juggling different SD cards all over the place, this could be the solution for you.