OCZ’s Enyo brings together two exciting developments in the technology industry: SSD and USB 3.0. The first is an evolution of the traditional moving-parts hard drive to a non-magnetic form of storage that is silent, produces no heat, uses less power and is far more rugged and robust, not to mention a lot faster. The second is one of the fastest external connection standards around – if you want to know all the fine details, we would recommend you have a read of our comprehensive USB 3.0 article. 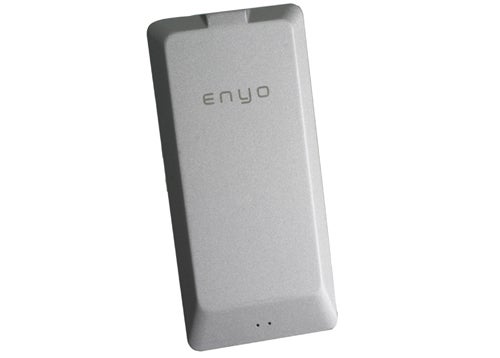 The Enyo incorporates various capacities of SSD, from 64GB to a whopping 256GB, into an anodised aluminium shell that’s almost Apple-esque in its minimalist attractiveness. We’ve taken the golden middle-road, going for 128GB, which will still set you back the not inconsiderable sum of £273.


Its metal casing gives the Enyo a reassuring feel and it weighs a portable 75g, though there is a slightly disconcerting rattle when you tap the drive or put it down. We imagine this is due to the spare room for the extra 128GB memory found on the highest capacity model, but it’s a shame as it detracts from the premium feel. 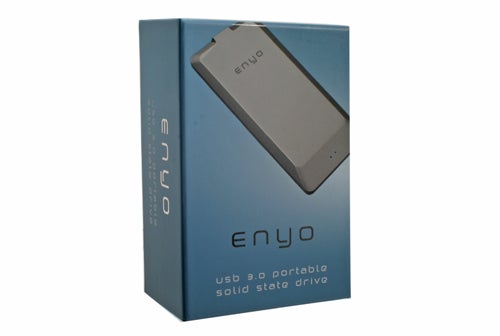 As already mentioned, its design is where the Enyo really shines, with tapered edges that lend it a sleek, minimalist appeal. It’s among the best-looking storage devices we’ve come across (even if the aluminium casing reveals a few screws at its base), though this is easy enough considering design is rarely a primary concern for storage. Two tiny and flush blue status LEDs indicate power and activity, and the Enyo’s single connector is an incredibly slim MicroUSB 3.0 port (the first of its kind we’ve seen) which provides both power and data connectivity.


OCZ takes further inspiration from Apple in the attractive packaging, and the provided data cable is also white rather than the more common black or blue. It’s ugly compared to the device, though, as the plastic plug at the Micro-USB 3.0 end is actually taller than the drive you’re hooking it up to! 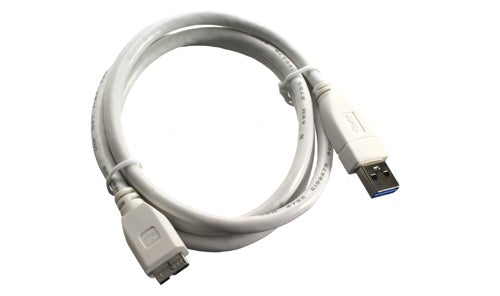 Ironically, considering its design makes it the ideal Mac partner, we wouldn’t recommend buying this device if you’re an Apple user because it will be limited to USB 2.0 speeds. There are some laptops beginning to ship with USB 3.0, however, and USB 3.0 is backwards compatible for those occasions when it’s not available.

Though the recent SandForce SSD controller is the new industry darling and offers unrivalled performance, the Indilinx controller used by the OCZ Enyo is still one of the better controllers on the market in our experience, with consistent, proven operation and full TRIM support whether you’re using Windows 7 or an older OS.


Sporting 64MB of cache on board, the Enyo range uses MLC Flash and offers some good speeds, starting off at an impressive 225MB/s read and more pedestrian 135MB/s write for the 64GB model. Our 128GB drive pushes this up to 260MB/s and 200MB/s respectively, which is excellent and beats any SSD we’ve previously looked at, though keep in mind that the quoted figures are generally theoretical maximums under ideal conditions. Sustained write speeds also see a dramatic difference, going from a slightly pathetic 40MB/s on the smaller drive to 150MB/s on the 128GB drive. Speeds on the £570 256GB model are identical, so our 128GB Enyo hits the sweet point between performance and value.


With theoretical figures out of the way, what’s the actual performance like? Considering this drive is most likely to be used as a glorified memory stick rather than a boot drive (though that’s certainly an option), we measured read and write performance when copying files onto (write) and from (read) the Enyo using our test system.

With a single large file, this OCZ SSD showed off its strengths. Performance better than tripled from USB 2.0 to USB 3.0, and perhaps more importantly, it significantly outperformed OCZ’s own Throttle over eSATA. Considering that, if anything, eSATA holds a very small bandwidth advantage over USB 3.0, this superior performance is completely due to the SSD compared to the Throttle’s ‘ordinary’ memory.

With a smaller selection of random files though, the Throttle just about pipped the Enyo to the post. To be honest the difference is negligible, but considering the latter’s price it’s slightly disappointing. Read performance with large files is where USB 3.0 really makes its advantages over its predecessor felt, and again the Enyo performs like a champion.

However, as the earlier comparison with the Throttle highlighted, OCZ’s highest-end external storage really is a niche product for the well-heeled. At £273 it’s more expensive than OCZ’s own SandForce-based Vertex2 internal SSD, which for £30 less should outperform it across the board in real-world scenarios.


To our minds, the only really viable scenarios for this drive are either when wishing to share a single boot drive between two computers, like a laptop and desktop (obviously both equipped with USB 3.0); or if you need an external memory stick with fast performance. In the latter case it’s not such a bad value proposition, as a ‘plain’ eSATA memory key of the same capacity will set you back around £230. However, even then there’s the size advantage of the average memory stick to consider, not to mention not needing to carry around a separate (ugly and thick) cable.


An attractive and extremely fast external hard drive, the Enyo’s speed and portability are its two main plus points. It’s something of a niche product due to its price, but if it fits your needs it’s a decent choice.