OCZ makes some bold claims about its 4GB PC2-6400 ReaperX memory. It states that this 2x2GB kit offers ‘high frequencies and aggressive bandwidth for maximum system stability. Rated at DDR2-800 with 4-4-3 timings, the PC2-6400 ReaperX provides exceptional latencies for the extreme enthusiast and gamer.’ Well there’s plenty to get our teeth into there but let’s start with the cosmetic looks of the memory and the construction of the heatsink. 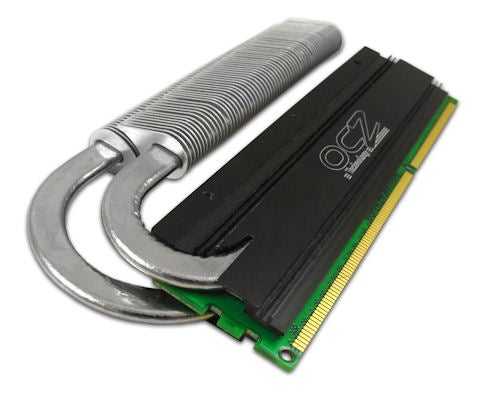 We’ve previously been impressed by OCZ Reaper HPC (Heat Pipe Conduit) memory. Reaper modules lift a secondary heatsink above the main PCB using a small tubular copper heatpipe that is clamped between the two heat spreaders. This results in a convoluted heat path that leads from the memory chips to the heat spreaders, on to the heatpipe and thence to the secondary heat sink. And that must be good because it’s rare that I get to say ‘thence’ in a review.


ReaperX shortens the heat path by clamping a broad flat copper heatpipe directly to each bank of memory chips using the two halves of the heat shield. These heatpipes run across the module of memory and then bend around through 180 degrees to run back across the top of the memory. These upper sections carry aluminium fins to dissipate the heat so the heat goes directly from the memory to the heatpipe and on to the air inside your PC case in a surprisingly effective way. In fact the memory consistenly hovered around 35-40 degrees Celsius, which is mightily impressive. 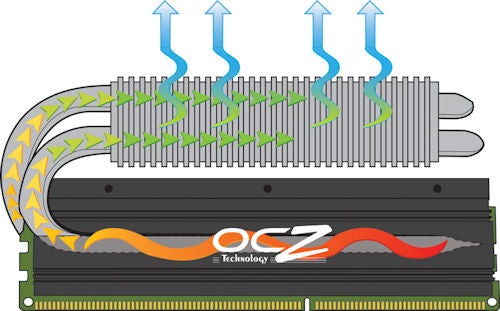 It’s worth pointing out that the two heatpipes don’t join together even though it appears that they do in the photos. When you install the memory it’s important to be careful as it’s all too easy to press on the delicate heatpipes rather than the body of the module and cracking the heatpipes would render them useless. The other downside to the design is that the heatpipe system makes the modules rather thick so you can’t populate two adjacent memory slots. As most motherboards have four memory slots you’ll be limited to installing a pair of modules in two of the slots which might be a problem with a 2x1GB memory kit but it’s unlikely to cause you a problem with this 4GB kit unless you are determined to have 8GB of RAM in your new PC.

To test the OCZ PC2-6400 memory I used the same system that I’ve used on a number of occasions including our recent review of a 4GB kit of GeIL Evo One memory.


The motherboard is an Abit IP35 Pro with P35 chipset, the processor is a Core 2 Quad Q6600 that has a stock speed of 2.4GHz on a 1,066MHz Front Side Bus (FSB) and the build is finished off with an MSI NX8800GT graphics card and a Hitachi 7K1000 hard drive all running on 64-bit Windows Vista Ultimate Edition.


The 800MHz effective speed of the OCZ memory gives the test system plenty of headroom when the system is running on the standard 266MHz FSB and it’s also sufficient if you have a 333MHz/1,333MHz FSB. Once you start overclocking you’ll rapidly hit 400MHz which is the true operating speed of the memory.


To hit that effective 800MHz speed you’ll need to increase the RAM voltage from 1.8V to 2.1V which is what you’d expect with fast DDR2. If you have a suitable Nvidia chipped motherboard and plan on using Enhanced Performance Profiles (EPP) you’ll need to increase the voltage to 2.2V in which case OCZ states you get fast latency timings of 4-4-3-15. Increase the clock speed past 1,000MHz and the latencies slow to 5-5-5-18. That’s interesting as it suggests you should be able to aim for a 500MHz FSB with confidence. 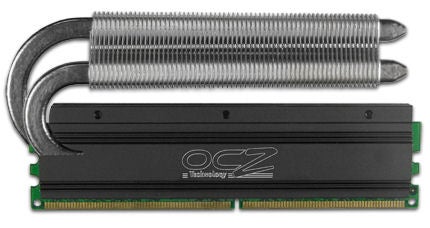 We gave the OCZ memory an initial run at default speeds and voltages. The result was slightly lower performance than the GeIL Evo One memory as the latencies for the OCZ were 6-6-6-18 compared to 5-5-5-18 for the GeIL. For the next step we left the FSB untouched and raised the CPU, RAM and Northbridge voltages and then increased the memory multiplier to achieve a stable speed of 1,088MHz. That helped performance by a modest amount but we saw that the latency figures remained at 6-6-6-18.


Overclocking the FSB to 380MHz gave an extra 1GHz of CPU speed and a healthy amount of performance with the memory running at 912MHz. With a bit of trial and error we pulled the latencies down to 5-5-5-18 which helped performance by a tiny amount but there was no way the EPP latencies of 4-4-3-15 were going to work on the P35 chipset.


As a final flourish we raised the memory multiplier from 1.2x to 1.25x to edge the memory speed from 912MHz to 950MHz. Once again this helped performance but only by the tiniest amount.


Although we didn’t see the latency figures that OCZ proclaim on the product page for the PC2-6400 we did get very healthy performance and we had no problem running the memory above 900MHz when we overclocked the FSB. And, upping the memory multiplier on the standard FSB speed meant the memory came close to a speed of 1,100MHz. That’s considerably faster than the rated speed of 800MHz and also faster than the GeIL and as the OCZ is cheaper it’s well worth our recommendation.

The rated speed of the ReaperX memory is none too impressive but in practice it overclocks like a dream and delivers stacks of performance at a very fair price.