If the Oculus Rift S is an evolution over what has come before it, at this point it looks set to become VR's apex predator. This is one to watch.

Rarely do we see evolution as rapid or as radical as we’ve seen in the area of virtual reality. Oculus Rift’s consumer version launched in 2016, and just three years later we’re seeing the Oculus Rift S, with evolutionary improvements so drastic that it will consign the original Rift to the history books – or, more likely, the bin.

With inside-out tracking, more simple connections and a bunch of cool tweaks, our first impressions of the Oculus Rift S are overwhelmingly positive.

The Oculus Rift S release is stated as spring 2019. It’s spring 2019 right now, so expect to find out more on an exact release date sometime in the near future.

When it does make it to stores, you’ll be able to pick it up for just £399 in the UK. That’s the same as the Oculus Quest and only £50 more than the current price of the Oculus Rift, the model the Rift S is replacing. At that price, it’s far more palatable than the £700 or so the Rift originally commanded at launch. The minimum specs for the Oculus Rift S are below. You can get these from the Oculus website. These will dictate the sort of games that you can run, but because the Rift S gets its grunt from your PC, these are a minimum to even get it to work properly.

From the chart above, you can see that the Oculus Rift S has moved from the HDMI to DisplayPort; otherwise, things are largely the same. The Nvidia 1050TI is an affordable graphics card in the current climate, although as is the case with all PC gaming, a step-up card will often offer better performance, especially if you’re looking to future-proof yourself and play the latest games, both in and out of VR.

Oculus has dropped the refresh rate on the Rift S from 90Hz to 80Hz, reportedly to keep the minimum spec requirements in line with those of the original Rift.

The Rift S is getting a resolution bump, too: 1280 x 1440 per eye, using the same fast-switch LCD screen used in the Oculus Go. It’s also using the same lenses as the Oculus Go, although the experience is likely to be significantly different with a high-end PC in the driving seat.

The big feature is the inside-out tracking. The Oculus Rift S has five sensors on the headset that will do all of the tracking for you, without a single sensor anywhere in sight. 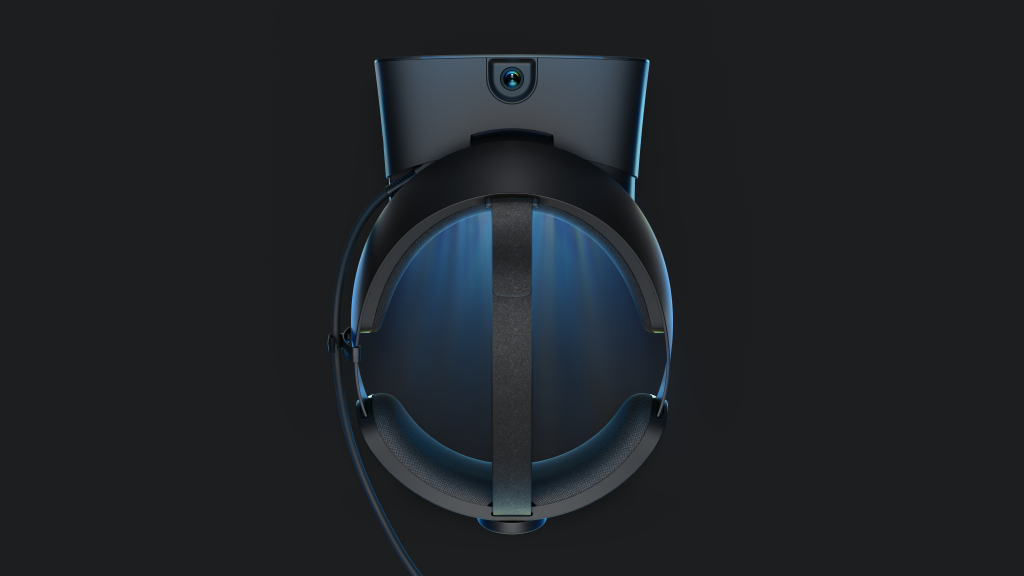 The Oculus Rift S has some very nice usability features, inspired both by the involvement of Lenovo and also the past few years of virtual reality development.

A favourite is the halo-style strap, so named because it sits on the top of the head during use like a halo. It will be familiar to those familiar with Sony’s PlayStation VR headset; the use of a halo-style strap means the device should fit comfortably on your head, and it supports the weight a little better, too.

Another bonus is that because the halo apparatus is holding on to all of the kit, it can be adjusted easily, making it better for users who wear glasses. There’s a slider on the right side of the headset that brings your physical lenses forwards and backwards, enabling you to fine-tune the fit.

I played the forthcoming title Asgard’s Wrath, spending a significant amount of time in the game’s combat arena. This involved a lot of desperate fighting, quick movement and, honestly, a high tolerance for decapitating draugr soldiers.

Crucially, playing this game requires precise control – something I’ve struggled with in virtual reality in the past; at 6ft 7in, I’m a very big guy. There are times I can block line of sight from the base station to the touch controllers with my bulky body. Or, because of my height, I have to choose between dropping out of sync when I’m standing at full height, or when I duck down to the ground. With the inside-out tracking, all this is handled from inside the headset.

Here, the tracking didn’t miss a beat as I attacked, parried, dodged and even tossed myself to the ground a couple of times – the tracking kept up. Tethering yourself to a computer still feels a little annoying, but it’s a weird behavioural problem now rather than anything technical. This is about an unobtrusive as tethered VR can get.

The Rift S is lightweight but rigid and I didn’t feel any discomfort wearing the device. This is a million miles away from the experience of using an Oculus Rift CV1, and since it’s affixed to the halo instead of your face, you don’t get the infamous VR goggle eyes.