The Oculus Quest 2 is the absolute best VR headset you can buy, with a fantastic wireless performance and improved screen resolution ensuring a best-in-class experience.

The Oculus Quest 2 is the second generation of the VR heavy-weight’s stand-alone headset, arriving just a year after the original.

The original Quest headset was such a huge success – even winning our own ‘Product of the Year’ accolade – that it was difficult to see how Facebook could improve upon the very best VR headset we’ve ever tested.

Well, I’m happy to say my initial assumption was wrong. The Oculus Quest 2 is an outstanding device, featuring game-changing upgrades such as a beefed-up performance, a higher screen resolution and more comfortable design. What’s more, its also had a whopping £100 price cut from the original Quest.

The Oculus Quest 2 isn’t just the ultimate VR headset, it’s also a genuine gaming alternative to the PS5 and Xbox Series X. You’ll need a fair bit of free floor space (6.5 x 6.5 feet recommended for room-scale) to experience the full potential of the VR headset, but shifting around your coffee table is well worth it.

The Oculus Quest 2 will hit stores back on 13th October and is available to buy right now. 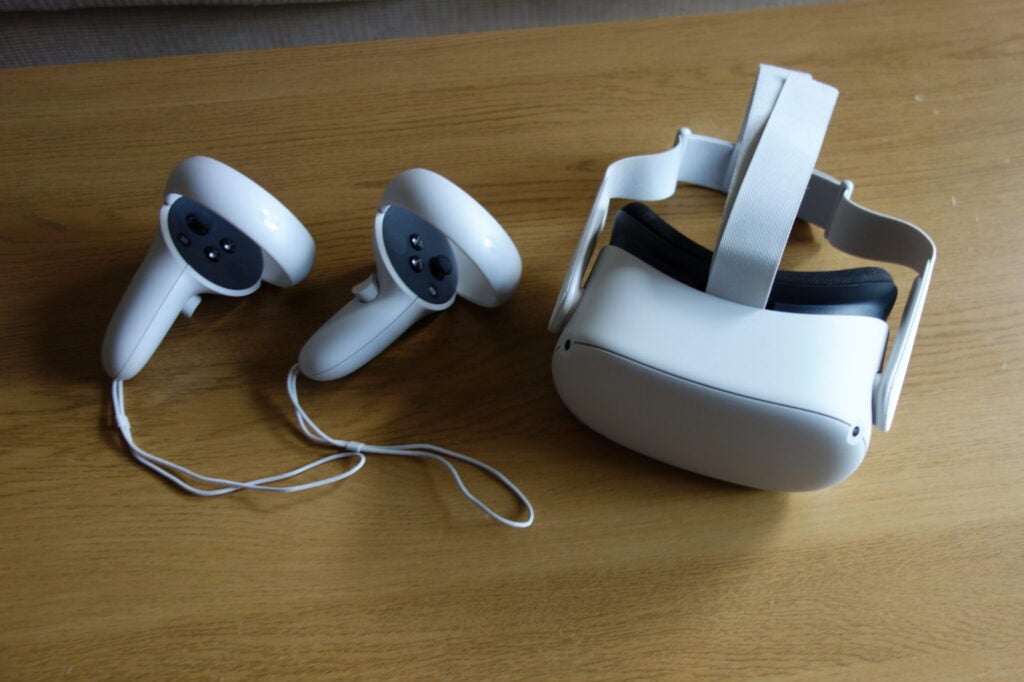 The Oculus Quest 2 is more powerful than its predecessor, featuring a Qualcomm Snapdragon XR2 processor and 6GB RAM. That’s still mobile-grade performance, so don’t expect the new Quest to be able to run more demanding games such as Asgard’s Wrath and Half-Life: Alyx without being plugged into a gaming PC.

However, there’s still lots of great games than can run on the Quest, with the extra grunt ensuring a smoother performance and generating more pixels to take advantage of the 1832 x 1920 per-eye resolution – that’s a higher pixel count than the more expensive Vive Cosmos and Oculus Rift S VR headsets.

In-game worlds immediately look sharper, making it more difficult to see those immersion-shattering screen door effects. The odd game, such as Thumper, still sees a bit of pixelation among all the hypnotic visual effects, but the likes of Beat Saber, Robo Recall and Tetris Effect all looked outstanding with bright colours and clear detail.

The Quest is also capable of plugging into a gaming PC via the Oculus Link cable (sold separately for £89), which is basically just a 5-metre USB-C to USB-C connector. You have to make sure your gaming PC or laptop has a USB-C port, but if it does you’ll gain access to a huge library of VR games that are too demanding for the Quest when operating independently. Asgard’s Wrath looked incredible with the Quest 2, with a flawlessly smooth performance.

That performance will only get better too, as Oculus will be upgrading the current 72fps cap up to 90fps post launch. It will be up to individual game developers to support the increased refresh rate, but those that do will benefit from smoother motion and a reduced likelihood of causing motion sickness. 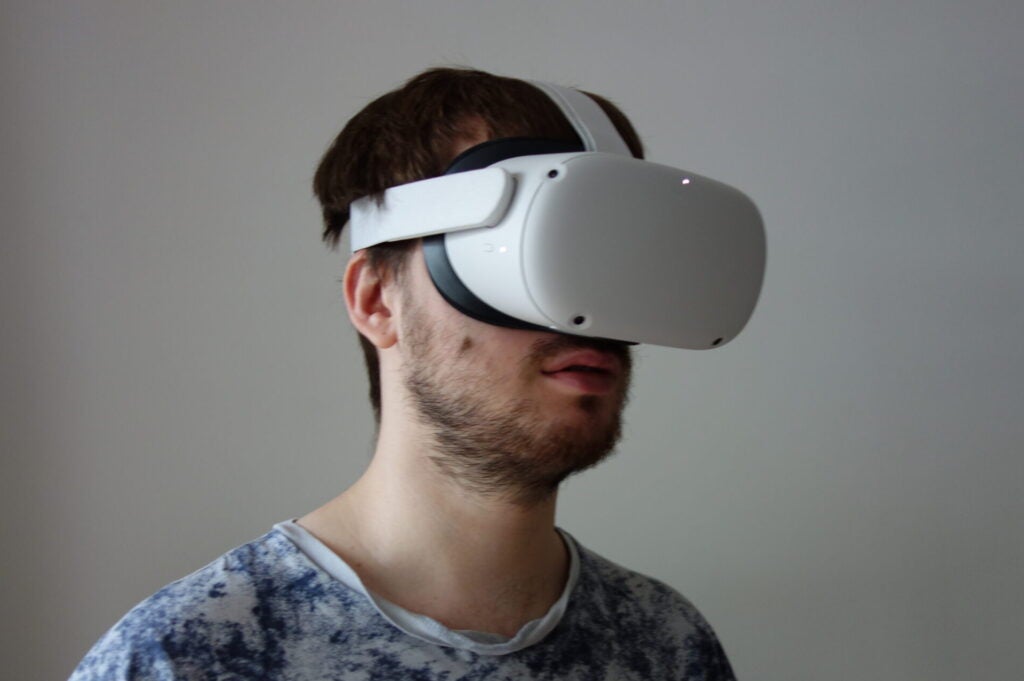 Oculus has also cranked up the max storage option to a whopping 256GB, which is twice the size of the counterpart configuration of the previous headset. The base model is still stuck at a 64GB capacity but I don’t think that’s a major issue. Most games and applications take up less than 1GB of space, while Robo Recall is the most demanding at just 3.51GB.

Like its predecessor, the Oculus Quest 2 features inside-out tracking, which means it can track your movement without the need of external sensors. It’s surprisingly accurate too, with even the slightest head turn registered with pin-point accuracy. I still can’t get over how easy this headset is to set up – literally pull it over your face and you’re good to go.

There are two options of play: roomscale and stationary. The former offers the best experience by far, allowing you to move around and dodge incoming enemy attacks, but not everyone has the required 6.5 x 6.5 feet floor space for this. Fortunately, most games support a stationary mode so you can still play even if you’ve got limited space. In-game boundaries pop up if you do come too close to a collision, preventing you from smashing into a wall or a television. 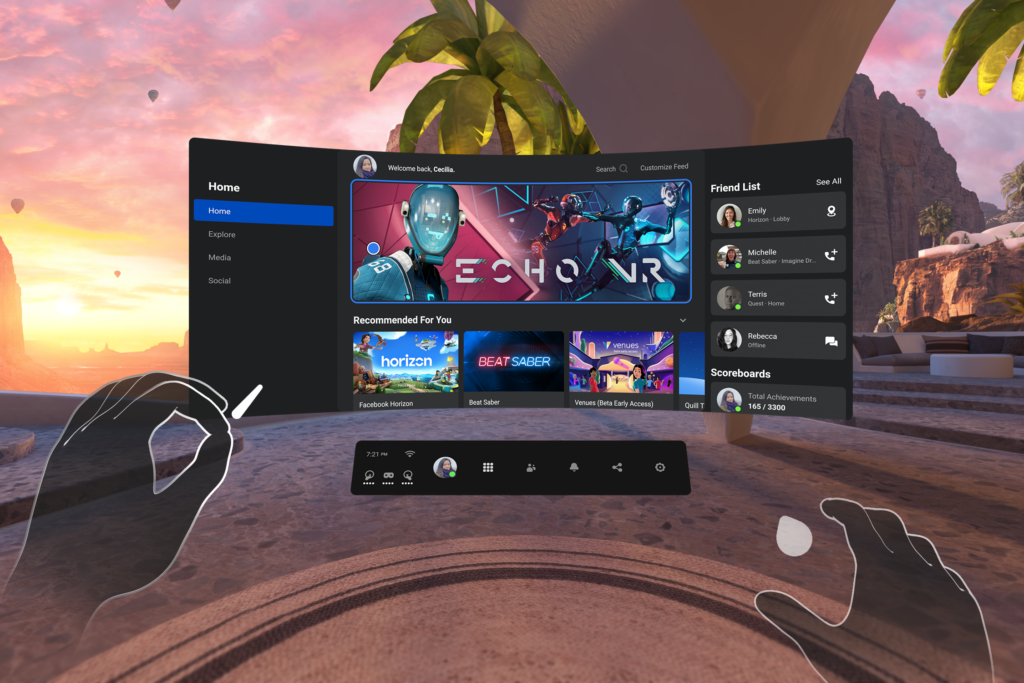 The Quest 2 also supports hand tracking which means you don’t need the bundled controllers to play select games. The technology here is incredible, and feels like next-gen wizardry, but it’s not quite accurate enough for a seamless experience. I recommend sticking to controllers for now, but the prospect of being able to use your hands is certainly exciting.

The only area that Oculus hasn’t improved substantially is the battery life. The headset lasts just over 2 hours of game time (and around 3 hours for video content) which is more or less the same stamina as the original headset.

You can technically keep playing with the headset plugged in to a power source, but the bundled charging cable is far too short. You could buy your own USB-C to USB-C charging cable (the Oculus Link cable is a good shout), but it feels like a needless extra expense.

The Oculus Quest 2 initially doesn’t look hugely different to its predecessor, other than the new white paint job that Oculus hopes will draw in a wider audience. Oculus claims there are no current plans to release alternative colour options, but also said, “never say never.”

Take a closer look at the Quest 2 and you’ll notice a couple of subtle design tweaks. It’s now slightly smaller and 10% lighter than the original headset. It can still cause your head and neck to ache after extended use, but the trimmed-down design is still very much welcome. 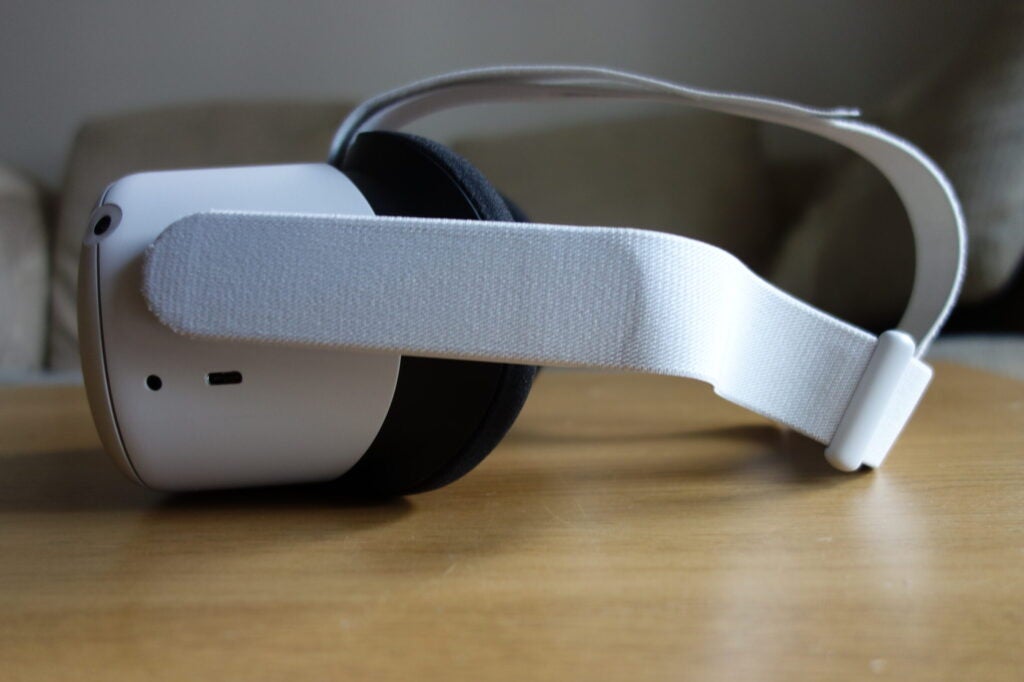 The strap has also seen a couple of changes, as there’s now only one velcro clasp, ensuring you don’t need to make as many alterations when swapping between players. The elastic straps accommodate for various shapes and sizes of heads, although Oculus will also be selling strap accessories for those who can’t find a good fit with the default design.

Two speakers are built into the sides of the headset, and can be cranked up surprisingly loud. Detail is fairly impressive and the positional audio helps you to determine exactly which direction gunfire and approaching footsteps are coming from. The built-in speakers do suffer a little with bass-heavy music and sound effects, but you can plug in some headphones via the 3.5mm jack to remedy that. Unfortunately, there’s no support for Bluetooth headphones. 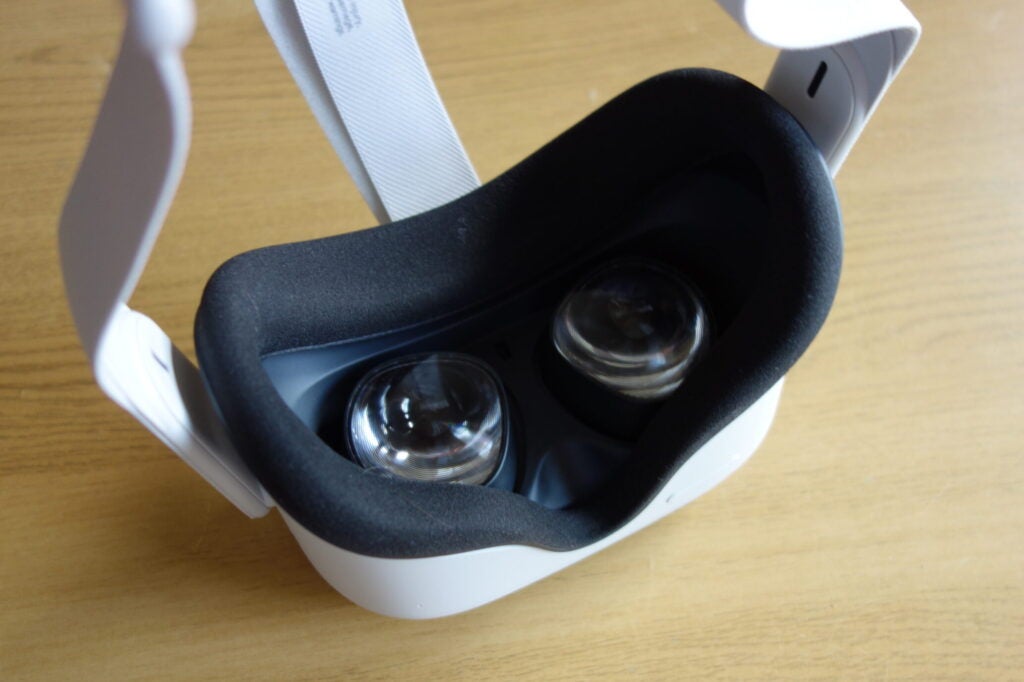 The only other port on the headset is the USB-C slot for charging. There are very few physical buttons on the headset, with the volume control found on the underside and a power button built into the right.

Previous Quest owners will notice there’s no physical IPD slider. Instead, you can just pull on the eye cups to toggle between three preset positions. I personally found the default setting perfectly comfortable, but it’s still good to see Oculus allowing for some customisation.

Oculus claims it has “completely redesigned” the Touch Controllers, although I can’t see many major changes from the previous pair. 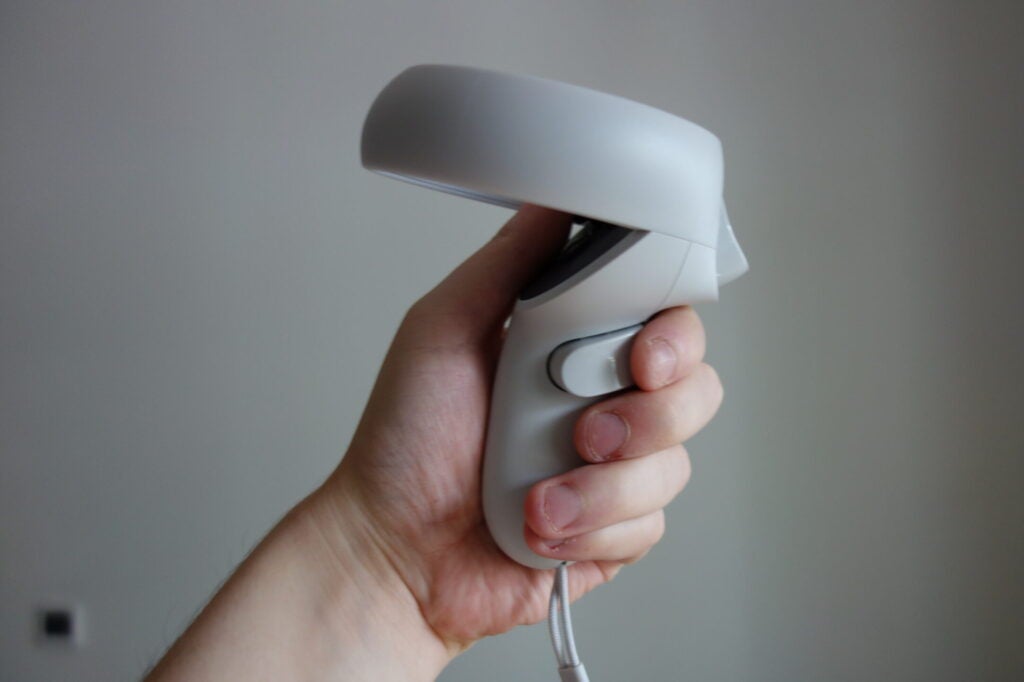 That’s no bad thing though, as the Touch Controllers are fantastic. The button placement smartly helps to simulate real-life hand movements, such as squeezing a gun trigger, giving your friends a thumbs up or catching a ball. The buttons feel great to press too, and are all easy to reach.

I am a little miffed that the controllers still use AA batteries rather than being rechargeable via USB-C, but the batteries come pre-installed and last for ages – I’ve been playing on the Quest for countless hours so far, and the controllers are showing no signs of running out of juice. 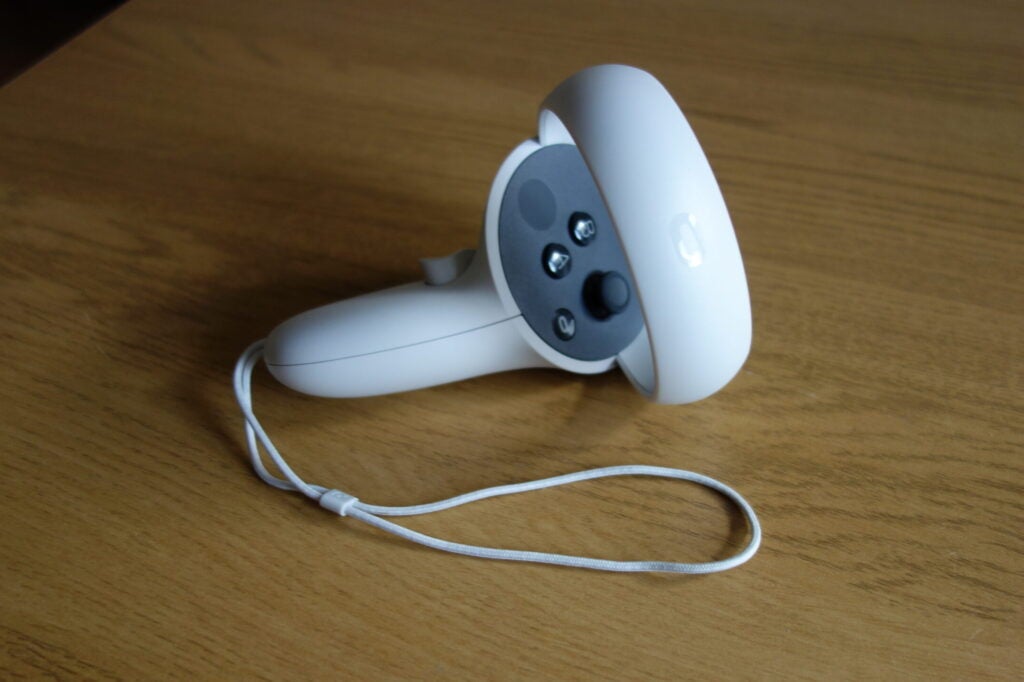 The controllers also turn on as soon as you don the headset. Previous VR experiences have been an absolute pain to set up, forcing you to turn on every device individually, so having all the Quest hardware spring into action simultaneously makes the whole process significantly easier.

Games and apps – An ever-growing library of fantastic games

The Oculus Quest 2 has access to all of the same games and applications as the original headset – what’s more, all of your purchased software should transfer over with your profile if you’re upgrading.

The original Quest had a superb line-up of games when I reviewed it back in 2019, including Beat Saber, Moss, Robo Recall and Superhot VR. It was a delight to revisit these gems, particularly Beat Saber which has only got better thanks to the new music packs from the likes of Green Day, Imagine Dragons and Linkin Park.

Since 2019, an abundance of new games have arrived on the platform, resulting in an even broader library with pleasingly varied experiences that will appeal to people of all ages. 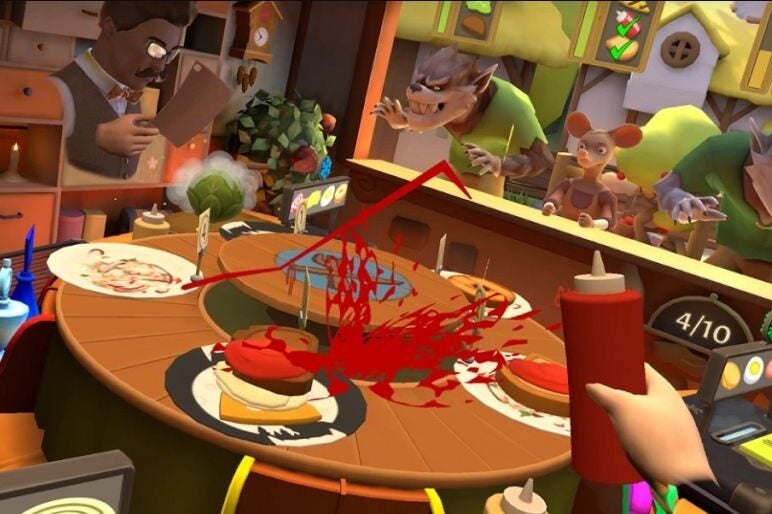 The Walking Dead: Saints and Sinners will scratch that zombie-slaying itch, Cook-Out is a scrumptious cookery co-op venture and Pistol Whip is an addictive rhythm-based shooter. You’ve also got the amazing Echo VR, which is essentially PvP online multiplayer volleyball in zero gravity. It’s a surreal experience, and one of the best showcases of VR’s potential.

And if that’s not enough, if you’ve a gaming PC / laptop with a USB-C port, you can buy the Oculus Link cable in order to play games such as Asgard’s Wrath and Lone Echo. It’s even possible to access SteamVR, which means the likes of Half-Life Alyx and Skyrim VR are on the menu.

I’ve got no concerns that the well of game releases will dry up either, as Oculus has revealed new Assassin’s Creed and Splinter Cell VR games will be arriving and will be “created from the ground up exclusively for the Oculus platform”. 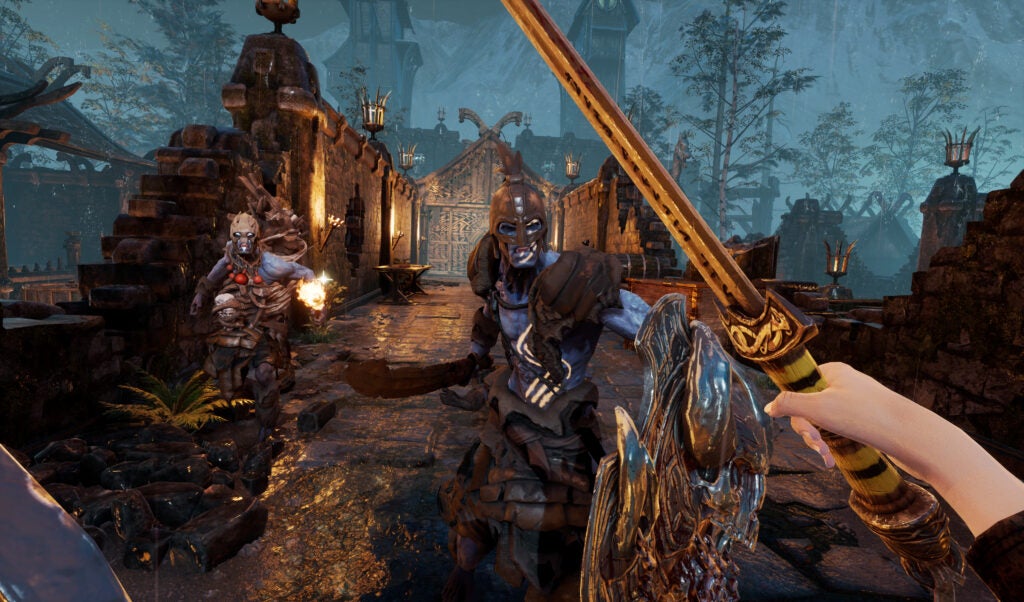 There are plenty more games arriving in the next couple of months too, including Jurassic World Aftermath, Rez Infinite and Warhammer 40,000: Battle Sister. You could comfortably argue that the launch lineup is even stronger than what PlayStation and Xbox have on offer.

And while the Oculus Quest priority is unquestionably gaming, there are also plenty of social-based experiences, fitness apps and video content from the likes of Oculus TV and YouTube VR. Rec Room is one of the standout social apps, allowing you to meet up with your friends, customise your own in-game hubs and challenge them to various games including paintball and laser tag.

There is one big caveat though, as Oculus now requires you to log into your Quest with a Facebook account. That could understandably be a deal breaker for you, but Oculus argues this move will allow them to take advantage of Facebook features such as messaging, live streaming and events. The upcoming Facebook Horizon app will also provide a new way to hang out with your friends in VR in the future, but it’s currently unknown when this will launch.

You should buy the Oculus Quest 2 if…

You shouldn’t buy the Oculus Quest 2 if…