We’ve recently been looking at a number of circa £700 gaming PCs, including the Advent CBE140 and the Scan 3XS i3 OC, and the latest to pass through our office doors is the intriguingly titled OverclockersUK (OCUK) Titan Xenomorph AVP (Alien Versus Predator). Let’s see how it fares. 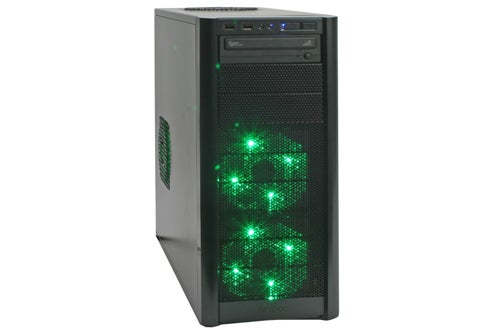 Arriving in the usual padded cardboard box – though not as well padded as some – we were pleasantly surprised at the inclusion not only of the motherboard and graphics card retail boxes containing all the usual driver discs, but a retail version of BullGuard Internet Security 2010. On top of this there’s also the eponymous copy of the new Alien Versus Predator game as well.


The PC itself is a relatively light affair, housed in the plain but not unattractive Antec Three Hundred, which we last encountered in our review of the Wired2Fire HellSpawn ALC. OCUK has decided to add a little unique visual appeal by giving the Titan Xenomorph’s front and top fans “alien” green LEDs. It’s certainly an unusual choice and I must admit I would prefer blue, especially since the case’s power and activity LEDs still remain this colour.

Front connectivity is rather limited with just headphone and microphone jacks and two well-spaced USB ports, along with a large power button and recessed reset button. These sit above the simple OCUK-brand DVD-rewriter, which leaves two external 5.25in bays free. 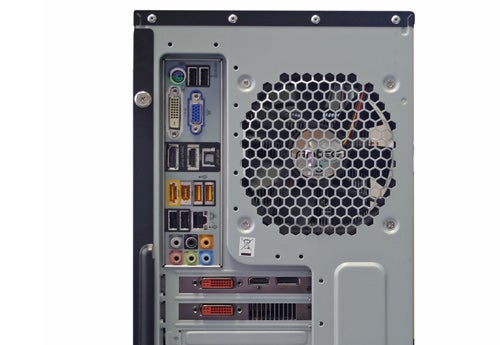 There’s plenty to get stuck into on the rear though, with a further six USB 2.0 ports (unfortunately no sign of USB 3.0, but that’s hardly unexpected), FireWire, a PS2 port and eSATA for data, plus digital and analogue 7.1 surround sound outputs. Thanks to the motherboard being based on Intel’s H55 chipset you’ll also find a comprehensive selection of video outputs, but these are made obsolete by the AMD/ATI Radeon HD 5770 graphics card, which has twin-DVI, HDMI and DisplayPort connections. 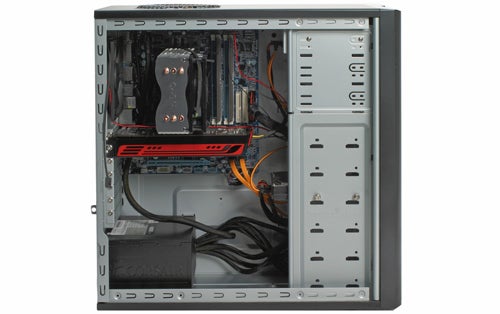 Opening either side panel is simple, requiring removal of just two thumb screws. Inside, the build is reasonably neat but that’s only because it’s a simple configuration, since minimal effort has been made at cable tidying – this is definitely a point where most competitors do a better job. A particularly poor touch was that one loose cable was just about touching the top fan, which we luckily noticed before switching the machine on. Overall though there’s no major complaint here and air-flow is certainly not impeded.

The PC is cooled by a configuration of two 120mm front fans (protected by washable air filters), another 120mm fan at the back and a 140mm one at the top. As only the rear fan is an Antec Three Hundred case original, it’s the only one to retain a three-speed fan control switch that was unnecessarily set to maximum on our sample. 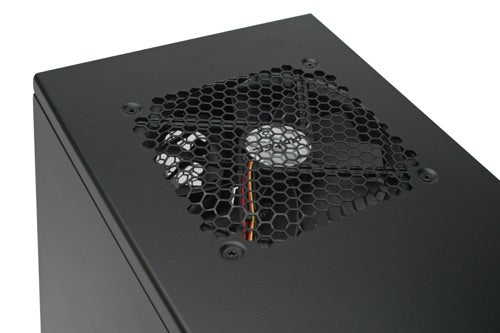 On the inside the Three Hundred is basic at best, with no tool-free drive retention systems or other special features, though at least there are no sharp edges. OCUK has occupied one of the six 3.5in bays with a 1TB Samsung SpinPoint F3 hard drive, which is among the faster hard drives around. It’s secured using two grommet-less thumbscrews.


The rest of the components are nestled in the Gigabyte H55M-UDH2 micro-ATX motherboard, which as the name suggests uses Intel’s H55 chipset to provide video outputs for compatible Core i3 and i5 Clarkdale processors sporting an embedded graphics chip. Of course, you can slot in any socket 1156 CPU, making the setup quite flexible and future proof. Since a Core i3 is used here, another advantage is that if your video card ever gives you problems you can fall back on the integrated solution. 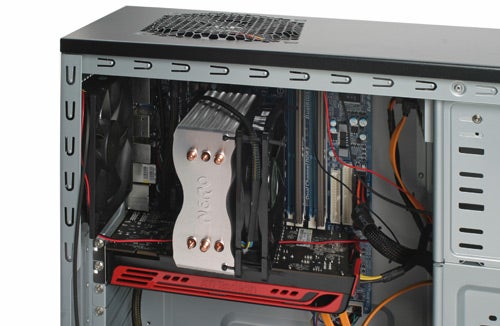 One of the highlights of the Titan Xenomorph AVP Edition is its overclocked processor. The dual-core Intel Core i3 530 CPU usually runs at a stock 2.93GHz, but is here overclocked to 4GHz – a speed that’s becoming pretty much standard on overclocked machines and is certainly plenty for even the most CPU-intensive games, though many titles are starting to take advantage of more than two cores. 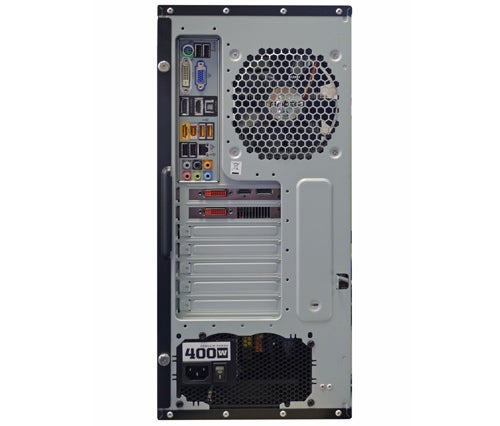 Unlike many other gaming desktops we’ve looked at recently, this overclock is achieved using air rather than water-cooling. An Akasa AK-967 V2 Nero CPU cooler does an excellent job though, keeping both cores consistently below 23 degrees even under load. The turbo-charged CPU is backed by the usual 4GB of DDR3 RAM, in this case twin sticks of 1,600MHz Geil Value memory with attractive black heatsinks. With a clean install of Windows 7 64-bit every bit of this will be taken full advantage of.

Naturally the graphics card is the most interesting part of any gaming PC, and OCUK has chosen the XFX ATI Radeon HD 5770 Alien Versus Predator Edition (this doesn’t mean the video card is going to violently burst out of your PC in a mess of cables; it just means you get a copy of the game included). Unfortunately, while a great performer for its price of just over £100, the 5770 is not the ideal card for a PC costing over £700. 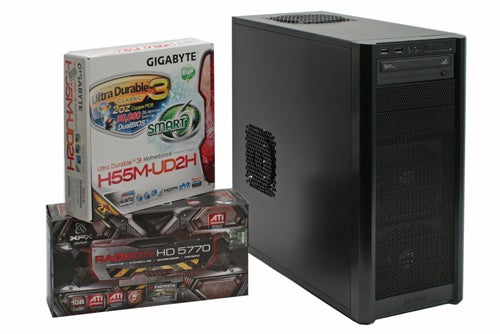 That said, the Titan Xenomorph AVP Edition tramples older and less demanding games into the dust, achieving a respectable 62.8fps average in Stalker: Call of Pripyat at maximum detail. It’s in demanding fare like Crysis that the card starts to struggle though, as 1,920 x 1,200 was barely playable at High Detail and to enable a smooth experience on Very High Detail we had to drop the resolution down to 1,280 x 960.


Nor will you be able to add a second graphics card despite the motherboard’s free 16x PCIe slot, because in CrossFire mode this second ‘graphics card slot’ only runs at 4x – not that the non-modular 400W Corsair CX PSU gives you too much lee-way for high-powered card setups in the first place. As far as other free ports on the motherboard go, you get several headers (USB and FireWire), three free SATA ports and a single PCI slot.

So how does the £752.98 Titan Xenomorph AVP Edition hold up to the competition? In fact it doesn’t do too badly, as component prices have risen significantly recently. Before, the Scan 3XS i3 OC offered an almost identical specification (with a smaller hard disk and cheaper case but a Blu-ray drive) for almost £60 less, and was slightly better built to boot.


However, it has since gone up to £729.85, leaving a price difference of around £20. If you upgrade the 3XS i3 OC’s case to an Antec Three Hundred as well, the gap narrows to £10, and at this stage it really comes down to whether you prefer the Scan’s Blu-ray capabilities and superior cable tidying or OCUK’s included game, green lighting and larger hard drive. Throw in Scan’s better warranty, however, and the 3XS wins out as far as we’re concerned. 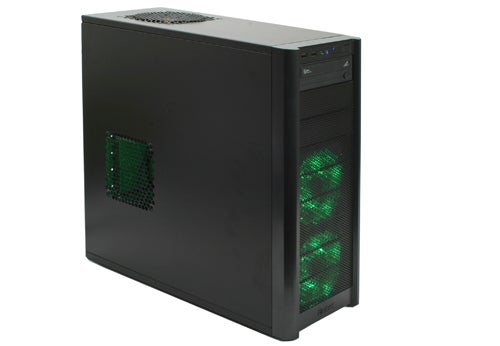 Also, if you can spare another £200, it’s definitely worth considering the Award-winning Cryo Nano, which not only provides a far more powerful setup in a much smaller case, but also gives you full CrossFire expansion capabilities.


Decent but in no way outstanding (unless you really like green lighting), OCUK’s Titan Xenomorph AVP Edition gaming PC fails to generate the enthusiasm its name might inspire when push comes to shove.