Available on PC, Playstation 4 (reviewed)
If you’re going to fault Octodad for anything, it won’t be a lack of charm. From its cartoon visuals to its sixties sitcom styling to its warm and quirky humour, it’s practically bursting with the stuff. Here is a game where the hero is an octopus who has disguised himself as a human, got married, and somehow spawned human kids.

He’s the ultimate fish (well, cephalopod) out of water, desperately trying to fit in while dealing with an anatomy that’s just not fit for purpose. Think your daily life is a struggle? Imagine supermarket shopping when your arms and legs are tentacles and you’re doing your best to make them work like human limbs.

This is both Octodad’s main gag and the mainstay of its gameplay. You move by swinging your lower tentacles one at a time with rapid squeezes of the PS4 DualShock 4’s L2 and R2 triggers. You manipulate objects by manoeuvring your arm tentacles with the analogue sticks and latching on with the R2 or X button.

The controls are intentionally slack and fuzzy, transforming our hapless hero from a weird-looking gent in a nice blue suit into the focus for scenes of utter chaos, as unwanted items get tangled in your tentacles, or you flibber and flubber your way through the scenery, scattering everything in your way.

The point of Octodad isn’t to play well, but to have fun when you play badly. You can and will fail, but only when your exploits get so much attention that your dreadful secret is finally uncovered. 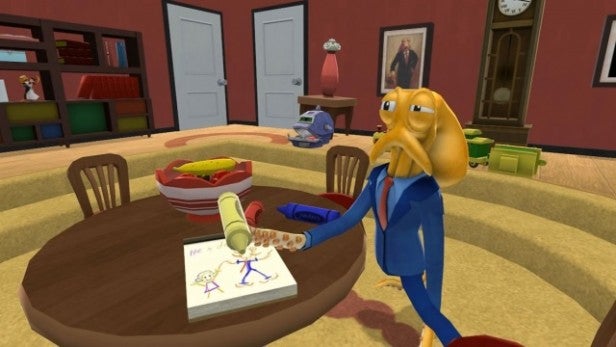 There’s potential here for something great. The development team, Young Horses, has found some sticky situations for Octodad to get through, and it’s the kind of game where you can make your own fun, squirming as you try to fry burgers without singeing your suckers, or rambling your way up and over supermarket shelves.

There are opportunities to be inventive, finding different approaches to grab a bottle of juice from a ceiling display, or ingenious ways to cheat in old-fashioned sideshow games. When everything is a challenge, even the simplest tasks become a source of silly moments. At times, Octodad is almost as much fun to watch as it is to play.

It’s also fantastically endearing. It’s not just the bizarre premise that’s so likeable, but the goofy attitude of your coleoid lead character; a guy who wants to be a good husband and father even if he’s not quite like you and me (though we don’t like to make any assumptions). It’s in the way your family seem wilfully blind, if slightly suspicious, about anything being strange, and in the half spoken, half garbled dialogue between your hero and his spouse and offspring. It’s in the way your fellow citizens seem to ignore the destruction going on around them.

Octodad works as a playful sitcom satire, and packs in plenty of in-jokes on the indie gaming scene as well. 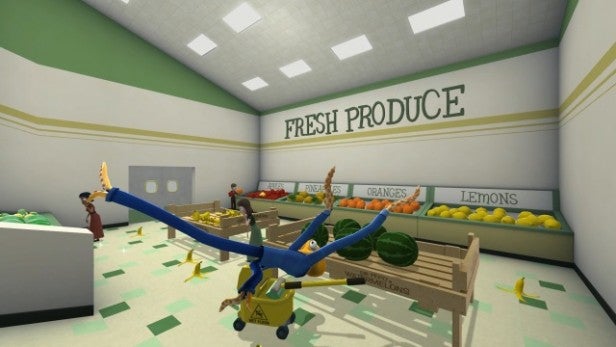 Yet Octodad has two big problems. The first is that it proves you can be funny without always being fun. The deliberately vague controls are what make Octodad so entertaining, but not when you give players tasks that require precision and/or speed, causing them to either fail repeatedly or fall and struggle their way up or along some chunk of scenery all over again for the umpteenth time. It’s not a hugely difficult or challenging game, but there are points where the controls stop being part of the enjoyment, and simply make the game frustrating.

The second is that it’s both short and unevenly paced. We’re not actually too worried about the first bit – this isn’t a game you want to go on and on – but it seems like some of the best and most imaginative sections crop up early on, while the later parts can be a struggle.

For every section that’s an out-and-out hit, there’s another that seems needlessly prolonged, with objectives that don’t really take you anywhere new or interesting. There’s some extra fun to be had in a two-player co-op mode, which has you sharing control for extra carnage, along with an option to replay completed scenes in a freeplay mode. All the same, Octodad has a fairly short lifespan. 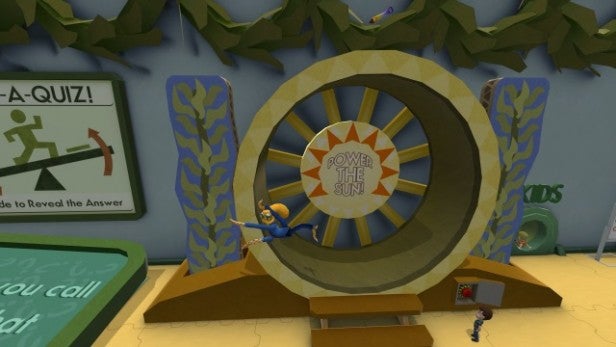 In short, we have a nearly brilliant game – one that could almost fit in the same line as Japanese oddities like Katamari Damacy and Noby Noby Boy – but one that never quite gets its suckers on the prize. Much as we like Octodad and his crazy, messed-up world, the overall experience isn’t quite as good as we’d hoped it would be.

Verdict
Octodad has brilliant ideas, endearing characters and a great sense of humour, but as a game it’s not quite where it should be. The deliberately vague controls cause a little frustration along with the hilarity, and it’s not long enough or rich enough to hold your interest for more than an evening or afternoon. There’s potential here for something great, but Octodad needs to stretch those tentacles further if it wants to reach that point.