What is the Obi Worldphone MV1?

He’s the pioneer of the Obi Worldphone brand, which aims to create attractive but affordable smartphones targeted at younger buyers in developing regions across Asia, Africa and Middle East – as opposed to the US and Europe. Now, that’s quite a feat.

The company’s first phones, the SF1 and SJ1.5, were received well by techies right around the world and seen as viable alternatives to more known handsets like the Moto G and Honor 7. But that wasn’t enough for Obi.

Looking to achieve maximum impact on a global scale and to take advantage of the growing number of people wanting cheap phones, it decided it had to release another handset. Enter the MV1, an unlocked, dual-sim phone capable of running Android Lollipop or Cyanogen OS, and it’s available in the UK for a penny-pinching £119.

Video: Which is the best smartphone at the moment?

At first glance, the MV1 looks just like any other budget Android smartphone, struggling to fight for differentiation. In fact, no thanks to its slightly curved design and straight edges, it could be easily mistaken for an old Lumia or the Moto G. That’s not necessarily a bad thing, but it doesn’t exactly vie to be unique among the crowd.

It’s not an ugly phone by any means, despite not looking overly different from its competitors. You’ll still be more than happy to show it off in public. The white version is particularly pleasing, as you can see the handset’s curves clearly, as well as the metal band at the top. It adds for a classy effect, and you certainly wouldn’t think it were a cheap offering.

What’s also great is that you can actually hold the phone comfortably, unlike some of the phablets out there. Don’t be fooled, at 145.6 x 72.6 x 8.95mm, it’s no baby handset. However, your hands don’t feel like they’re stretching when you use the phone. It’s not too heavy, either, weighing 149g. Just to compare, the 2015 Moto G is 159g, so they’re similar.

Clad in Polycarbonate – just like many of the Lumia models – the MV1 feels expensive. It’s solid and doesn’t creak, and the curved edges mean it sits in your hand well. The only thing to be wary about is the fact that the material easily picks up grease and marks, meaning you may have to wipe it down with a cloth more than once. I noticed that the removable back plate picks up the most, although a case should help. 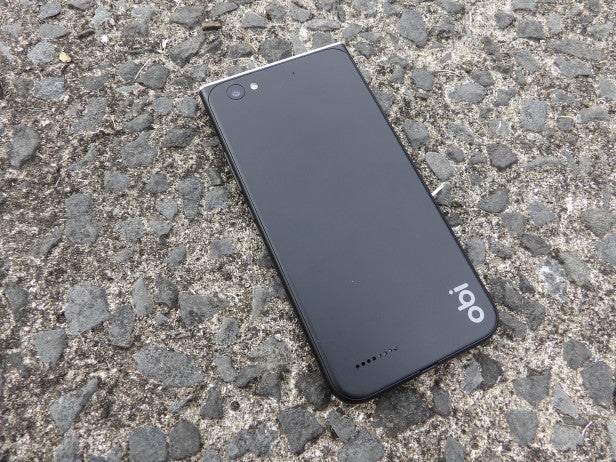 The MV1 sports a reasonably sized 5-inch 1280 x 720 IPS display, which tends to be the norm for budget price point handsets nowadays. While that may be the case, if you look carefully, you can find bargains with even better displays. Budget phones like the OnePlus X and Vodafone Smart Ultra 6 all pack full-HD screens, and for well under £200.

You can get better, but I’m not overly disappointed with the display’s capabilities. With the brightness turned up, on the whole text looks crisp and stands out, and you don’t have to keep blinking in order to focus on detail.

The display has a tendency to make colours appear dull, but this is understandable at a budget price point.

I don’t have any major problems using the phone in the sun, though. I can look at texts, emails, social media feeds and images without having to glare with full force in daylight. This is perhaps thanks to a feature Obi is calling “Sunlight Display”, which does exactly what it says on the tin.

As well as this, you’ll be happy to know that the display features Corning Gorilla Glass 3, which bodes for extra protection against drops. While there is an anti-fingerprint oleophobic coating, the screen still attracts a lot of marks. You can’t really do anything about that, apart from giving it a rub down every so often. 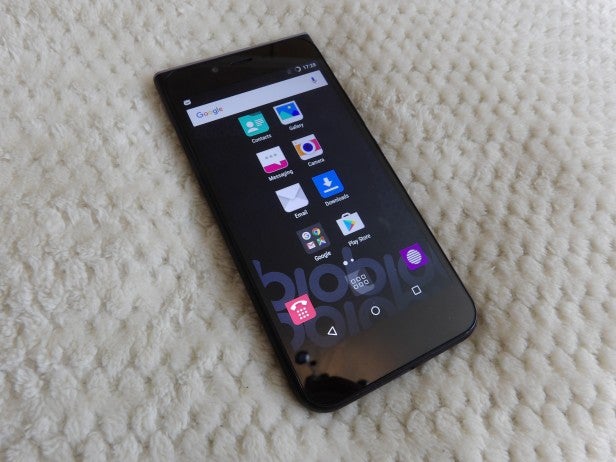 Obi has decided to load the MV1 with Cyanogen OS 12.1.1, which is a strong choice. It’s essentially a heavily modified version of Android 5.1.1. Lollipop, and offers a variety of features that allow you to customise the OS to your taste.

For instance, you’re able to change the phone’s theme. There are over 100 themes to choose from, and they cater for all tastes. Once you pick one you fancy, everything from the handset’s lockscreen to its icons change, which you don’t get with stock Android. In the latter case, the UI is stripped bare, and there’s not a great deal you can do in order to add a touch of your own personality.

It’s a mixed bag, though. While the premise with Cyanogen is that you can customise your handset to your heart’s content, sometimes simple is better. Using the operating system, I think there’s way too much going on. I’m more interested in being able to read my emails and watch funny videos of cats dancing than customisation gimmicks.

There’s still hope here, however. Cyanogen puts security high on the agenda, offering a variety of useful tools for protecting your handset – including Cyanogen’s Privacy Guard, Pin Scramble and Protect Apps. Privacy Guard, which you can access in the phone’s settings, allows you to approve the apps that can use data and those that can’t. Hopefully it’ll help you avoid running up massive phone bills.

Pin Scramble also has its uses. It makes it complicated for people to get into your phone, mixing up the numbers organised on the lock screen whenever someone tries to get on it. Protected Apps, on the other hand, lets you add passwords to folders so that intruding users can’t pillage your precious data. So if you have a relative or friend who is always trying to sneak onto your phone, you have a way to keep them at bay.