Not long ago I looked at Nokia’s E60, a handset unashamedly aimed at the business user. Utilising the Symbian S60 operating system, it offered a full range of smartphone features such as PC synchronisation (including over the air sync for corporate networks), Wi-Fi, 3G, a high resolution screen and decent Web browsing facilities. Its missing camera, an odd choice of memory expansion support and poor battery life went against it.


In many respects the Jet is not a patch on Nokia’s E60. Where built in software is concerned, if the E60 is Fred Astaire, the Jet is more of a penguin in Wellington boots. In fact, there is only one reason you are likely to plump for this handset. Like O2 says, the battery life is indeed incredible.

I was not able to run my standard music rundown test on this phone because there is no music player. Instead I had to rely on the ‘standby’ test. O2 reckons you should get up to 540 hours on standby, 9 hours of talk. After 7 days of sitting on standby (168 hours), I finally saw the battery monitor on the Jet go down to below half way. Maybe O2’s estimate is a bit wide of the mark – 540 hours is 22.5 days – but battery life does seem to be outstanding.


O2’s accessory bundle includes a car charger and desktop cradle with a USB sync and charge cable as well as a mains power adaptor. Between them these should make recharging on the road as easy as possible, and the car charger is a superb idea.


The plastic protective case that is also supplied with the Jet is frankly horrid, but it is not crucial to using the handset so ditching it is not a problem. 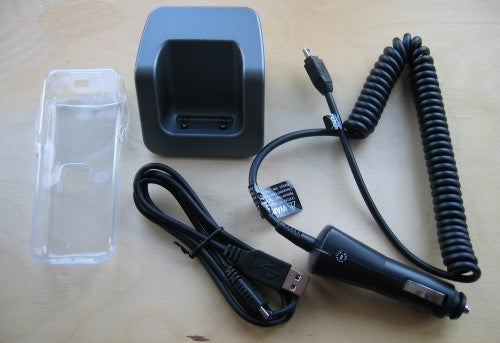 The desktop cradle is supplemented with PC software. This installs drivers which let you use the Jet as a GPRS data modem. Once the install routine has been finished the Jet can be used with a PC in two modes – Mass Storage and Sync mode – you choose which you want to use on the handset when you connect it to your PC.


In Sync mode the phone will synchronise contacts and calendar with Outlook or Outlook Express. In Mass Storage mode you can access folders in the Jet’s internal memory and copy them to and from the phone. There is 55MB of internal memory, and that’s your lot. You can’t expand on it with flash memory cards.


Earlier I alluded to the relatively basic nature of the Jet’s software. What this boils down to, in addition to calendar and contacts software are Web and WAP browsers, email, MMS and SMS software, a clock with alarm, and a set of applications gathered together under the heading of Tools.

Bizarrely enough, the Tools include a Body Mass Index checker. You enter your gender, height and weight and get a BMI report. I can’t fathom why on Earth O2 thinks this is useful for such a basic handset, but there you go ”(for Fat Cats that are worried they’re getting too fat?…ed).”


The other applications in this group seem a tad more useful. There is a voice recorder, converters for currency and units of weight and length, calculator and a manager for Bluetooth. The Tools area is also where you find the Jet’s file manager and memory monitor.


The O2 Jet looks rather dowdy. Its almost entirely black colouring and obviously plastic casing aren’t going to endear it to anyone who wants a bit of bling from their phone.


It is also a bit on the clunky side. It weighs 121g which is not too much for the average pocket, but it is fairly sizeable at 118mm tall, 47.7mm wide and 19.1mm thick. The slightly greater than usual dimensions mean there is room for a large number pad. Above this the softmenu buttons and Call and End keys are also fairly large. Though the navigation button is not particularly oversized it is ridged which makes it easy to use with the thumb.

The screen is a bit of a disappointment. It measures just 2.0 inches corner to corner and offers 65,000 colours. I couldn’t get any detail out of O2 on the screen resolution, but I’d say that the pixel count is low. It is ‘good enough’, but those who like to be at the leading edge will find it a little staid. Then again, anyone wanting to be at the leading edge might have stopped reading this review by now!


Side buttons are minimal. A volume rocker is on the left edge, heavily disguised as a piece of metal trim – it is not marked in any way. The handsfree speaker is on the right edge. On the bottom edge are the mini USB port for mains power and wired PC connectivity and a 2.5mm headset connector.


There is a profile selector key on the top edge. This enables you to switch between your normal profile (either normal or outdoor depending on what you’ve set as the default) to silent or vibrate only. If you choose one of the latter two the front screen shows ‘silent’ or ‘vibrate only’ as a constant reminder.


There is no doubt in my mind that if your primary consideration is battery life then the Jet is worth considering. Ditto, if you aren’t bothered about fancy stuff like multimedia, music and cameras, but do want desktop diary and contact synchronisation. Yes the Jet is clunky, No it doesn’t do a lot of stuff that many modern phones do. But if you want a handset for phone calls and don’t care about the rest, it’s worth a punt.