NZXT is a specialist case manufacturer and has as such gained a following in parts of the gaming and modding community. The company is known for the distinctive look of its cases, starting with the Guardian and this has continued with several different products. The Nemesis Elite is NZXTs first aluminium case and the internal construction is similar to that of the Gigabyte 3D Aurora. 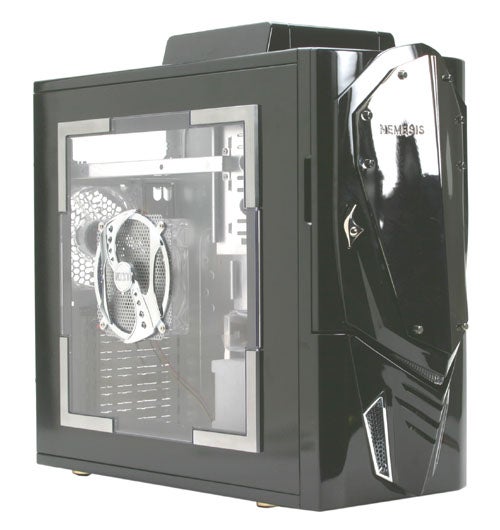 But let’s start with the externals, since this is where the Nemesis Elite distinguishes itself from most other cases. The design is one of the main selling points and it’s undoubtedly a love it or hate it kind of thing. It must be said though that the team here at TrustedReviews isn’t too keen on it.


A plastic door covers two thirds of the front of the case and is the main feature of the fascia. It looks like something like a cross between a suite or armour and some kind of a sci-fi robot, and reminded me of General Greivous from Revenge of the Sith.


There is a metal plate that covers most of the door with a small V-shaped light underneath it. The colour of the light can be changed by pressing a small button on the inside of the door. The door also has button that enables you to press the power button with the door closed. Below the door is the fan intake for the front-mounted 120mm fan with blue LEDs. This means that the lower part of the case is lit up by the light from the fan. 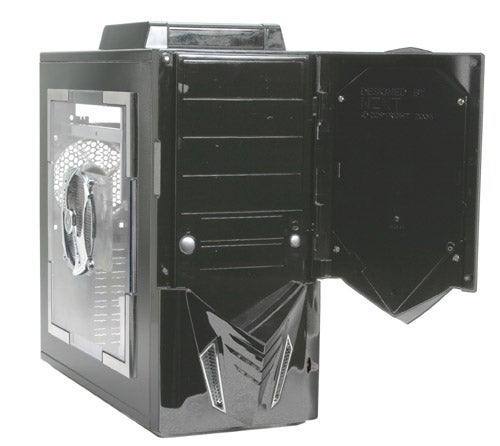 Normally, the top of the case isn’t discussed in a case review, but NZXT has fitted a rather bulky, and frankly, unsightly plastic module here. This is in two parts. The front part contains two USB 2.0 ports, a single six-pin FireWire port and a headphone and microphone socket. This can be rotated to hide the ports.


Behind this is a multifunction LCD display, which can be folded up and down to protect it if you want to take your PC along to a LAN party for example. The display provides the kind of stuff you would expect such as fan speeds and temperature readouts – as long as you’ve wired everything up correctly inside the case. It also has a built in clock with alarm. 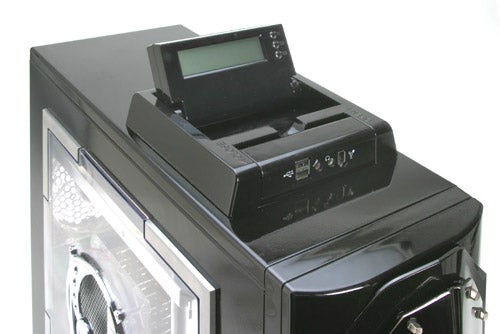 The left side of the case has a pre-fitted window with a 120mm fan mounted in it. This fan has is connected via a standard Molex connector and features blue LED lights. A couple of thumb screws hold the side in place and there are no fancy latches or anything similar.


Internally, the case really reminds me of the Gigabyte 3D Aurora, although it’s more like its little brother than a twin. There is a single rear 120mm fan instead of the two in the 3D Aurora and there are no holes for any water-cooling pipes, but the same card retention mechanism is used. The Nemesis Elite also comes with a plastic box fitted inside the hard drive bays in which all the accessories are kept. 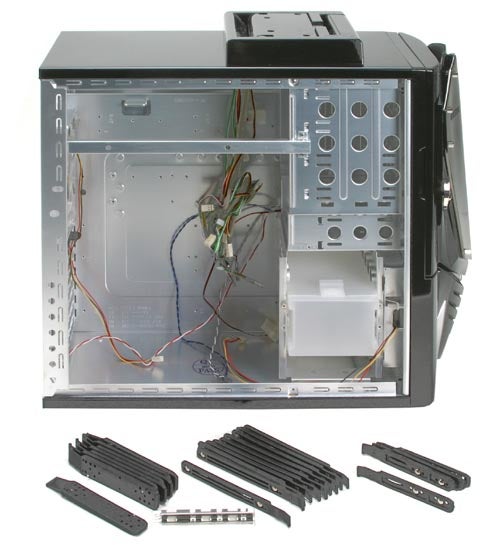 Now to the bad part: wiring. To get the top mounted ports and the display to work there’s what looks like miles of wiring that has to be connected up. The ports are easiest as they use standard connectors, apart from the audio connectors which have to be manually wired up pin by pin. Two Molex connectors are provided, one of which powers the LCD display while the other powers the front lights. There are also three connectors from the unit at the top that you connect to the CPU fan and the two case fans.

All this is done so you can read the fan speeds on the LCD display and in combination with the thermal sensors allow for the built in automatic fan controller to adjust the fan speeds. The CPU connector also plugs in to the motherboard, so that it thinks that fan is actually installed straight to the motherboard to avoid it complaining that no fan is plugged in. 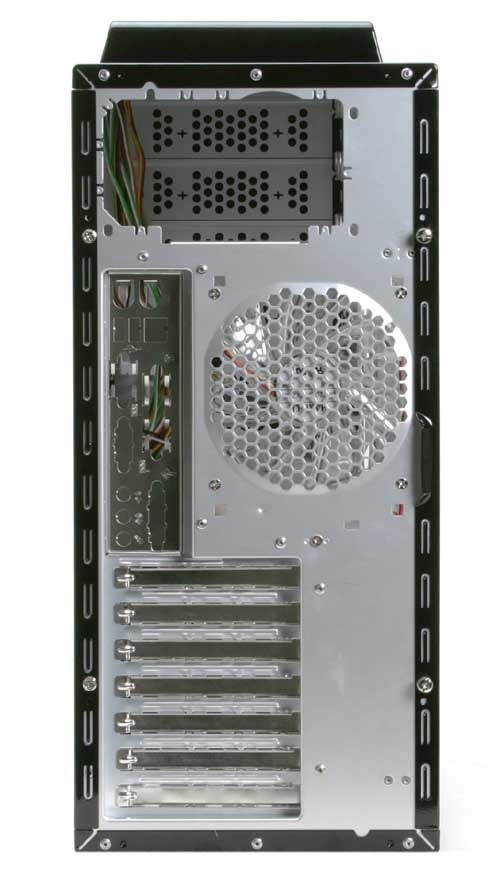 There are three thermal sensors, and if you want to use the built in fan controller that’s part of the LCD display unit, you have to place these in suitable locations inside the case. This is done with small pieces of supplied cellotape. Finally, there’s a wire that plugs into the hard drive light pins on the motherboard and it offers a pass through for the front LED. All this is a lot of work just to make use of what I think is very much a novelty item.


Overall, internal construction is pretty good, although the crossbar at the top of the case could make it hard to fit some larger PSUs. The supplied fans aren’t the quietest around, but as long as they’re not running full speed you wouldn’t take too much notice of them. 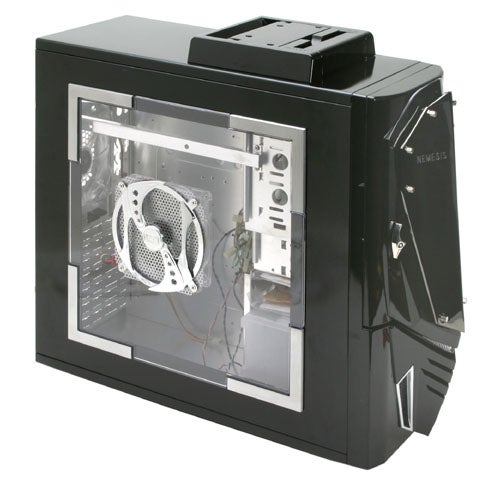 As you can pick up the Nemesis Elite for as little as £51.45 it’s actually quite good value for money, if this is the kind of case you want. It’s not my dream case, but it’s an affordable aluminium case with a distinctive look


The NZXT Nemesis Elite is not a case for everyone, but it’s got a lot of features on offer, as long as you can be bothered to set it all up, and it doesn’t cost a fortune.