The Nvidia Shield Tablet runs the latest Android 4.4 KitKat and Nvidia has been quick to confirm the Shield Tablet will get the Android 5.0 Lollipop update as soon as possible. That’s partly down to the fact the Shield Tablet pretty much runs stock Android, with only a few Nvidia touches on the vanilla Nexus experience.

In fact, most of the additions, apart from the Camera app, are to highlight the gaming capabilities of the Nvidia Shield Tablet. We’ll talk about both these features later in the review.

From a fresh boot up of the Nvidia Shield Tablet, the device is kitted out with a collection of Google apps: Drive, Play Store, Chrome, Google Plus, Hangouts, Play Movies & TV, Play Music, Play Games and Play Newsstand just to name a few.

Nvidia has also preloaded a few apps to highlight its DirectStylus 2, such as Nvidia Dabbler, JusWrite and Evernote.

Right on the homescreen there are two app folders that Nvidia has placed for you. The first is the Google hub, which offers a selection of the aforementioned Google services; the second is a folder full of Nvidia exclusive apps.

It’s commendable that Nvidia has taken the time to highlight the gaming features of the Shield Tablet from the moment you turn on your brand new tablet. It’s just a little thing, but it really stresses the fact that this is a tablet for gamers made by gamers. 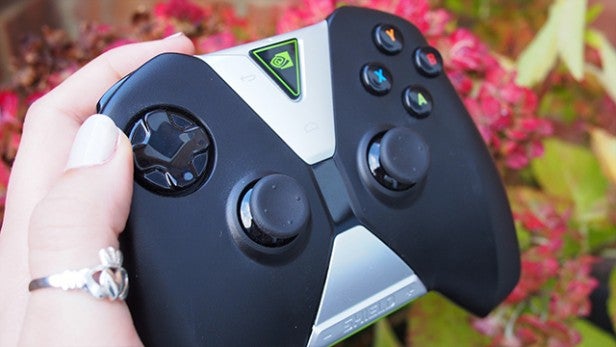 Aside from solid build quality and an impressive screen, underneath the hood is where the Nvidia Shield Tablet really excels. It runs on the custom built Nvidia Tegra K1 processor clocked at 2.2GHz combined with a 192 core Kepler GPU.

There’s also 2GB of RAM. Although this can’t compete with some of the RAM capacities of 3GB touting high-end smartphones like the Samsung Galaxy Note 4, it doesn’t ever struggle with running multiple apps at once, even if there are high-end Android games running away in the background.

Because of the processor, we never experienced lag or framerate drop when using the Nvidia Shield Tablet. It’s slick and smooth whatever you’re up to.

The benchmarks provide further support for our user experiences too. In GeekBench 3, the Shield Tablet scored a rather impressive 3,209 in the multi-core tests, putting it well ahead of alternative tablets like the iPad mini  2  at 2,418 (and therefore the iPad mini 3 as well) or Samsung Galaxy Tab S 8.4 at 2,669.

In 3D Mark, the Shield Tablet achieved an impressive 29,206. That means it is right up there at the top of the tablet pack, beating out the likes of the Sony Xperia Z2 Tablet, but not quite on par with the Microsoft Surface Pro 3. 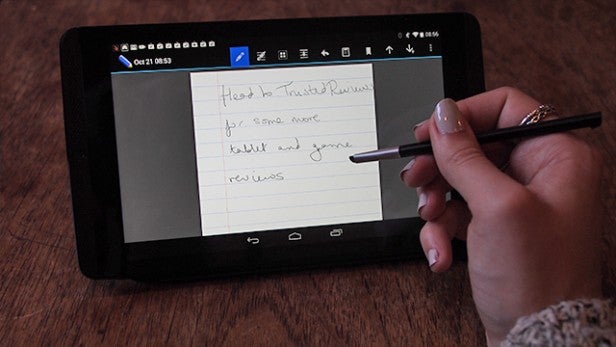 Just like other devices with a built-in stylus, like the Samsung Galaxy Note 4, the Shield Tablet kicks into what we’re calling “stylus mode” as soon as you whip the DirectStylus 2 out of its dock. And that happens whether you’re grabbing the pseudo-pen straight from the lock screen or in the middle of running another program.

Undocking the stylus causes a special pop-up menu to appear, known as the Nvidia DirectStylus launcher. Even if you’ve not set this up yourself, you’re immediately presented with a selection of stylus compatible apps – Nvidia Dabbler, Evernote, Write and JusWrite. In this launcher, you can also add additional apps or head to the DirectStylus settings menu.

What’s great about the Shield Tablet is that the stylus can be used with any app. Hold down the space bar and just pick the handwriting recognition option to use the stylus with other apps including Gmail. It’s not the easiest way to input text, though. You only get a small space to write in and the software can take a little time to catch up with your scrawl and turn it into printed text. We used it far more with apps like Evernote or Write where you can make hand-written notes directly. 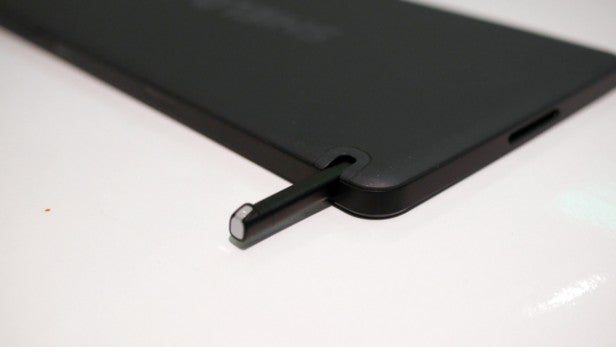 Of course, for the budding or more accomplished artists there’s also Nvidia Dabbler — a specialist sketching app that offers an array of artistic materials, textiles and other features to create your masterpiece. I’m in no way qualified to say whether it offers enough freedom for the accomplished artists, but there are definite pro skills. Paint reacts just as is would in real life, with paper blotting with watercolours, layering up with oil paints and you can even scrape away the layers to reveal your base colours.

The Stylus itself is pressure sensitive and we had some real fun playing around with Dabbler, even if our results weren’t anything close to masterpieces.