We’ve already established that the Nvidia Shield Tablet is a more than adequate Android tablet, but it’s the gaming content that makes the Shield Tablet really shine.

To begin with, let’s look at the internal hardware that makes gaming on the Shield Tablet pretty special. The Kepler GPU is based on the same architecture Nvidia uses for its PC graphics cards. It therefore supports all the same APIs and systems used to create PC games, meaning games run a lot smoother on the Shield and developers can more easily port games to tablets running the Tegra K1 SoC — also now found in the Nexus 9.

Because of that, if you want to make the most of your new Nvidia Shield, be prepared to spend a little money getting some premium, Tegra-optimised games. Nvidia gives you the full Trine 2 story for free, which works brilliantly with the Shield Controller, though there on-screen controls if you’d rather play like that.

The special Tegra-optimised games lie within the Shield Hub and range in price. Some are free, but if you want a AAA title to play, you could be looking at a £5.99 investment to get the likes of Half Life 2 or Portal on your Shield Tablet. It’s definitely worth it, though, especially if you’ve made the additional £49.99 investment for the Shield Controller, more on which in a minute. 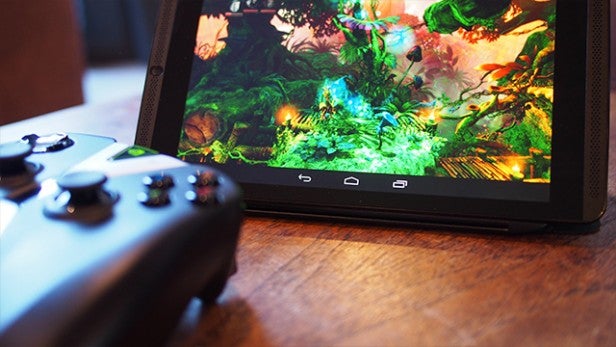 Although you can play games on the Shield Tablet from multiple sources, whether that’s Google Play or the Amazon Store or the Shield Hub, it’s worth focusing on the Tegra-optimised titles because they’ve been designed especially to really put the Shield Tablet through its paces and they take Android gaming to a whole other level.

Of course, the Shield Tablet’s gaming capabilities go a lot further than being able to play console worth games on a portable device. Nvidia has kitted it out with a batch of other unique features that makes this more of a niche gaming device.

For starters there’s the special console mode: accessible through the Nvidia folder on the home screen. You’re immediately presented with two options — Mirror Mode or the headline Console Mode. Mirror Mode is exactly what it sounds like — once you’ve connected your Shield Tablet to your HDTV by HDMI to mini HDMI cable, you can mirror all the gaming action on both screens.

Console Mode is best if you have the Shield Controller. It turns off the Nvidia Shield Tablet’s display, leaving all the content solely on your TV screen in full 1080p HD. Then, you can kick back on the sofa and experience Android and Tegra-optimised gaming on the big screen without the hassle of touch screen controls. And because the Shield Controller connects via Wi-Fi Direct rather than Bluetooth, it cuts down lag to around 10ms rather than Bluetooth’s 20ms — useful for FPS titles.

What is slightly annoying is that Nvidia doesn’t provide the HDMI to mini HDMI cable as standard with the Shield Tablet or Shield Controller, meaning unless you’ve got one lying around, you won’t be able to use the Console Mode feature straight out of the box. 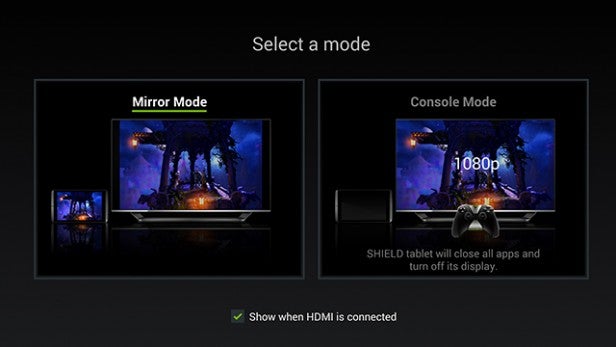 Another Shield Tablet unique feature is its built-in Twitch streaming. The Twitch app comes pre-installed, and unlike other tablets you can stream any gameplay content from your Nvidia Shield straight to the broadcasting service. You can even add in-game commentary using the front-facing camera and in-built microphone.

To access the broadcast feature you can select it from the Android Quick Menu, or just hold the back button on the Shield Controller to bring up the menu.

You can capture your whole screen and stream directly to Twitch for the first time with a tablet and the menu offers you a variety of choices to make the experience a little more unique. You can make broadcasting automatic or manual, add voice commentary, turn on chat or add your own face into the via a little window-in-window action if you want.

However, it’s not without its issues. When streaming direct to Twitch, performance can take a nosedive. You might not keep that 60fps framerate when streaming your Portal session for the entirety of your streaming session, but Nvidia makes no claims that the functionality is perfect.

The fact that this is the first tablet to have fully integrated Twitch is a huge step for mobile gaming and is worth exploring if you’re an avid Twitcher. 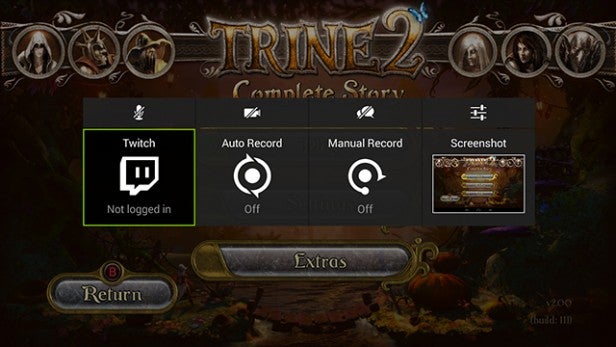 Finally, there’s Gamestream. This really is the most niche of the Nvidia Shield Tablet’s features and one only the most hardcore PC gamers are likely to take advantage of.

Gamestream is the rather unique PC streaming service that lets you play selected PC games on the Nvidia Shield Tablet. It sounds like PS4 Remote Play, but it’s a little more complicated than that.

In order to utilise the service, you’ll need a gaming PC equipped with a Nvidia graphics card that’s a GeForce 650 GTX/GTX 800M or higher. Plus, you’ll need a compatible Wi-Fi 802.11 a/g router at a minimum, but Nvidia recommends you’ve got a dual-band 802.11n router.

Not many people will have both of these things and if they do, they’ll most likely be wanting to play games on their dedicated gaming PC rather than streaming them to the tablet. There are just over 100 games compatible with the Gamestream service, including Titanfall, Borderlands 2 and Assassin’s Creed: Black Flag, but there’s no guarantee that the game you want to play will work.

Clearly it’s not a feature for everyone, but provided you have the right hardware it works very well. We had no problems with lag when streaming games over a local wireless network. 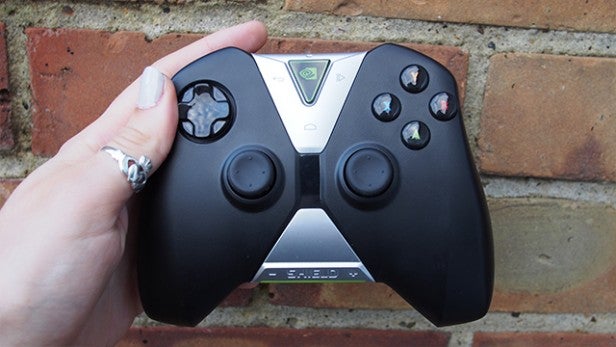 If you’re serious about getting the most out of the Shield Tablet,  the Shield Controller is work every penny of its sizeable £49.99 asking price.

On the surface, the Shield Controller looks remarkably like an Xbox One controller, albeit with the left analogue stick and D-Pad switched around. The build quality is reassuringly solid, but possibly a little on the heavy side for longer gaming sessions.

Sadly, you can’t wake the Nvidia Shield Tablet from sleep using the controller as you would with an Xbox One or PS4, which we forgot numerous times.

The triggers and buttons are made out of glossy plastic, which makes them feel a little cheaper. But during gameplay the controller is very responsive and you soon forget about this.

Between the face buttons and the D-Pad, you’ll find the Shield logo, which wakes the controller and connects it to the Shield tablet, and a range of soft-touch buttons — Home, Back and Start. The fact they’re not physical buttons does take a little getting used to, but again they work well for navigation. 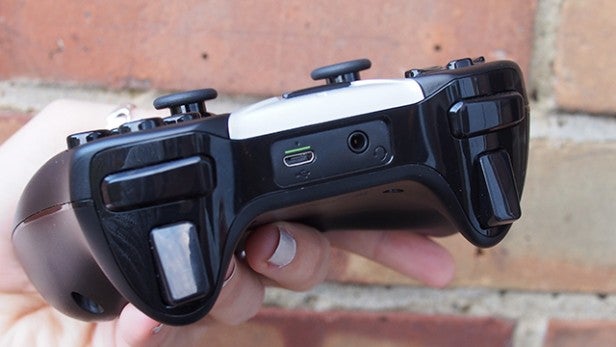 We’ve been using the Nvidia Shield Tablet and the Controller for several weeks and have only had to charge the controller once. It’s hard to judge how long it will last continuously on a single charge, but it definitely outlasts the Tablet itself.

Along the top of the Shield Controller you’ll find a 3.5mm headphone jack too, which you can plug a stereo headset into and take your gaming to a more private experience. There’s also volume controls at the bottom of the controller, conveniently placed between the analogue sticks for easy access.

Although the Shield Controller isn’t small, it’s the best choice for comfort during long play sessions. However, that might come at the expense of portability. While I was quite happy to chuck into into a larger handbag or laptop bag, I had to leave it behind for lighter load days, limiting the full gaming potential of the Shield Tablet itself.

It’s also worth considering that the Shield Controller doesn’t work with any other devices, so you’re not actually investing in an all round Android gamepad.