TrustedReviews has tested all of 2016’s graphics cards, including the Nvidia GTX 1060, on the same system, which represents a fairly typical gaming rig in 2016. It consists of the following components:

The Nvidia GTX 1060 is an extremely capable card at Full HD resolutions and delivered well above 60fps in all the gaming benchmarks. In this section, I’m going to focus on 1440p performance, since this is an area where the GTX 1060 and the AMD Radeon RX 480 will go toe-to-toe.

Where relevant, I’ll mention any surprises in the other benchmarks. TrustedReviews tests all games at Full HD and 4K for completeness.

Dirt Rally is our easiest benchmark and represents newer games that don’t have the graphics and physics challenges of triple-A titles. 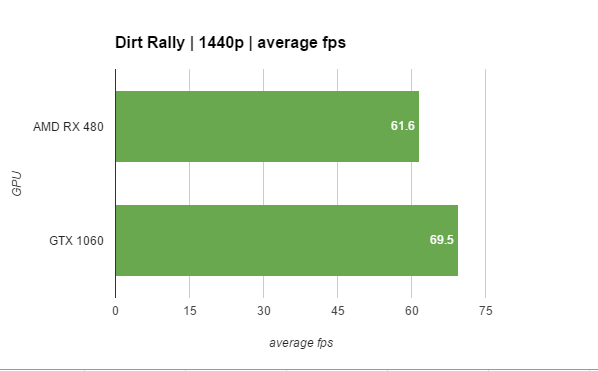 At 1440p, the Nvidia GTX 1060 was a full 12% faster than the RX 480, which is a big news for those looking for a speed bump in slightly less-challenging games. This result was also reflected in the Full HD benchmark, while the RX 480 closed the gap at 4K but remained 8% slower.

Rise of the Tomb Raider is a relatively challenging benchmark with plenty of lighting and particle effects, as well as a few physics challenges thrown in. 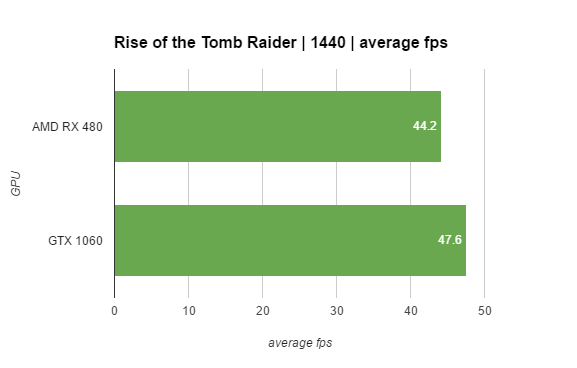 Shadow of Mordor is one of the more difficult benchmark games we use, and we play it at its highest preset. The benchmark is short but packed with challenging lighting and particle effects, so provides a decent challenge for our benchmark GPUs. 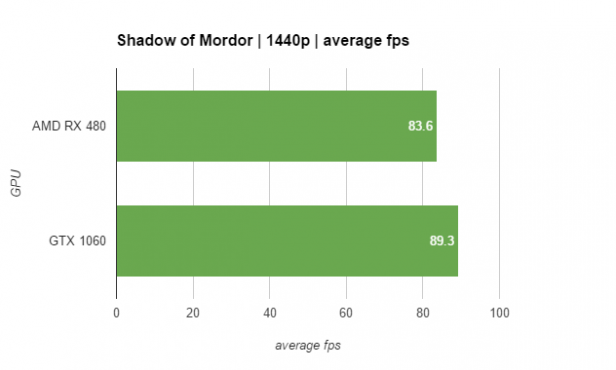 The latest instalment of the assassination franchise is a tough ask for GPUs, with lots of NPCs milling around and challenging lighting effects, too. It’s geared towards PCs with AMD GPUs, but it was quite surprising to see the RX 480 pull ahead by a full 9% in the 1440p benchmark; clearly AMD’s optimisation is paying off here. Still, Hitman is an outlier in the general scheme of things. 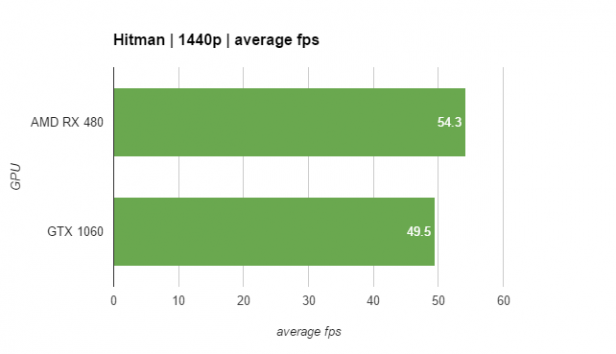 GTA V is probably our most challenging benchmark, with numerous textures, objects and NPCs to render alongside plenty of explosions, lighting and weather effects. For the GTX 1060 and RX 480, I ran the game at a combination of High and Very High settings with 4x MSAA. 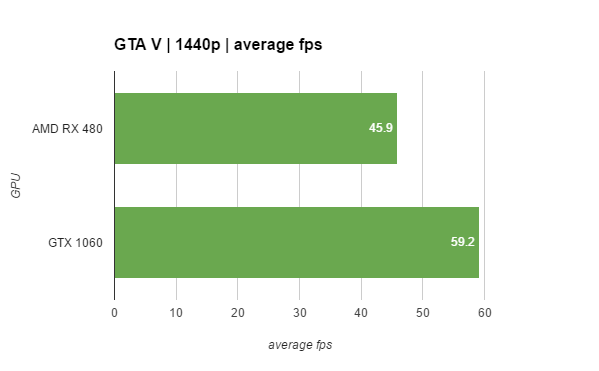 If Hitman was an outlier in AMD’s favour then GTA V is quite the opposite. It achieved an excellent average 1440p frame rate of 59.2fps – a significant 29% faster than the RX 480’s 45.9fps. Both results are more than playable, but the GTX 1060 is definitely the best bet if your main game is GTA V.

Fire Strike Ultra is far too difficult a benchmark to be considered representative of any particular game, but its ability to completely overwhelm a GPU means that the scores it spits out are generally representative of overall grunt. 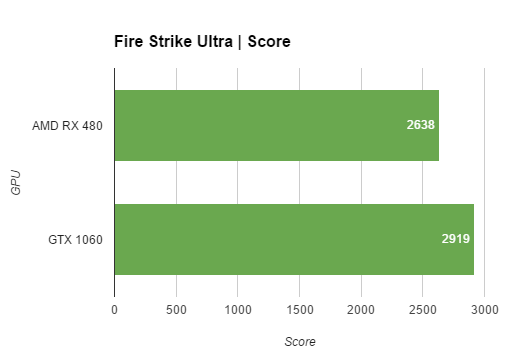 While Nvidia claims that the GTX 1060 would near-enough match the previous-generation GTX 980, this doesn’t appear to be the case in all but one of our benchmarked games.

Also, a note on power consumpion. Peak power draw from our entire test system during the Hitman benchmark was just 207W, which is a truly awe-inspiringly low power draw. This compares to 249W for the RX 480;  Nvidia has absolutely nailed the efficiency of the 1060. It’s also quiet: only under extreme overclocking did it kick up a fuss, but inside a case it definitely won’t be the noisiest thing in there.

There’s plenty of headroom for overclocking the GTX 1060 Founders Edition. The cooler may be fairly basic from the outside, but the fan is able to draw in more than enough cool air to allow for a very stable 220MHz overclock, providing a performance boost of around 7% in most games.

Although it’s unlikely that the majority of people will be buying the Founders Edition card, its ability to overclock is important for third-party manufacturers that will be using their own cooler designs and higher-base clock speeds. My testing reveals that third-party cards have the opportunity to be even faster, although how much you’ll have to spend on a pre-overclocked card remains to be seen.

The GTX 1060 is a capable VR card, scoring 8.8 in Valve’s rather opaque SteamVR benchmark. In my own testing with Project CARS, which is one of the tougher VR games around, I was able to set the graphics to High and achieve a smooth frame rate with a full grid of cars at a rainy Donington Park. Of course, unlike the GTX 1080, it isn’t able to handle the highest possible settings, but for the money it’s capable enough.

Still, if you’re seriously considering buying a VR headset in the next couple of years, it would be prudent to opt for a higher-end graphics card such as the GTX 1070, just to secure decent performance for future VR titles that might be more graphically challenging.

The GTX 1060 is undeniably a great graphics card, offering plenty of potential for overclocking while also being a capable performer in VR. If you’re looking to spend over £220 on a graphics card then it’s a good choice – but it isn’t a complete no-brainer. The AMD Radeon RX 480 has 2GB more memory than the GTX 1060 for a little less cash, although its overall performance is slightly slower.

For raw power, the GTX 1060 is unmatched at this price. However, it’s actually the 4GB AMD Radeon RX 480 that poses a problem here. Benchmarks point towards the £180 4GB model of the card performing just a couple of percentage points slower than the 8GB model, while also costing £50 less than the GTX 1060.

If you’re happy to spend upwards of £240 on a graphics card, the GTX 1060 is a great choice, but with uncertainty over how much pre-overclocked graphics card from third parties will actually cost, it’s hard to make a definitive recommendation.

The addition of a 3GB model has muddied the water somewhat, giving excellent performance for a significantly lower price. When I get one in for review, I’ll update this conclusion.

A great graphics card for 1440p and VR, but it isn’t the ultimate in value-for-money.