What is the NutriBullet Rx?

Not content with making it easier to get your five-a-day through smoothies, NutriBullet is now championing healthy soups with its Rx model. While it isn’t the first blender to ramp up the power in order to cook the contents, the Rx is more compact than equivalent professional-style machines.

A larger version of its smoothie-blitzing predecessor, it comes with similarly super-sized kit. This includes two cups for making cold drinks and nut butters, and a jug for whizzing together steaming soups at up to 70oC.

The Rx is a grown-up version of the familiar NutriBullet design. A power button resides on the side of the unit to switch the Rx on and off, and another button at the front switches it from a minute-long smoothie programme to a seven-minute soup-heating one.

However, its mode of operation has changed, with blending activated by dropping the jug or cup with blades onto the base. To stop, you can either remove or turn off the power. 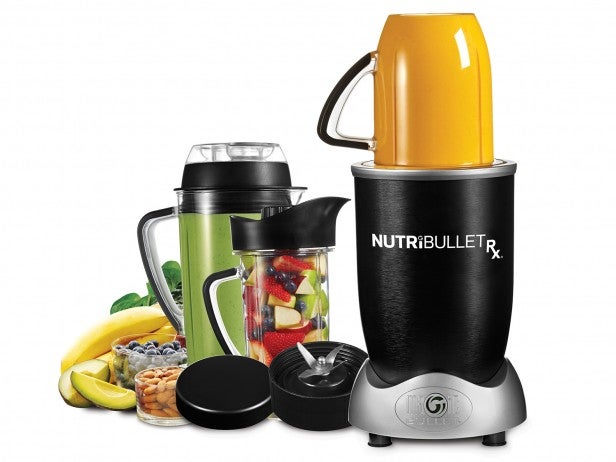 The extractor blade also receives a makeover. Rather than the four, fairly innocuous-looking flat blades of previous models, two of the four in the Rx are angled upwards, tapering to a sharp point.

Of the cups, the short and oversized one are for blitzing smoothies, while the pitcher – known as a SouperBlast – handles soup. As is the case with the smoothie cups, the blades screw onto the pitcher and it’s topped with a two-part lid that’s vented to let out steam.

Also in the box is a pouring lid, a lid and rim, plus a cleaning brush that’s great for getting under the blades. There’s also a spanner-like tool that helps you twist off the hot extractor blade.

There’s no lack of information when it comes to using the NutriBullet Rx. As well as the user guide, there’s a quick-start guide just for making SouperBlasts and 165-page recipe and nutrition book. Unfortunately, some of the ingredients are measured in cups, with recipes appearing to have been devised for the US market.

We started by attempting a straightforward smoothie, the Slimming Vitamin Citrus, using spinach, broccoli, chia seeds and fruit with water. Adding the ingredients to the short cup and attaching the extractor blade, we placed it on the base. It worked through the fruit to the greens at the bottom in around 20 seconds.

The programme ran continuously, with a slowdown three-quarters of the way through; this is designed to help unblended ingredients drop towards the blades. Once the programme  was complete, we removed the blades to find a silky-smooth, bubbly smoothie. The texture was consistent, with a few seeds remaining, but the drink itself wasn’t sweet enough to disguise the taste of the vegetables.

Next, we tried a smoothie with hard ingredients – almonds, combined with black treacle, chia seeds, fruit, spinach and water: a Calci-Yum. While progress was slower, with some nuts rattling around the cup, by the time it had finished, all the almonds had disappeared to leave a smooth drink.

Swapping the cup for the pitcher, we added cauliflower, pear, nut butter, oil, mustard, stock and almond milk. We attached the base and selected the soup programme. It slowed down twice to allow ingredients to settle, and a small amount of steam could be seen in the vented lid.

Once finished, we removed the lid to reveal hot soup with no lumps. Its consistency was thin, and the overpowering flavour was mustard – but the process of making the soup was fuss-free.

The NutriBullet Rx has been designed to cook only once, so if it doesn’t get the soup hot enough the first time, it recommends using a microwave or hob cooking. It also can’t brown ingredients, so this needs to be done before you add the contents to the cup.

We finished by making nut butter from almonds and oil, adding them to the short cup and blitzing in 30-second intervals. After six cycles, the butter was gooey and creamy, with only a few shards of almond remaining.

All the parts, except the extractor blade, are dishwasher safe, making clean-up simple. The brush was particularly useful for shifting any remnants of butter.

Should I buy the NutriBullet Rx?

As a soup maker the Rx is limited, lacking the ability to sauté or reheat. However, the convenience of being able to make fresh hot soup in seven minutes gives it huge appeal. It’s also perfect for family-sized batches of smoothies or making items ahead of time.

Where it could do better is with regards to its design. There’s a lot of kit to store when it isn’t in use, and no obvious way to stack it. We also found the lip of the cups too bulky to drink from comfortably, and would have loved the option of on-the-go flip-top lids.

A few tweaks would make this the perfect appliance. Nevertheless, it’s still fantastic for kick-starting a healthy-eating habit.