What is the Nutri Ninja BL682UK Complete Kitchen System

A full-sized version of the brand’s Compact Kitchen System, the Complete Kitchen System strives to be the only food-processing machine you’ll ever need.

Combining a 1.8-litre processor bowl, 2-litre pitcher and the staple smoothie cups, the list of what it can tackle is endless. Soups, frozen cocktails, dough, batters, pastry, minced meat and ground spices – you name it. For processing newbies, there’s a choice of five Auto-iQ automatic programmes, while pros will appreciate the variable manual speeds.

You get the impression that the person who designed the base unit of the Nutri Ninja has a thing for buttons. There are nine crammed onto the fascia, some with lengthy descriptions, such as Auto-iQ Nutri Ninja Ultra Blend. This feels overwhelming but only the ones you can use with each container will light up, which helps to eliminate some of the confusion.

The base unit itself is weighty, with handles at either side that release the suckers below when it needs to be moved. There’s an LED display that counts down during a programme, or up during manual settings (Low/Dough, Med, High). An On/Off power button starts each setting. Pressing this same button pauses a programme. 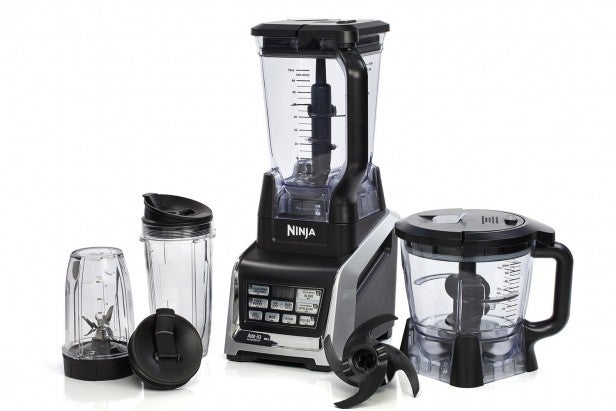 Each of the containers attach to the base unit with a quick twist. There’s a Pro Extractor blade for each of the cups, a stainless steel four-bladed chopping tool, a similar plastic dough blade for the processing bowl, and a daunting six-bladed tool for the blender pitcher. The latter two have lids that push and lock on with a release button for removal, and a small, hinged flap that lets you add liquids while blending – great for making sauces such as mayonnaise.

Considering this appliance is trying to be three machines in one, you’d hope for more than 25 recipes included, a good proportion of which are drinks.

We started by making a fruit and vegetable smoothie with almond milk and ice in the 650ml cup. As well as the lit buttons, there’s also a table in the recipe book that’s a more useful guide to what foods work best on which programme.

We selected Ultra Blend, as we were using ice and some hard ingredients such as pineapple. The blades quickly worked through the ingredients with a series of pulses and pauses at first, followed by constant blending to give the mixture a thorough blitz. Once the programme had elapsed (around 45 seconds), the resulting smoothie had a creamy consistency with no traces of vegetables or lumps. 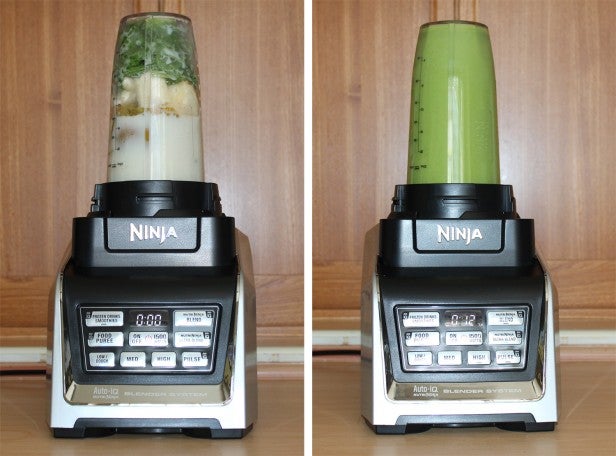 Next, we tried using the 500ml cup to grate Parmesan cheese. Filling it with small chunks, we chose the Pulse setting to have greater control over the result; we could also have used the Food Puree setting, but we didn’t want the cheese to become sticky.

After around 10 pulses, the cheese had started to clump a little. The grating wasn’t as fine as we’d hoped for and one or two larger pieces remained, but this method was quicker and safer than by hand. 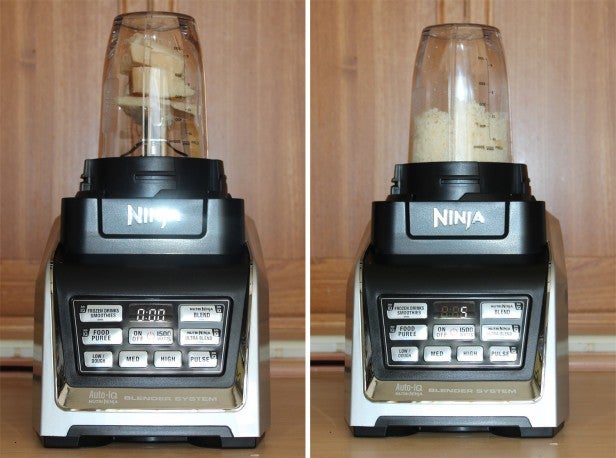 Moving onto the processor bowl and dough blade, we added the ingredients for honey cake batter: flour, eggs and a melted butter, sugar and honey mixture. Then we used the Low/Dough manual setting to combine the ingredients for around 30 seconds. There were a few traces of flour, so we scraped the bowl down and mixed for another 10 seconds. The result was an airy, smooth batter, which when baked was light and fluffy.

Next, we used the pitcher to crush ice. Adding cubes and the stacked blade, we used the Frozen Drinks/Smoothies programme, which rapidly turned the ice into snow some time before the programme ended. There were no chunks of ice remaining, and the snow was evenly crushed – an ideal consistency for cocktails. 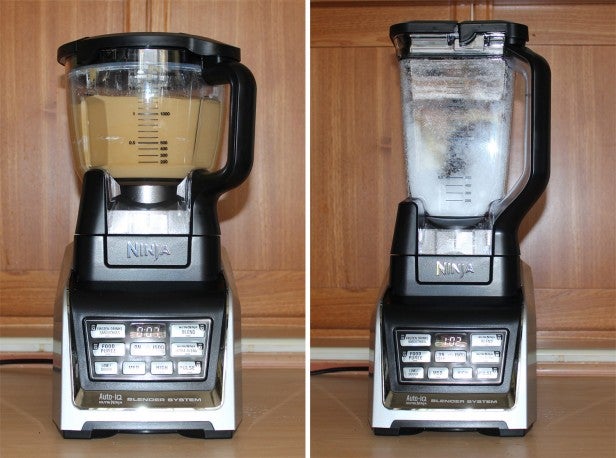 We finished by using the chopping blade with the processor bowl to make sauce from cooled, stewed apple pieces. The Food Puree programme ran for just over a minute, steadily processing the pieces until only a thick sauce remained. Small pieces of apple were left, but otherwise it was even.

All the parts of the processor are dishwasher-safe, meaning cleaning up was effortless. However, the chopping blade and stacked blade were tricky to wash by hand – a brush for getting into the space between the blades would be practical. 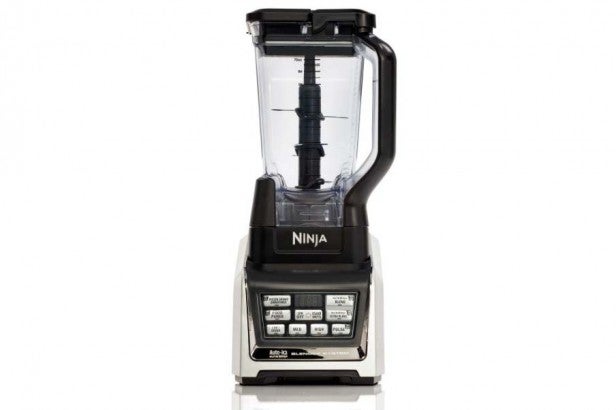 Should I buy the Nutri Ninja BL682UK Complete Kitchen System?

While it’s an evolution from a personal blender, this feels more like a food processor with a smoothie capability rather than the other way around. It’s pretty bulky, with plenty of kit to store, and it’s unlikely to suit those who only use a food processor occasionally.

Where it comes into its own is power and capacity – it’s fast and efficient, making it a good buy for keen entertainers or families who make smoothies and milkshakes regularly.

If your cupboards are as big as your need for blending, this multi-function processor is the one for you.