The Nuraphone are wireless headphones quite unlike anything you’ve seen before: they’re both headphones and earphones. And they analyse your hearing to tailor the sound to your ears.

They might appear to be the sort of throwaway gadget you’d see advertised in the back of a magazine, but they’re actually some of the best-sounding headphones you’ll find for their £350 price. 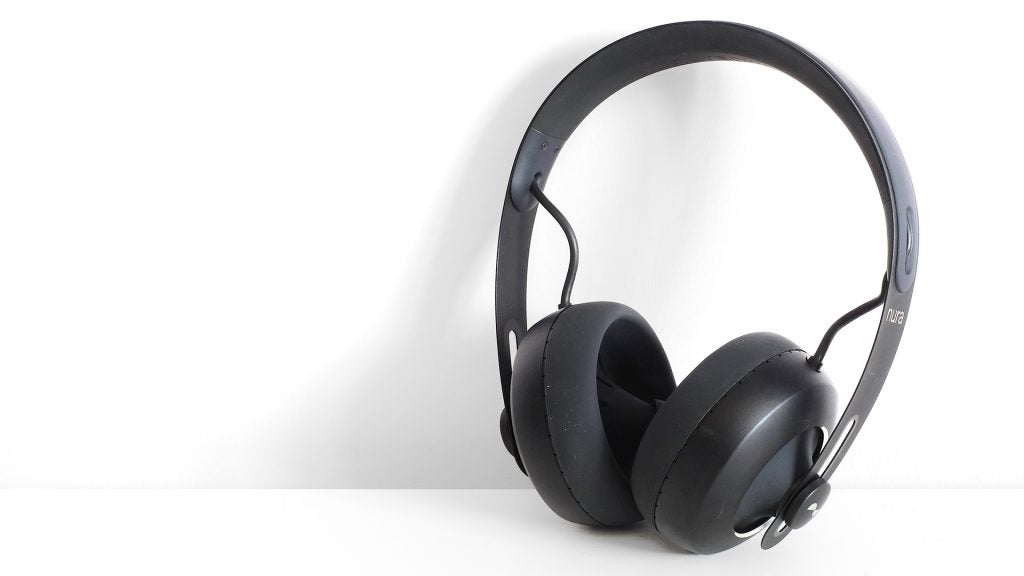 At first glance, the Nuraphone look like any other headphones. Metal over-ear cups and a black finish aren’t made to stand out.

Turn them around though, and you’ll see earpieces that poke out of each cup. The units are lightly spring-loaded too, in order to fit different ear and head shapes. This is apt for a set of headphones whose philosophy is based on customising the experience for you.

The fit and feel is unusual, not least because the earpieces don’t actually feel quite like earphones. I wear IEMs most of the time, as invasive as they come, and find the sensation fades after a while because it doesn’t change. The tips are cemented in your ears. 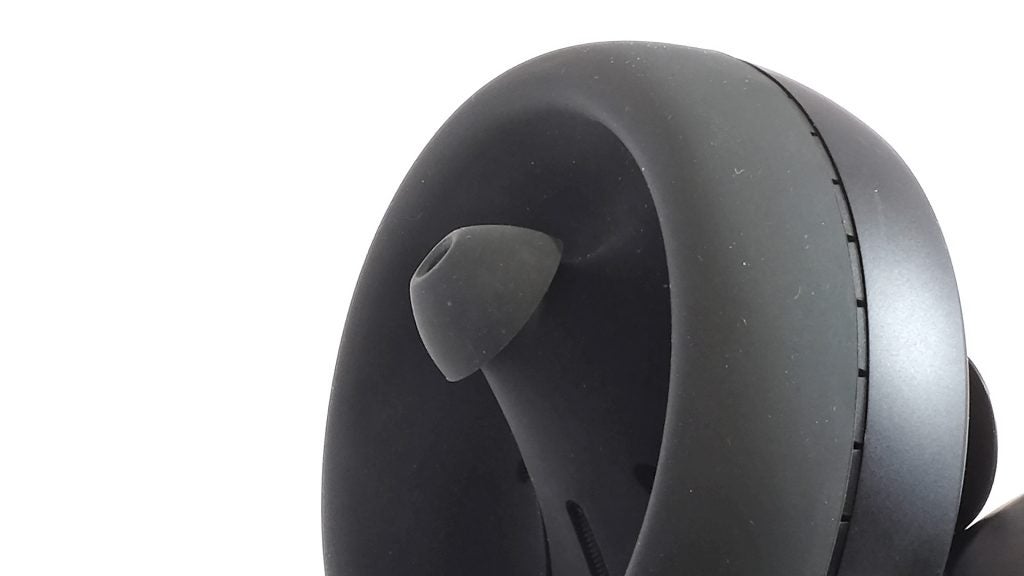 Here, things are different. The Nuraphone’s tips are pushed lightly into your ears, similar to the way a set of headphones’ ear cups are pushed into your head by the headband. They’re rooted to the cups, not your ears. The result is that the feel is harder to ignore, perhaps because as you walk around, the earpieces are actually moving ever so slightly.

They’re not uncomfortable, but I’m certain that it’s a sensation some of you won’t like. It’s a shame then that there’s no way to test drive them, given you have to buy them directly from Nura.

Elsewhere, the Nuraphone’s design is much less contentious. They have silicone outer pads – another bizarre choice, but one that works. The silicone is soft and doesn’t cause any excess sweating because only a thin band of it actually touches your skin. In addition, the cups use a clever venting system to keep air flowing. 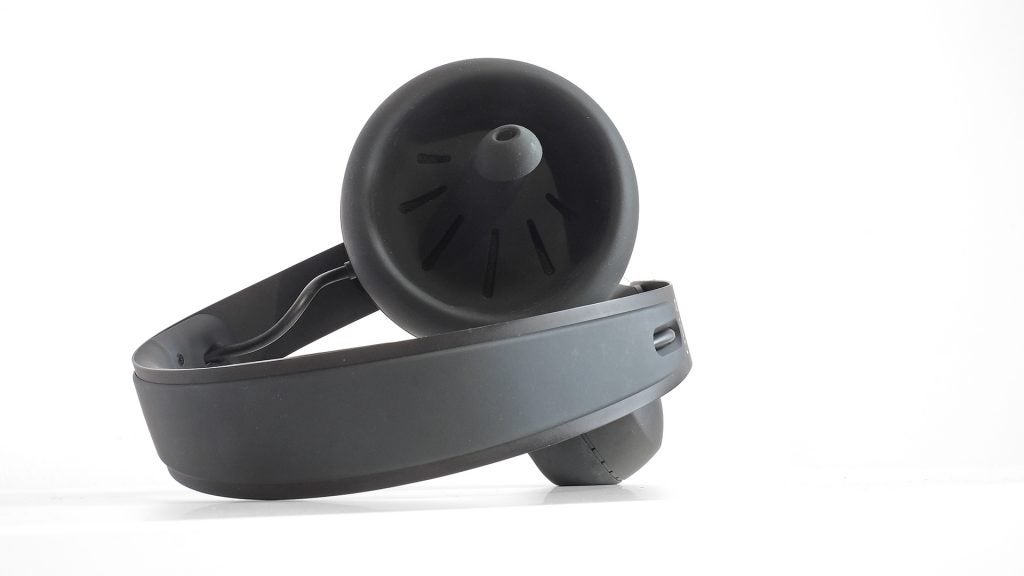 Don’t mistake these for open-back headphones though. The Nuraphone have some of the best sound isolation I’ve heard from a full-size pair of headphones without active noise cancellation.

Great ANC headphones, such as the Bose QuietComfort 35, are better at eliminating low-frequency sound, but the Nuraphone perform well across the whole frequency spectrum. It isn’t magic: there are two separate silicone barriers between your ear canals and the outside. 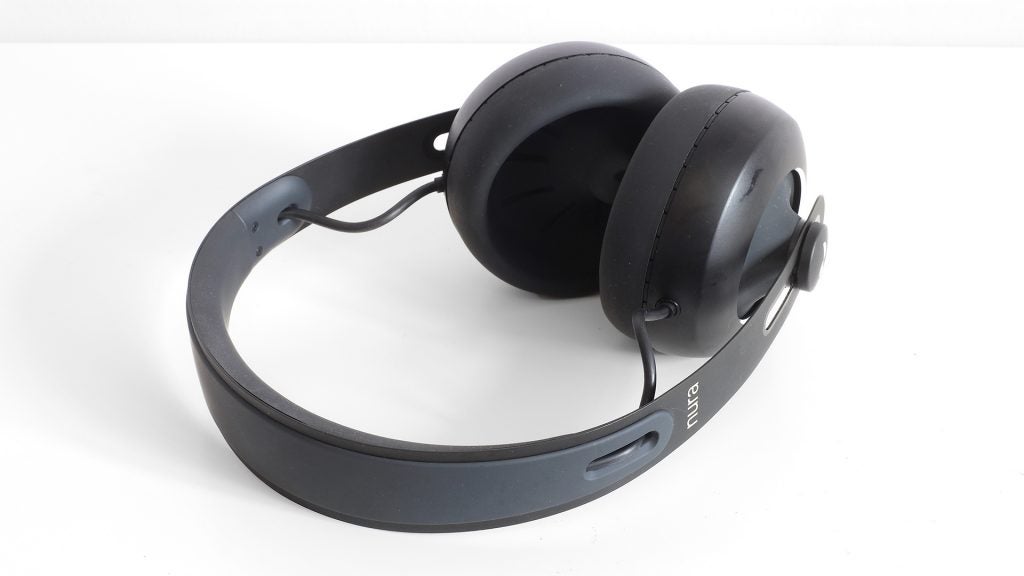 Build quality seems very good too. The headband is steel and the cups are anodised aluminium. Compared to the Beats Studio 3 Wireless, the Nuraphone appear to be the higher-end of the two. The bevelling of the cups’ inner ring is a particularly nice touch, revealing the silvery aluminium beneath.

The Nuraphone are Bluetooth headphones, but it is possible to attach a wire. Since the one socket on the headphones is used for both audio and power, Nura has used a proprietary plug.

In the custom-designed box, you’ll discover plugs for all occasions: Lightning, USB-C, micro-USB and 3.5mm, alongside a separate USB-A cable for charging. The Lightning cable also has a three-button remote. 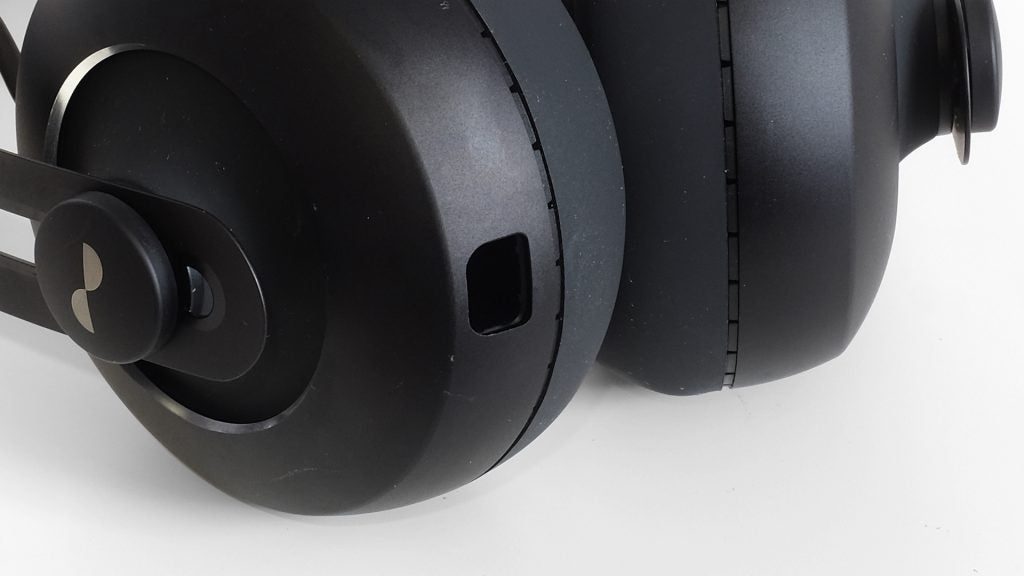 Although the headphones are quite comprehensive, there are few features lacking. There’s no way to determine the battery level – not even an LED to let you know the Nuraphone are on.

Put them on and you’ll hear a slightly odd ‘welcome back, Dave’ (where ‘Dave’ is your name) message through the earpieces. This is how you know they’re not dead. I’d prefer something more traditional.

The Nuraphone’s controls are unusual too. Each metal disc that joins the cups to the headband also doubles as a capacitive ‘button’, which can be programmed to switch between bass modes, turn the custom profile on or off, or play/pause.

There’s haptic feedback when you tap too, which feels like a motionless click. This control style earns points for ‘cool’ factor, but none for practicality. You can’t alter the volume or select tracks, and if it starts raining – as it did during a walk from the train station one night – these controls stop working. 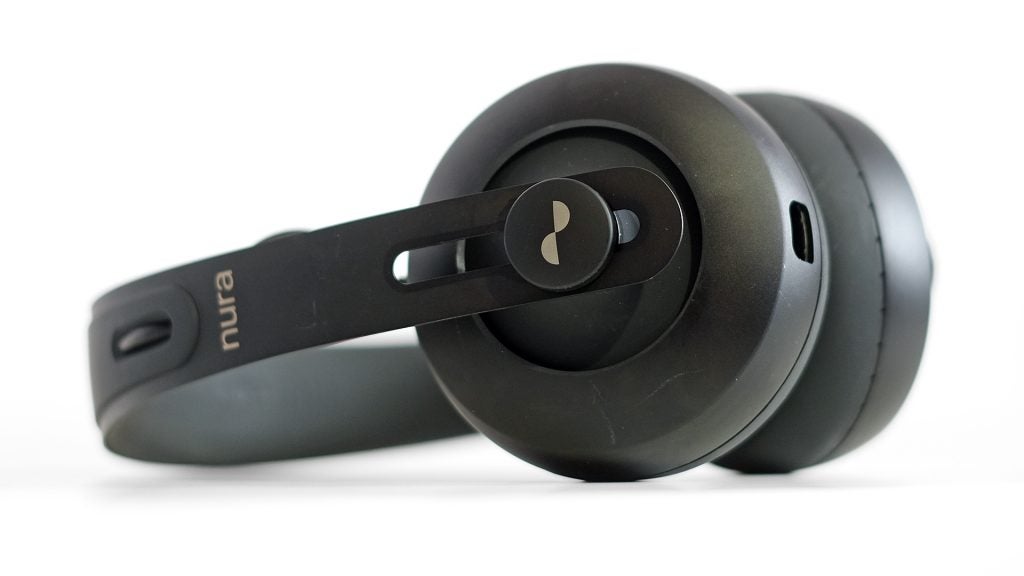 Wireless performance is very good though, and the Nuraphone support aptX HD. This gets you near-lossless sound quality when attached to an Android 8.0 phone.

The most important part of the Nuraphone is their sound customisation. It’s based on the principle that when your eardrums respond to sound, they also create a near-echo of that sound, but at a tiny, tiny fraction of the volume.

To get started, Nura’s setup app pipes through a series of test tones. Microphones in the earpieces then receive your ears’ reactions to these tones. The process only takes a couple of minutes. Nura says it’s similar to the automated otoacoustic emissions test performed on babies to check their hearing.

The result is a sound profile, complete with a neat digital representation of your hearing, which looks like a little piece of artwork. It’s rather pretty, but bears no obvious relation to how well you hear.

The app lets you switch between your profile and a generic one. Unfortunately, since the generic one sounds worse than any £350 pair of headphones I’ve ever used, it isn’t really a useful comparison.

I convinced a friend to have their ears profiled and, sure enough, the resulting sound signature was distinctly different to mine. Theirs had less prominent treble and an altered mid-range curve. They preferred their profile; I preferred mine. The Nuraphone’s sound customisation is the real deal.

The app also lets you turn on a feature called Immersion, which is effectively a bass enhancer. These headphones combine drivers in the earpieces for the highs, with larger, subwoofer-style drivers in the cups. The Immersion effect is applied by the over-ear drivers.

You can choose the level of this effect. At maximum settings it’s painfully pronounced and quite an assault on the ears. It reminded me of the Skullcandy Crusher, but with better bass quality.

The Immersion effect might suit bassheads or movie-watchers, but you’ll get the most balanced sound with it on very low – or turned off.

At 15-20 hours, battery life is fair but only half that of the longest-lasting Beats Studio 3 Wireless headphones.

In July 2018, Nuraphone released the G2 firmware update. Besides the standard performance tweaks and app improvements, this update also brought a few new elements to the headphones. These vary in effectiveness and usefulness, but it’s nice to see a company tweak its product after launch. It says a lot about their attitude.

The headline update feature is the addition of noise cancellation. The Nuraphone now promises to help eliminate low frequencies. This isn’t hugely effective, but that’s not really a criticism, since the Nuraphone’s passive noise insulation was already very good. Still, every little helps.

There is also a ‘social’ mode, which offers ambient passthrough so you can listen to the outside world without removing your headphones. It’s a feature we first encountered on the Sony MDR-1000X a couple of years ago, and it’s good to see more headphones adopting it.

The touch-sensitive buttons have been tweaked to prevent accidental triggers. There’s also a new option to add single-tap and double-tap commands. Sadly these two additions sometimes cancel each other out – the headphones can be resistant to double taps. Still, it’s an interesting way to add more features to the headphone body, which otherwise would be limited to the app.

As a result of the sound customisation, your experience may vary from mine. However, the sound signature that the Nuraphone aim for is superb.

I’ve compared these headphones with around 10 rivals’ pairs, and the tailored tuning smoothes and emphasises parts of the mids and treble in a way that’s immediately appealing. My profile sounds most similar to the Audio-Technica ATH-MSR7, but with the uncompromising hardness in the high mids and treble softened, so the sound isn’t tiring.

In my profile, there’s greater bite to the treble than the Sennheiser Momentum 2.0. I’m often a fan of slightly brighter-sounding headphones, something the profiling process appears to have identified. 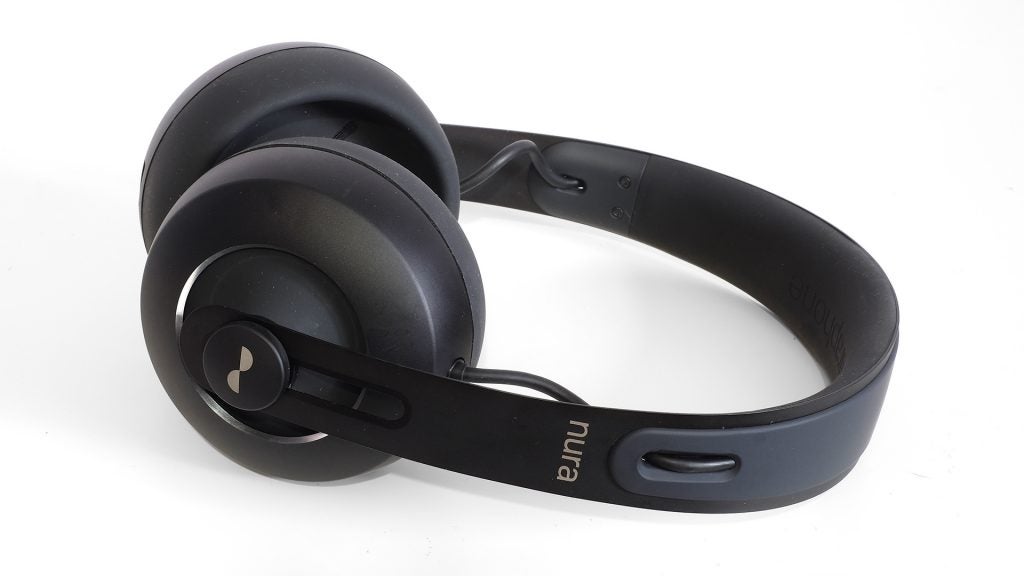 Your ears do bed into slight variances in tuning fairly quickly though. What separates the very good from the best at this level are elements such as dynamics, separation and soundstage scale.

The Nuraphone are great at all three. With a large driver and an in-ear driver working as a team, these headphones offer a sound width that’s on the level of full-size headphones, not earphones. Plus, unless you use the Immersion mode at a high setting, there’s no sense of dislocation between the two drivers.

Unplugging the in-ear part, you can listen to what the outer driver actually does. It deals solely with bass and lower mids, leaving the treble to the driver that sits in your ear canal.

Bass is rich and luxurious, without any boominess or scene-stealing. It’s also the bass that appears to change the least between profiles, perhaps because it’s the mids and treble that have a greater impact on the character of the sound. I wouldn’t call these studio mastering-level headphones, since they aim for a mainstream sound signature with slightly elevated bass presence. However, among street headphones they’re very tasteful indeed.

I haven’t found anything that I dislike about the Nuraphone’s sound. They’re a delight, although once you’ve broken through the ear-charming spell of the sound customisation, you’ll begin to hear some slight deficiencies.

The bass isn’t incredibly fast, with the likes of the Oppo PM-3 displaying more intricate mid-range detail. You’ll have to listen pretty carefully to appreciate this though.

The combo of an in-ear driver and outer bass driver also has an impact on the presentation of the central channel, which invariably features a lot of content that falls within the in-ear driver’s remit. Vocals end up more centralised, and a little smaller-sounding than when delivered through the best conventional over-ear headphones.

However, thanks to the great integration of the drivers, this can actually help to improve the perception of the scale of the overall soundstage. 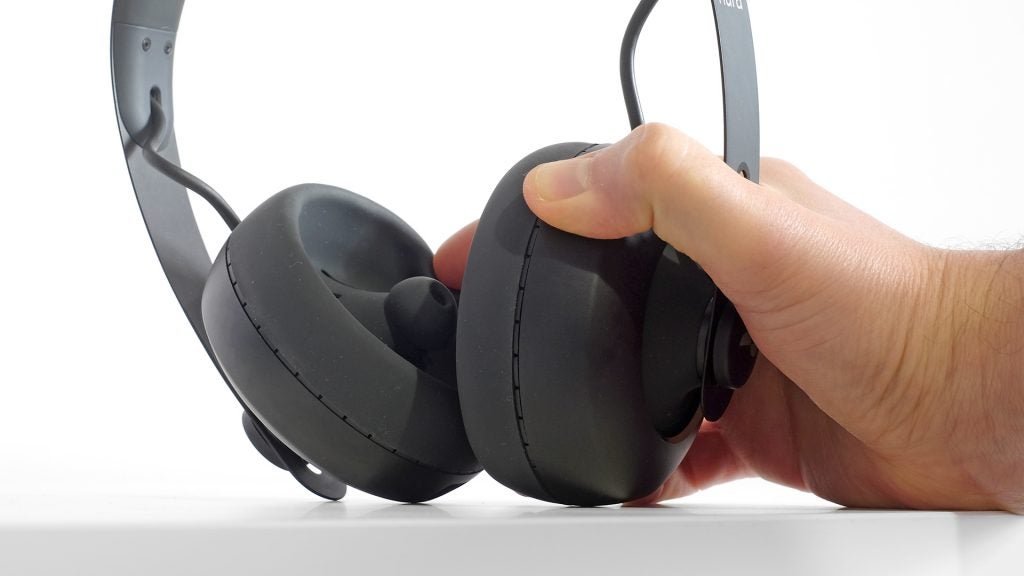 Should I buy the Nuraphone?

The Nuraphone are a bold set of headphones, which go beyond simply capitalising on current trends in the market. Their tech sounds like the stuff of fantasy – but it’s real, and it works.

Unfortunately, most of the issues stem from things you can only appreciate with a proper test drive. While the bizarre in-ear/over-ear setup has been expertly designed, the feeling of having something in your ear doesn’t dissipate as it does with normal in-ear headphones. And the exposed capacitive controls just aren’t a good idea in a country where it regularly rains. Los Angeles? Sure. London? Not so much.

If you’ve been charmed by the tech then go ahead. It works, and makes these some of the best-sounding street headphones you’ll find.

The Nuraphone feature sci-fi tech, tuning the sound to suit your ears.