Nubs’ Adventure sounds more like the opening to a reconstruction on Crimewatch than it does the first few minutes of a mobile game. Minding your own business while sat inside your cliff top house, your abode is suddenly invaded by two robbers who, in the process of trashing your possessions at their will, kick you off said cliff seemingly to your death. Surviving this assault, you work your way back up to your home to find it ablaze, your world burnt to cinders.

Considering Nubs’ Adventure’s deliberately cute and cuddly pixel art style – Nubs himself little more than a white blob with a head on top – it says something that these opening moments carry with them a genuine amount of emotion. Before you’re even told how to control the game, you’re treated to a moment where the life of its lead is torn apart. It’s a frankly startling way to begin an adventure, sitting entirely at odds with an industry obsessed with tutorials, gentle openings and onboarding, but one thing it does serve as is motivation.

Motivation to wander through its 2D stages, through its boss battles, in order for Nubs to rebuild his house and start his life again. Using virtual controls as basic as they are effective, at Nubs’ disposal are typical platforming staples – the ability to walk, the ability to jump, and the ability to fight, albeit via the form of a boomerang. 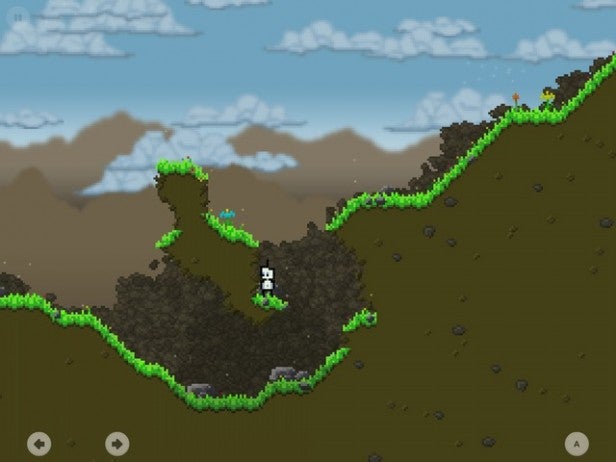 Without explanation, Nubs’ Adventure makes tossing said stick into the air its unique selling point. When a target it is range – the levels of Nubs’ Adventure patrolled by seemingly harmless looking enemies, but each one capable of splitting Nub in two without remorse – it’s marked on screen, with the game’s action button causing Nubs to throw his boomerang and, temporarily, knock his foe out of action. Other traps include spikes and platforms designed to squash you, further adding to the feeling that Nubs’ Adventure is a take on the original Sonic the Hedgehog, albeit on half speed.

Indeed, even the boss battles have much in common with Sega’s 16-bit classic, though rather than jumping on the contraptions sent out to kill you, you control a giant worm that bursts from the ground below to do your bidding. It’s another slightly bizarre facet of Nubs’ Adventure’s play that’s woven in without explanation, and while all these elements initially appear to lavish the game with a much needed sense of character, when compared to the fairly standard and uninspiring nature of the platform play itself – jumping between platforms before making your way to the stage’s exit serving as Nubs’ Adventure’s signature – they feel a little out of place.

Which all adds to the feeling here that what Nubs’ Adventure serves up, whether intended or not, is a fairly average platformer that’s bolstered by an interesting, if slightly disjointed, plot. It’s almost as if the developer behind it, ImakeGames, needs to be taken under the wing of a more experienced, dare we say it more commercial enterprise. There are undoubtedly a whole host of good ideas contained within Nubs’ Adventure, and the boldest of the game’s opening moments should not be underestimated: the world of mobile games would be far richer if other studios took a similarly creative, similarly brave approach to welcoming players to their fold. 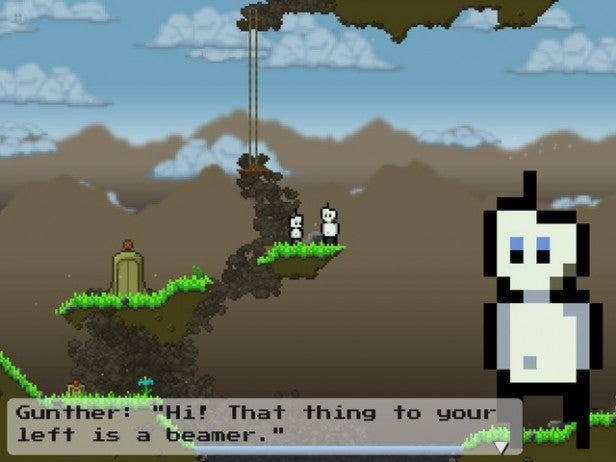 However, that doesn’t excuse the rest of the game for being disappointingly by the numbers. That’s the contradiction that runs throughout the game: in terms of pitch, Nubs’ Adventure is refreshingly original, but in terms of play, this is a platformer that could have popped up at any point during the last 25 years or so, and while that means it’s immediately playable for anyone who has had even a passing interest in games during that period, it also means that there’s nothing new here. Those opening minutes aside, Nubs’ Adventure is a touch forgettable, and that can only feel like a massive missed opportunity considering how promising and progressive a start it enjoys.

Verdict
Macabre and damned depressing at times, Nubs’ Adventure’s sombre opening is sadly not met by any real originality when it comes to its platforming play, with the game instead deciding to fall back on genre staples that have been in place almost as long as video games themselves, undermining the fresh approach that stems from its opening moments.