A powerful and bright portable light, the Nowlight lets you charge it via solar, USB or using the pull cord on the front. It's bright enough to light up a tent, shed or even be used as a handy outside light. Expandable satellite lamps let you take light further, although they feel a touch cheap compared to the main light. Even so, this is a great light for camping or areas that don't have power.

Whether you’re going camping or have a garage or shed without power, lighting is one of the trickiest things to sort out. The Nowlight aims to get around the problem with a battery-powered light that you can charge by tugging on the cable. While there are solar and USB charging options in the box, the pull to charge system means that you can get a burst of additional light when you’re far from a power socket or the sun’s not shining.

Extendible with additional pendant lights, the Nowlight is a great tool for campers or outbuildings, but it needs a firm place to hang so that you use muscle power to charge it.

Decked out in translucent plastic, the cuboid Nowlight (163mm x 93mm x 93mm) looks very much like many other outside lights, bar the one big difference: the plastic loop hanging off the bottom. This is the charging pull, which you tug on to generate electricity and top the battery up. It starts out translucent white but, disappointingly, it yellows very quickly in the sun.

On top of the light is the holder, which can take a hook through the back. You can also screw the hook (provided) into the hole on top, and use this to hang the Nowlight. You can also use the shoelace in the box, so that you can hang the Nowlight where you want it. Just make sure that whatever you attach the light to is secure, as you need a bit of force to pull the charging pull. 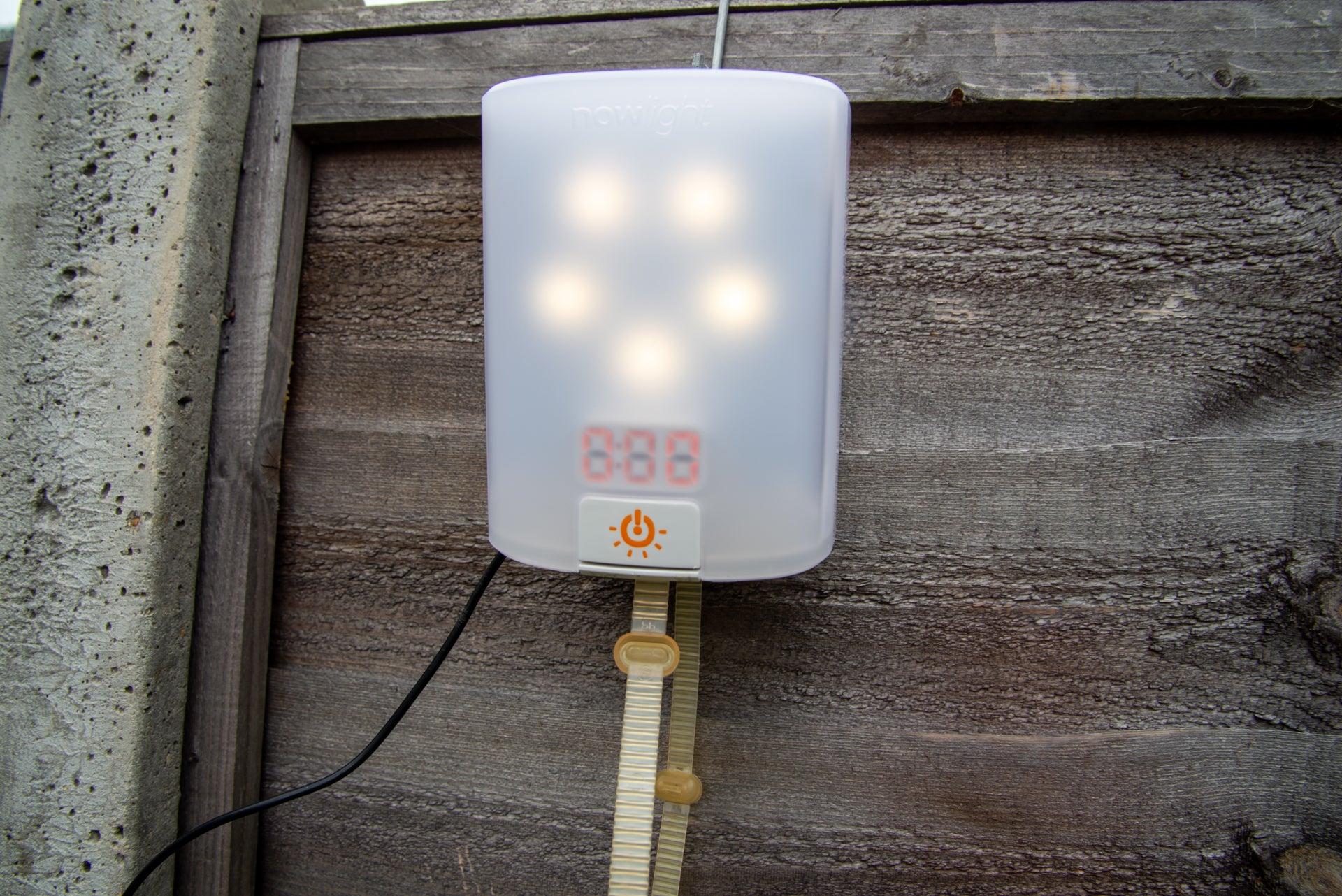 With an IP33 rating, the Nowlight is splashproof from above and the sides, but not underneath. For that reason, it’s not recommended that you leave the light outside for prolonged periods, but carry it out when you need to use it.

To charge the light, you can just tug on the cable at the front. This will start to charge the battery inside, showing the percentage amount on front. When the battery is low, the Nowlight will show ‘Pull’ on the front of it. 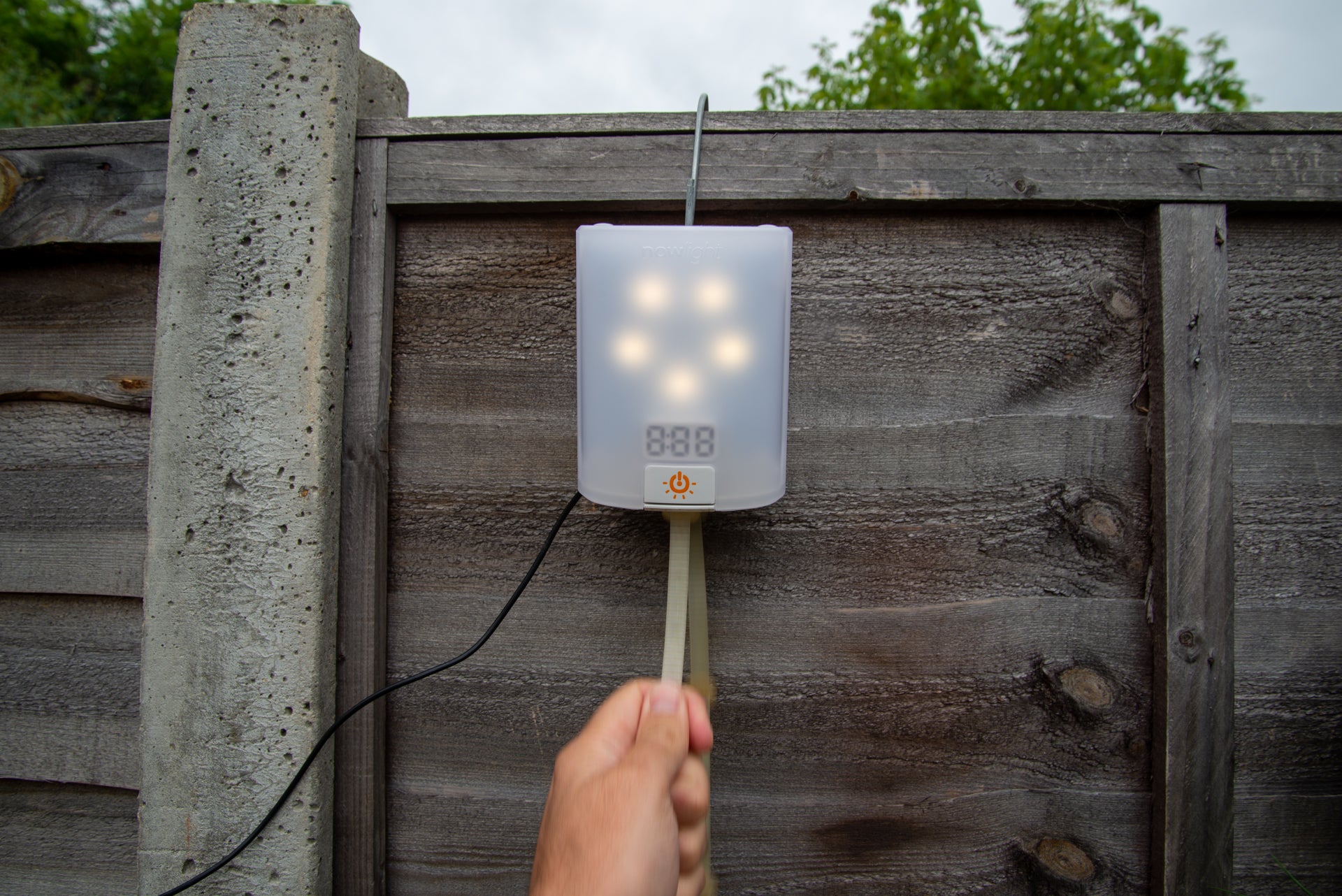 It’s not too tiring to pull the cable, with two minutes of charge giving up to 1h 40m of light at 20 lumens, or 25m at the brighter 80 lumens setting. Getting the battery up to full charge this way is another thing, as it will take a lot of pulling to get the full battery charge, which can last for up to 50 hours. Switching between brightness settings is as simple as pressing the button on the front, which cycles through the six brightness options (5, 10, 20, 40, 80 and 160 lumens).

There are alternatives, though. First, there’s a USB charging cable in the box, which will fully-charge the battery in around five hours. You can also use the provided solar panel to keep the Nowlight topped up. 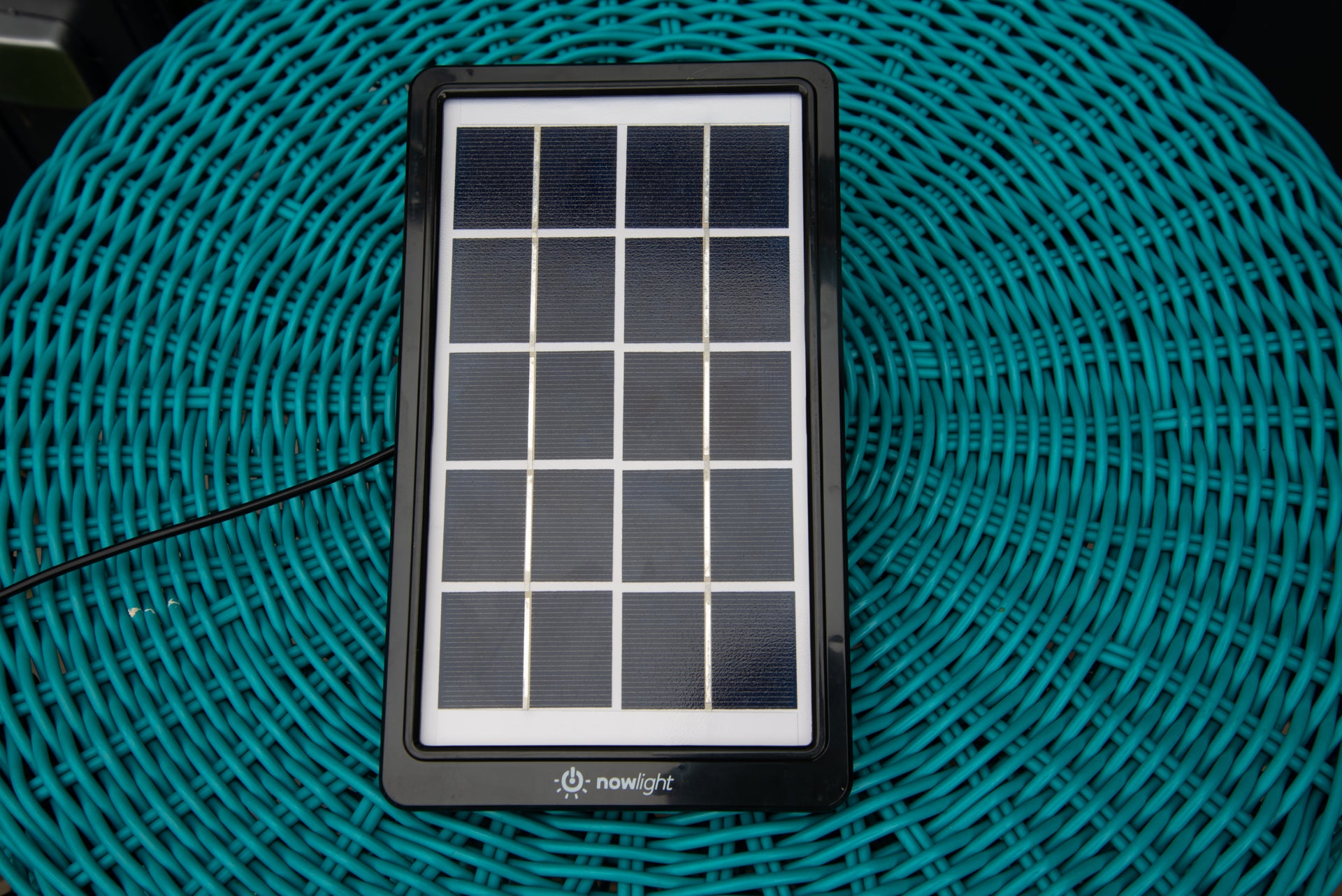 There’s a USB output underneath, which can be used to charge a mobile phone. A full battery should give you a full charge, although you can use a bit of elbow grease if you need to top your phone up for quick emergency phone call. I recommend carrying a battery pack with you if you regularly need to charge your phone. 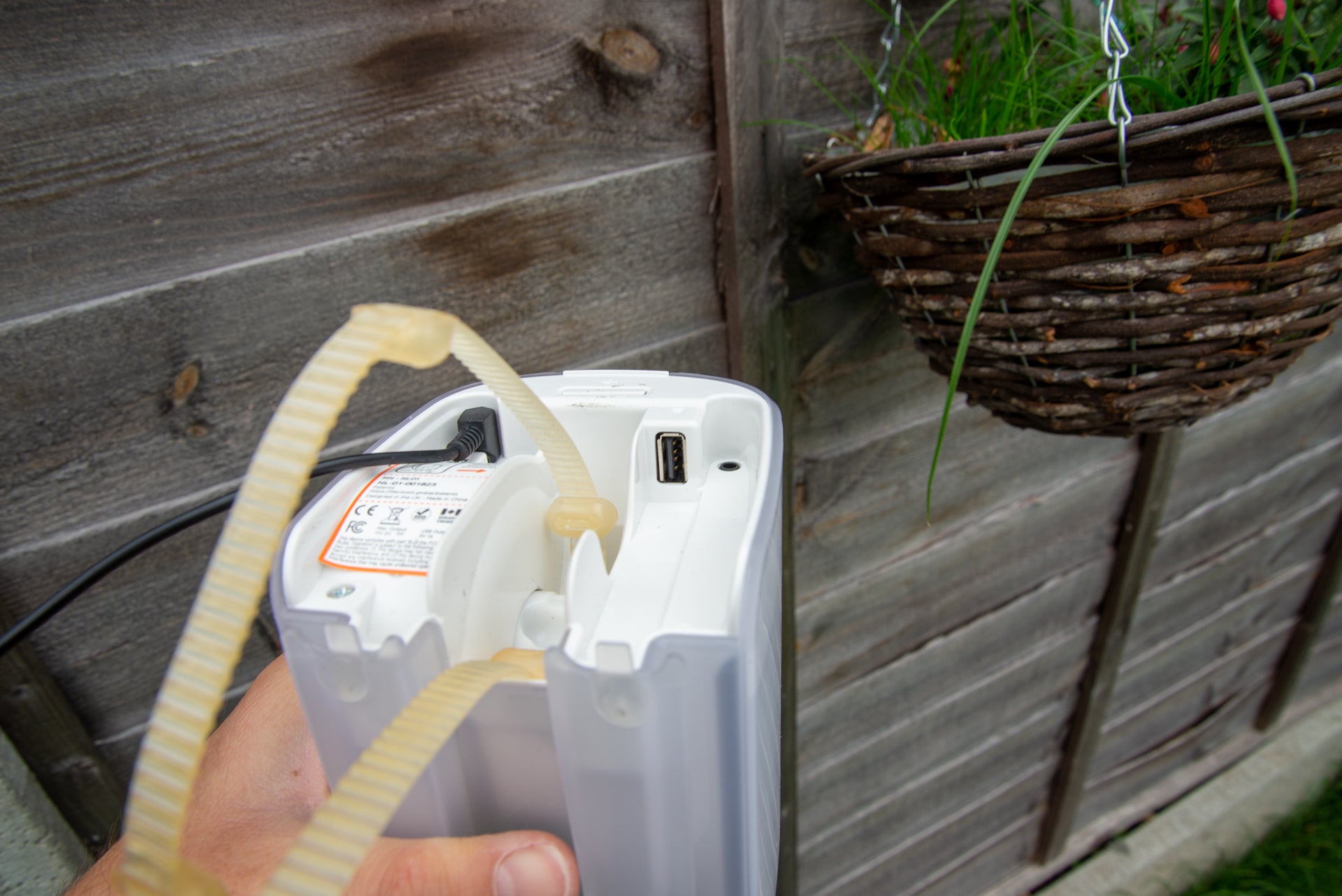 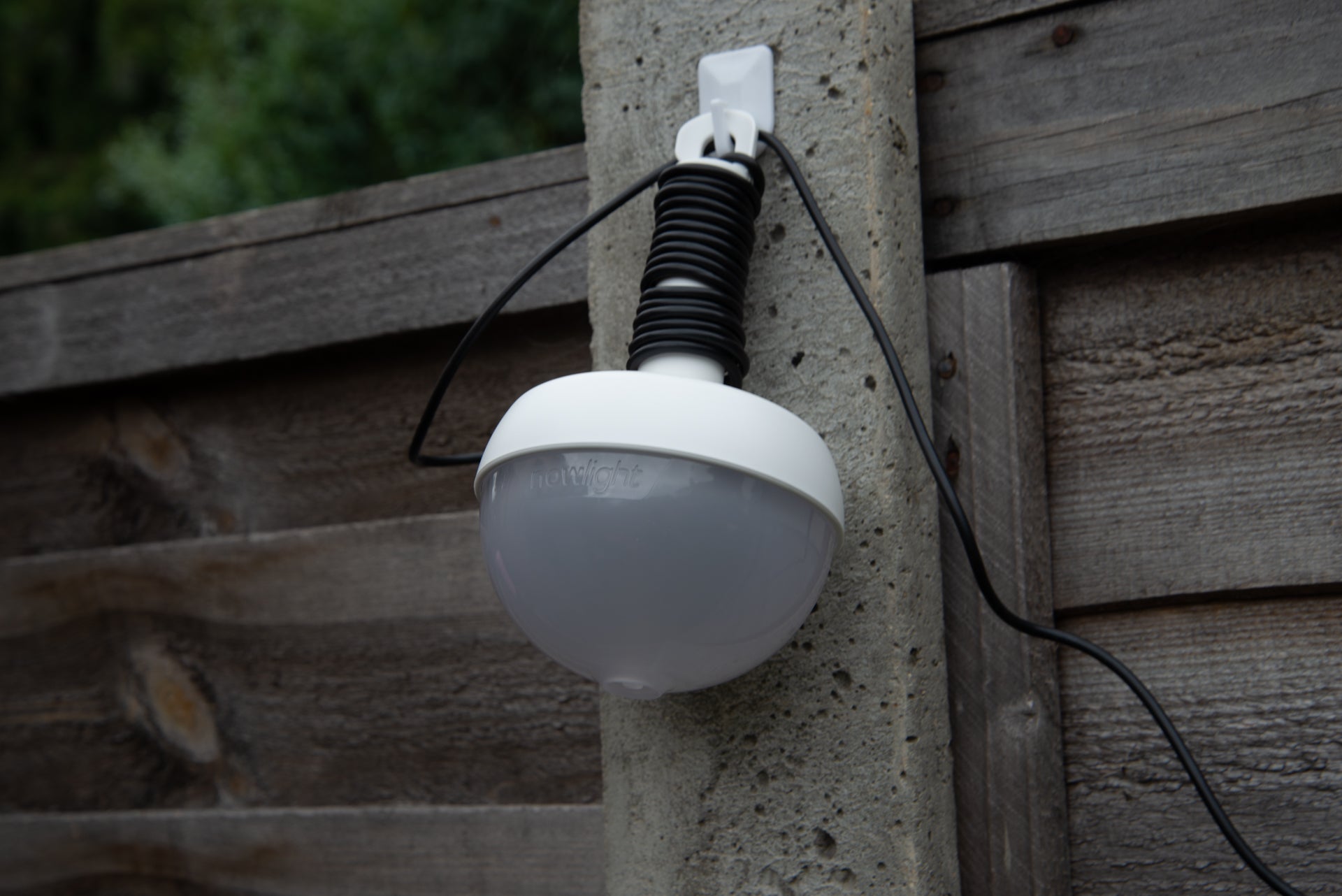 The satellites are a bit plasticky, and feel cheaper than the main lamp. They also only have a hook on the end for hanging and, again, a few more positioning options would have been nice.

You can daisy-chain four satellite lamps together, and each one has its own light control. It’s a shame that you can’t turn on all of the lights via a single control, though. The more lights you have on, the quicker the battery will drain, however.

You also can’t use the satellites when the battery drops to around 2% charge, as the system is no longer capable of operating at the required voltage.

When you power the Nowlight on, it goes from a dim light that’s alright for a bit of close-up reading or moving around a tent, to a far brighter light that’ll light up a space to let you really see what you’re doing. I used my Nowlight in the loft, and it proved brighter and better than the simple battery-powered LED lights that I had before. And, of course, you can double the light output with the addition of the satellite lamp, too. 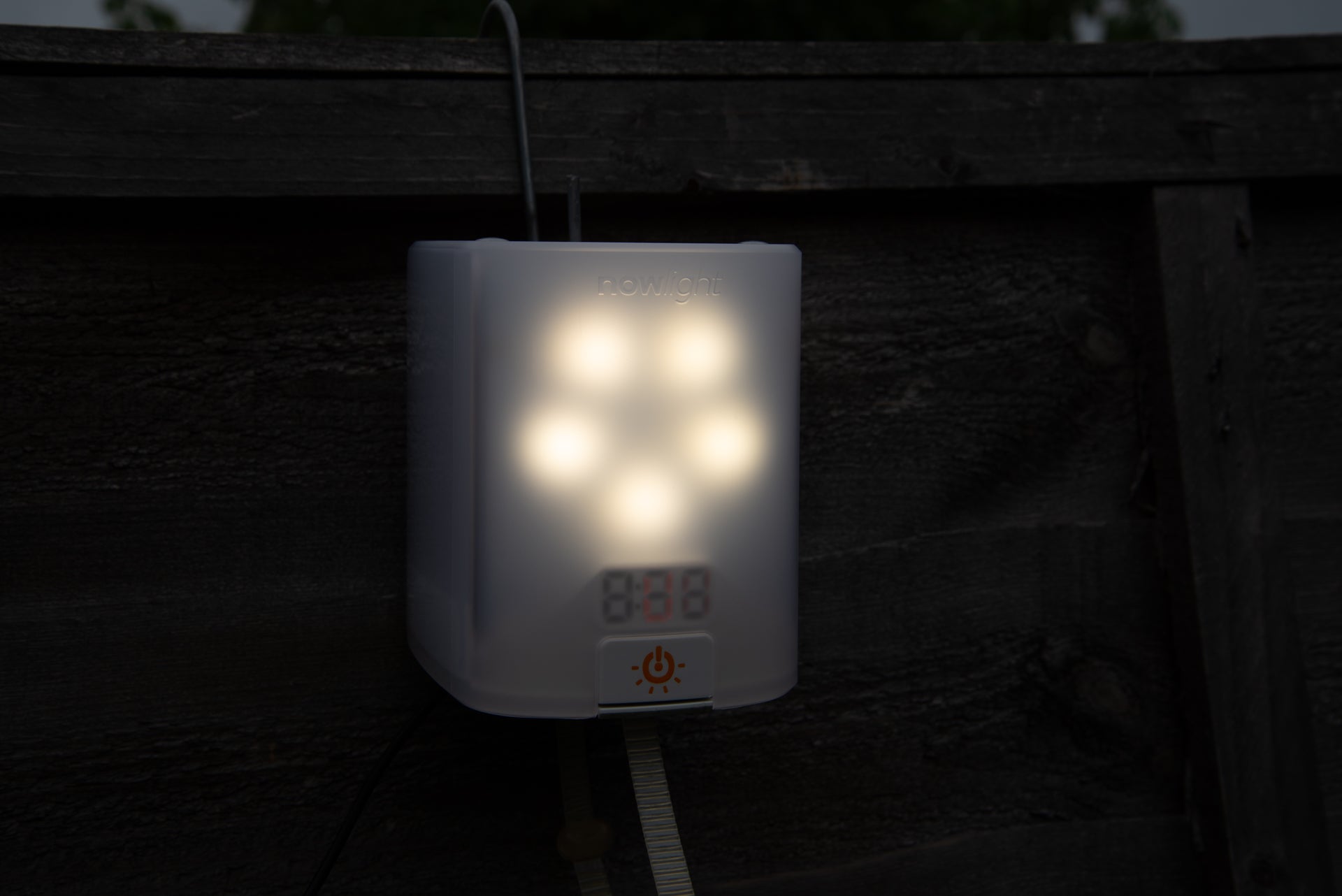 Thanks to the translucent covering on the front, the Nowlight’s LEDs aren’t dazzling, but shine out in a diffused way. It’s a nice touch and one that make this product more useful to use in enclosed situations where you may be close to it.

Should I buy the Nowlight?

If you need a bright light where you don’t have power, such as in a loft or when you’re camping, the Nowlight is a great lamp. You can take it fully charged and ready to go, but solar panels and pull-chord mean that you can keep it topped up when there’s no other power source nearby. That’s incredibly useful as when you stumble into a darkened tent and find that the battery has gone, you can give a quick top-up to carry on.

As well as buying a kit for yourself, you can buy a Nowlight to be donated to humanitarian causes, for households displaced by natural disasters and conflict. Donation price is half that of a regular Nowlight, and is a neat way to make a difference to people, as well as getting yourself a flexible utility lamp.