A great tool for non-committal Sky TV fans on a budget, the lack of Full HD content is a shame, but it's nice to finally see Netflix arrive on the platform.

What is the Now TV Smart Stick?

Its focus is, naturally, Sky’s own content, with the option to subscribe to entertainment, movie or sports packages on an ad-hoc basis, as well as offering apps for all the UK’s catch-up TV services.

It gets a refreshed interface compared with its predecessor, plus the ability to pause and rewind a handful of live TV channels, based on your subscription options.

This is the simplest way to add Now TV to your home, although if you want to combine streaming smarts with Freeview, check out the Now TV Smart Box.

More recently, Sky has added the Netflix box to the Smart Stick, so you can watch your streaming content as well any Now TV subscription content. 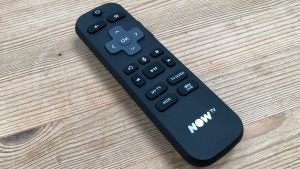 It’s pretty slim, as far as streaming devices of its ilk go, which makes it easy to accommodate into rather snug back panels. That’s a good thing, as there’s no HDMI extender in the box – if you need one, you’ll have to pick one up separately.

The Smart Stick is powered via USB, which can be plugged directly into any spare USB port on your TV, or into the included mains adapter if needs be. It works entirely wirelessly over your home network this time around, with no option to hardwire via Ethernet.

A small, well-designed remote comes in the box, with all the controls you’ll need to navigate the Smart Stick’s interface. As well as the standard navigational buttons and playback controls, there are also a number of shortcut keys, to My TV (populated with anything you’ve saved or started watching) and the TV guide, alongside shortcuts to kids’ content and the Sky Store, for buying and renting more recent movies and TV shows. 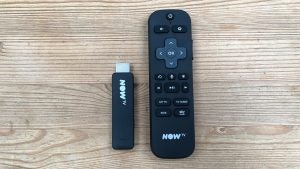 It doesn’t get much easier than the setup on the Smart Stick – simply plug it into a spare HDMI port, connect it to power and you’re up and running. The on-screen instructions will walk you through the rest, but it’s little more than choosing your Wi-Fi network and entering your Now TV account details – you’ll need to set an account up on your phone or laptop if you don’t have one.

Registering for a Now TV account doesn’t require you to pay for anything up front, nor register for any of the subscription bundles, but you will need to enter your card details for when you do – a bit like creating an Amazon account.

That’s because, similarly to Amazon’s streaming devices, the Now TV Smart Stick exists with one key purpose: to get you watching (and paying for) more of Sky’s content.

There are four different bundles you can opt for – Entertainment, Cinema, Sports, and Kids – and you’ll get the best deals by opting in to at least one of them when you buy your Smart Stick.

There are regular promotions on these packages, though, particularly if you sign up for more than one for more than a month, so it’s worth seeing what’s available.

Monthly subscriptions usually work on a rolling basis, so be aware that they will roll onto the next month unless you cancel.

The Now TV interface has had a bit of a freshen-up, but will still look very familiar to anyone who’s used Now TV, or indeed a Roku device, before.

It’s clean and simplistic in its styling, which works to its advantage for the most part, as it’s easy to use and there’s no chance of getting lost in swathes of menus. There are good content suggestions too, and I had no trouble stumbling across something I’d like to watch.

A left-hand vertical menu gives you your choices – Home serves up a selection of highlights, top boxsets and “you might have missed” picks, while Best of Catch Up suggests top content from the likes of iPlayer, ITV, All 4 and Demand 5. 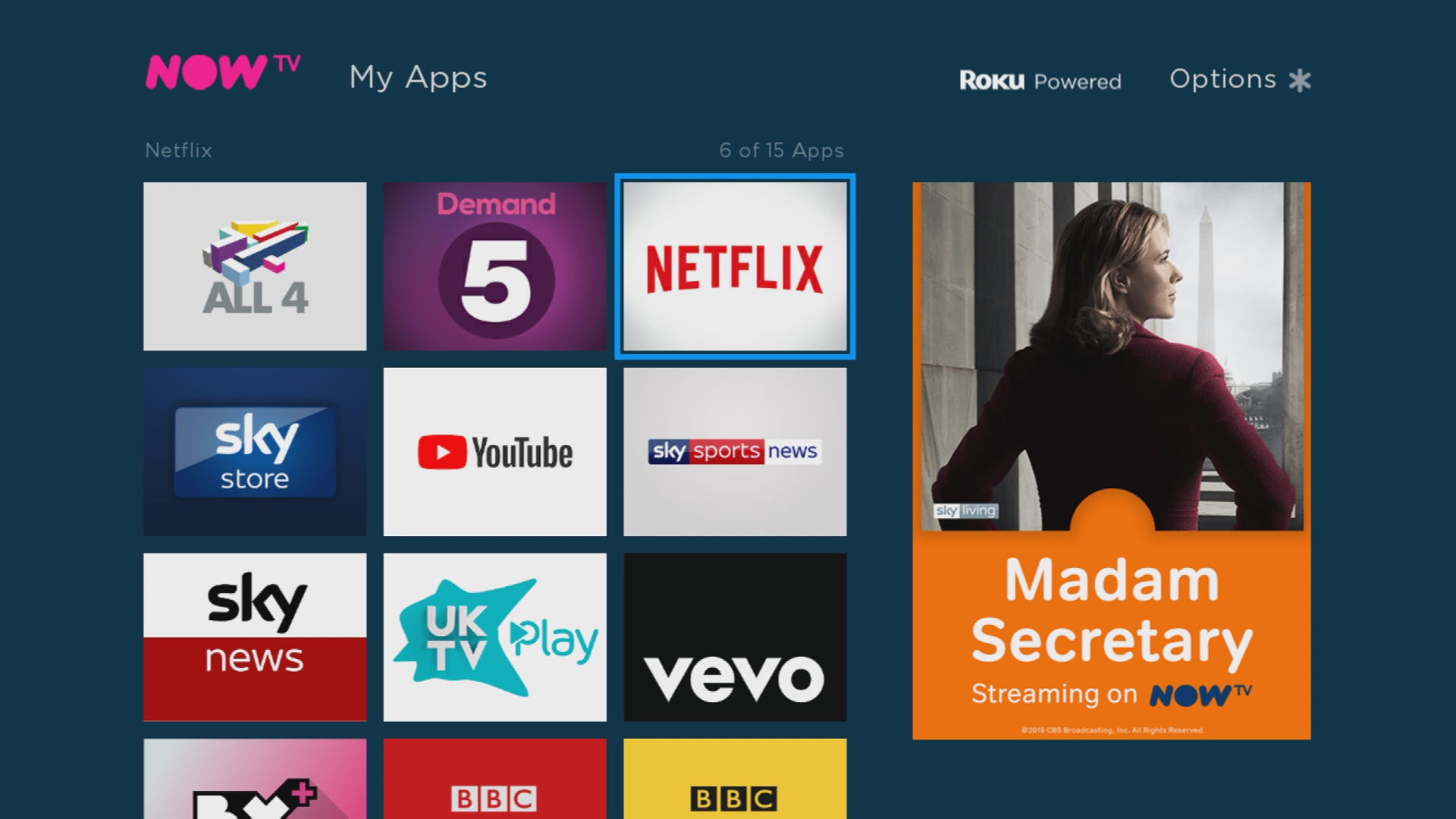 The TV Guide is where you’ll find the live content currently showing on the channels you’re subscribed to, with the option to pause and rewind it.

My Apps does what it says on the tin, and any apps you’ve downloaded to your Smart Stick will be shown here, with the App Store being the place to head if you want to add more.

That said, there’s not a lot more of note here outside the aforementioned catch-up services and Now TV’s own app, but you will find YouTube and the Sky Store among 40 or so more obsolete options. A big update has added Netflix into the mix, with the streaming service also available on Sky Q.

While Sky Q adds the Netflix content into the main UI, with the Now TV Smart Stick giving you a more traditional media stick experience: you fire up the Netflix app, sign into your account and then you can get watching. Content can be streamed at up to 1080p, as the the Smart Stick doesn’t support 4K.

The big omission here is Amazon Prime Video. For that, you’ll want to opt for the Roku Streaming Stick, though it costs more than twice the price of the Smart Stick at the time of writing. 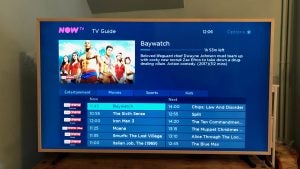 Things just don’t run as smoothly – icons take a second or two to load as you move through pages, and playing content can take as long as 15 seconds or so to load. That’s not exactly lengthy in the grand scheme of things, but it’s a more leisurely wait than you’ll experience elsewhere.

At £15, a blazingly fast performance is perhaps not to be expected, but just be prepared for a little bit of patience if you decide to take the plunge.

Voice search is a new addition in the Smart Stick, which works pretty well for the most part. You can search by name, genre or actor, and it accurately picks up all of our requests without exception. 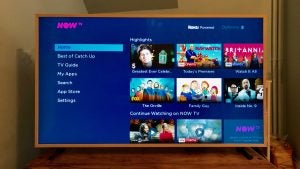 What lets it down a little, is that it can’t find any content outside Now TV’s offering, so searches for Peaky Blinders or Emmerdale, for example, will come back blank. It means it’s usability is just a little limited in comparison to more homogenous voice searches, like Amazon’s Alexa.

However, perhaps the biggest sticking point in its performance, right now at least, is its lack of 1080p Full HD content. While the Smart Stick hardware is capable of playing it, Now TV is currently only available – live and on demand – in 720p HD. In a world where 4K content is available to stream readily, this feels a little old hat.

Sky has said it plans to introduce Full HD streaming later on in the year, but for now, it does feel like the Smart Stick is missing a trick. At least the catch-up apps are available in 1080p, as long as your Wi-Fi signal is strong enough to support it. 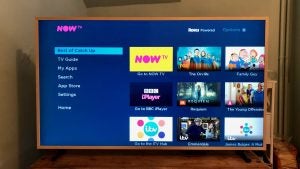 If your budget is tight and you’re keen on Sky content above all else, there’s no denying the Smart Stick offers superb value and is a great gateway to all Sky has to offer. I know my dad loves his for the convenient, no-commitment access to Sky Sports and Sky Movies, while parents of younger children will find the Kids TV bundle great value.

It’s also a cheap way to upgrade a non-smart TV too, with all of the UK’s catch-up apps to hand, plus some nice added extras in the shape of YouTube and Sky Store.

For now, though, being limited to 720p streaming feels a little stingy – even at this price – and the lack of Netflix or Amazon apps will also be a sticking point for real streaming fiends. For a little extra, the Roku Streaming Stick can give you a little more flexibility in this regard.

Once 1080p streaming lands, the Now TV Smart Stick will make a lot more sense, and become even more of a bargain.

One for non-commital Sky fans on a budget, but 1080p streaming can’t come quick enough.