What is the Novis Vita Juicer?

Centrifugal juicers have earned a bit of a bad rep for their one-size-fits-all approach but the Swiss-developed Vita Juicer could change your mind. Using self-regulating speed (up to 2000rpm) and a combination of a citrus press and a centrifuge, this multifunctional machine can produce juice with 20% more nutrients than conventional juicers, plus it can also make pureés and juice everything from hard fruit to vegetables.

Three patents, including one for its ingenuously simple Drophold non-drip spout, have gone into its smart design. There’s no recipe book in the box but purchase does give access to the Vita Club and a Novis app that features juicing ideas, from basic blends to diet and detox drinks and even mocktails, along with video guides. 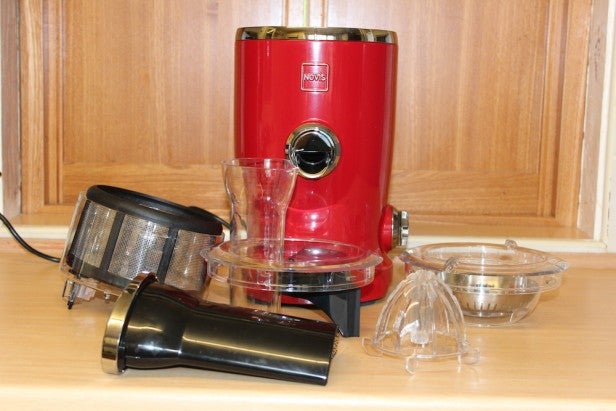 While the Vita Juicer’s die-cast aluminium casing is available in a choice of eight colours, the design is all business – you’ll find a spout, subtle branding and a side control for switching it on and off. It might not overflow with iconic status but the base unit feels reassuringly robust.

The Vita Juicer’s seamless single-colour design tends to make it visually bulky but its footprint is about average and most of the plastic attachments and blades fit snugly inside when it’s assembled rather than adding extra height. At 2.5kg, it’s a little heavier than some. Its permanent home will probably be the worktop but with a 1m flex at your disposal, it can live almost anywhere in your kitchen.

The machine can be assembled in four ways for different juicing results: juicing without the blender unit for hard fruit and vegetables, juicing with the blender unit for soft or stewed fruits that produces a pureé-style juice, the citrus press without the centrifuge for citrus juice with some pulp; and with the centrifuge for smooth citrus juice. The last two require the reamer attachment that has multiple notches for maximum juice extraction.

Novis Vita Juicer – What is it like to use?

The Vita Juicer isn’t hard to assemble but given its four functions and variety of kit that’s used for each juicing mode, it’s likely that you’ll want to keep the instructions close by for the first few months to remember which parts go where. It would be useful to see them labelled in some way or have a mini guide to hand. 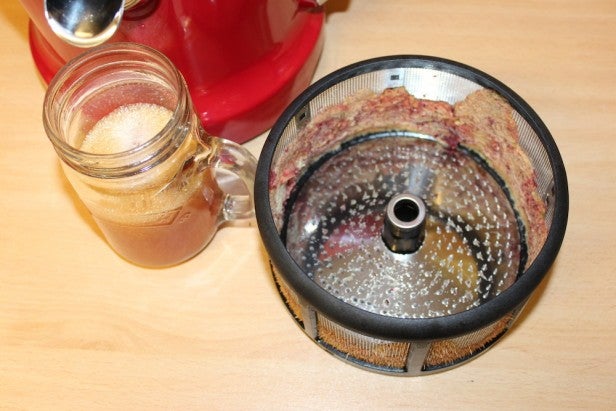 We started by juicing without the blender unit. This uses the centrifuge – a combination of a strainer with a shredder disc that locks into it – by itself. Adding halves of apple to the wide feed chute, each was processed by the spinning disc, with no need to apply pressure with the pusher.

Pulp-free juice flowed quickly from the spout and while there was some foam, the yield was very high, with only three small apples needed for a full glass of juice. The resulting juice was noticeably less acidic, sweeter and smoother than supermarket products, plus the pulp left inside the machine was minimal and almost dry. 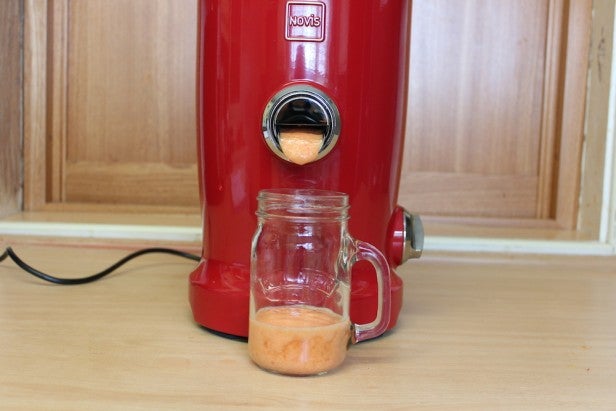 Pushing the Drophold spout up, the juice stopped flowing, resulting in no drips of juice on the worktop. Next, we added the blender unit to process some stewed nectarines. The purée was slow to emerge from the spout as it was thick and viscous – less a juice and more a sauce that could be used in desserts or smoothies. 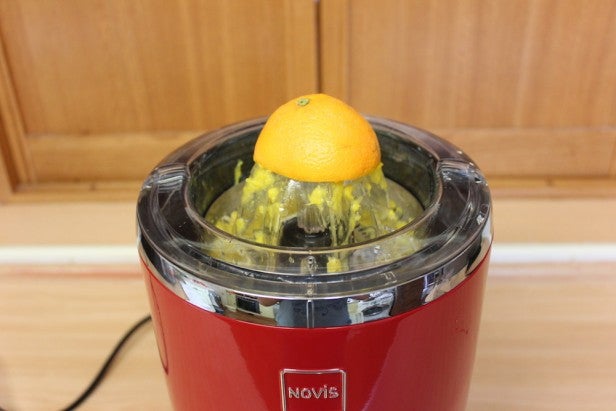 Switching to the citrus press configuration without the centrifuge, we tried making orange juice with pulp. This combines the conical reamer with a strainer to catch pips. Holding halves of orange on the reamer while it’s rotating is tricky – push down too much and the machine vibrates, hold it down too little and the fruit can spin off the reamer.

However, with practice, juicing became easier and two oranges produced a good amount of slightly foamy, fresh juice, with a small amount of pulp. Switching to the citrus press with the centrifuge, there was a comparable amount of juice and negligible amount of pulp in the strainer. 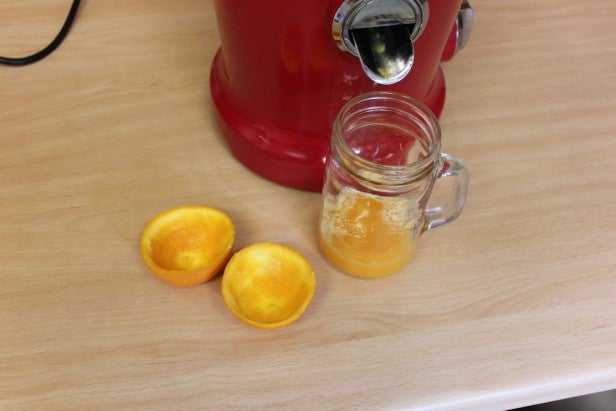 The juicer’s operation is quiet, with feet that absorb vibrations, plus clean up is easy. All the detachable parts can be popped in the dishwasher or washed by hand although it would be handy to have a brush to shift stubborn residue from the strainer. 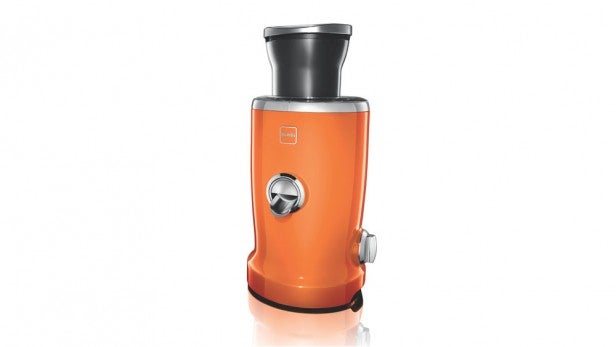 Should I buy the Novis Vita Juicer?

Centrifugal juicers vary in their yields, so if you’ve been disappointed with low amounts of juice before, the Vita Juicer is a smart upgrade. It’ll give you plenty of juice, minimal waste and the flexibility to try different pulp levels so you can experiment with blends.

Mess has been reduced from all angles, from juicing to cleaning, so using it is enticingly convenient. The app is an especially clever addition, not just removing the need for a physical recipe book, but with plenty of ideas to help you keep the juicing habit going.

Its price point might seem disproportionate but the Vita Juicer’s great results and easy operation speak for themselves.