Not Tonight is a game about Brexit. It is extremely about Brexit and it very much wants you to know this. The game’s logo contains a European flag, the trailer contains actual news footage of Nigel Farage and pro-EU protesters. The thing is, I’m not entirely sure it needs to be about Brexit, and it might well be better if it wasn’t.

You play an unnamed “person of European heritage” (not, as the game takes great pains to point out, an actual immigrant but someone whose family emigrated several generations ago). Following the Brexit vote a new far right party takes over the UK and implements an elaborate system of discrimination with implausible speed. Your citizenship is revoked, and you are forced to work for a an app called BouncR in order to scrape together enough income to not be deported.

The immediate problem here is not that Not Tonight’s dystopian vision is a bit ridiculous, it’s clearly meant to be, but that it’s all too normal. The notion of living precariously in the gig economy while risking deportation isn’t science fiction, it’s a reality for a some people, and it isn’t clear if the fictional setting helps explore this issue.

Honestly it’s all a bit weird hearing the characters spit out the word “Euro” like it’s a slur, but without exhibiting any of the actual real racism that has often characterised support for Brexit. It’s not that Not Tonight is too political, it’s that it isn’t political enough, uninterested as it is in politics before or after June 23rd 2016. 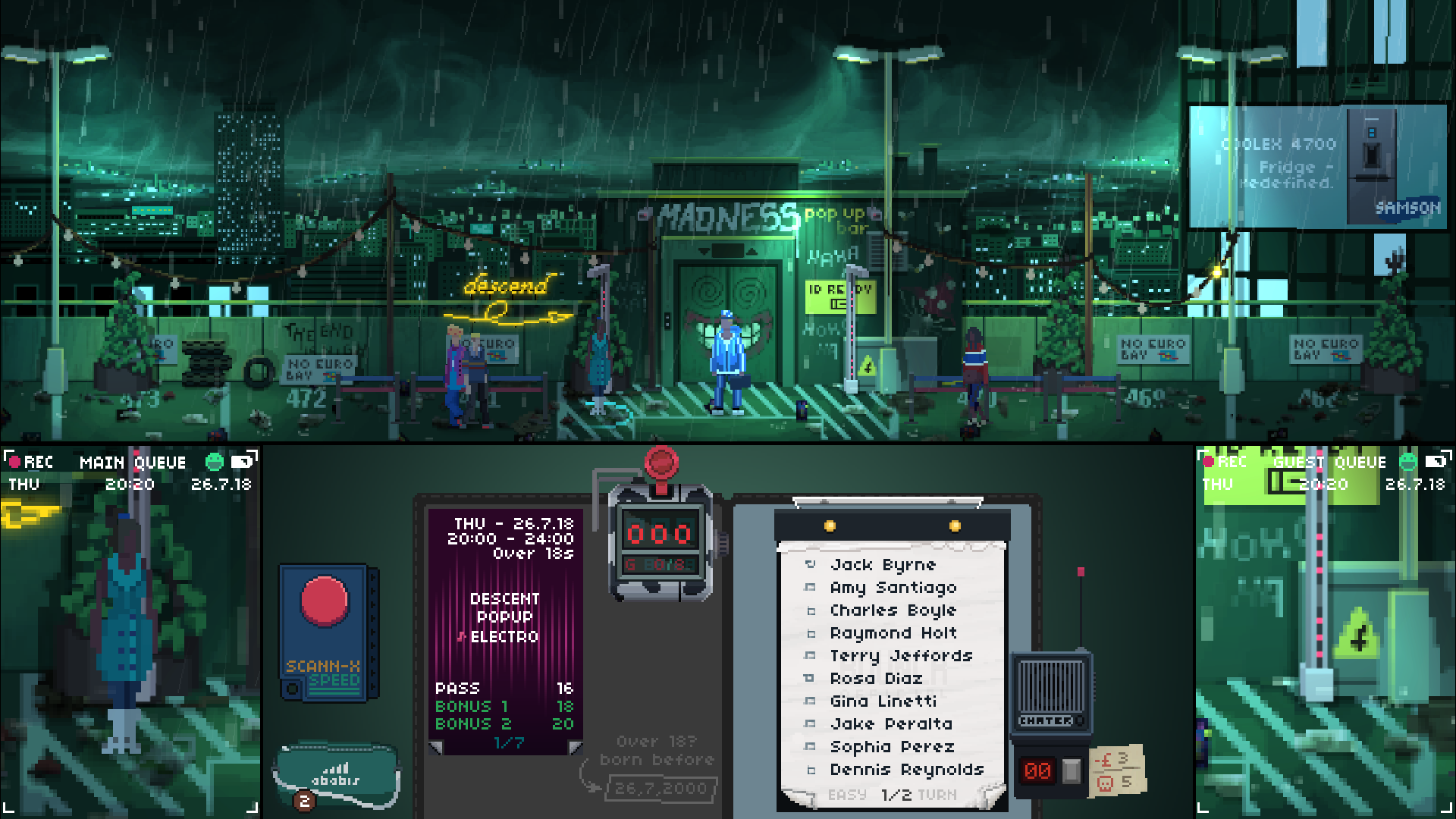 All of which is a shame, because when Not Tonight takes aim at other targets it generally hits. Whether it’s the general precarity of being an immigrant in a hostile country, the use of confusing bureaucracy as a weapon against minorities or the cheerfully dehumanising nature of the gig economy.

If anything it is far better as a general app-punk dystopia than a specifically Brexity one, with the small caveat that it’s a good deal easier to make a comfortable living on BouncR than Uber (although I did supplement my income by selling a lot of drugs). As time went on I warmed to the game more and more, before Brexit would inevitably blunder across the screen, loudly demanding to be the centre of attention.

I’ve gotten this far without mentioning Papers Please, but at this point I have to. The act of bouncing will be extremely familiar to anyone who has played Lucas Pope’s 2013 bureaucr-em-up. You scrutinise documents, scan for contraband and stamp (or in this case click) people through.

Even Papers Please’s trick of selling you keyboard shortcuts as rewards is replicated. That’s not to say there isn’t room for more than one game that uses these systems, and when you’re in the zone the two can feel quite different. 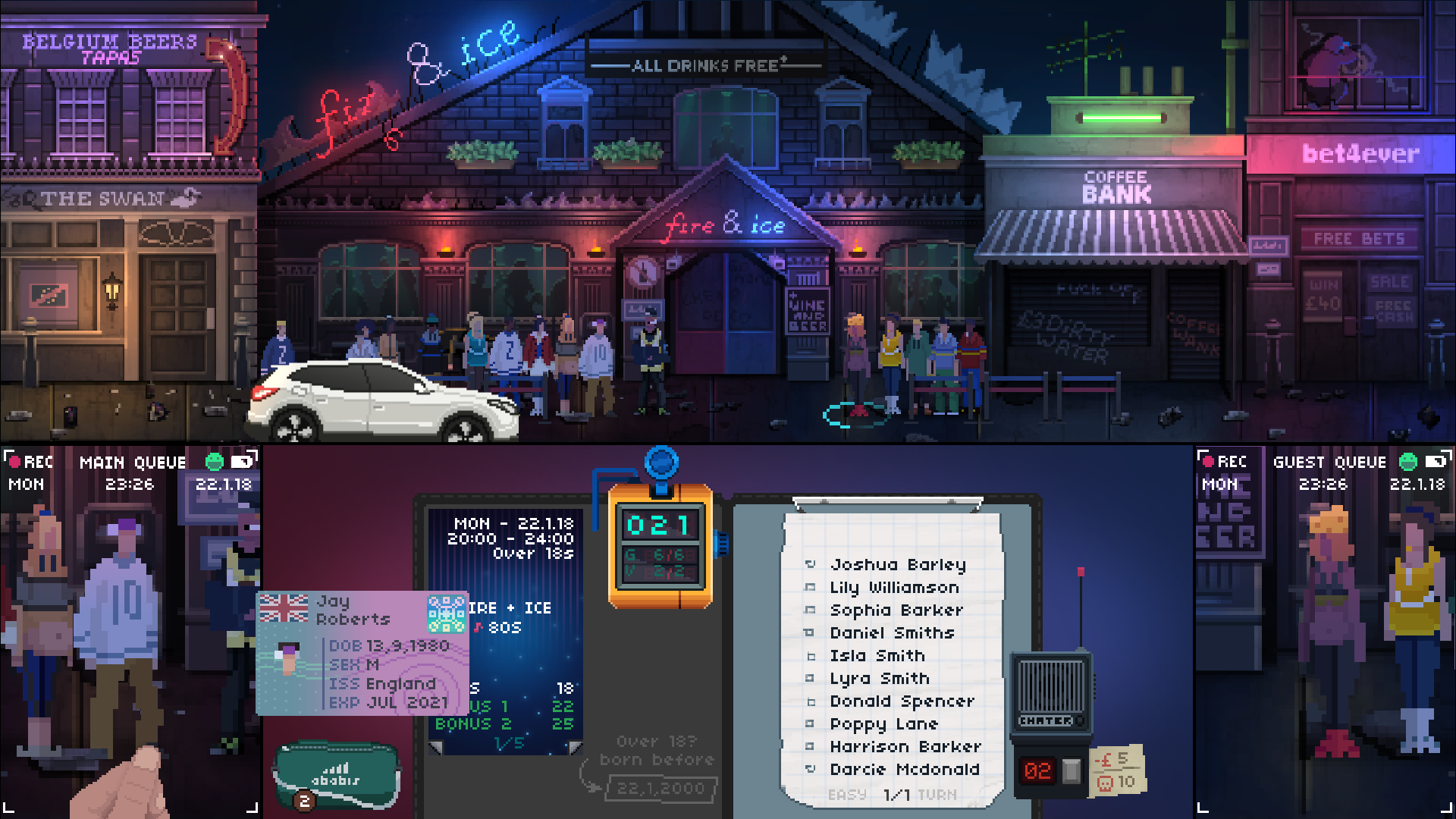 A lot of that is aesthetic. Instead of the grey blockiness of Astroyka, Not Tonight presents us with a series of lovely pixel art backdrops, somehow combining neon glow and ruined concrete in a way that evokes not “generic cyberpunk” but “run down British high street”.

Sure, you might spend most of the game staring at the clipboard in front of you, but the surprisingly colourful images of urban and suburban decay creep in via your peripheral vision and set the tone.

The soundtrack too is doing a lot of work here, it wouldn’t be a game about being a bouncer without the sound of slightly muffled music seeping out into the street. I became particularly fond of the way in which, when you let a person in, the doors open and the stifled tunes can briefly be heard full blast.

It became as much a part of my routine as the thunk of the clicker and the gentle clatter of ID cards on a clipboard, pleasingly trance like whenever my bouncing was really in the zone. Occasionally you gate-keep venues that aren’t clubs, which are both not as fun (no music) and something even the game itself struggles to cope with. At one point a rejected punter said of the entire city of London “Whatever, it’s crap anyway. I’m going next door.” 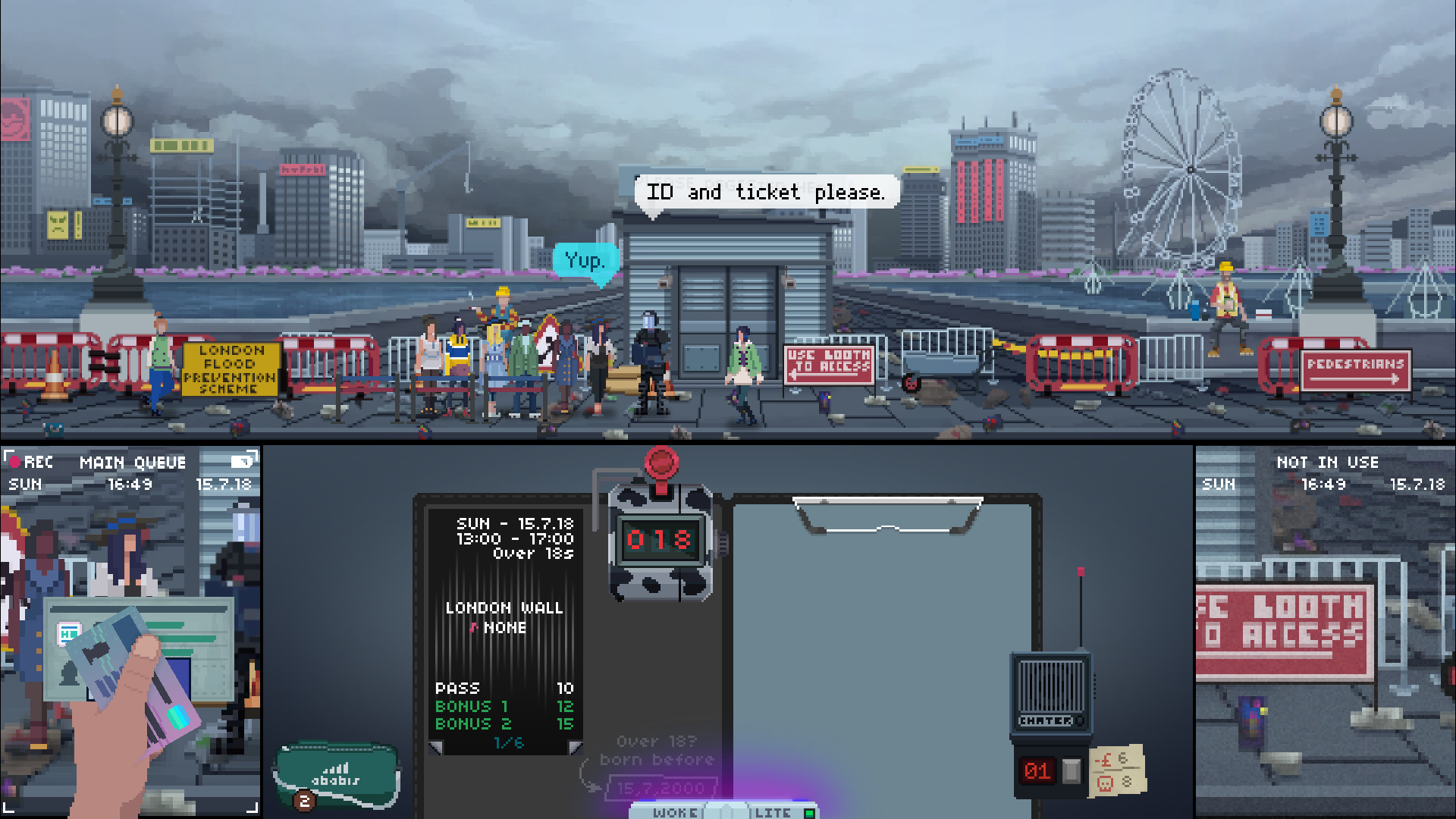 Not Tonight is at its strongest when it reduces scope a little. I was less interested in the broad strokes of rise and fall of Albion First, which I mostly encountered via news reports, than I was in seeing a comeuppance for oily immigration officer Jupp, the embodiment of petty official evil.

Over the course of the game (about 12 hours) I grew attached to a lot of the silly but endearing cast, like the friendly but oblivious Kings Head Dave or extremely non-covert resistance agent Galahad. Some of these characters have small sub stories, usually involving presenting them with an item you’ve earned by doing a series of jobs at a certain location.

My favourite was Shannon, the perennially unconvincing underage drinker who shows up in every act with a new lie and a new music interest. It’s possible to miss most of these stories, and more than once I ended up holding a picture of a dog at the end of the month, uncertain who I was supposed to give it to. That’s the part of Not Tonight that most tempts me back, the chance to do a perfect run where I hoover up those little nuggets of story that I missed.

Not Tonight proves that the Papers Please formula can work in a less soviet setting, but the experience is slightly diminished by the transplant. Yet it’s eccentricities remain endearing, with characters, landscapes and a haunting sound of muffled music that will be rambling around my skull for a little while yet.