There can be no doubt at the time of this writing the US and the UK political scenes are looking substantially off-the-wall than in recent years. Over here, the leader of the Labour Party is lionized by some and dismissed as a nutjob by others, but it’s undeniable he’s made following PMQs interesting. In the States, Donald Trump and Bernie Sanders have been called everything from ‘mavericks’ to ‘cranks’, but once again, they’re certainly shaking up ‘the established way of doing things’.

If only Bunnylord were real. He’d make the likes of Trump and Sanders look positively mainstream. 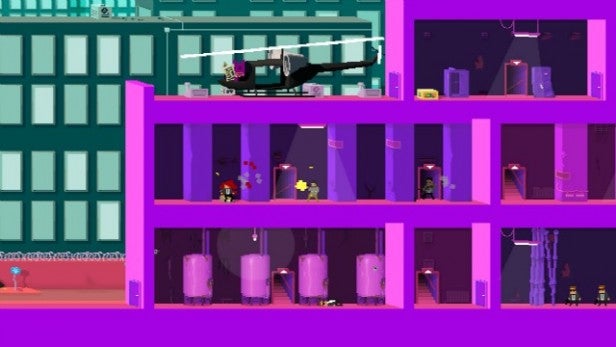 Bunnylord is a humanoid from the future who just happens to have the head of a large purple rabbit. As the game opens, he embarks on a campaign to become mayor because if he doesn’t, terrible things will befall humankind. Or something.

To that end, he begins a campaign, which includes wiping out mobsters and drug dealers, and collecting wind chimes and turning on billboards. Just because. 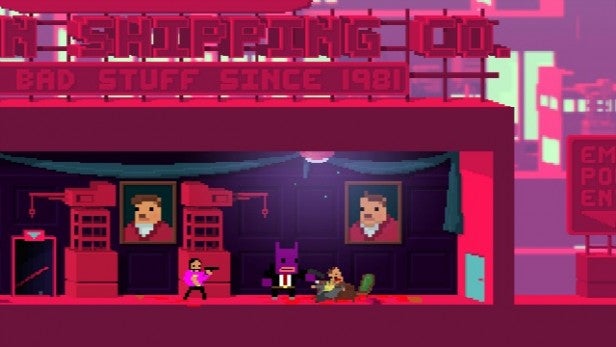 The people who Bunnylord uses to do this are controlled by you and, as one would expect from a sidescrolling shooter published by Devolver, they leave a veritable mountain of corpses behind them.

As the game progresses you’ll unlock a list of characters (I’ll call them ‘campaigners’ from here on in) with a decent variety of abilities. There’s Stanley, who is slow but has a high rate of fire. There’s Cletus, whose shotgun blasts enemies back and blows open doors. Clive is probably my favourite; he dual-wields guns and can fire in both directions at the same time.

Aside from their different abilities, all of the campaigners handle pretty much the same; they can shoot, run and slide into cover or under enemies tripping them up. Every single weapon in the game doesn’t feel over powered, but fire it at an enemy and their innards or head explodes in a fountain of pixelated claret. Knock an enemy over and it’s possible to deliver a gruesome coup-de-grace. There are also weapon power-ups – such as grenades, lasers and the like – scattered about the levels that mix up the action a little. 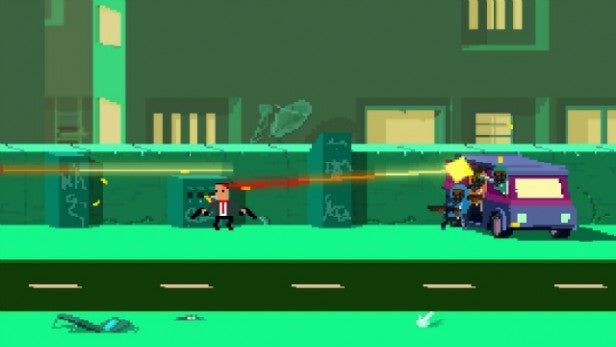 If it wasn’t for the fact that the game was presented in cartoon 8-bit visuals scored by sound and music that would be more at home in an arcade game from the 80s than on a current gen console, Not A Hero would probably be too gruesome to endure. As it is, there’s a certain cartoon atmosphere to the entire proceedings, even if the game’s final bodycount would make Quentin Tarantino wince.

The game’s mood is also kept quite light by the plot and dialogue – although the former is more of a framework for action rather the story and the latter is mainly muffled expletives and less than PC pronouncements from Bunnylord. The whole shebang comes across like the bastard child of Devolver stablemates Broforce and Hotline Miami, although it’s significantly thinner than both. 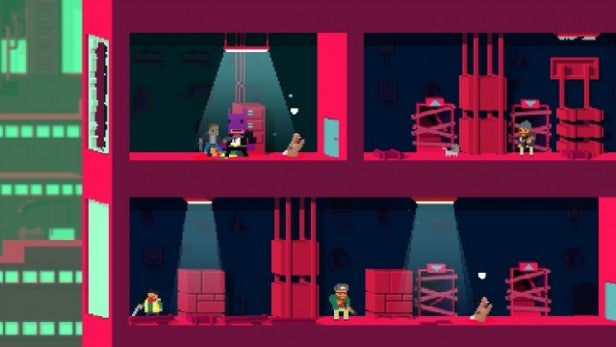 Once you clock the game, there’s little incentive to revisit it unless you want to rinse it for challenges and achievements. Each level has a series of mini-challenges – beat the level in a certain time, collect a bunch of trinkets, complete a certain amount of kills – but they aren’t really what you’d call compelling unless you’re adamant about completing the game in its entirety.

There’s also the option of going back to earlier levels with characters you hadn’t unlocked at the time in your first play through, but that’s about it. The levels are constructed as speed-run bullet-filled killboxes and they don’t take too much time to complete.

There are also a rather irritating niggle connected to the slide-and-cover mechanic. On the whole it works fine – campaigners latch to the nearest piece of cover and they can pop in and out as the player pulls the right trigger. However, if a campaigner is too close to an enemy and they hit the slide button, they run the risk of sliding straight into the barrel of a gun. Health can be stripped off in a matter of seconds and in later levels, where certain enemies can kill campaigners with one shot, this kink that send frustration levels into control-pad-smashing territory.

Oh, and if anything else, Bunnylord’s political views and campaign trail tactics will be a breath of fresh air after reading through any news about Donald Trump.