What is the Noon VR headset?


I’m starting to worry about the state of the mobile virtual-reality headset market. Not a day goes by without my receiving a press release about the latest VR headset due for release, promising to offer its wearer an unparalleled virtual-reality experience from a mobile phone.

It all started with Google Cardboard. As the name suggests, the search-engine giant created a mobile VR system where the headset itself was made entirely out of cardboard. It’s cheap to buy, easy to put together and – more importantly – offers a good taster of virtual reality, albeit a rather primitive one in comparison to the likes of the Oculus Rift, Valve’s SteamVR HTC Vive or Sony’s Project Morpheus.

Since Google unveiled Cardboard, a number of supposedly premium iterations have emerged, one of which is the Noon VR.

This mobile VR headset – currently only available in the US, but with a UK launch on the horizon – aims to offer a superior experience with its more comfortable headset. However, it falls way short of delivering what it sets out to achieve. 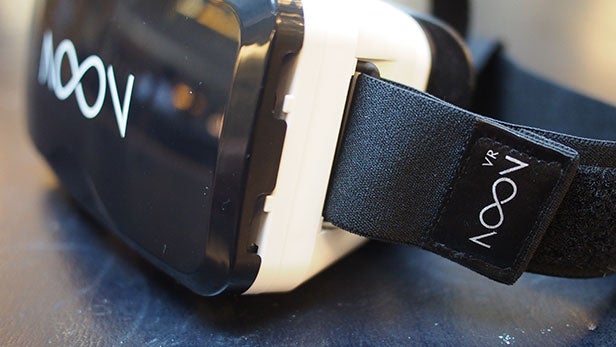 The problem with the Noon VR headset is that the company behind it has made some strange design choices, making it feel rushed and nowhere near worth the £60 (or $89.99) investment.

As soon as I lifted the Noon VR headset out of the box, one such design flaw soon became apparent; it concerned the protective cover. This black plastic panel sits on the front of the headset and, far from offering adequate protection, it fell off at the slightest touch. It’s supposed to stop the lenses from becoming too clogged up with dust, but it seems to spontaneously uncouple itself from the headset at even the slightest breeze.

When this “protective” panel flopped to the floor the first time, I noticed the second issue with the Noon VR. At the front of the Noon VR you’ll find a rubber strap that runs from the top to the bottom of the headset. It’s attached at the top and can be freed by unhooking it at the bottom. It’s beneath this that you must place your smartphone. The problem is that it neither looks nor feels secure enough to hold my £700 plus iPhone 6, or any other phone for that matter. 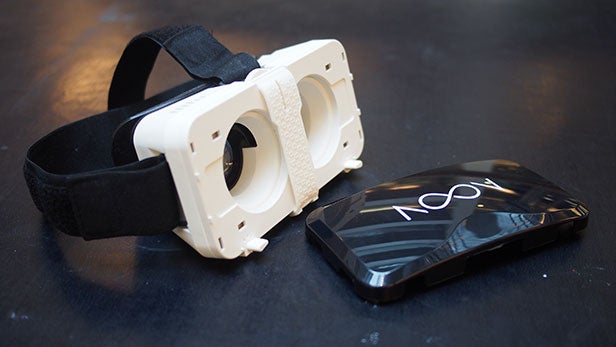 Tentatively slotting in my iPhone 6 only served to reaffirm my initial fears. While it sat firmly to begin with, it’s easy for the phone to slip out of place – and this is especially true when you start to move around.

What also isn’t clear is whether this is in an optimum position for a good VR experience. At 4.7in, the iPhone 6 is the minimum-size display compatible with the Noon VR. This again presents a problem – there’s no way to see whether you’ve correctly positioned it in front of the lenses without strapping on the headset.

The Noon VR does have two rotatable feet at the base of the headset to prop up your phone, which does offer a chance of it being in line. However, overall it’s all a bit of a faff, and far from the quick and easy setup process I’ve experience with mobile VR headsets such as the Homido and Google Cardboard. 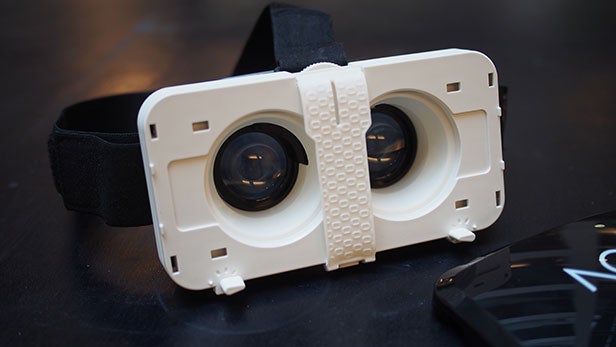 On the other side of the headset you’ll find a black headstrap, which goes around the back and over the top of your head to fit the headset securely. The over-head strap is made from a very thin fabric, while the majority around-head band is Velcro patches. It might fit securely on a wide range of head sizes, but it definitely isn’t comfortable.

This is made worse by the inadequate foam padding around the headset. It depresses to nothing, leaving your face pressed up against the hard plastic edging. I found the discomfort particularly prevalent on the bridge of my nose – the additional weight of the phone causes the headset to rest on your snout. After a short session, I found I’d been left with a delightful red mark and a sore spot.

I also had problems with the lenses misting up soon after putting on the headset. This is disappointing, especially considering that one of the Noon VR’s supposed selling points is the ventilation provided by holes at the top. Neither I, nor the headset, were extremely warm or cold, so this is simply a result of the lenses being too close to your face.

Everything about the Noon VR’s design feels rushed – and untested. It’s by far the worse mobile VR headset I’ve encountered – and I’ve seen a fair few. 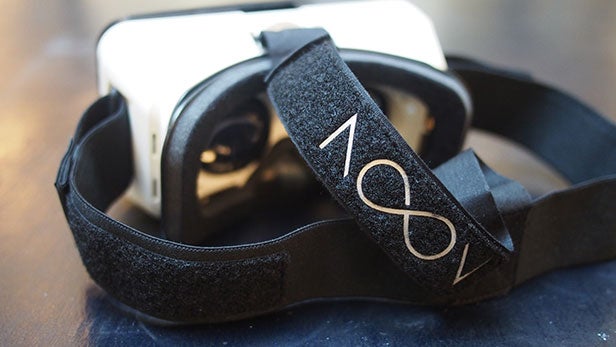 Sadly, the Noon VR’s design goes on to impair its performance, ruining the user experience entirely.

First, it can take up to a few minutes to settle your phone into an optimum position for viewing games and apps due to the insufficiency of the rubber strap. This becomes an absolute pain, as you’ll have to jiggle your phone around every time you want to change app or interact with the screen.

Like the Homido headset, the Noon VR lacks any kind of input button with which you can interact with the screen while the headset is in use. Thus, you need to constantly unhook the rubber strap to release the handset, use it then put it back in again – even to select a menu option in-app.

The Noon VR website and the accompanying app claim that you can tap the back of your device on the rubber strap to interact with the screen. However, I’ve not yet managed to make it work with any of my devices, aside from in the Noon VR app itself.

A small touch button is present on the £10 Google Cardboard – and it’s something it will seemingly always hold over its so-called premium rivals. 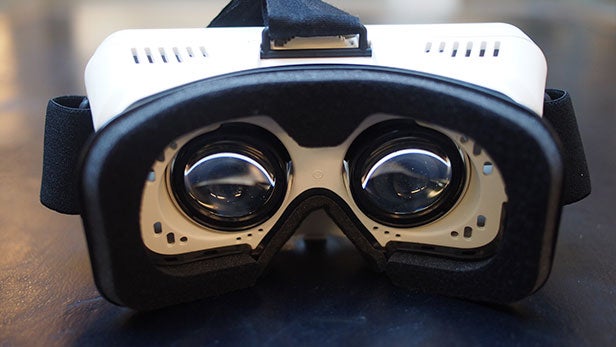 Despite my incessant jiggling, I never managed to place my phone in the Noon VR’s periphery perfectly. I nudged, I pushed, I pulled. I took out my contacts and then put them back in again. No matter what I tried, everything always felt out of focus. Although the Noon VR features a dial on the top of the headset specifically for focusing, it didn’t seem to make much difference.

In addition, light leaks in around the top edge of the phone, making it even more difficult for your eyes to adjust. Not only did I have such issues with the iPhone 6 – whose 4.7in display size is minimum for the Noon VR – but light bleeding was a problem with the slightly larger Nexus 5 too.

The combination of the slightly out-of-focus vision and light bleeding problems meant that I regularly felt nauseous after only a few minutes of using the Noon. Not since using the DK1 Oculus Rift have I felt so poorly using a VR headset – and as I mentioned earlier, I’ve been through a few. 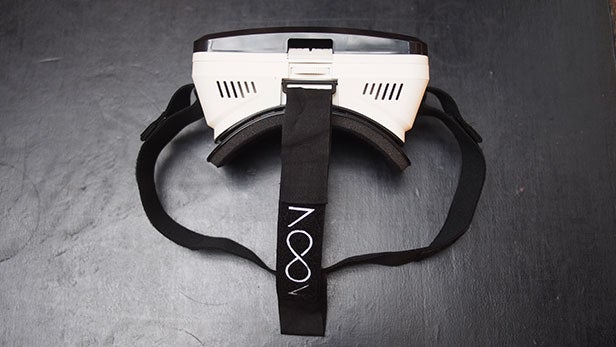 Then there’s the issue of content. All mobile VR devices live and die by the apps and games available in the App Store and Google Play. And like its rivals, the Noon VR comes with an app of it’s own. It lives within the App Store on iOS, while the Android version has to be downloaded directly from the Noon VR website.

The Noon VR app cleverly picks out all the video content on your phone and enables you to view it in virtual reality, in what I can only describe as a project simulator. It’s a good way to get a personal experience with your video content on a big screen for little effort.

Sadly, this is where the usefulness of the Noon VR app ends. There’s no suggestions as to which other VR games and apps are worth a download. Instead, you’re left to forage for them yourself.

And there don’t appear to be very many in either the App Store, or on Google Play that are worth multiple plays. There are certainly a greater number on Google Play, but they’re limited to mobile games or interactive trailer experiences. These are great for giving you a taste of VR, but they won’t be anything you’ll go back to time and again. 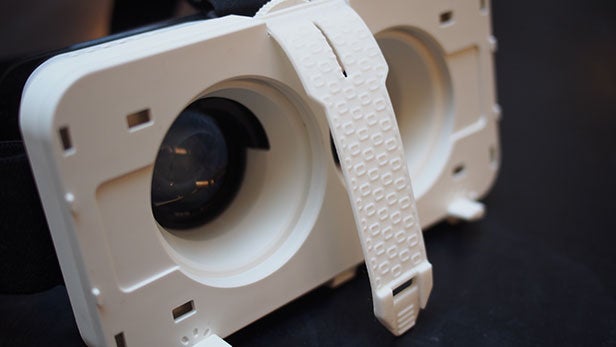 Should I buy the Noon VR headset?


The short and sweet answer is: no. If you have to buy a mobile VR device, I’d recommend the £10 Google Cardboard. It’s fun, inexpensive and will keep you busy for a week or so. Then you won’t feel so bad leaving it to gather dust at the back of a cupboard.

If you’re looking for a unit with a more premium feel, then opt for the Homido. However, note that – like the Noon VR – it doesn’t have as much functionality as Google Cardboard.

The Noon VR is a sloppy attempt at mobile VR. Bad design, dodgy phone compatibility and its general nausea-inducing status means it falls way short of a recommendation.