HMD Global’s Nokia line has lots of competition at this price and the X20 struggles to stand out, even though it’s good to see 5G here. Still, if you want clean Android with the promise of multiple years of updates it could be a good pick.

The Nokia X20 sits at the top of HMD Global’s new line of budget phones, offering 5G for a very affordable price.

The lure of 5G aside, the Nokia X20 lacks some of the higher-end specs and features that are starting to become commonplace on phones from the likes of Xiaomi and Realme.

Instead of offering flagship performance or a cutting-edge screen, the Nokia X20 is trying to offer longevity by guaranteeing customers three years of Android system updates – something rarely seen on anything but a flagship or Pixel phone.

Is that enough to make this one of the best Android phones at its price? Let’s have an initial look and see.

In the UK you’ll be able to get the Nokia X20 for £299, while in other European countries it’ll retail for €349. There is currently no US price or availability.

Nokia X20 specs and features – 5G is getting cheaper

The Nokia X20 is the high-end model in HMD Global’s new line, however it is still aiming to earn a place as one of 2021 best cheap phones.

The budget phone category has exploded recently, with devices like the Poco F3, Moto G30 and Xiaomi Redmi Note 10 Pro all impressing us during testing. I was also very impressed by the near flagship skills of the Samsung Galaxy A52 5G, which is £100 more than the X20 at £399. 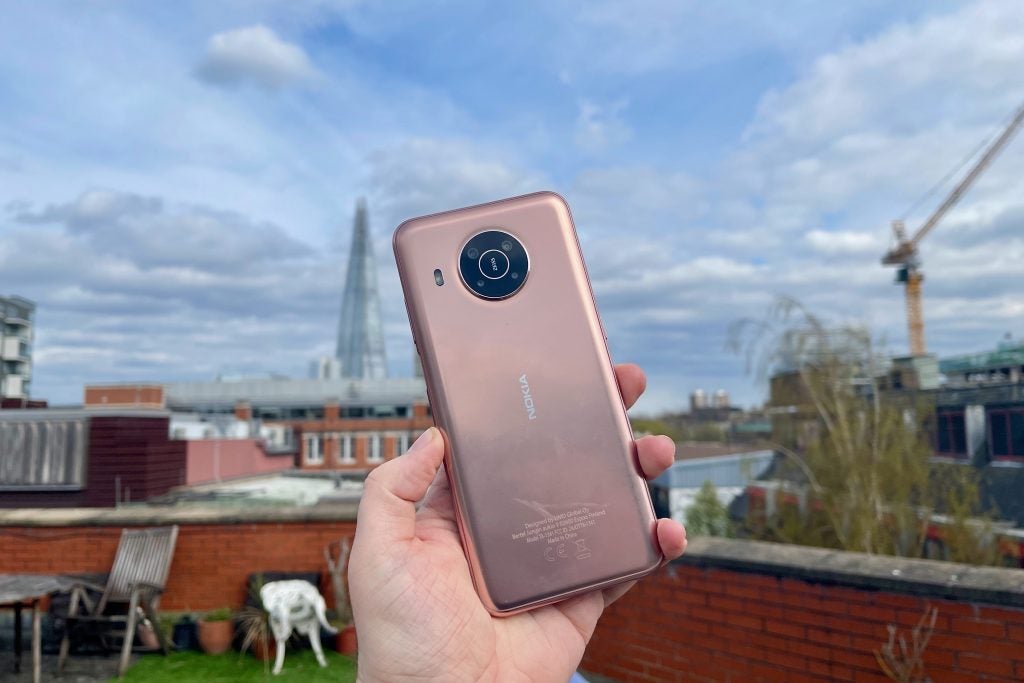 During my opening play with the phone I found the Nokia X20 feels a bit meagre compared to these affordable heavyweights. Some cheaper phones are utilising 8-series Qualcomm chipsets, so the Snapdragon 480 here feels modest at best. It is perfectly fine for basic tasks, but don’t expect it to run high-end games too well.

What that chip does enable is 5G support, something that’s still not always found at this price.

The screen also falls a bit short of what many would now expect even, in the affordable end of the market. The 1080p 6.67-inch LCD is perfectly nice, being bright, sharp and colourful, during my opening play with the phone. But it lacks the smooth 90Hz or 120Hz refresh rate seen on much of the competition.

I was impressed with the phone’s software during my opening tests, however. You get the promise of three years of software and security updates, meaning you’ll continue to get new versions of Android for far longer than usual. Many of the other cheap phones on the market, like the Moto G10, will never get another numbered version of Android during their lifespan.

This is Android One too, so it’s very much a ‘stock’ version of Android. There’s little bloatware, aside from Netflix, and the UI is so much better as a result. The UI feels clean and tidy and is not bogged down by features you’ll never use.

Like Apple and Samsung, HMD has removed the charger from the box with the X20. That means you’ll have to provide your own USB plug to juice it back up. In terms of battery, there’s a 4470mAh cell inside that can be fast charged up at 18w – as long as you have a capable charger. There’s no wireless charging. 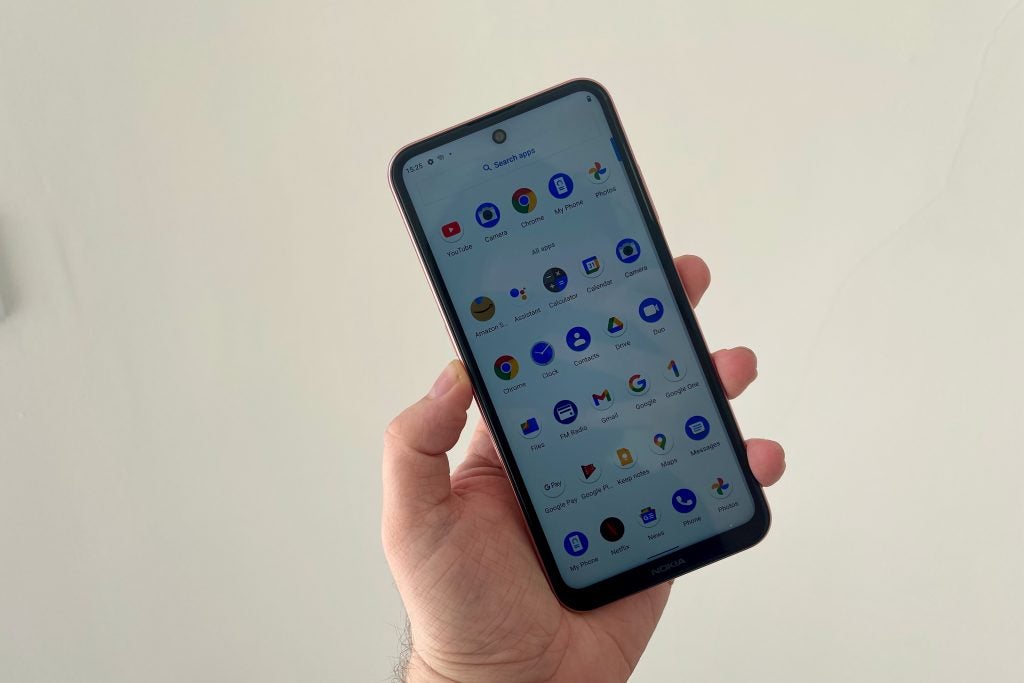 The camera system here feels like it follows the standard blueprint used by many phones this price-range. There’s a main 64MP that, from my initial testing, takes clean and sharp photos. It’s paired with secondary sensors that feel like little more than spec-sheet dressing. There’s a 2MP macro, 2MP depth and 5MP ultra wide – none of these seem standout and it would be better to just see a focus on a main and an ultra wide. At 2MP, a macro shot is never going to look good.

HMD might be mixing up the naming convention for Nokia phones, but the general look is very much the same. The X20 is a big slab of a phone, with sturdy plastic on the back and some tasteful colour options on offer. The camera array is housed in a neat circle on the back and there’s a 3.5mm headphone jack included, plus a useful fingerprint sensor embedded inside the power key.

I have found this fingerprint sensor a little temperamental, but then again this is a pre-production unit so that may change when I test a proper consumer release sample.

A 6.67-inch phone is never going to be small and the X20 feels bulky to hold. It’s taller than an iPhone 12 Pro Max too, and you’ll need large pockets to keep it in. A lot of this size is a side-effect of the fairly chunky bezel around the screen. I’d also like it to not have a big Nokia logo on the front – it looks ugly and unnecessary. 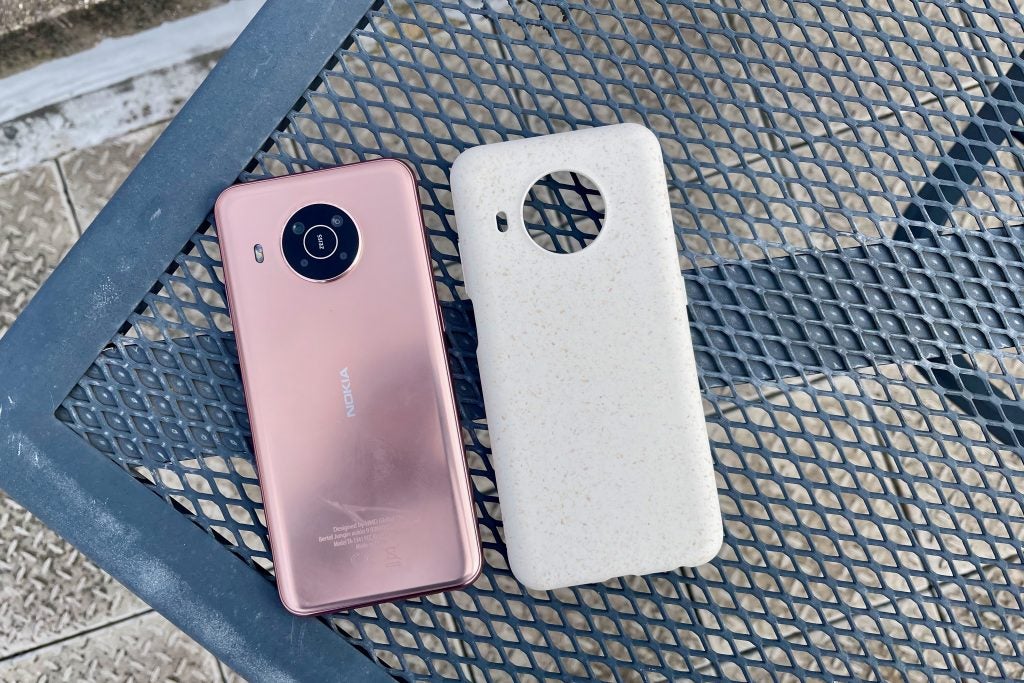 While there’s no charger in the box (at least in the UK), you do get a nice 100% compostable case included.

HMD Global’s Nokia line has lots of competition at this price and the X20 struggles to stand out, even though it’s good to see 5G here. Still, if you want clean Android with the promise of multiple years of updates it could be a good pick.