The N85 has been hotly anticipated as many have been hoping that it can repair some of the damage that the rather lacklustre N96 inflicted on the N series brand. Has it succeeded? In the most part, the answer is thankfully yes.


Like a young Bruce Forsyth this phone aims to be an all round entertainer offering up serious music and video playback features plus 3D gaming and onboard GPS. But although it’s bursting at the seams with features it forgoes the chunky dimensions of the N96 and instead has a much slimmer and sleeker frame.


One thing it does share with its larger sibling is the two-way, sliding keypad mechanism. When you push the front of the phone upwards a traditional numerical keypad is revealed, but push it downwards and you’re presented with four multifunction buttons. In media mode these light up as playback controls, in game mode they act as extra control buttons and in the web browser they’re used to zoom in and out of pages.

The slider is also used to change between landscape mode (when the normal keypad is showing) and portrait mode (when the media controls are on display) as the phone lacks an accelerometer. One minor irritation with the design is that it lacks the mini kick stand found on the N96, so resting it on a table to watch a video is not as straightforward.

The N85 is the first N series handset to use an Organic LED screen. The big advantage of OLED displays is that they consume less power than traditional TFT screens, mainly because they don’t need a backlight. However, the OLED screens we’ve seen in the past on mobile devices haven’t impressed us all that much. The screen on the N85 is thankfully a step-up from those older OLED displays, but it still takes a bit of getting used to as it has a very different look to a normal TFT.


For the most part colours look bright and vivid, but there are times when the screen can seem a bit overly murky and text and icons don’t look quite as sharp and stable as they do on a TFT. It can also be very difficult to read outdoors in direct sunlight – a problem that pretty much affects all OLED screens. Don’t get us wrong, the display is not all that bad and we could be accused of being overly critical, but we’d still recommend you to check out the phone’s screen in a store to form your own judgement before making a purchase.

Luckily there’s very little else to criticise on the N85. When it comes to music the handset is packed full of top-notch features. It has the standard, easy to use S60 music player and there’s plenty of space for storing tracks on the supplied 8GB microSD card. The phone has a standard headphone jack so you can swap the supplied cans for your own ones if you like. However, the bundled headphones are actually pretty good and they have an inline remote control plus a mic for hands-free calling. One of the handset’s coolest features, however, is its built-in FM transmitter which you can use to beam tracks to your car stereo or FM radio at home. A2DP is also supported for wireless stereo headsets and there’s an onboard FM tuner so you can tune to XFM when you’re bored of your own tunes. 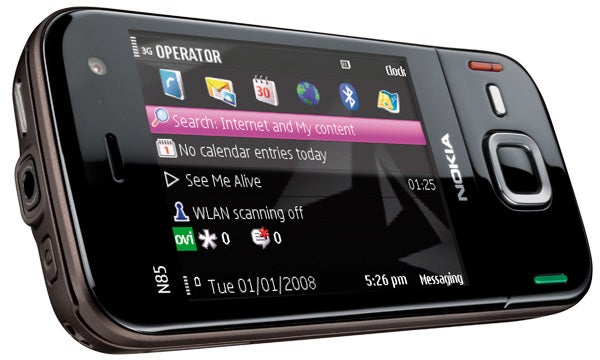 The N85 also excels at gaming. NGage maybe dead as a hardware platform, but it lives on in software and you’ll find the NGage application tucked away in the N85’s main menu. A number of demos are preloaded on the phone including FiFa 08 and System Rush (a Wipeout clone). The 3D graphics shift at a decent frame rate and while the demos are not quite on the same level as titles for the DS or PSP when it comes to gameplay, they’ll certainly keep you entertained on long journeys.

Naturally the N85 supports both Wi-Fi and HSDPA and although the Nokia browser on the N85 isn’t all that great, pages do at least load and display quite quickly. Plus you can always download Opera Mobile for the phone, which provides a much better browsing experience in our opinion. The onboard GPS also worked well with the included Nokia maps software and was not only reasonably quick to lock on to satellites, but also did a good job of holding on to a signal even in central London surround by lots of tall buildings.

Nokia has included dual cameras so you can use the phone for 3G video calling (does anyone actually make video calls?), but naturally it’s the 5-megapixel one mounted on the rear that’s of most interest. The sensor is hidden behind a lens cover and when you slide this back the phone automatically switches into camera mode. The camera uses Carl Zeiss optics and has both autofocus and a dual LED flash. Pictures aren’t quite at the level of a dedicated digital camera, but the Carl Zeiss optics help deliver more clarity and detail than the run-of-the-mill snappers found on most camera phones.

N series phones aren’t exactly known for their marathon battery life – it was one of the biggest issues on the old N95 – but the N85 bucks the trend, no doubt in part because of the power saving features of the OLED screen. With medium usage for phone calls, web browsing, music playing and a spot of gaming we got two and a half days out of it which isn’t bad.


We’re not totally convinced by the N85’s screen, but in most other respects this is Nokia’s best handset for quite some time. It’s small and pocket-friendly, has an excellent line-up of features and is fairly easy to use. In many ways it’s the phone that the N96 should have been.