I kind of understood when way back in 2005 Nokia launched the 770. Then early last year I came out broadly in favour of the N800, though with some reservations.


Both were earlier versions of the N810, a mobile device designed with communications, entertainment and information storage in mind. The N810 mirrors that aim and adds new features. It is nicely designed as far as the hardware goes, and it offers a reasonable range of software capability. 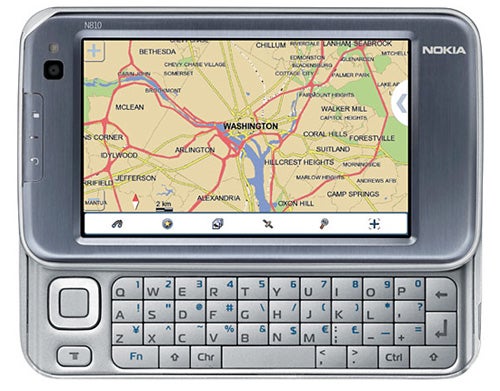 But in today’s world, I think the N810 misses a crucial element. It is a device from Nokia without a SIM card slot. With UMPCs and notebooks starting to sport SIM connectivity, and more smartphones around than you can shake a stick at, who’s going to pay £330 for a pocket-sized device that needs a wireless network nearby or a Bluetooth enabled mobile phone to get onto the Internet, especially when they’ll still need a SIM-toting device of some kind for bog standard network based voice calls?


Nokia clearly thinks my concerns are misplaced, and I have to say that for all the negativity above there is a lot to like about the N810. I’m just not sure if there’s enough to justify a purchase.


Essentially it’s a Linux-based device with an army of built-in software for all manner of activities, a QWERTY keyboard, the aforementioned Wi-Fi and Bluetooth, and GPS. Stereo speakers sit on either side of the wide format screen. 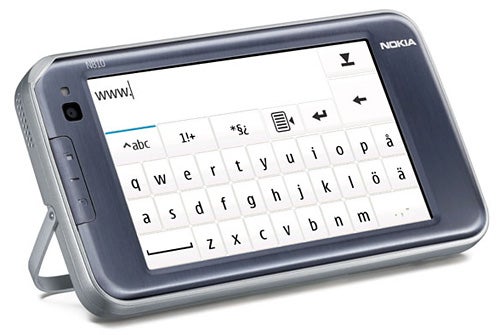 The keyboard is nicely hidden away when not needed, sliding out from the side of the device when required. The keys themselves are a bit bigger than those you’ll find on many handhelds with sliding keyboards, simply because the N810 is a bit larger than your average handheld at 128mm wide, 72mm tall and 14mm thick. It’s pretty heavy too at 226g. Put it into the provided sleeve and you’re going to be well aware you are carrying it around.


When you don’t want to use the keyboard the 800 x 480 pixel, 4.13-inch screen is touch-sensitive. Fingertips do for prodding the screen most of the time, but occasionally you need to resort to the stylus; a sadly lightweight piece of plastic which doesn’t quite belong with the metal-looks of the N810 itself. Handwriting recognition is included and there’s a tappable QWERTY keyboard for the touchscreen too, so you really are spoilt for choice when it comes to data entry.

There is a design issue concerning the slide-out keyboard. A flip-out stand lets you prop-up the N810 Internet Tablet on a table at a neat angle for viewing the screen. But do this and then try to hit the keyboard with a fingertip and you just end up pushing the device away from you. There’s just not enough grip or weight to hold it in place as you tap.


Web browsing is one of the most satisfactory activities you can undertake with the N810. A button on the top edge of the device will pull the browser into full screen so you can make the most of the available space; even complex pages like the TR home page loaded quickly over Wi-Fi and were easy to get around. You can subscribe to RSS feeds, open multiple web pages at once, and take advantage of video and audio streaming. Yes, I did look at some YouTube vids and they streamed nicely. 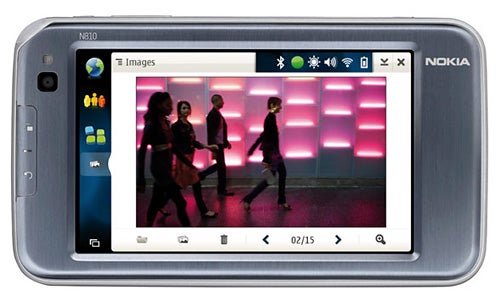 Another potential use of the N810 Internet Tablet is VoIP. There is a version of Skype on board as well as one from Gizmo Project for this purpose. A VGA camera nestles to the left of the screen for video calling. Now, I rather liked the pop-out swivel camera in the N800. It was both cooler looking and more flexible than the fixed position camera used here. Still, the camera works, and the abovementioned applications also cater for IM. There is an email client for POP3 accounts too. 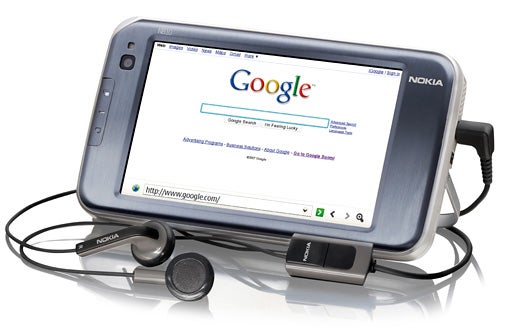 Programs-wise, there is a PDF reader, note taker, calendar, calculator, drawing application and four games including chess for those cerebral moments, and a Tetris clone for the brainless ones.


And as for the GPS antenna, maps of UK and Ireland are included and as well as tracking your route the maps include POIs. But if you want to use the N810 Internet Tablet for point-to-point sat-nav you’ll have to fork out for the Wayfinder software, but at least Nokia provides a vehicle mount.

It is entirely possible to have lots of applications opened at once and switch between them. You can use a hardware button to open the application switcher or tap its on-screen icon if that is visible, then switch to a new app or close any you don’t need any more. Apps can be slow to load first time round, but thereafter they switch quickly. Importantly, there is a lock button which disables the touch screen and hardware buttons.


There is 2MB of built-in storage and an SD card slot for adding more, and the N810 Internet Tablet supports SDHC. You can connect it to your PC using the supplied cable, but sadly Nokia has made its connector microUSB rather than miniUSB so the chances are that the generic cable you already carry around will be no good for this job. 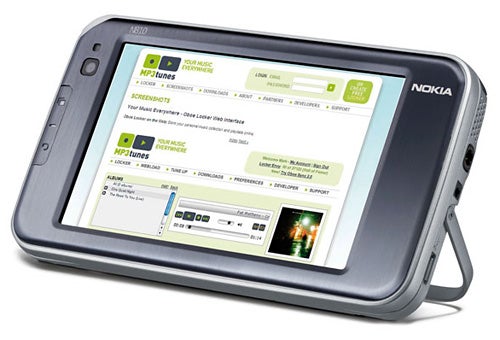 The Linux-based software is generally quite impressive. It looks neat and for the most part runs smoothly. There is a fairly active developer community, and the 122 downloads that were listed as I wrote this review includes games, multimedia, Internet apps and more. However, don’t expect as many add-ons in comparison to other handhelds formats such as S60 smartphones or Windows Mobile.


In the end the N810 is a really frustrating device. I rather liked using it, and if somebody presented me with one I’d say ‘thanks’, and keep it in the front room for a bit of entertainment while watching telly. But with a relatively small add-on software base and no SIM I just don’t see the N810 carving out much of a niche for itself. Which is a pity.