Nokia has been making a big push with smartphone camera technology since introducing its ‘PureView’ camera technology. It first turned up in the Symbian-running Nokia 808 before making its way into smartphones like the Lumia 1020, and as a flagship phone it’s no surprise that it’s included in the Lumia 930.

On paper the Lumia 930 matches the Lumia 1520’s camera. It has the same 20-megapixel resolution, half that of the 41-megapixel Lumia 1020, an f/2.4 aperture lens, 1/2.5-inch image sensor and a dual LED flash. While the Lumia 925 had a wider maximum aperture (f/2.0), the 930’s sensor is larger and the 925 only shot at 8.7-megapixels. This should help when taking advantage of PureView’s detail enhancing trickery.

Like the LG G3, there’s also optical image stabilization to reduce blur and keep things steady, unlike the S5 which relies on digital image stabilization and is not as effective at ironing out those shaky moments. There’s no HDR mode, though, which is a serious omission given how useful a feature it can be.

Optical stabilization is also in tow for the 1080p Full HD video
recording, while up front is a 1.2-megapixel camera capable of shooting a
maximum 720p HD, which is more than suitable for Skype video calls. 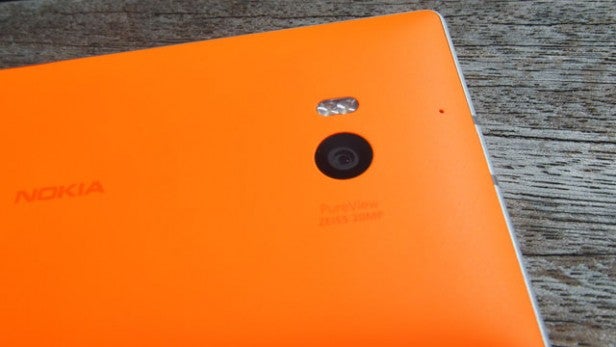 Camera App
Unlike the Lumia 1020, there’s just one camera app you need to worry about for taking pictures. It’s relatively straightforward to use until you want to delve into the generous manual settings.

In the top left hand corner is the camera roll and over on the right are three circular icons letting you switch between camera, video recording and the smart mode, which unlike the 1020 is now built into the main camera app. Here is where you can shoot in burst mode to shoot 10 frames in quick succession and adjust those images with blur effects, for instance, although you’ll usually see in a drop in image quality in this mode. 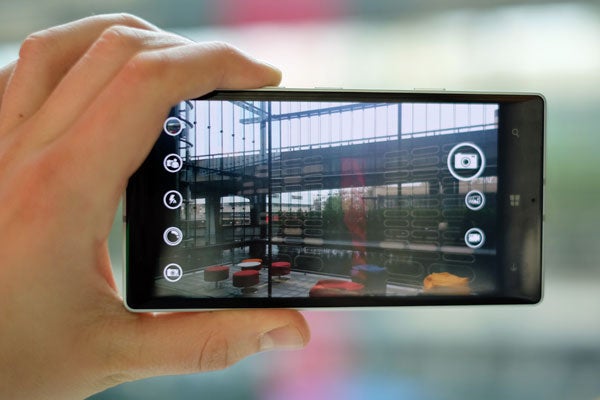 You are going to shoot most of your photos with the main camera mode and you have the option to press the screen or the dedicated camera button to take a shot. Above the main camera options are settings to apply a timer, add framing grids, capture high and low resolution copies of the image and turn on the Living Images feature. This essentially gives photos in your camera roll a HTC Zoe-style effect that’s not all that useful.

There’s also some nice tutorials to explain some of the key camera features and show the impact adjusting elements like shutter speed or the refocus on images.

Image Quality & Performance
If you don’t want to tinker around too much, it’s still possible to take good quality photos, though getting those great shots doesn’t always happen on the first go. The 20-megapixel camera actually takes two images, a 5-megapixel and 16-megapixel image, giving you something that’s Facebook or Twitter-friendly and the other that should give you more detailed images you can access when you are connected to PC.

The problem with this is that, like the Lumia 1020, the extra processing time means the camera is a little sluggish. It means you can one moment shoot fantastic shots and others produce blurry or over exposed images at times — the kind of experience we’d sooner avoid on an expensive flagship smartphone. 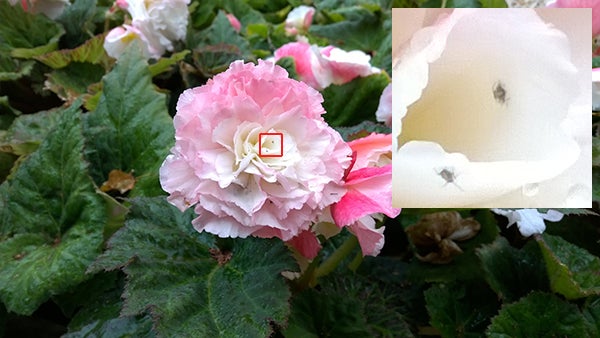 The camera really excels for close-ups and portrait shots, delivering sharp, detailed images. It even produces a slight bokeh (blurred background) effect in this shot. The colours are very accurate, too. 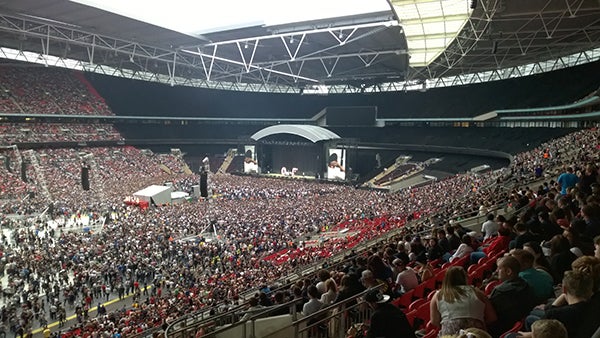 But scenic shots from a distance are more of a challenge. As the
image below shot in automatic mode shows, colours aren’t all that punchy
and the lack of an HDR mode really shows here. The sky above the
stadium is totally overexposed — a decent HDR mode would really help
here. 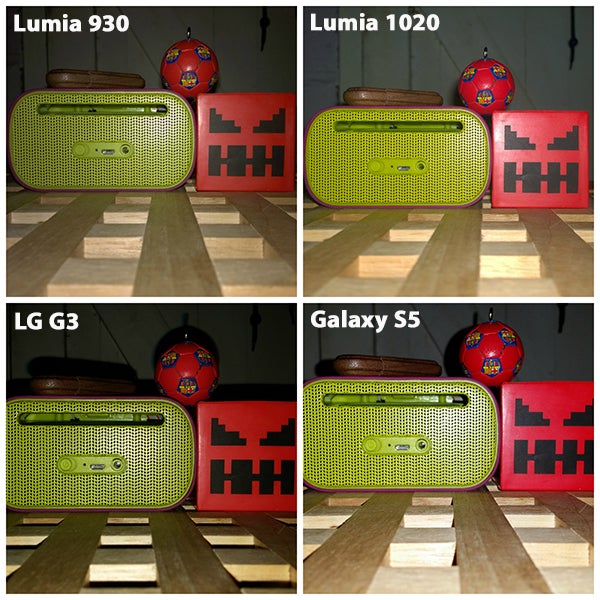 Low-light performance is what the majority of the Lumia 930’s camera
tech is geared towards, but it’s a mixed bag of results. In controlled
close-up environments, as the image and comparison with other leading
smartphones above shows, it maintains great detail. It’s not as bright and accurate as the 1020, but it’s much better than the LG G3 and very similar to the Galaxy S5.

But the moment there’s motion in the scene it really struggles, which is frustrating if you’re trying to take a photo when on a night out. This is the kind of area where the HTC One M8 excels.

As for video, we shot footage in well lit conditions and optical stabilization takes some time to adjust. Reviewing the footage on a computer doesn’t deliver fantastically sharp Full HD footage, either. What does impress is the sound pick up. Nokia includes four directional microphones that really give you sense of where the noises and voices are picked up from in the scene. 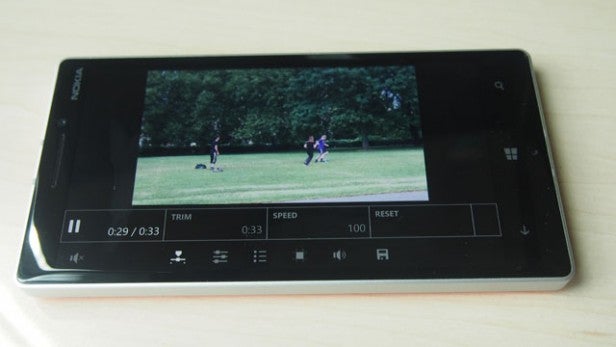 We also played around with the new VideoTuner app Microsoft recently introduced to edit footage and basically have a bit more fun with your footage. You can trim footage, slow down the video and add music. Most of the adjusting involves swiping up and down on a bar and changes can be reset. Once you are done, you can save in small, medium, large video formats. Additionally, you can save in a Vine and Instagram-friendly format, though you still have to go into those apps to upload it.