One of the most important features of the Nokia Lumia 925 is its camera, based on the technology used in the Lumia 920. It has been slapped with the PureView branding, introduced with the Nokia 808 PureView back in 2012.

PureView doesn’t relate to a specific type of camera technology, but rather of being ‘cutting edge’ in the field.

The Nokia Lumia 925 has an 8.7-megapixel main sensor, which is well below the 13-megapixel sensors of phones like the Samsung Galaxy S4. But pure sensor resolution is only one part of the camera equation. 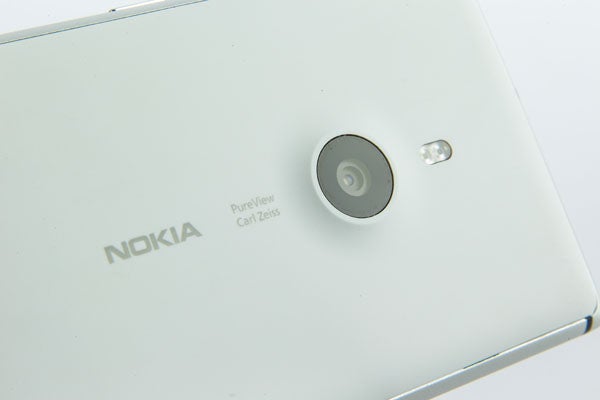 Other important factors include sensor size, lens aperture, lens construction and image stabilisation. As the camera is so important here, we’ll look at the lot.

Its lens, too, is good rather than stunning. It’s an f/2.0 lens with 26mm focal length and a six-part construction. This is one stride better than the Samsung Galaxy S4, which has an F/2.2 lens. Wider aperture lets the Lumia 925’s lens take in that bit more light within the same exposure window.

What sets the Nokia Lumia 925 apart more significantly is its use of optical image stabilisation (OIS), rather than the ‘software’ stabilisation used in other top-end phones.

OIS uses the phone’s gyroscope to detect when the phone is moved. A lens element then moves in the opposite direction, eliminating the ‘camera shake’ effect. Nokia claims its system can move up to 500 times a second.

This allows the Nokia Lumia 925 to indulge in slightly longer exposures than the average phone, letting the phone once again take in more light for each shot. Nokia claims the average phone can’t go beyond a 1/30 second shutter speed before killing image sharpness, which is raised to 1/4 a second with OIS. Again, according to Nokia. This should result in far better low-light performance than the average phone.

Let’s see how the Lumia 925 actually fares out in the field.

For an 8-megapixel phone camera, basic detail retrieval during daytime is impressive. A shot of the London skyline shows that the Lumia 925 produces shots with significantly less noise than an iPhone 5. 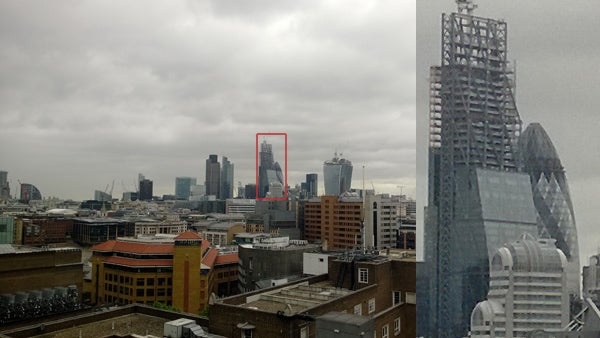 The Samsung Galaxy S4 captures that bit more detail in these conditions thanks to its higher-resolution sensor. But note how well the Lumia 925 has dealt with bringing out the tricky shadow detail in-between the scaffolding atop the Gherkin building. 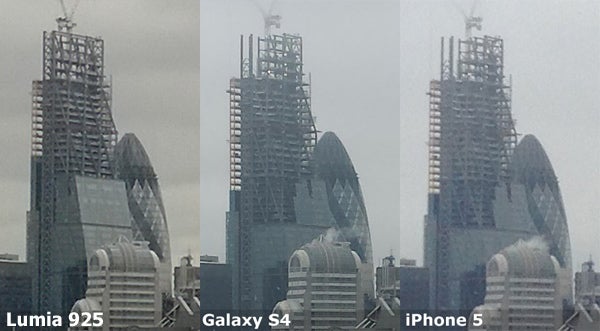 Choosing a close-up subject, the Lumia 925 performs well too. Nokia claims the phone can focus on objects just 8cm away. In practice, we found that it needed a little more in most lighting conditions, with shots otherwise ending up completely out of focus – the autofocus giving up just before the shutter fires.

Macro detail is respectable, and focusing time is impressively quick. This isn’t a superstar macro performer, though, with fine details looking a little soft compared to the best out there. 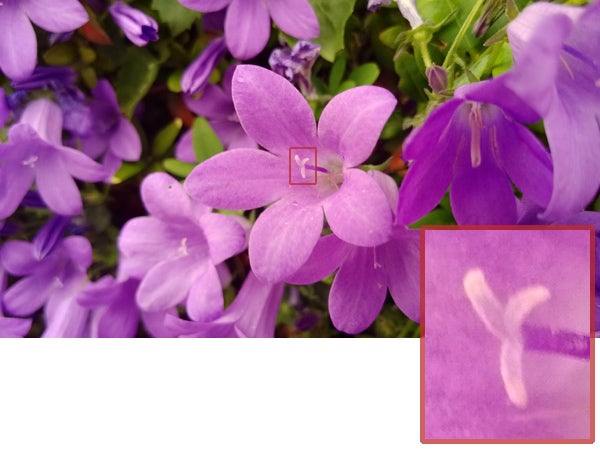 Althoug the shot is in focus, the stamen remains a little soft. 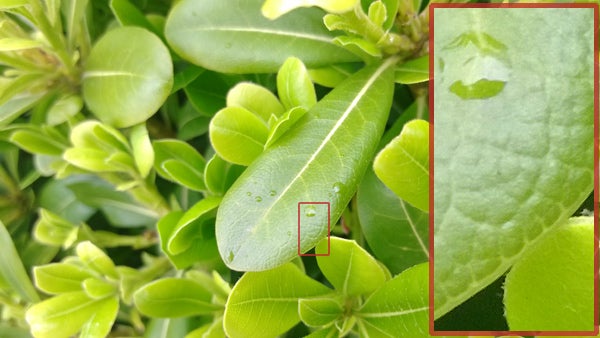 Where the Nokia Lumia 925 camera really separates itself is low-light performance. This is where the OIS feature kicks in.

Low-light shots are far less noisy and far more detailed than almost any other top-end phone of the moment. The one clear rival is the HTC One, which uses larger sensor pixels rather than hardware image stabilisation to achieve better-than-average low-light performance. As we found in our Lumia vs HTC One comparison, though, the HTC One tends to produce glummer colours than those seen here. 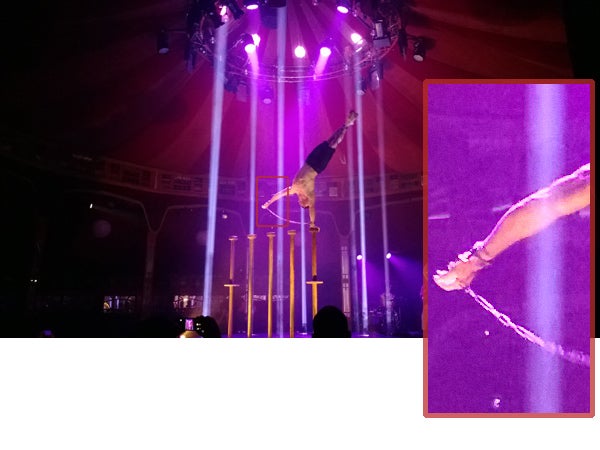 Limbo at the London Udderbelly 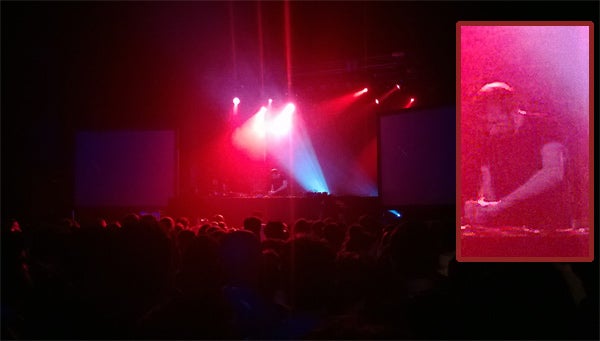 The close-ups here may look a little noisy, but these shots were – naturally – taken without any flash assistance, and performance with a non-OIS would be far worse.

In particular, the Lumia 925’s vivid rendering of colour is particularly impressive. It’s rich and reasonably accurate, where a non-OIS’s shades would devolve into a mush of nearby shades that would look thoroughly unconvincing up-close. 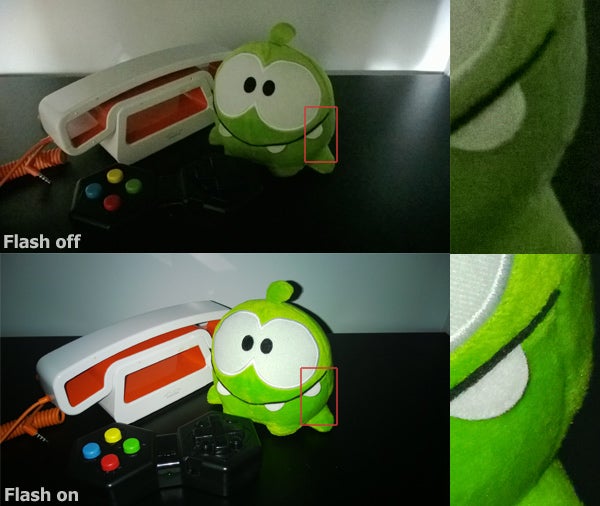 The Lumia 925 has a dual-LED flash rated for use with objects up to 3m away. Its spread isn’t as even as a Xenon flash like the 808 PureView’s, but it’s more powerful than average and comes in extremely handy when used as an AF assist in dark conditions – not just as a flash.

The non-flash shot above shows the Lumia 925’s OIS feature working in overdrive – although the room was almost completely dark, it doesn’t look hugely darker than the flash picture. With a lesser phone camera, the edges of objects would be far less clear, and the scene a lot darker.

A lack of fine detail in the pixel crop of this shot shows you quite how far removed this is from a ‘proper’ compact system camera or DSLR, though – there’s much more in the flash-enabled shot.

Nokia’s Lumia 925’s PureView camera is not a magic revelation – optical image stabilisation is common outside of the phones – but it does make the phone camera far more versatile in dusk and night conditions. And it means you won’t have to turn the flash on anywhere near as often.

The phone also has a good-quality user-facing camera with a 1.3-megapixel sensor and f/2.4 lens.