The last in the series of Christopher Nolan’s Batman movies – the Dark Knight Rises – released in cinemas on July 20 and as a tie in with the movie Nokia has produced a limited edition version of the Lumia 900 called, unsurprisingly, the Dark Knight Rises Special Edition. The handset is currently available exclusively from Phones4u for free on a £26 a month contract. 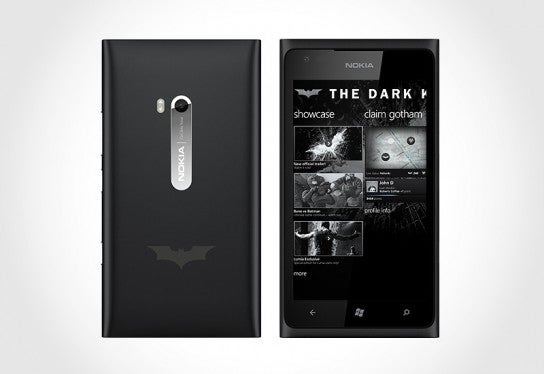 First things first, what’s the different between this Batphone version and the standard Lumia 900? Basically, what you get here is the Batman logo laser etched into the rear of the phone, an exclusive Dark Knight theme for the phone, and the Dark Knight app. The latter includes trailers, info on the movie and a rewards based game that’s based around Foursquare check-ins. Other than that, the phone is pretty much identical to the normal Lumia 900.

If you’ve seen the Lumia 800, the Lumia 900’s design won’t come as much of surprise, as it essentially takes it’s smaller sibling’s styling and supersizes it in order to fit in a larger 4.3inch screen. The phone’s body is essentially a single piece of polycarbonate with Gorilla glass covering the screen on the front. There’s also a chrome badge on the rear that has the Nokia logo stamped on it and which also surrounds the camera lens and LED flash. 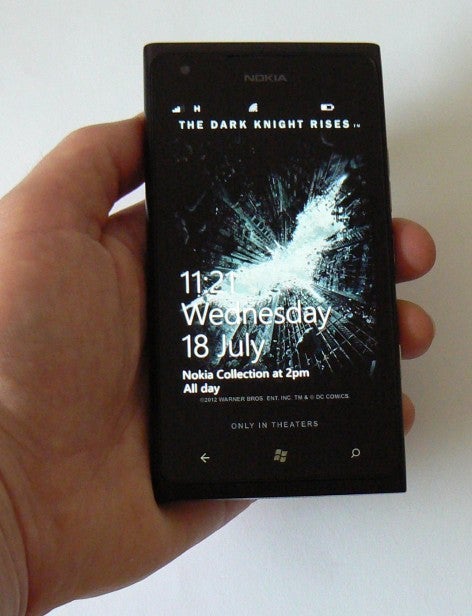 The round edges of the phone also make it more comfortable to hold than its more angular rivals, including the iPhone 4S. Overall, it’s a very elegant design, and feels robust in a way that many Android phones don’t. It’s is relatively wide though, due to the larger screen, so if you have more petite hands you might find it slightly awkward to hold single-handed.

Also, there are a couple of other niggles. The microUSB port is slightly awkwardly sited at the top of the phone and the power button is on the right hand side, which is different to most other smartphones on the market.

Nevertheless, like all Windows Phones this one has a dedicated camera button – something that’s sadly fast disappearing from other smartphones – and we love the way you can just hold down the camera button to quickly launch the camera even if you’re in a different app or the phone is in standby. Naturally there’s also a standard headphone jack at the top as well as volume up and down buttons on the right hand side.

As with all Windows Phone models there are also three touch button across the bottom f the screen with the Window button (essentially a home button) in the middle, the back button on the left and the search button on the right. These are nice and responsive to use and light up when the screen is on.

Speaking of the screen, it uses AMOLED technology rather than the more usual LCD display’s that most smartphones rely on. The advantage of this is that it really is searingly bright when used indoors, but unlike some of the other OLED screens we’ve seen brightness levels thankfully don’t drop off too much once you’re outside. The increase in the size of the display over the screen on the Lumia 800 does give photos and videos more impact. However, it’s still stuck at the regular 480 x 800 pixels, so essentially it’s just enlarging what you get on all other current Windows Phone handsets. 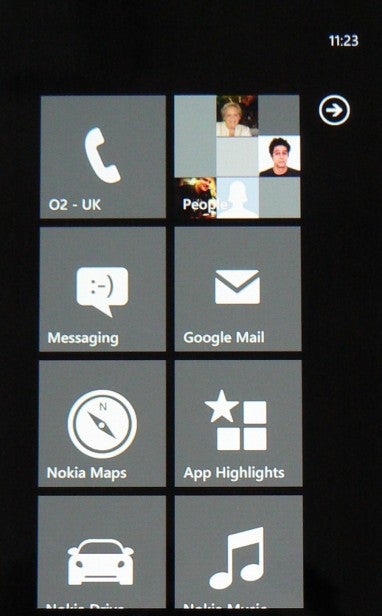 Thankfully Nokia has moved away from the Pentile subpixel arrangement of the screen on the 800, which caused some graininess, especially when rendering smaller text. The Nokia Lumia 900’s screen uses regular RGB subpixels instead and so text and graphics actually look a fair bit sharper. However, it’s no match for the high resolution screens on the iPhone 4S or Galaxy S3. Also, the colours can look a bit overly saturated and there’s a blue-ish tinge on whites – something that’s very noticeable when you’re viewing webpages as most of them have white backgrounds.

The Nokia Lumia 900 Dark Knight Rises Special Edition isn’t exactly a beast when it comes to specs either. It relies on a relatively modest single core Snapdragon processor that runs a 1.4Ghz and is twinned with 512MB of RAM. There’s also 16GB of storage space for apps, photos, videos and the like. As with the iPhone, this storage space is fixed because the phone doesn’t have a microSD card slot. OK, so 16GB is probably enough for most people, but it’s still annoying that you haven’t got the flexibility to expand it using cheap memory cards in the way that you can on most Android phones.

In the Benchmark Free application the Nokia Lumia 900 racked up a score of 39.5 (higher is better) , compared to 37.9 for the HTC Radar and 35.6 for the older HTC Mozart. However, the lack of horsepower is sometimes noticeable in the web browser, as it sometimes seems to get itself stuck when loading and rendering webpages, especially ones with lots of pictures or graphics. This is reflected in its browser benchmarks, which are fairly lowly compared to the iPhone 4S and high-end Android handsets like the S3. In the Sunspider test it posted an overall score of 6795.9ms, while in Browsermark it managed to rack up of result of 32, 173. The iPhone 4S by comparison, when running iOS5, scores around 51,300 in Browsermark (higher is better) and 2200ms in Sunspider (lower is better). 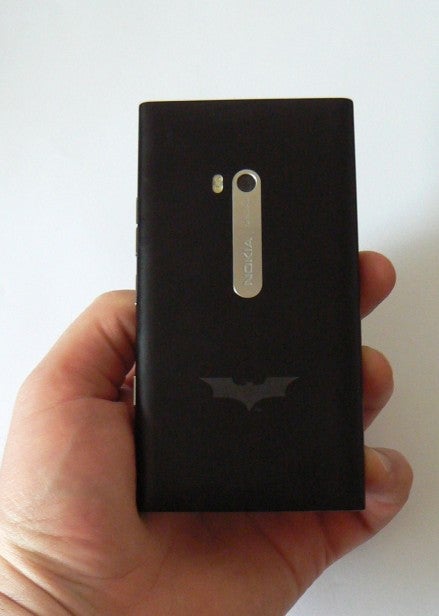 Microsoft doesn’t allow much room for manufacturers to alter the look of Windows Phone, so the OS experience here is really little not much different from other Windows Phone 7 handsets. This is no bad thing, as Windows Phone has one of the best UIs in the business. It brilliantly integrates social networking services, including Facebook, Twitter and Linkedin within the People Hub, while the Live Tiles and neat 3D-style page flips give the whole OS a very modern and dynamic feel.

What Nokia has done is add a few of its own apps and services to the phone. You get both Nokia’s Drive GPS navigation software which is actually very good, as well as is Nokia Maps application, which is significantly better than the standard Bing Maps baked into the OS. The handset also comes with Nokia Music. This is essentially an online radio service. You choose a music genre and the app streams tracks to you. You can skip a certain number of tracks per hour, but if you try skipping too many it’ll disable the skipping feature for a while before enabling it again. We really quite like the Nokia Music app, especially as it is free to use. 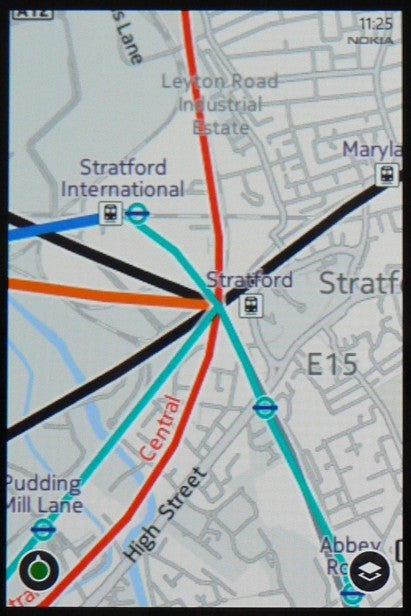 Nevertheless, there are still weaknesses in Windows Phone. There’s no graphic equaliser, bass boost settings or any kind of audio presets. The calendar also needs work, as the overall monthly view is next to useless and although range of apps available is improving, there are still significant gaps in the Marketplace.

Of course, the other elephant in the room is that the Nokia Lumia 900 Dark Knight Rises Special Edition won’t be upgradeable to Windows Phone 8. It will however get an update to add many of the Windows Phone 8 user interface enhancements including folders and resizable tiles. If you’re someone who always wants to have the latest OS then this is likely to put you off this phone, but if you think the feature set as it is will be enough for you – and it will for most people – then you may not be so worried about it, especially as developers are likely to continue to focus on Windows Phone 7.8 compatible apps until there’s a much larger installed base of Windows Phone 8 handsets.

When it comes to photographs and videos the first thing to note is that, unlike the 800, the Nokia Lumia 900 Dark Knight Rises Special Edition does have a front facing camera so you can use it for video calling in apps like Skype. The rear camera has an 8-megapixel sensor as well as an LED flash. The camera is good, but as with the 800, it’s not in the same league as the cameras on the iPhone 4S or the Galaxy S3. You can get great pictures from it, but it makes you work harder than the cameras on those phones. 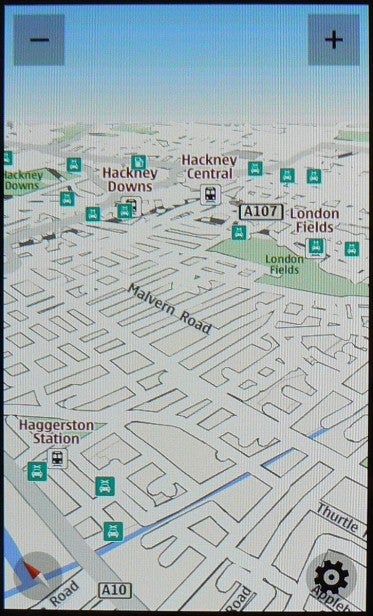 The focus is slower and it doesn’t always judge exposure correctly, so often you’ll find yourself having to take a shot again to get a better result, whereas the S3 and 4S cameras tend to get it right first time more of the time. Shots also tend to be slightly noisier, unless it’s working in optimal lighting conditions – ie outdoors in bright sunlight. On the video front it can captures clips at resolutions of up to 720p, but as with pretty much all other Windows Phones it can be slow to readjust its focus when you hop between subjects.

The call quality of the phone is up to Nokia’s usual high standards, as the ear piece delivers loud and crisp audio, while callers also said that speech from the mic as easily intelligible. However, battery life is no different to most of today’s smart phones, so you’ll need to recharge it at the end of each day.

Verdict
There’s no compelling reason to buy this Special Edition version over the standard Nokia Lumia 900, unless you feel you just can’t live without the laser etched Batman logo on the rear. However, the 900 is still a desirable phone thanks to its combination of stylish design and easy to use operating system. It’s screen could be a little bit sharper and we would have liked to see slightly nippier performance, but we think most people who end up buying the 900 will like it. That said, it does seem a tad overpriced at present, especially when directly compared against the likes of the iPhone 4S and Galaxy S3, which offer beefier performance at a similar price point. 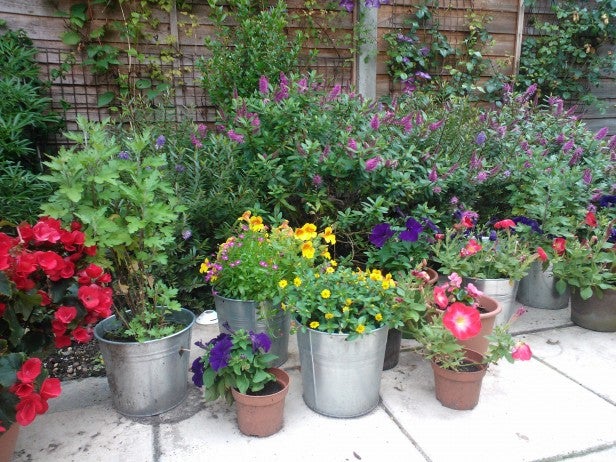 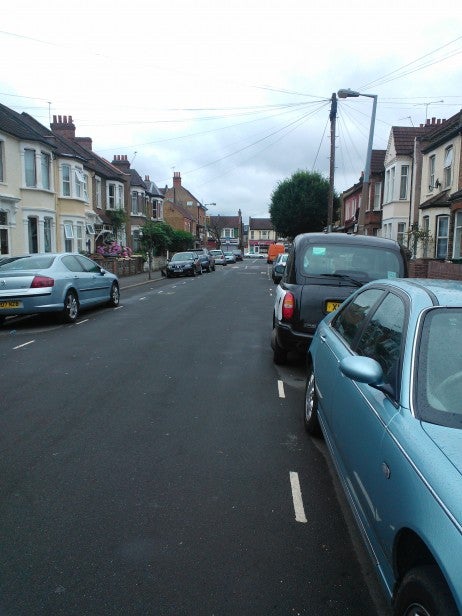 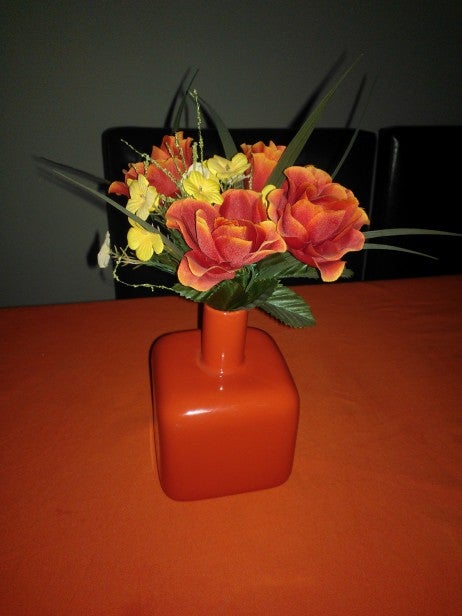