Nokia has officially unveiled the Lumia 900, the third phone in the Lumia range and the new top-end model. It is a US-only product for now, but we’d bet a bag of wine gums that a handset virtually identical to this will come to the UK before too long. But is it worth holding off buying the Lumia 800 for? We took the new Lumia for a spin to find out.

The key differences between the Nokia Lumia 900 and the Lumia 800 are that the new model has a larger 4.3in screen – instead of 3.7in – and 4G LTE connectivity. In the UK, we’re hopelessly behind our US cousins on the 4G front so there’s no chance of this model coming to our shores any time soon. For now, it’s a stateside AT&T exclusive. 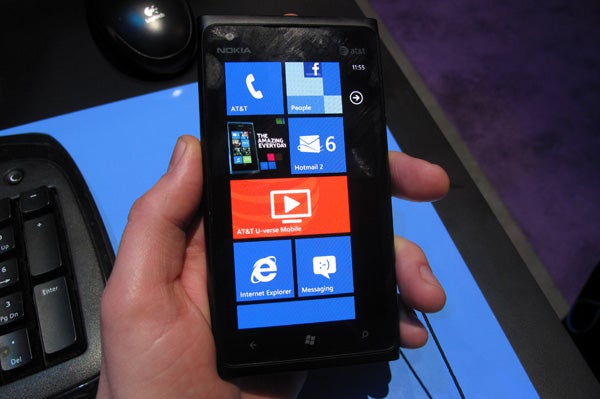 Aside from these two differences, Nokia has done all it can to keep the top-end Lumia design personality consistent. It’s all based around the polycarbonate unibody frame. It’s plastic, but is possibly the most desirable plastic-bodied phone design ever.

From first gripping the thing, there’s no mistaking the Lumia 900’s supreme build quality, and its finish is much more durable than that of most phones. The colour of the polycarbonate frame is consistent all the way through the body. Scratch its surface and you won’t see a white layer of plastic underneath a painted outer layer. Treat it mean and it’ll retain its colour. 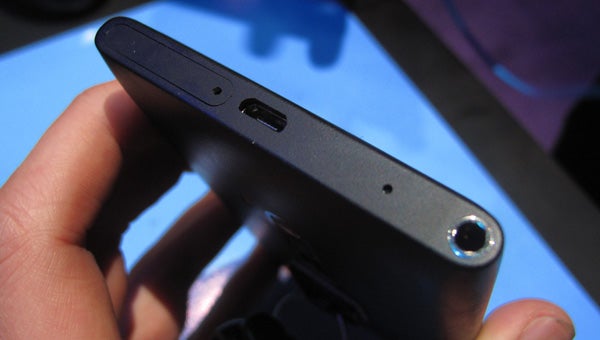 The other defining characteristic of the Lumia 900 design is its simplicity. The sides are seam-free and the handset bears just two sockets – one for a set of headphones and a microUSB for charging and data transfer. This purity, along with the slim bezel and reasonably thin-line 11.5mm thickness, help to make the device feel compact for a 4.3in number.

The screen type is identical to that of the Lumia 800. It’s a Clear Black AMOLED display, melding the near-flawless contrast and black levels of OLED with a screen finish designed to reduce screen reflections. It won’t blast them away completely, but does help.

Although the screen size has increased, the resolution hasn’t. Microsoft still doesn’t allow Windows Phone screens greater than 800 x 480 pixels in res, so it’s not Nokia’s fault, but does result in a so-so 216dpi pixel density. As the Windows Phone OS is so very well tailored for this resolution, you won’t notice this when flicking around the Lumia 900’s menus, though.

In similar fashion, the  wonderful optimisation of the Windows Phone system means a single-core processor is easily enough to make the phone fly. The Lumia 900 has a 1.4GHz CPU, and we found navigation just as snappy as other top Windows phones – making this one of the quickest mobiles available.

While Nokia talks about its Lumia phones as if they are the only “real” Windows Phone devices, the Lumia 900 doesn’t offer much beyond rivals from HTC and Samsung other than a nice screen and lovely design. The software at its core remains almost entirely vanilla.

What small additions there are appeal foremost to a US audience too. There’s an ESPN app, providing video streaming of sports events, and an app spotlight app, there to highlight the latest and greatest wares of the Windows Marketplace app store.  It currently offers just a fraction of the content of the Android Market or Apple App Store, but Nokia was keen to stress it’s doing its best to make sure more big-name apps and games come to the platform soon – including a handful of EA’s top mobile games. But enough about apps.

Looking at the back of the Lumia 900, the sense of design déjà vu returns. The silvery camera housing looks just like that of the Lumia 800, and its core specs are the same too. It features a wide-angle 28mm 8-megapixel sensor and an LED flash, and there’s also a user-facing lens hidden in the bezel above the screen. It’s a 1.3-megapixel snapper intended for video chat. 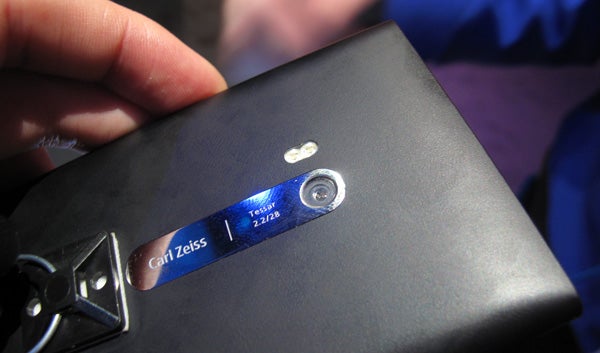 When screen size is largely a question of preference when it comes to mobiles, it difficult to call the Lumia 900 a real hardware upgrade over the Lumia 800, especially when we loved the original’s mid-size form. Not everyone wants a phone to dominate a pocket like a chubby, territorial lion and LTE connectivity doesn’t mean a great deal to us here in the UK – great as it is. However, we’d love to see a 4.3in version of the Lumia 800 arrive here, if only to make buyers who think they’re getting better value when more inches are on offer think twice before opting for an HTC Sensation XE or Samsung Galaxy S II. 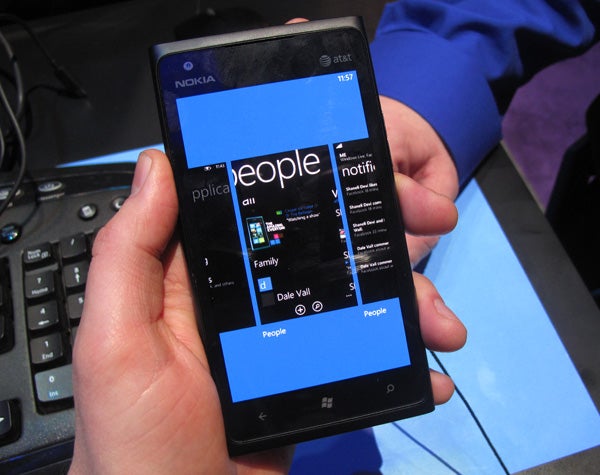 However, it does make us want Microsoft to hurry up and loosen its Windows Phone hardware restrictions. If a 800 x 480 pixel screen can look this good, imagine how impressive a 720p one might be. The Lumia 900 is currently exclusive to US carrier AT&T and will be available in black and cyan finishes when released later this year.

When super-fast 4G connectivity is one of the Lumia 900’s core features, and something that won’t be widely available in the UK for yonks, we see this new Windows Phone 7 device as a minor iteration on the Lumia 800. But that’s no bad thing when it has an equally well-built, jaw-droppingly gorgeous bod. While we like that Nokia hasn’t blasted out a dozen half-hearted Windows Phone handsets to date, a 4.3in option couldn’t do the Lumia series’s sales any harm.