Nokia makes some of the best phone cameras, but the Lumia 625 has a pretty bog-standard lower mid-range camera setup. It has an f/2.4 lens (not particularly fast) and a 5-megapixel sensor of unremarkable size. Crucially, though, it does have an LED flash, making it far more versatile than the flash-less Lumia 520. 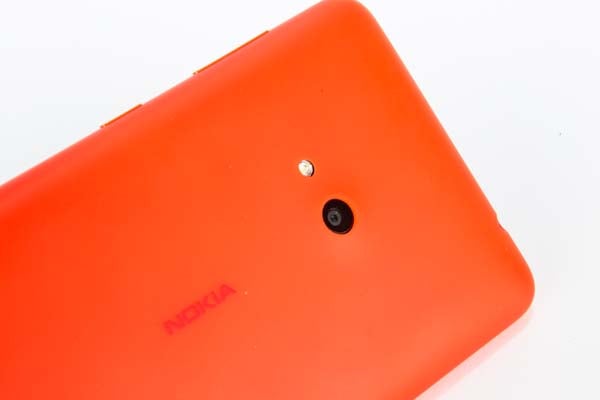 In good lighting, performance isn’t too bad either. Despite the similar specs, photo performance is significantly better than the Lumia 520. You can expect cleaner photos and better colour reproduction suggesting the Lumia 625 has a better-quality sensor or lens (or both). Exposure is pretty even too, resulting in some surprisingly good-looking shots. 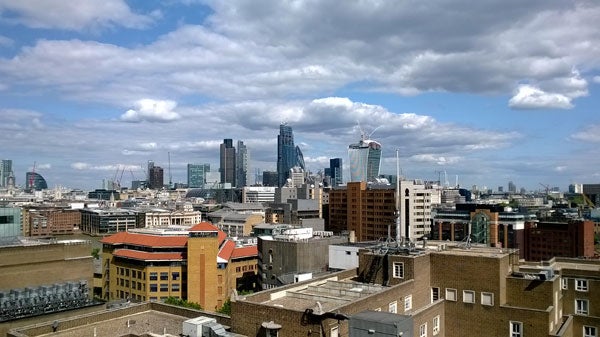 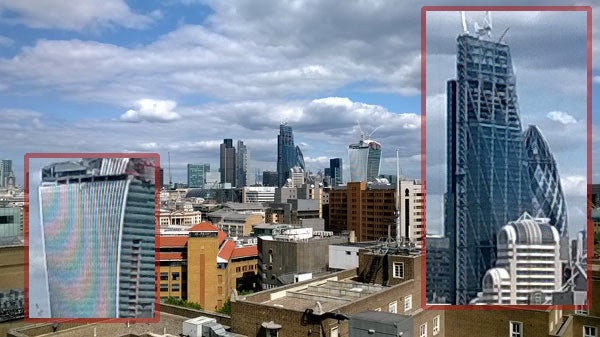 Comparing images with ones taken with the Nokia Lumia 925, though, it’s pretty clear this isn’t a high-end camera. You can clearly see the rainbow noise caused by the close-knit lines of the building near the Gherkin building. It’s a sign that it’s not a terrible camera, which would have reduced it to mush but demonstrates the Lumia 625 does not have the same ability to resolve detail as the Lumia 925. 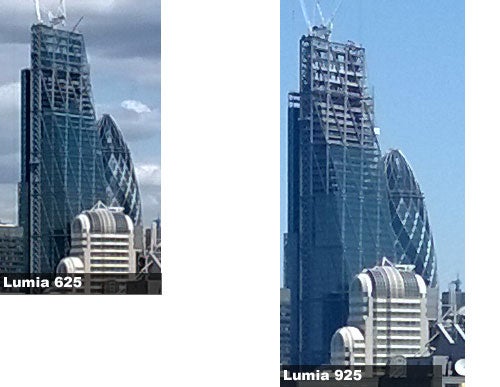 Turn the lights down and the Lumia 625’s camera performance predictably fails pretty badly. Low-light photos are very noisy, and the flash does not have the even coverage of a higher-end or dual-LED flash. 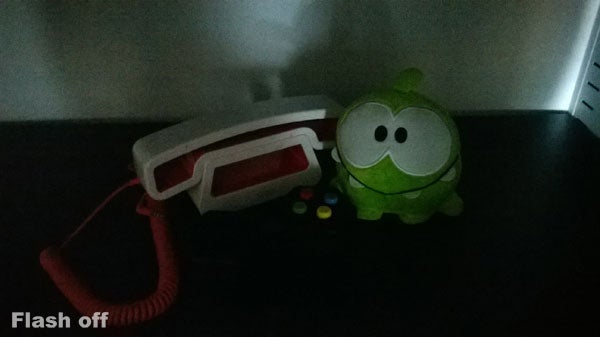 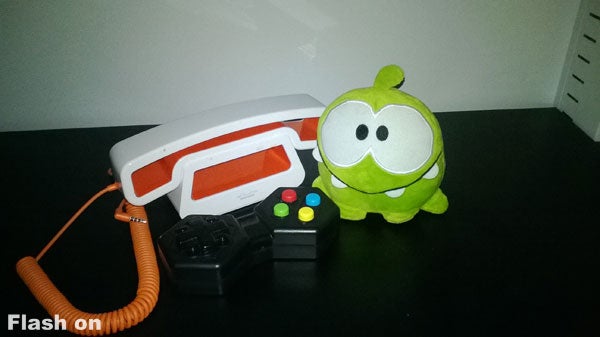 Perhaps the Lumia 625’s biggest camera success is how simple it is to use. A tap on the subject both focuses and takes a snap. Alternatively, you can use the physical shutter button, on the phone’s side. This is a two-stage button that focuses on a half-depress and takes a snap when fully pressed down.

We’re also glad to report that the Lumia 625 uses the LED flash to aid focusing when it senses it’s in poor lighting. Not all phones do this.

Once again, Windows Phone 8 fails a bit on the app front. The native camera app is pretty lean on features, relying instead on things called Lenses – additional camera modes that are downloaded separately (from within the app).

You get one Nokia-made extra Lens with the Lumia 625 called Smart Cam. This is a burst mode-based lens that lets you pick the best facial reaction of your friends, remove moving objects from a scene and more. It seems conspicuously designed to make the Lumia-series cameras keep up with the feature-packed snappers of phones like the HTC One and Samsung Galaxy S4.

However, in reality it’s only useful for fiddling about with for fun. It takes shots at significantly lower resolution than the ‘standard’ camera, making them pretty useless for anything beyond a quick Twitter post. Even for Facebook snaps we’d strongly recommend using the standard camera.

As already mentioned, the standard Lumia 625 camera app is dead easy to use, but is almost entirely bereft of additional modes. Most notably, there’s no panorama and no HDR. Both of these seem like staples for a modern camera phone. You can plug them in with additional lenses, but we’d really like to see these staples incorporated in the basic app. Lenses can feel a little clumsy, and many are paid-for. 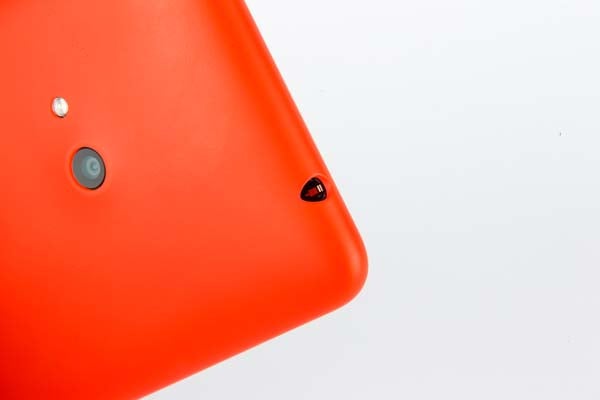 The Lumia 625’s earpiece speaker is of fairly decent quality. It’s reasonably loud, but sounds a little scratchy at top volume. Although we were unable to pin-point it when scouring the phone, there is a secondary microphone used to remove ambient noise from the call signal before it reaches whoever you’re talking to.

From sound quality of calls to music quality, Nokia Lumia 625 has a pretty poor internal speaker. It’s a mono speaker that outputs from a hole on the phone’s rear. For a phone of its size, the scale of the speaker’s sound is disappointing. It’s tinny and brash, and not particularly loud.

Some consideration has been put into sound quality in another respect though, as there’s a Dolby mode that purports to alter sound for the better by creating a ‘virtual surround’ sound stage. You can turn this on when using headphones.

It’s a bit too invasive for music, but it works fairly well for films, making the soundstage sound appear more expansive (if not any wider). Thanks to the clean headphone output, microSD memory card slot and the decent integrated music player app, the Lumia 625 makes a handy little music player. 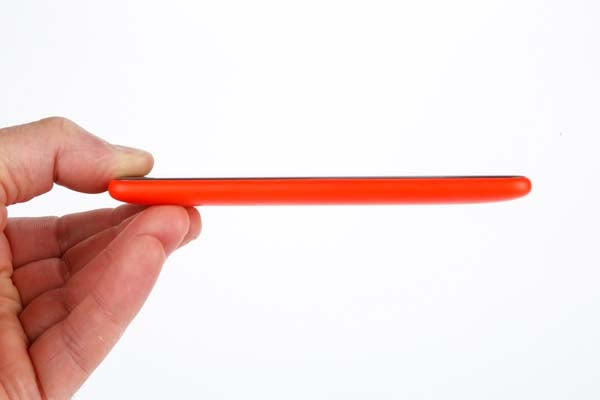 It’s not the perfect road warrior, though. The rear may be removable, but you don’t have any access to the battery. It’s a 2,000mAh unit that’s locked into the phone.

Battery life is good, though. Naturally, if you’re using 4G (or even 3G) a good deal, you will need to charge this phone every day. However, with light use it will sail through a couple of days’ use without a charge, thanks to the relatively battery-efficient way Windows Phone 8 can operate. The low screen resolution also helps too.

The Lumia 625 will play video for about 10 hours constantly off a charge, although as already noted the low resolution means it’s not really as good a video jukebox as the large screen size might suggest. 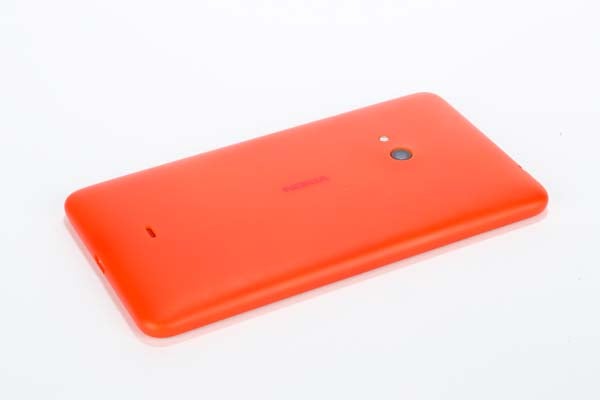 The Nokia Lumia 625 is yet another solid value Lumia phone. Set to sell for around £180 without a contract, it’s one of the most affordable routes to 4G land (forgetting the pricey 4G contracts).

However, it is not a miracle. The screen really doesn’t have enough pixels for its 4.7-inch size, and it’s particularly noticeable when watching videos or browsing the web – both areas where a large-screen phone should excel. Specs-per-pound, this is a cracking phone. But in the flesh there are some real compromises to deal with.

If you have £200 to spend and you are not fussed about having a 4.7-inch screen or 4G connectivity, the Alcatel Touch Idol with a 4-inch display or the smaller Nokia Lumia 620 would be better alternatives

For more alternatives, head to our best mobile phones 2013 round-up.

The Nokia Lumia 625 is one of the cheapest 4G phones you can get. It’s colourful, stylish and has the same Windows Phone 8 OS as other Lumia phones. However, the screen is disappointingly low in resolution. With a 720p screen this would be a corker. In its current form this is a cheap 4G smartphone that’s not quite the finished article.