The 2.2GHz Qualcomm Snapdragon 800 processor and 2GB RAM provides the Lumia 2520 with plenty of pep. It turns on in just under 25 seconds and zips through Windows RT menus quickly. It doesn’t struggle in desktop mode either.

Opening apps and switching between menus is a doddle and even reasonably large Excel files open quickly. In benchmarks  the Lumia performs better than the Surface 2 with a 3D Mark score of 16,123 as opposed to 13,557. Even though it has the same processor and 1GB less RAM it also beats the Samsung Galaxy Note 10.1 2014 at 14,276.

We’ve had plenty of experience with the Snapdragon 800 and we know it is very fast. There won’t be many tasks that you can perform on the Lumia 2520 that will tax it enough to experience too much slowdown, although we did not some performance degradation when we had a lot of apps open – a problem exacerbated by Windows RT 8.1.

If you’re not aware of it, Windows RT is Microsoft’s attempt at creating a tablet operating system to rival Apple’s iOS and Google’s Android. It’s a far less mature operating system than the other two and, while it has some nice touches, it suffers from split personality disorder.

Microsoft has used Windows 8 – the operating system you may have on your PC – as the basis for Windows RT but has stripped it back so it can use lower powered, cheaper and more efficient processors that traditionally power a tablet. 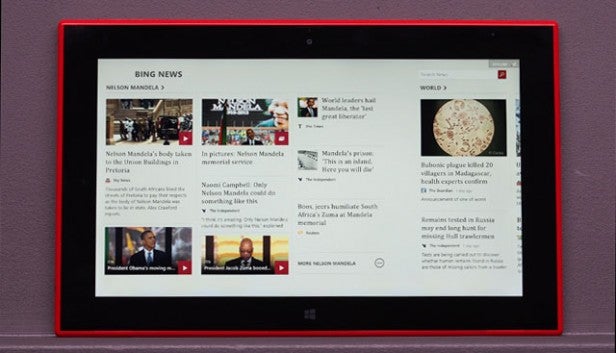 Bing News is a great app

The problem is that Windows RT 8.1 clearly wants to be its bigger brother. The tiled homescreens are fresh and vibrant and look and function better than both iOS and Android.  Some user settings can be accessed and tweaked from the ‘tile’ view. Invariably, however, you’ll need to get your hands dirty and access desktop mode for one reason or another. For us it was that we had too many apps open and performance was taking a bit of a hit. Having to go into task manager to end tasks, tapping small links meant for a bigger screen and a mouse just feels like a big step backwards from the bold simplicity of the tile UI.

You also can’t install the multitude of traditional PC apps (or programs as they used to be called in the good ole days) and games on it, despite the presence of a desktop version of Office. Instead you have to rely on the Microsoft Store. Make it past the tumbleweeds and there are a few gems. Netflix, Twitter and Facebook are on there and you also get free Office, Excel and Powerpoint pre-installed – very handy if you intend to use the Lumia 2520 for work. We’re also big fans of the Bing News which brings you internet news in a beautiful magazine like reader.

Unfortunately, if you like a bit of casual tablet gaming you’ll find the pickings slim and even staples like BBC iPlayer don’t exist. You can use the Flash enabled Internet Explorer browser to access the web iPlayer, but it’s nowhere near as intuitive as using the app on rival platforms.

We also couldn’t get it to find and connect to our Windows 7 Homegroup. We have not experienced this problem before with full-fat Windows 8 laptops and tablets but after repeated attempts we had to give up.

The Nokia Lumia 2520 comes with a 6.7 megapixel rear facing and a 1.2 megapixel front facing one for video calls. In terms of numbers the rear cam sounds more impressive than the 5 megapixel affair on the iPad Air but in practice it does not even close – primarily because of the small 1/3.4-inch sensor. 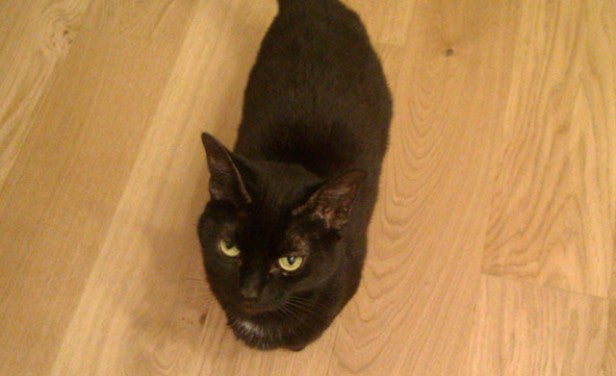 Even in good light there is apparent noise and fuzzy edges

It’s surprising that a company with Nokia’s pedigree in phone cameras (the astonishing Nokia 1020 is a case in point) can get it so wrong, but both cameras suffer from excessive noise, even in reasonable well-lit conditions. Video calling, in particular, is a dark blurry mess.

Pictures from the rear camera are grainy and focusing is a struggle. Thankfully it’s unlikely you’ll be using such a big tablet for too many photos but we believe that if you’re going to bother with a camera on a tablet it should, at least, produce passable pictures. The Lumia 2520 doesn’t.