With a huge 3,400mAh battery to power it, the Nokia Lumia 1520’s battery life ought to astound. It isn’t quite as good as we initially expected, but it’s very good all the same.

Our day using the Lumia 1520 started around 7am with a full charge. After an hour-long commute listening to music the whole way, browsing the internet and a smattering of photo opportunities, the battery stood at 85%.

It was left mostly idle with Wi-Fi on until lunchtime, though we turned off Wi-Fi around 11:30 and took a few test photos. By 1:30pm it had 60% left, which dropped to 44% by 4pm after a meeting in which we used Evernote to take notes and took some time to rattle off 10 or so more test shots.

Later on we spent an hour or so listening to music with the screen off, which means when we headed home at 6:30 we had 31% left. Post the journey home, where we mostly read a book with a small sprinkling of browsing and gaming, the 1520’s battery read 20%. This was enough to last the rest of the evening where it mostly sat idle. 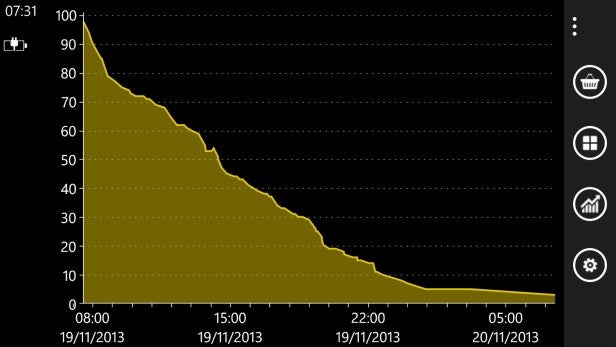 This was a pretty heavy workload for a whole day, particularly as we took at least 20 or so photos through the day. Lighter use should cause no problems whatsoever, though unsurprisingly keeping an eye on screen brightness is important. It’s a real power drain, especially as the auto brightness system typically sets it higher than it really needs to be and there’s no quick access to control it.

Call quality is sound. The earpiece is loud and precise, with no annoying distortion or compression of voices. We never had any trouble making ourselves heard, either, even with a moderate amount of background noise.

The built-in speaker, however, is poor. It’s not very loud and because it’s on the back, it’s hard to use it as a speakerphone for hands-free calls when you’re at home — something worth considering if you like to use the speakerphone often. 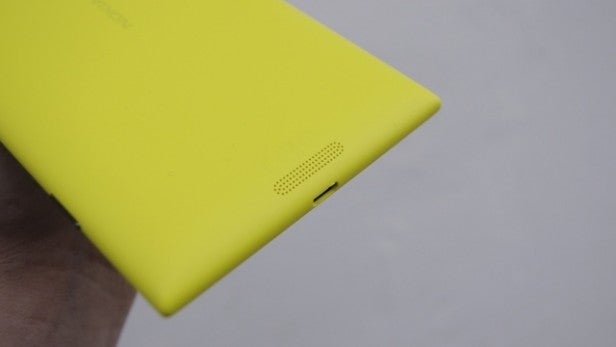 Storage isn’t a problem on the Lumia 1520. It comes with 32GB built-in and there’s support for microSD up to 64GB. What’s more, unlike most phones, the card slot is reasonably accessible as it slots into the top left edge. You’ll need a ‘poky’ (that’s a technical term) to extract it, but it’s useful to have easier access to it.

This obviously means the rear isn’t removable, which means the battery isn’t user replaceable. This isn’t a huge problem given the reasonable battery life, however, and the resultant build quality is worth it. 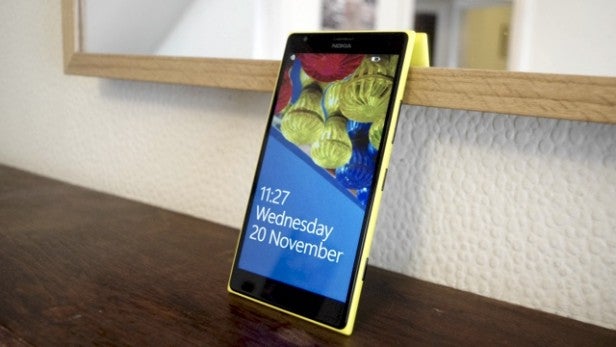 The Nokia Lumia 1520 is a very good phone, but it’s not for everyone. Its size accounts for most of that, as it’s large even by ‘large phone’ standards and heavier than some people will tolerate. The camera isn’t a total success, either, despite the very good image quality.

Then there’s Windows Phone 8. It has many qualities, but its weaknesses are much harder excuse when you’re spending this much on a phone. The apps just aren’t there and it’s overdue an update to catch up with iOS and Android on some fronts.

So what’s the answer? If you’re a hardcore Windows Phone fan, this is the phone to buy. It’s the fastest, the most feature rich and most complete Windows Phone out there. But that doesn’t make it the best large phone (see: Samsung Galaxy Note 3), while photography enthusiasts are still better served by the Lumia 1020.

The Lumia 1520 is a watershed phone in many respects. It brings Windows Phone hardware on par with the rest of the smartphone world, but the software still needs a bit of work.

Next, read our tablet buyer’s guide