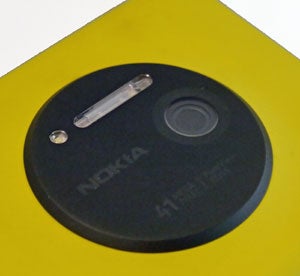 With
a large 1/1.5-inch sensor, you’d expect the Nokia Lumia 1020 to come up
with excellent image quality. And, for the most part, it doesn’t
disappoint.

The Lumia 1020’s 34-megapixel images blow away the
competition in terms of the sheer amount of detail rendered (in good lighting).
Side-by-side, the Lumia shames the Galaxy S4 with incredible
reproduction of detail for a phone camera.

The Lumia 1020 also
has a very wide field of view when shooting in widescreen, with an
equivalent focal length of 25mm (in the 35mm standard measure). As
standard, the Pro camera mode created both 5-megapixel and 34-megapixel
images – the lower-res one shrinks the image while trying to retain as
much detail as possible. 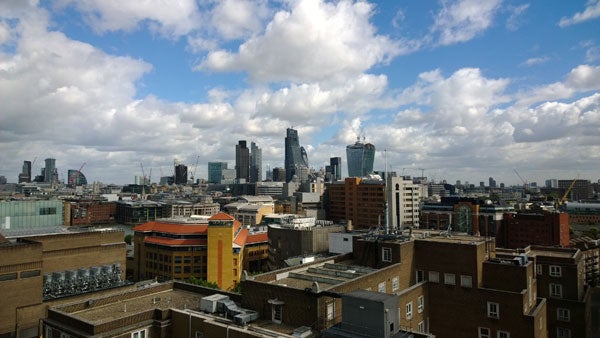 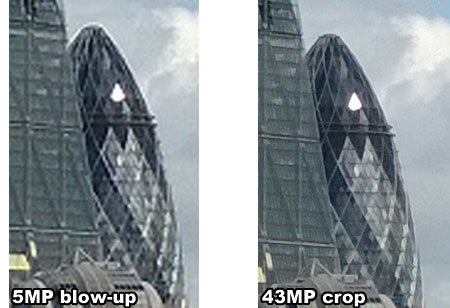 The cut-down 5-megapixel shot retains a good level of detail, but clearly uses some sharpening techniques – revealed by the white outline around the Gherkin.

Up against the competition… 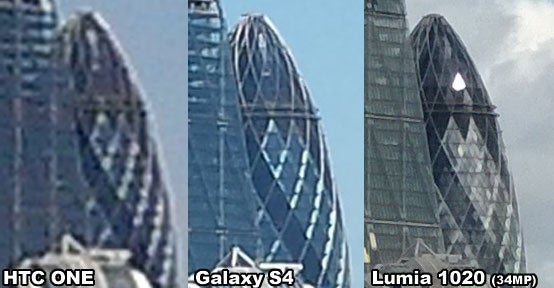 Of
course, such a high-resolution camera sensor also helps to reveal the
deficiencies of the phone’s plastic lens. The Lumia 1020 has a decent
six-element lens, but the image gets very soft towards the outer edges
of the picture  – it’s only really the middle third of the frame that’s
particularly sharp. Towards the extreme edges of the photo there’s
flat-out distortion of objects.

This is only made
quite so obvious because of the high-grade sensor, though, and even
‘proper’ lenses suffer from this sort of softness at the edge of the
frame. So why are we mentioning it?

It affects the worth of the
recompose feature that’s a key draw of the Lumia 1020 camera – you can
‘reframe’ the 34-megapixel shot post-shoot, zooming in and rotating the
frame to produce a new fairly high-quality 5-megapixel one.

Having
soft-edged photos limits how much you’ll be able to zoom in without
seeming that you have done so in the final pic. But, still, it’s far
better than you’d get with just about any other phone camera. 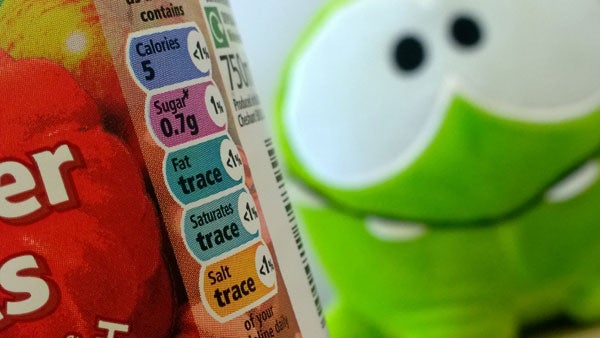 Reframe lets you make funky recrops like this in seconds

In short, the Lumia 1020 is excellent in terms of the sheer amount of detail is can render when given a well-lit scene. For some photos taken by the pros, check out our page of pics taken by famous photographer David Bailey.

Low-light Performance and Flash
Is
the same true when the lights go down? Performance is well above
average, but for the best results you need to understand how the Lumia
1020 works.

The keys to low-light success with the Lumia 1020
are optical image stabilisation and the Xenon flash. Both can be used to
create much better-than-average shots in rubbish lighting.

First,
let’s tackle optical image stabilisation. The Lumia 1020’s lens
‘floats’, in that it can be tilted many times a second using tiny motors
that live in the phone’s camera housing. This lets the phone take sharp
(or relatively sharp) images using longer exposure times without using a
tripod. Using a non-OIS camera, you’d end up with a blurry mess, as
even a surgeon’s hands aren’t completely shake-free.

When
shooting static objects, the Lumia 1020’s stabilisation is excellent,
capable of making shots in mediocre lighting far less noisy and far less
washed-out than they would otherwise appear. When fiddling with the
shutter speed in the Pro Mode, we were quite amazed at how long an
exposure the Lumia 1020 can indulge in without becoming a blurry mess
(assuming you don’t have the DTs). 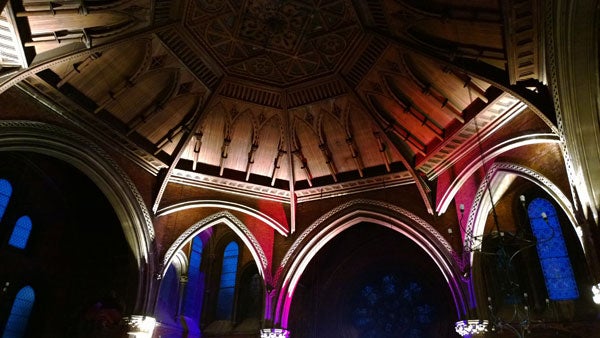 However,
when shooting people OIS is far less useful. A longer shutter speed
turns moving limbs into blurs. Unless your shots are entirely posed, OIS
does not result in good low-light photos of people.

You can see this effect in this shot of News Editor Luke taking a swing at Urban Golf – a golfing simulator. 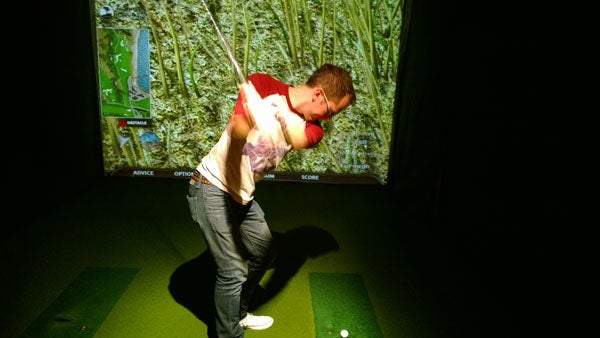 That’s
why the flash is here. The Nokia Lumia 1020 has an exemplary flash
array – employing a ‘standard’ LED light to aid focusing in low lighting
and a powerful Xenon flash. Also known as ‘a proper flash’ around these
parts.

Xenon flashes are useless as a focusing aid because –
unlike LEDs – they cannot give off a constant stream of light but a
quick burst that lasts just a fraction of a second long. But why are
Xenon flashes better than LEDs? Much as other phone makers may say their
LEDs are on-par with Xenon flashes, there are significant benefits to
the Lumia 1020’s Xenon type.

It offers a far more even spread,
greater range and less of a tonally imbalancing effect than just about
any LED flash. It’s a reminder that LED flashes aren’t really flashes –
they’re torches.

There are some practical downsides to using a
Xenon, though. It’s far more power-hungry than an LED flash – one of the
reasons why Nokia produces a camera grip with an extra battery (around
£70) – and takes a short while to recharge. This compounds the issue of
the Lumia 1020’s relative camera sluggishness (in terms of shooting
performance, not focusing).

The Nokia Lumia 1020 doesn’t like to compromise on photo quality, but there are sacrifices it has to make elsewhere.

One
of the best reasons to have a good camera is to take arty-looking shots
that you can show off to your friends in order to look terribly clever
and talented. The easiest way to do this is with a shallow depth of
field shot.

This is where your foreground is in focus, but the
background is nice and blurry. That blurriness is known as bokeh, and
the Lumia 1020 isn’t too bad at making it. The level and quality of bokeh a
camera can create is based primarily on the camera’s lens, but the crop
factor of the camera’s sensor also affects it.

Comparing
the Lumia 1020 with the HTC One, it’s clear that the Nokia phone is
capable of creating superior shallow depth of field effect than its rivals. Forgetting
that the Lumia shot is both sharper and more vivid for a minute, the
plush toy is far blurrier, bringing out the squash bottle with far more
style. And yes, we probably need to invest in some more props.

Here are some quick shots of the shallow depth of field effect in action. 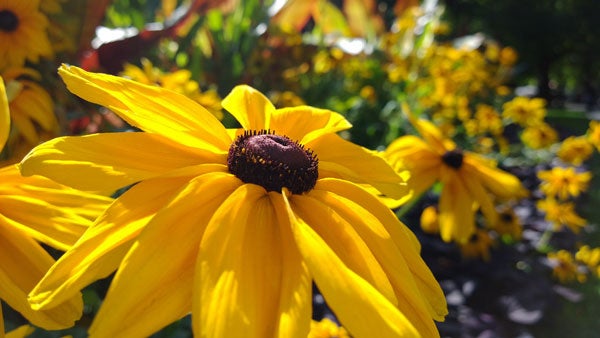 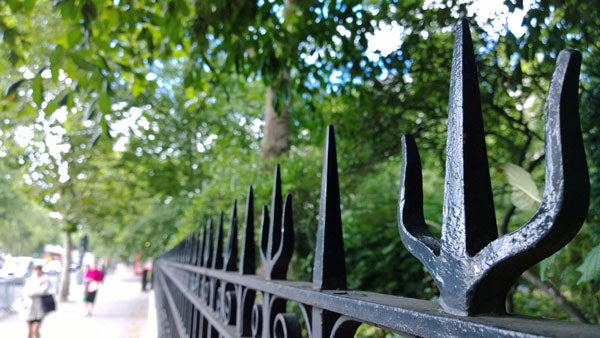 The
other top way to show off to your friends photographically is with a
macro shot – an extreme close-up that tries to offer as much fine detail
as possible.

Here the Nokia Lumia 1020 disappoints a little
because its focusing distance isn’t anything to crow about. Get the
camera any closer than about 13cm and it won’t be able to focus on a
subject – the wide angle 25mm focal length really doesn’t help here
either (making photos appear further away from the subject), and we were
left wishing we could get a few centimetres closer to the action. 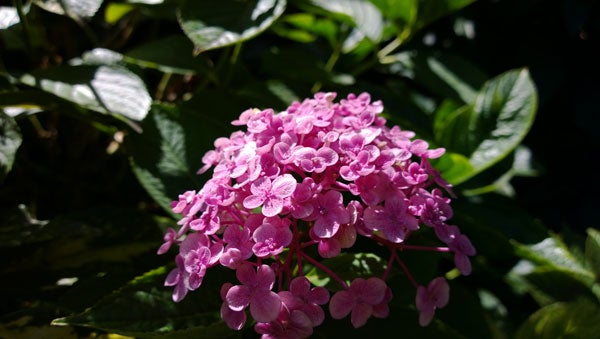 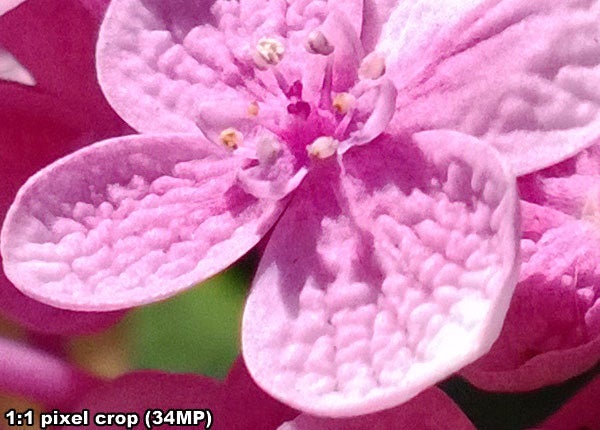 However,
analyse your shots post-shoot and you’ll realise the high-quality
sensor does mitigate. You can’t get that close, but you can capture
some great detail without much effort. 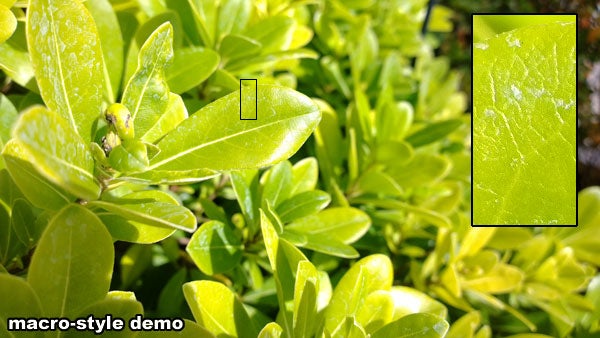 VS a ‘Proper’ Camera
It
has its issues with shooting action sans-flash, and with shooting
speed. But the Lumia 1020 is a king among mobile phone cameras. However,
is it really a match for a ‘proper’ camera? The shot below (taken in a
near-pitch black room without flash) comparing the Lumia 1020 with the
CSC Sony NEX-5R, tells you all you need to know.

The answer? Not
up against an APS-C size sensor. But it has a good go – and it’ll
compete better with smaller-sensor cameras like the Pentax Q7 and Nikon
J3.

(for the record, both of the above shots look pretty dreadful full-size)

Panorama
There
are just a few extra Nokia Lumia 1020 camera bits to cover. Although
there’s no HDR mode built-in, you do get a Panorama ‘lens’. This isn’t a
special one made just for the phone’s high-end camera, and it’s not as
good as the iPhone 5’s full-resolution panorama mode.

It
captures the shot at severely reduced resolution, resulting in pretty
disappointing images. You’re probably best off manually stitching your
own panoramas if you’re looking for a shot of a landscape to treasure
and/or blow up, or looking for a better panorama Lens.

Video Capture
The Nokia Lumia 1020
isn’t at the cutting edge of headline features when it comes to video
capture. Phones are starting to incorporate 4K video capture, where the
1020 is stuck at plain old 1080p.

In reality, this is more than
enough, and the phone has far more worthwhile features. The best is
in-video optical image stabilisation.

The same lens motors that
eliminate the shaky-hand effect in photos are used in video, and they
eliminate the tremors that make handheld video look so amateurish. It
won’t perform miracles – jolts will still register as jolts and when
pushed the OIS can cause a screen tearing effect, but it increases the
quality of casually-taken video a good deal. 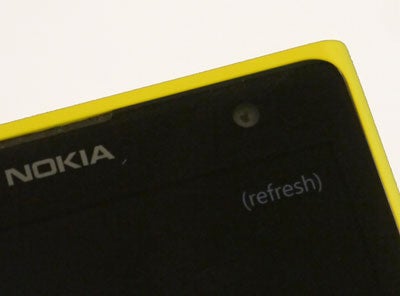 The Nokia Lumia 1020 doesn’t have an eye-catching front camera to match its rear, but it’s still above-average.

It’s
a slightly offset-from-centre 1.2-megapixel sensor that’s only really
there for selfies and video chat. It’ll record low-res stills and 720p
video too, though. Video quality is much, much softer than that taken
with the rear camera, but it’s far less noisy than it could have been.

Recording quality is good, but there’s no
magic ‘gating’ of recorded audio to block out unwanted ambient noise.
What it can do is record much louder audio than a normal phone without
distorting. Unfortunately we didn’t get a chance to record a gig with
the phone, but recordings in noisy environments like the London Tube
didn’t suffer from distortion.