It’s not often that Nokia releases a new range of business phones, and when it does you’d better sit up and take notice. The last time round, it was the E61 that had us in raptures, with its Blackberry-beating keyboard and good range of software and features. But it’s been a while, and since 2006 much has changed in the smartphone market.


Roll on 2008 and Nokia has a new range of business handsets for us to drool over. And I mean drool, because if the forthcoming E66 I have in my hand right now is anything to go by, Nokia is onto a winner again. It’s a business phone, but far from being drab and grey, like many business handsets, this one is slim, sleek and beautifully built. 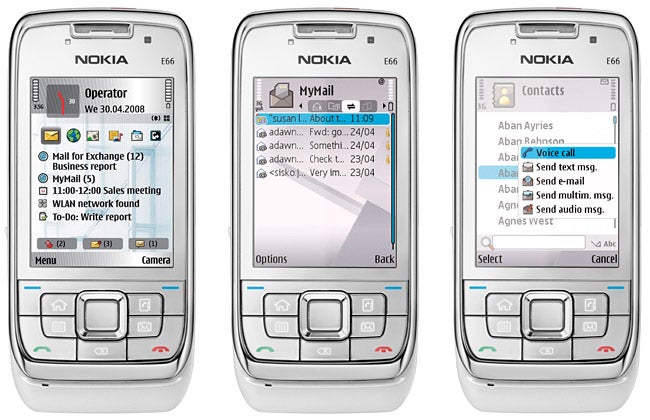 It’s a slider design and the mechanism feels wonderfully smooth and solid, popping open with a thunk that BMW engineers would be proud of. And the phone’s exterior is full of other luxury touches. The glamorous chrome trim around the 2.4in screen catches the light in way that catches the eye, the mirror-finish buttons below the screen light up with a cool white glow when the E66 is unlocked and the patterned steel panel on the rear adds a touch of lustre and sparkle. This is a business phone with bling, make no mistake about it.


It’s slim too, for a slider, at a 13.6mm, and the simple numeric keypad (this is a phone for the purist) allows for an extremely narrow profile too. Compared with HTC’s Touch Dual, which boasts a similar design, it shaves a millimetre off the thickness and a good half a centimetre off the width. And that screen, though fairly standard in its 240 x 320 pixel resolution, is absolutely brilliant when you take it outside. It’s transflective and is perfectly visible in bright sunshine, as long as you don’t mind being blinded by the gleam from the chrome trim, that is.

The opulence doesn’t stop at physical design, though. The E66 is packed with sensible and clever features that we’ve come to love Nokia handsets for over the years. Embedded inside is an accelerometer, much like the iPhone and HTC Touch Diamond, used for flipping the screen from horizontal to vertical as you rotate the phone in your hand. This is especially useful when browsing web pages, but an even more handy application of the hardware is its ingenious hang-up feature. When the phone rings, if you don’t want to answer, simply flip the handset over and it’ll silence it for you. 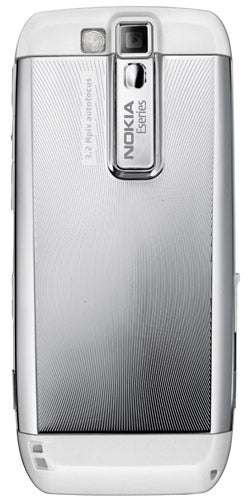 The list of core phone hardware proves the E66 is no slouch either. Webpages load up swiftly thanks to HSDPA support plus there’s Wi-Fi connectivity, Bluetooth 2.0, a 3.2-megapixel camera and front-facing VGA video call lens, an FM radio, and the inevitable GPS receiver. The latter is accompanied on this handset by Nokia’s own Maps 2.0 application. This picked up my location in central London very quickly, and though it offers turn-by-turn navigation, don’t get too excited over it – it’s a subscription-based extra, and not that cheap either. Prices start at £7 per month, £20 for three months or £55 per year.

The numerical keypad design means that this isn’t a phone you’re going to want to use to type out long emails and documents on, but it doesn’t mean you don’t need to keep on top of things. And to this end, the E66 ships with an impressive list of preinstalled email clients. Support for POP3 and IMAP clients works brilliantly – just pop your Gmail details into the wizard and you’ll be ready to rock and roll in seconds. A nice touch is that the Nokia client defaults to IMAP rather than POP3. For the first time, Nokia’s excellent Microsoft Exchange client is preinstalled, and this allows – after a bit of fiddling with settings – for push email to be setup, complete with calendar, contacts and to-do list synchronisation over the air. Much better than having to plug in and sync with wires using Nokia’s PC Suite application.


And that’s not all. Click on the download folder and you’ll find several other messaging options, ready to be installed, from Windows Live Messenger and Hotmail to Yahoo! Go. There’s no sign of a Blackberry client, though, which is a disappointment.

The Nokia E66 is a lovely phone all-round, and the operating system – Symbian S60 3.1 – makes it feel extremely nippy to use, but there are areas of concern. The first is the battery, which is a disappointingly low capacity 1,000mAh, bog-standard, lithium-ion unit. On my sample – admittedly not a final production handset – this resulted in a life that extended to around two-and-half days of light use. It’s not the worst I’ve come across in an HSDPA phone, however, and it may improve, of course, when the E66 hits the shelves in mid-July.

Document compatibility is also a bug-bear. There are viewers on the phone for Word, Excel, PowerPoint courtesy of QuickOffice 4.1 (Office 2007 docs, unsurprisingly are not supported in that version), plus there’s support for viewing PDF files, and a ZIP tool, but this is not a licensed version, and you can’t edit those files. I was disappointed to find that, unlike with the firm’s recent N-series of multimedia phones, the E66 lacks a 3.5mm headphone output in favour of a 2.5mm headset connection. This seems to be a common theme with business smartphones these days, but for the life of me I can’t work out why. Business users like to listen to music too, and with a 2GB microSD card sitting in the E66’s expansion slot, it seems an opportunity wasted. And, finally, it’s irritating in a phone that’s likely to spend a lot of time sitting on desks next to PCs and laptops, that you still can’t charge it over USB.


Despite the niggles, I have to say I like the E66. If you do a lot of emailing and messaging while you’re out and about and prefer the convenience of a QWERTY keyboard, then you’re probably better off with the E71 (which we’ll be reviewing very soon).


But for those who prefer a phone to be, well, a phone first and an emailer second, then its combination of sleek design, solid business features and ease of use make it one of the most attractive handsets on the market right now.