The E63 is essentially a cut down version of Nokia’s venerable, keyboard-touting E71 smartphone that was warmly received when it was released last year. In fact, that handset managed to rack up our top score when we reviewed it back in July, so the E63 certainly has a lot to live up to.


The phone follows the E71’s design quite closely, but there are some significant differences. For instance, this model is slightly wider and fatter, and forgoes the E71’s metal battery cover in favour of a plastic one with a slightly rubberised finish. It means that the phone doesn’t feel quite as sturdy, but the pleasing ‘grippiness’ of the new battery cover does counter this somewhat. Overall, we’d say that while the final finish is not as solid as the E71, it still looks very classy. 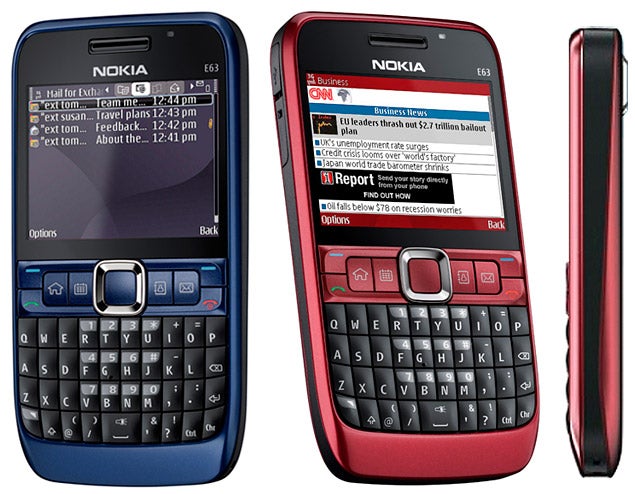 One of the best things about the E63 is its excellent keyboard. It takes a lot to match the keyboards found on RIM’s Blackberry devices but in our opinion, Nokia has managed it here. The keys are relatively large and slightly domed so it’s easy to hit individual letters without accidentally nudging the key next to it. Furthermore, all the important symbols such as the ‘@’, full stop and question mark characters can be hit without having to first press shift, which speeds up typing when you’re tapping out emails or text messages. The E63’s keyboard also has some improvements over the one used on the E71. Nokia has shortened the space bar and used the extra space on the right to add dedicated keys for the ‘Ctrl’ and ‘Char’ functions and on the left for two keys that give direct access to the ‘(‘ and ‘)’ characters.


Above the keyboard sits a cluster of controls including shortcut buttons for the home screen, calendar, contacts and messaging functions. Nestled in the centre of this lot is a very traditional four-way keypad. It could be argued that a Blackberry Pearl-style trackball or optical touchpad, like on Samsung’s i780, would have enhanced the E63, but actually the d-pad is perfectly adequate in all the main applications, apart from perhaps the web browser.

The top half of the phone is dominated by the display. This screen isn’t the sharpest around as it has a resolution of just 320 x 240, but given its relatively small 2.36in size, text and graphics still look quite crisp. It’s also very bright, so it’s brilliantly readable – even outdoors in direct sunlight.


Of course, one of the key usages for a phone like this is messaging and on this front, the E63 scores highly. Setting it up with an email account is incredibly straightforward. You just enter your email address and password and the phone does its own software configuration in the background to get the account up and running. All the main protocols like IMAP4, POP and Exchange are supported, but sadly, Blackberry Connect is noticeable by its absence. When it comes to email attachments, you should have no problems opening them. Viewing and editing of Office documents is supported via a copy of QuickOffice, and there’s both a PDF reader and ZIP utility pre-loaded as well. 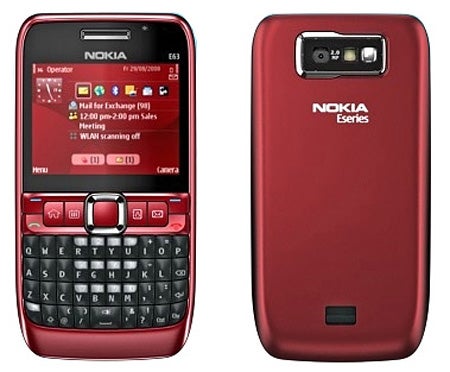 On the Internet side of things, the phone’s browser does a respectable job. It generally retains the formatting of pages quite well and as you move around it pops up a thumbnail view of the entire layout to aid with navigation. However, it’s certainly not on a par with the iPhone’s Safari in terms of usability.


Clearly, as this handset retails for around £80 less than the E71, Nokia has had to make some cuts. Unfortunately, one of the features to get the chop has been GPS, which is a shame, as it’s something that’s becoming increasingly standard even on handsets in this price range. Nokia has also taken out support for HSDPA, so you’re limited to standard 3G speeds for web browsing and data downloads, although there is Wi-Fi support for when you’re at home or within range of a hotspot.


The spec of the camera has also been reduced. Instead of the 3.2-megapixel one found on the E71, the E63 makes do with a 2.0-megapixel snapper, and as you would expect, shots taken are of below average quality. At least it does have an LED camera light that helps when taking shots in low light and doubles as a torch – handy for when you’re trying to find the right key in the dark (just press and hold down the space bar to turn it on).

The E63 has a micro-USB port for syncing with your computer, but unfortunately you still can’t charge the handset over USB, which is a bit annoying. There’s also a microSD card slot for adding extra storage and as this is located on the left hand edge of the phone behind a plastic flap it’s easily accessible and lets you hot swap cards. 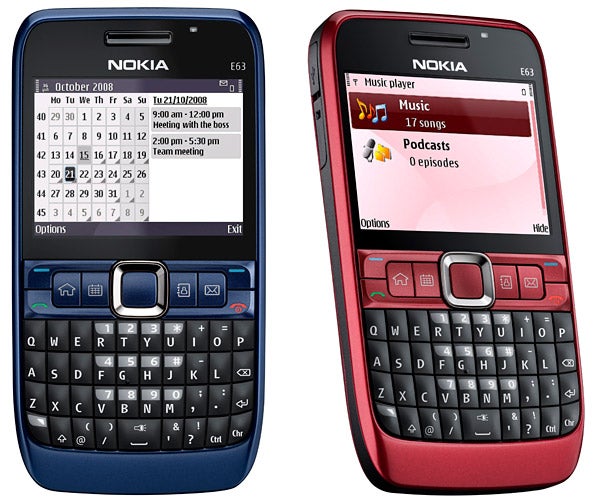 Another plus is that Nokia has kitted the E63 out with a standard headphone jack so you can use your own (3.5mm jack) cans without the need for an adaptor. However, as the supplied stereo hands-free kit doesn’t have a split cable you’ll lose the hands-free functionality it offers if you use your own headphones. In addition, the cover for the headphone jack isn’t attached to the case, and as it’s so small you’re likely to lose it within the first day or so.


As with pretty much all of Nokia’s handsets, the call quality on the E63 was first-rate. But what’s even more impressive is the phone’s battery life. Whereas most smartphones are lucky to keep going for around two days, the E63 was good for three to four days of medium usage, which is seriously impressive.


While the E63 isn’t quite as impressive as the E71, it’s still a very good handset with excellent messaging support, a first-class keyboard and stunning battery life. If you’ve got the money the E71 is the better option, but if you can live without the GPS and HSDPA support then you certainly won’t be disappointed with the E63.