Nokia’s N series handsets are usually the ones that steal all the limelight, but for many it’s the rather more understated and more business-focussed E series smartphones that have been among the company’s most impressive offerings. As a result the E52 has a lot to live up to, especially as siblings like the E71 and E55 have been pretty much universally well received. The good news is that, for the most part, the E52 does the E series family proud.


The E52 is one of the smallest and slimmest smartphones around at the moment. Like the E55 it’s just under 10mm thick, and while it’s ever so slightly wider than its sibling you’d need to get out the ruler to tell. It’s available in either grey or gold and both manage to look sharp and stylish without coming across as overly showy. Despite the thinness of the phone, it feels remarkably sturdy as it doesn’t twist and flex like some of the cheaper smartphones around. 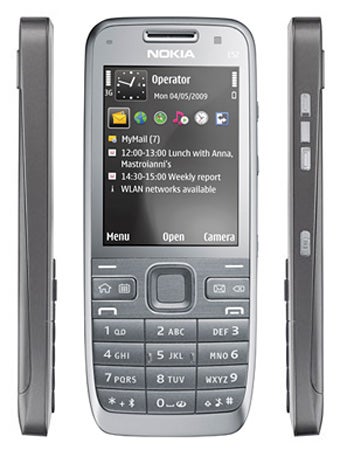 We’ve now been spoilt by great touchscreens on handsets like the iPhone and HTC Hero, so it’s hard to get excited about a normal, non-touch LCD display, but we have to say that the one Nokia has used here is still pretty impressive. Measuring 2.4in diagonally, it’s quite large for a standard candy bar shaped phone and completely dominates the front of the handsets. It’s got a decent resolution of 320 x 240 pixels so text and graphics look nice and sharp, and although it’s not as expansive as the screens on today’s touch devices, it’s still comfortable to use for a bit of web browsing or for reading longer emails. Indoors it looks very bright too, but it is a little bit reflective when used outside in direct sunlight.


The bottom of the screen is flanked by two softkeys and beneath these lie the traditional D-pad and main cluster of shortcut keys. The D-pad is nice and large and just as importantly feels responsive to the touch. Certainly navigating around the menus proved no problem. Either side of the D-pad are two shortcut keys. The one on the right gives quick access to the messaging app, while the one on the left calls up the calendar app. Both are welcome additions as these are the two most common apps that you’re going to be using throughout the working day. Alongside these are a home button, back button and two call control keys.

While many of Nokia’s recent smartphones have flirted with QWERTY keyboards, the E52 takes a much more traditional path as it relies on a standard phone keypad for text entry. This is both good and bad. The good side is that you don’t have to learn to use a new style keypad as you do on the E55, but the downside is that text entry is that bit slower as you’re totally reliant on the, admittedly rather good, predictive text engine to do a lot of the heavy lifting. This is fine if you’re a fast texter, but less than ideal if you’re not and need to compose and reply to lots of emails.


The phone uses the 3rd edition of Nokia’s Series 60 smartphone OS. Series 60 is starting to shows its age next to newer operating systems like Android and iPhone, but it’s still relatively easy to get to grips with and there’s a decent line-up of business-style software included, such as the PDF reader and QuickOffice application for editing work documents. The web browser is one of the better ones you’ll find on a standard candy bar shaped phone as pages are quick to render and there’s a nice thumbnail view of the sites you have previously visited when you hit the back button. It’s also got Flash Lite support, so some Flash content can be displayed. 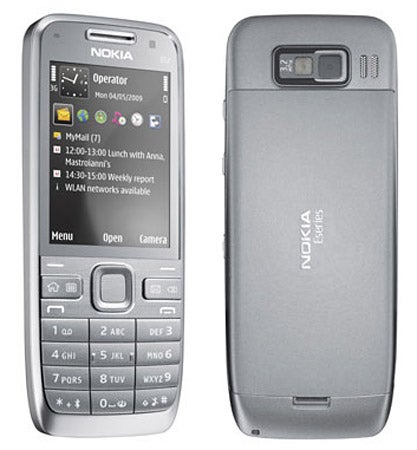 In terms of connectivity, the E52 puts in a good showing. Naturally it’s quad-band so you should have no problems using it on your travels, and you get both HSDPA and Wi-Fi support for fast data download speeds. As well as this, there’s GPS onboard which works nicely with the preloaded trial of the Nokia Maps software.


All work and no play makes Jack a dull boy so the E52 naturally has some entertainment features too. You get the standard Series 60 music player and as Nokia has kitted the E52 out with a normal headphone jack you don’t have to rely on the supplied stereo headset, although it’s not actually too bad in terms of sound quality. And along with the usual Nokia Video Player, there’s also a decent YouTube player so you can watch videos of people hurting themselves in a wide variety of different ways. Like the E55, the phone has dual camera’s for video-calling, but it’s the 3.2-megapxiel shooter on the rear that’s of most interest. However, the shots it takes are the usual run-of-the-mill cameraphone fare. There’s a decent amount of detail, but it’s not great in low light and sometimes colour can look a little bit muted.

The EU wants all smartphones in the future to standardise on micro-USB ports for charging to avoid millions of phone chargers going to landfill every year. The E52 obliges as the micro-USB port handles both syncing and charging duties.


Most of the E series handsets have been very impressive performers when it comes to battery life and thankfully the E52 doesn’t change this trend. Nokia quotes a talk-time of eight hours and standby time of up to 23 days, which seemed pretty conservative in comparison to what it achieved during our test period. We used a range of features such as the GPS, Wi-Fi and HSPDA downloads over a few days and found that it managed to keep running for three days before it needed a recharge. With most smartphones you’re luckily if you get a day or a day and a half from their batteries, so the E52’s performance in this regard is highly impressive.

What’s more, the phone’s call quality is also first rate, but then with Nokia phones you kind of expect that. However, the E52 actually includes noise-cancelling technology that tries to cut down on background noise picked up by the mic while you’re on a call. It works really well, although obviously there’s the odd squelchiness that can be heard every now and again when there’s a real racket going on around you and the noise-cancelling is working over time.


The E52 doesn’t exactly break new ground. It’s got a pretty standard candy bar layout and uses a normal mobile phone keypad for text entry, but perhaps that’s the point. This is a smartphone for those people who don’t really want a smartphone, but need some of the extra features they provide like good email support and the ability to view and edit work documents on the go. The fact that it does this while still offering great battery life and brilliant call quality is just a bonus.