Not being a flagship phone, it’s no surprise that the C6 isn’t the most glamorous, with its largely plastic exterior. Indeed the soft plastic screen looks particularly crummy thanks to its wobbly finish and propensity to pick up fingerprints. At least the slide mechanism is made from steel and feels strong.


That said, while it feels strong, due to a combination of the slippery matt surface of the back and the stiff slide mechanism, we found the phone slipped out of our hands every now and then, if we tried to open it one handed.


Adding to this rather mediocre first impression is the mess created by the large number of buttons, flaps, and sockets strewn around the phone’s sides. For the most part this is simply down to them being poorly integrated into the design, with no symmetry or aesthetic appeal to their placement.


However, a couple are also completely superfluous. A headphone jack, microUSB socket, microSD slot, volume rocker, and camera button are all essentials, or at least very useful, but the proprietary charging socket and screen lock switch certainly aren’t.

The proprietary charging socket is useful for the fact it charges quicker than over microUSB, but not so much that it’s really needed. Moreover, you can’t charge this phone at all over microUSB, which is downright ridiculous in this day and age. As for the screen lock switch, while it’s a hangover from previous similar Nokia phones that some people may be used to, on this model its functions are replicated by other buttons and software gestures – press the middle button on the front then swipe left on the screen to unlock the phone and press the call end button then select screen lock to lock it.

Surprisingly, considering how otherwise mediocre the design and build of this phone seems to be, its keyboard is actually very good. The keys have a really nice light action, so it’s easy to type at speed, and the layout, despite a few quirks, is generally easy to get on with. The addition of a directional pad (D-pad) is also very useful. The caveats are a lack of dedicated number keys, the bottom row of letters is shifted left, and the D-pad can sometimes interfere with the right-most keys. All told, though, it’s easily good enough to suffice. 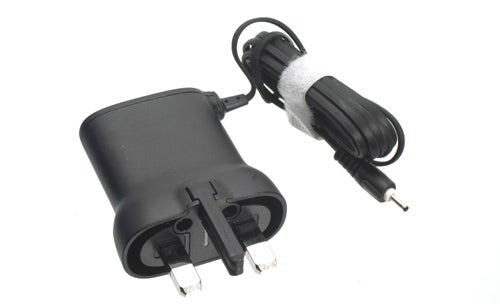 In the box you get Nokia’s rather funky new charger that has a pop up earth connector that when stowed makes it only half the height of a normal plug, which is very useful for travelling. You also get a very short USB to microUSB cable (for connecting to your PC) and a basic headset, which includes an inline remote with a single button for answering calls and a microphone, and a clip. It’s useful for making handsfree calls, but not much cop for listening to music.

Despite using resistive touch sensing the screen is reasonably responsive, so you can just about get by. It isn’t, however, a patch on the best screens out there, not least because it has no multitouch abilities like pinch-to-zoom.


Visually, the LCD screen fairs much better thanks to strong colours, good viewing angles, decent overall brightness, and ample contrast. It doesn’t have quite the impact that Samsung’s OLED screens and the iPhone 4’s LCD screen does, but it’s perfectly adequate. Its 3.2in size is also a good compromise between fitting enough on screen and keeping the phone a sensible size. That said, it is a little tall and narrow, which can make browsing the web and looking at large documents a tad tedious. At least the 360 x 640 resolution ensures everything likes nice and sharp. 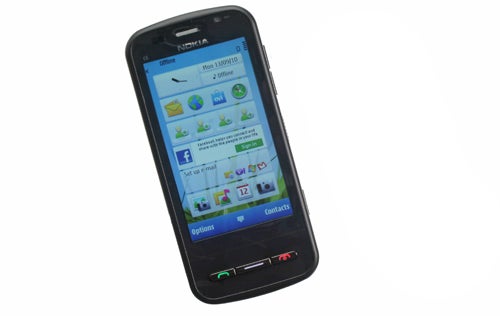 On the software side of things, we see an improved version of Symbian – specifically S60 rel 5 – which has a few additions that make it considerably easier to use than previous Symbian versions.


The most important addition is that of proper scrolling. On previous Symbian devices you had to either pinpoint the scroll bar and push and pull it up and down or place your finger on the centre of the screen and push the highlighted zone upwards to scroll upwards and downwards to scroll down – as though you were using arrow keys to move through the items in a list and as you get to the top the page scrolls up a bit. Yes, it really was that clunky. 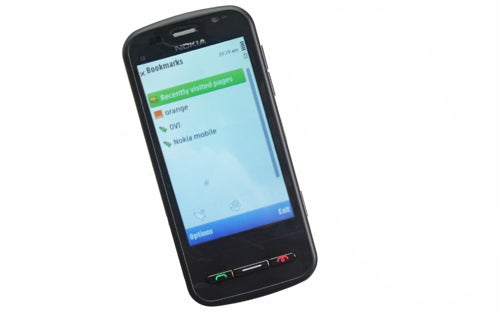 On this version, though, we finally have scrolling like that on just about every other mobile OS. Just place your finger anywhere onscreen and flick upwards to scroll upwards or downwards to go down. The scroll bar has also been kept, if you like that sort of thing.


The home screen allows you to add up to six widgets, which are things like an RSS feed, a Facebook feed, strips of shortcuts, and a stock ticker. You can choose to show or hide the widgets with a left or right swipe of a finger, but you can’t add multiple screens as you can on the iPhone and Android phones. 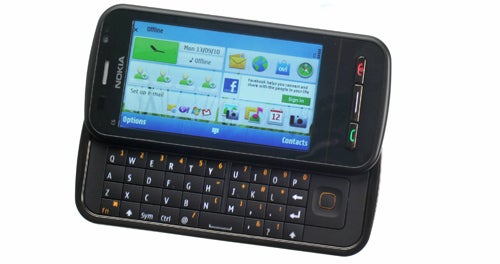 Visually the OS is very similar to previous versions. As such it’s still rather bland and blocky looking and still lacks any of the smooth transitions and animations that make iOS and WebOS in particular such a joy to use. For instance, menu items and programs just appear, often with a white screen flashing inbetween, rather than gliding onto the screen. There are a few improvements like the homescreen, which now has translucent icons allowing you to see the image behind, which can be a slide show. Some corners have also been rounded off and icons tweaked. For the most part, though, it still looks and feels like an OS from yesteryear.

In terms of features you aren’t left wanting for too much, though, or at least so it seems on the surface. There’s a web browser, email support, apps for Facebook, MySpace, and YouTube preinstalled as well as many more available through the OVI store. The free OVI maps and its very capable sat nav mode is also included, which is particularly good as it doesn’t need a data connection to download map data, making it much more practical when travelling abroad. 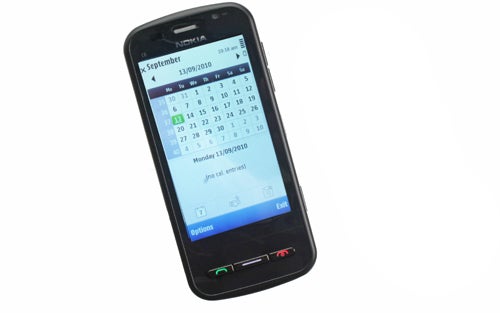 When it actually comes to using a lot of these features, though, they don’t live up to expectations.


Starting with contact management, there’s no social network integration, so adding and managing your contacts is a lengthy process. Likewise, messages are only presented in standard inbox and outbox format, rather than the back and forth conversation style that’s now so popular. 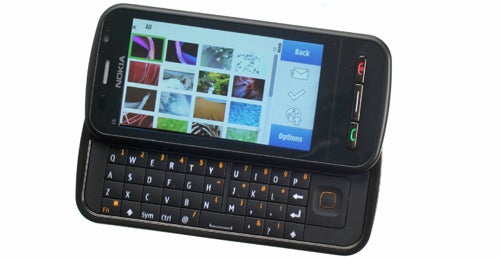 Moving onto more sophisticated fare, the web browser does a good job of displaying full size web pages but it lacks support for Adobe Flash and more importantly it feels a chore to scroll around the large pages, it doesn’t support tabbed browsing, and the zoom function is a pig to use. Likewise OVI maps, while eminently useful is slow and frustrating to use. Indeed the whole device can feel sluggish when trying to do anything that requires manipulating graphics more complicated than simple blocks of colour.


One area where Nokia handsets tend to do well is their cameras and for the most part it does so here as well. With five megapixels on offer, and both autofocus and an LED flash available, it can get a half decent shot in most casual situations, so long as you’re not moving around too much. Likewise video, which is shot at 640 x 480 is okay for the odd clip. Both are still a considerable way behind dedicated compact cameras and camcorders but okay for a phone. However, the camera application is rather slow so you’ll need to be patient when you do feel the need to record a moment for posterity. 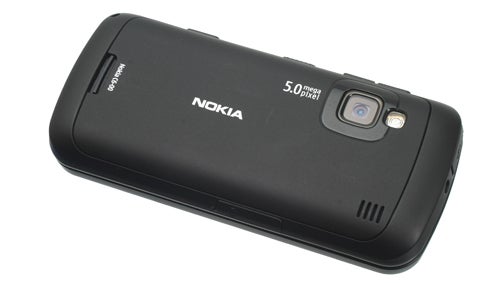 Call quality threw up no causes for concern and in fact the phone delivered rather a nice tone at both ends. The speaker phone is a bit weak, though, and there’s no active noise cancelling either. Battery life didn’t seem all that impressive with a couple of days being about the best we got, but we did have a number of onscreen widgets running so this could potentially be stretched by another day or so.


As for price, the C6 is pretty much on the money in terms of features. However, the resistive touchscreen in particular puts us off. That said, the keyboard is certainly among the better ones at this price point.


The C6 is a big improvement over previous mid-range side sliding phones from Nokia. The keyboard is very good, the software is much easier to use and aside from the screen, build quality seems decent. However, while it has made progress, the phone still lags behind the competition in many ways and there are few situations where we’d recommend it outright. 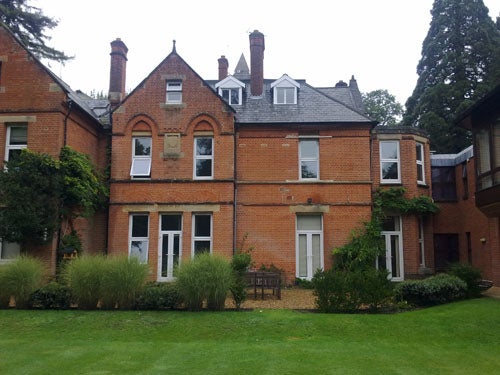 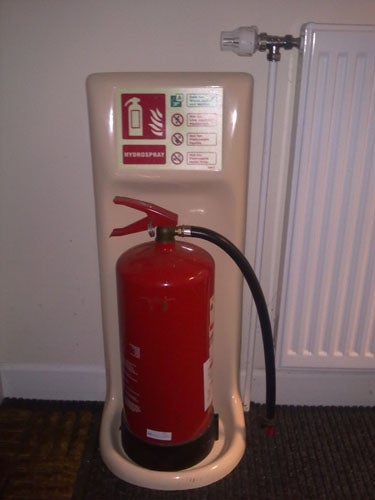 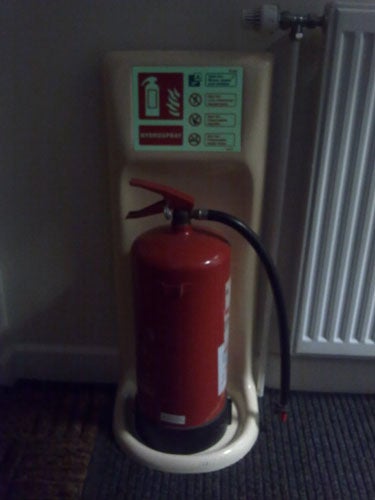