Nokia’s Asha range represents perhaps the last stand of traditional feature phones against the seemingly endless onslaught of low-cost Android smartphones. The Asha 309 is the successor to the Nokia Asha 306 that we reviewed in the middle of last year. Outwardly it looks very similar, although it comes with double the RAM of the original to help speed it up its Series 40 operating system a bit, and also sports a much more responsive capacitive touchscreen. You can buy it SIM free for around £100, but is it worth it or would potential buyers be better off just going down the budget Android route instead?

The Asha 309 is much dinkier than most other touchscreen phones on the market. It measures just 52mm wide, and the battery cover on the rear is nicely rounded so even if you’ve got smaller hands, it’s going to feel very comfortable to hold. However, there are big gaps between the screen and the top and bottom edges of the phone, so it’s not much shorter than a lot of budget Android phones that have roomier 3.5inch screens. 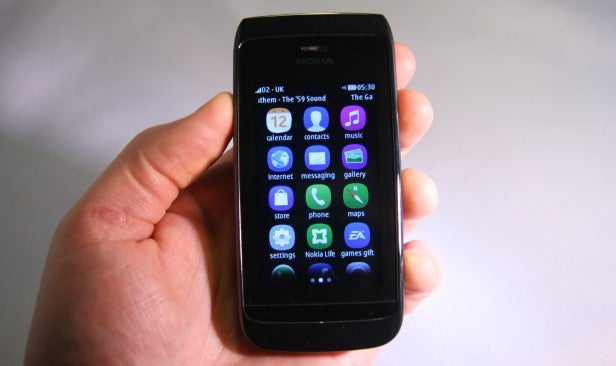 The bezel around the display has a traditional glossy black finish, but Nokia has used a dark chrome effect on the end-plates at the top and bottom of the phone. The Asha 309 does feel quite solid, but it also looks a bit plastiky and its design, although not unappealing, isn’t going to turn heads either.

The two call control buttons beneath the screen look like touch buttons, but actually turn out to be old fashioned push buttons that are just covered with a flexible membrane. Apart form these two buttons, the only other controls are the volume rocker switch and the lock button, both of which are located on the right-hand side. The lock button is positioned towards the bottom of the phone too, making it awkward to get at when you’re holding the handset in the normal way. At the top there’s a standard 3.5mm headphone jack and next to this is the microUSB port. Hidden behind a flap on the left-hand side you’ll find the microSD card slot, which is very welcome given the phone’s paltry amount of internal storage space.

The older Nokia Asha 306 used a resistive touchscreen display which wasn’t very responsive. Thankfully Nokia has made the wise decision to update the display for the Asha 309 by using a capacitive display that’s much zippier at responding to finger presses, helping to make the whole experience of using the phone a bit more immediate and less frustrating. 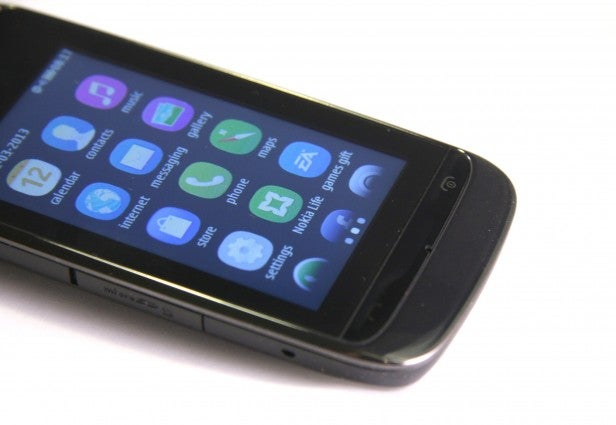 However, the display is still a weakness. The problem is not only that – at 3-inches – it’s small, but also that it has a very low resolution of just 240×400 pixels, whereas most of today’s budget Android phones have larger 3.2 or 3.5 inch screens with higher resolutions. As a result, web browsing on the Asha 309 just isn’t all that much fun; viewing webpages feels a bit like trying to scan a room by peering through a keyhole.

Viewing angles aren’t particularly wide either, so colours wash out when you tilt the phone up or down by too extreme an angle, although they’re not as bad as on some other budget handsets we’ve used. The display is reasonably bright too, and remains pretty readable outdoors under direct sunlight.