The Nokia 8.1 has many of the same shortcomings as the Nokia 7.1, but now with a higher price tag.

The Nokia brand has seen a massive resurgence of late. This has been helped by some big name phones like the Nokia 7 Plus from 2018 and the less great Nokia 7.1. Unfortunately, the Nokia 8.1 has more similarities to the latter and suffers from the same sluggish performance. It’s also more expensive.

Thankfully there are some positives, including a good-looking, modern design, a clean Android One experience and its attractive HDR display, that help to at least partially make up for these issues.

The new Nokia 8.1 lacks some of the flamboyance associated with Nokia in its pre-Android years. Back then, the company’s phones had an instantly recognisable design aesthetic that helped them to stand out.

That’s not to say there’s anything wrong with the Nokia 8.1’s design, it just feels a little more cookie-cutter. Like the Nokia 7.1, the Nokia 8.1 has a glass back that gives it a premium feel. Disappointingly, while the material would facilitate wireless charging, it’s not a feature here. Wrapped around the edges you’ll find a two-tone anodised frame that contrasts with your colour of choice. There are Blue/Silver, Steel/Copper, and Iron/Steel combinations. The Blue/Silver model I was sent sports a really deep blue, so appears almost black. It looks really classy. 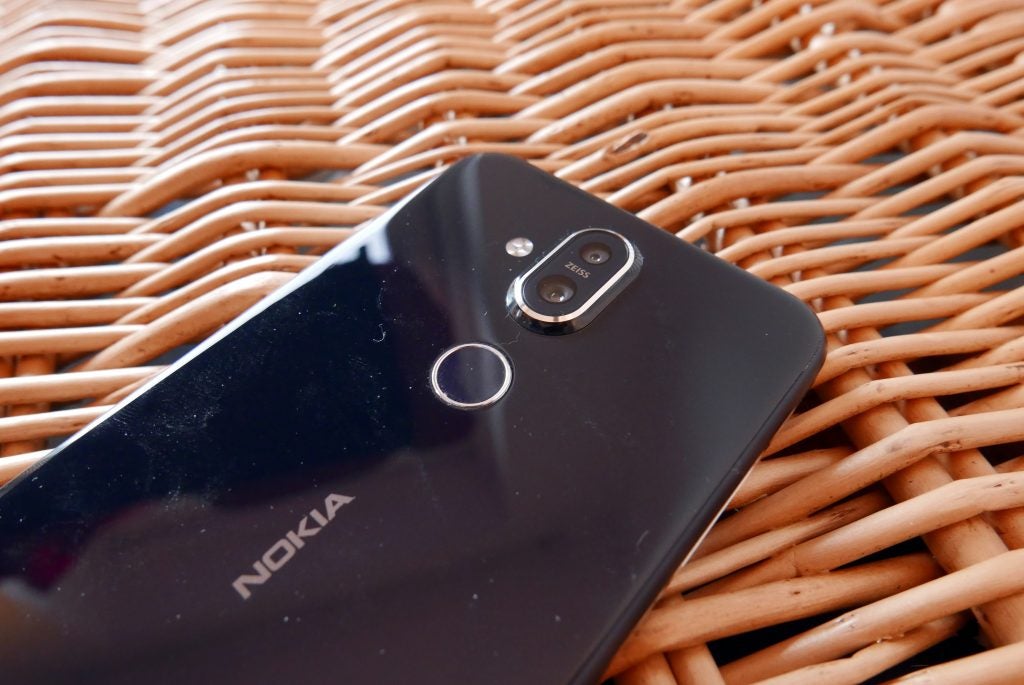 Flip the phone over and you’ll find a circular fingerprint sensor with a silver accent around its circumference. On top of that is a pair of camera lenses with a slight camera bump. Along the right edge, there’s a volume rocker and power button in the anodised frame. On the opposite side, there’s a SIM tray that can either take two SIMs or a single SIM and a microSD card for storage expansion. Along the bottom is a USB-C charging port and there’s a trusty 3.5mm headphone jack up top. 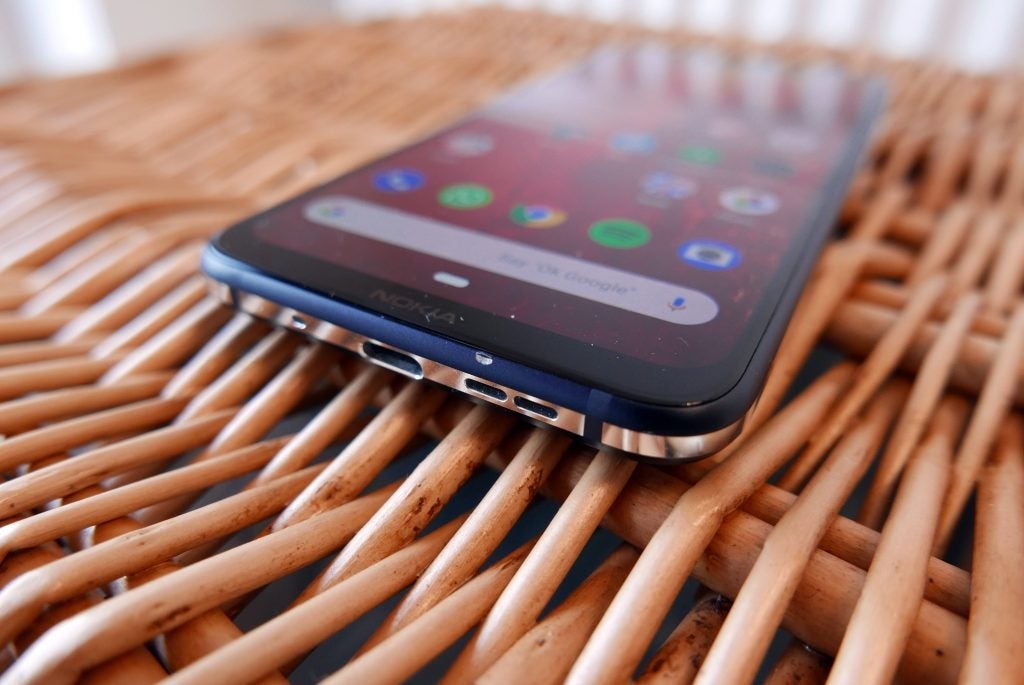 While the Nokia 8.1 feels premium, it’s not a terribly robust phone. My review sample already arrived with a slight chip to the frame and I added a second to the bottom chin (sorry, Nokia PR). The glass construction is relatively slippery and the phone took a tumble out of my pocket while seated in the cinema because of this slick quality. That meant it fell just about 30cm to a relatively soft surface, but that was still enough to take a decent chip out of the metal running the bottom edge. Not really what I would expect from a phone of this price.

The most eye-catching element of the Nokia 8.1 is its screen. Like the Nokia 7.1, it’s FHD+ but it’s gotten a fraction larger at 6.1 inches (up from 5.85-inch). That extra screen size is again helped in part by the notch. It’s a pretty wide notch, especially compared to last year’s Nokia 7.1, meaning there’s not a lot of screen to the left and right where your notifications are displayed. It means you’ve got space for at best two notification icons, which isn’t much. The notification bar seems to always be black now, which helps mask the size of the notch. 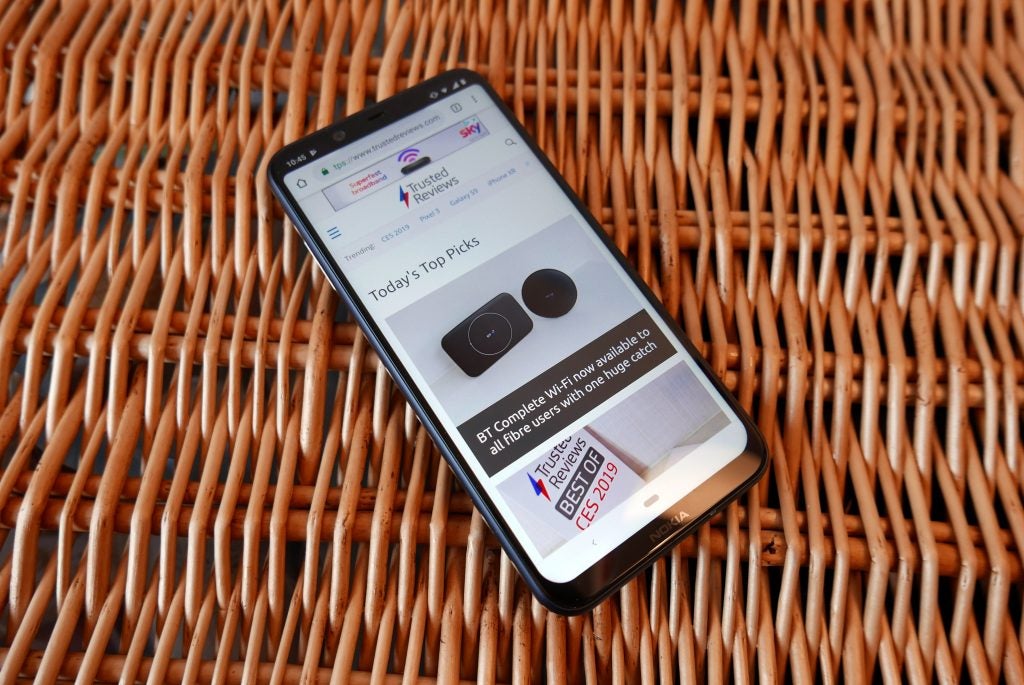 The FHD+ resolution helps the screen appear crisp and sharp, much like the Nokia 7.1. Again, the real bonus is HDR10 support, something you still don’t typically see at this price point. It’s still not officially Mobile HDR Premium certified, however. 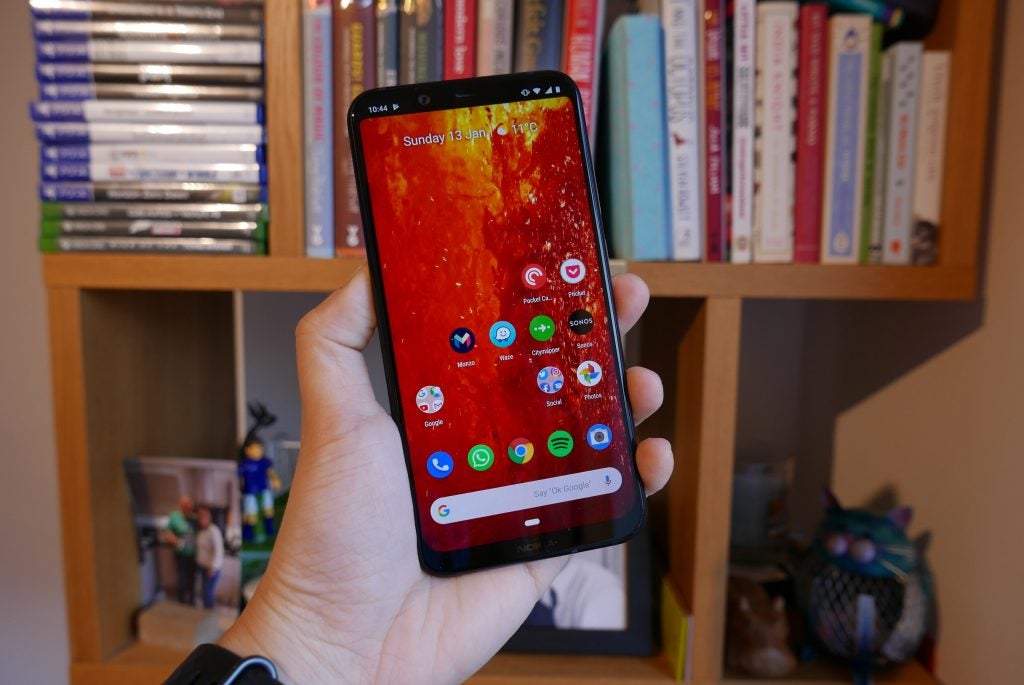 Another frustration, especially when watching video, is just how aggressive the adaptive brightness can be. It’s supposed to learn your preferences over time but after nearly two weeks of use, it would still jump around in brightness even when the ambient lighting conditions hadn’t changed.

There are some welcome software tweaks to the display, however. The Night Light mode can automatically kick in to reduce blue light when you want to give your eyes a rest before bed and there’s an additional Wind Down mode that turns content on the display grayscale.

The Nokia 8.1’s use of Android One software is a key selling point. It means a purer Android experience, closer in line with what you’d see from one of Google’s own Pixel devices. It’s a refreshingly light user experience for anyone put off by the heavy Android skinning and software customisation used by the likes of Huawei and Samsung. There’s also no pre-installed bloatware. 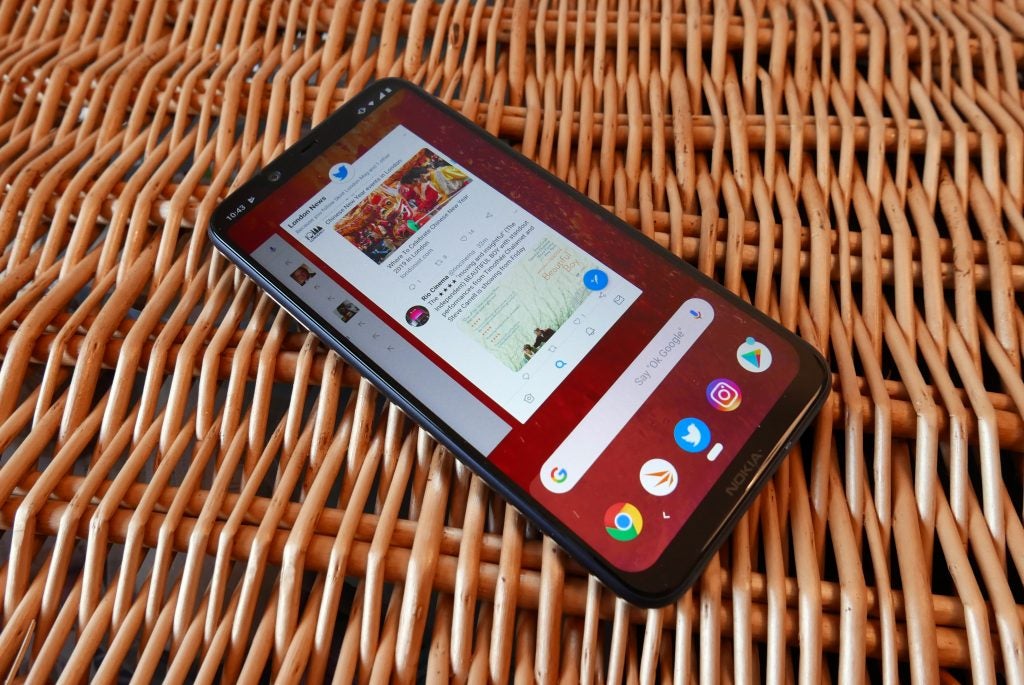 The Android One build used is based on the latest Android 9.0, which means it has the Digital Wellbeing additions that let you limit your app usage. If you’re a little too addicted to refreshing Twitter and Instagram, you can ration yourself to a set amount each day, after which you get locked out.

Android One also means there’s a greater emphasis on gestures for navigation. The three Home, Back and Overview buttons you might be familiar with from previous Android versions are now gone. From the home screen, there’s just a single pill-shaped icon, which acts as the Home button. Swiping this up a short distance brings up the Overview menu that shows your recent apps, whereas a longer swipe up brings up the apps drawer. You can also swipe across the bottom from left to right to bring up an overview of your opened apps, and then scroll horizontally between them.

The Nokia 8.1 is powered by an upgraded Qualcomm Snapdragon 710 processor alongside 4GB of RAM. Its predecessor used the older Snapdragon 635. Unsurprisingly, the Nokia 8.1 outshines its predecessor in the Geekbench 4 multi-score test, scoring 5838 to the Nokia 7.1’s 4551 points. It’s worth noting that the Honor 10 for around the same money has them all beat considerably with a score of 6514. However, like the Nokia 7.1, these synthetic test scores don’t really reflect what it’s like to use the Nokia 8.1 day-to-day.

Unfortunately, it proves to be a rather sluggish experience and one that you wouldn’t expect to see from a phone costing £379.99. Basic actions like bringing up the keyboard can cause the phone to stutter, making for a jarring and frustrating user experience. Touch responsiveness when swiping around apps can also have lag, which led me to think momentarily that an app had completely crashed, only for it to spring back to life a split-second later. 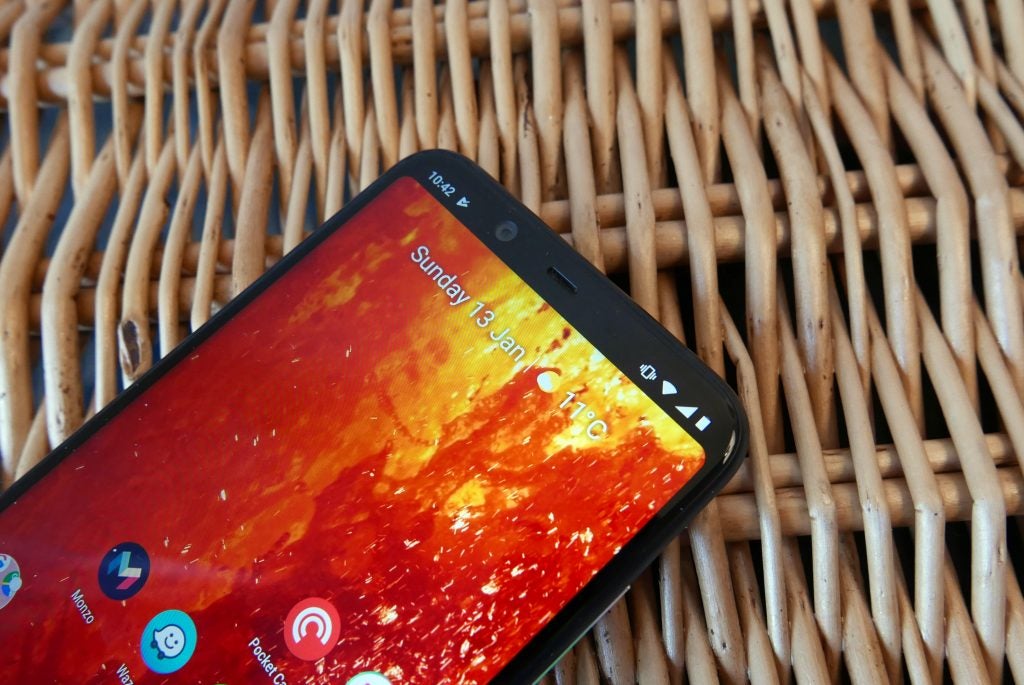 If we were expecting near-flawless everyday performance for the Nokia 7.1’s £299, we’re even more disappointed with the sluggish performance here at £379.

The Nokia 8.1’s gaming performance was a pleasant surprise considering its shortcomings in regular use. It didn’t have any problems whatsoever running ARK: Survival on medium graphics and maximum resolution, doling out a smooth frame rate.

There’s 64GB of storage built-in and you can add up to a further 400GB through a microSD slot if you don’t decide to install a second SIM.

The phone’s call and speaker performance seemed good as well, with no issues in call quality. There’s only a single mono speaker but it outputs a decent amount of volume and your hands don’t tend to obscure it when playing games or watching films, although headphones are always your best bet.

The Nokia 8.1 has a pair of rear cameras. Its primary camera has a 12-megapixel sensor, whereas the second camera has a higher 13-megapixel sensor. The lenses are from Zeiss, a well-known name in the world of photography also used by the likes of Sony. Like the Nokia 7.1, the second sensor is used as a ‘depth sensor’ for background blur effects. 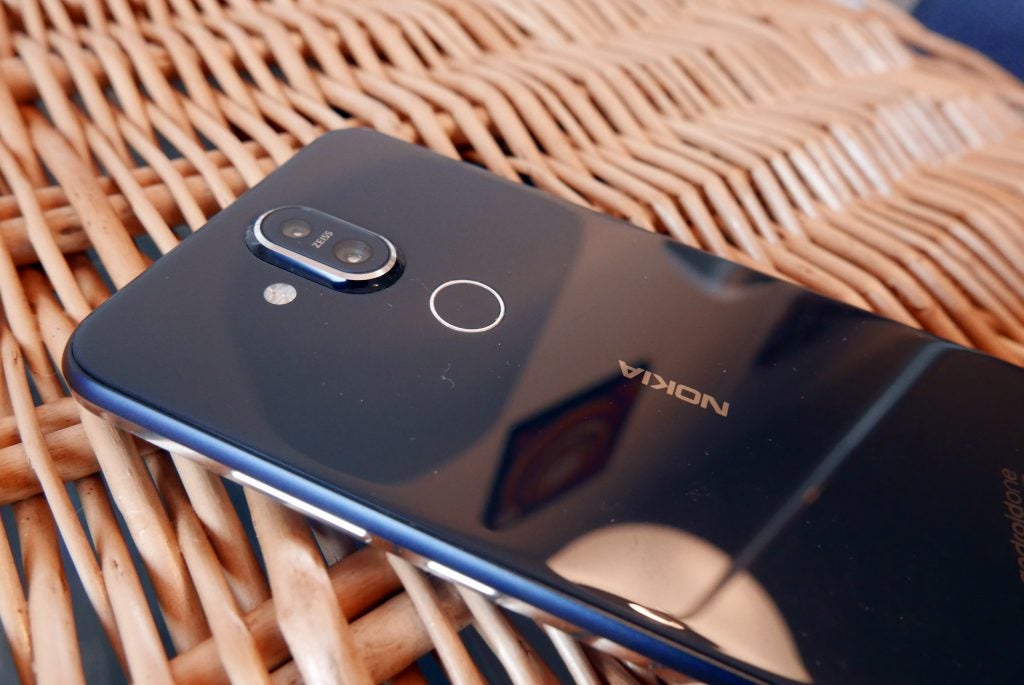 You can adjust the level of bokeh while taking a shot in the Live Bokeh mode, which can result in some good shots with good subject separation from the background. 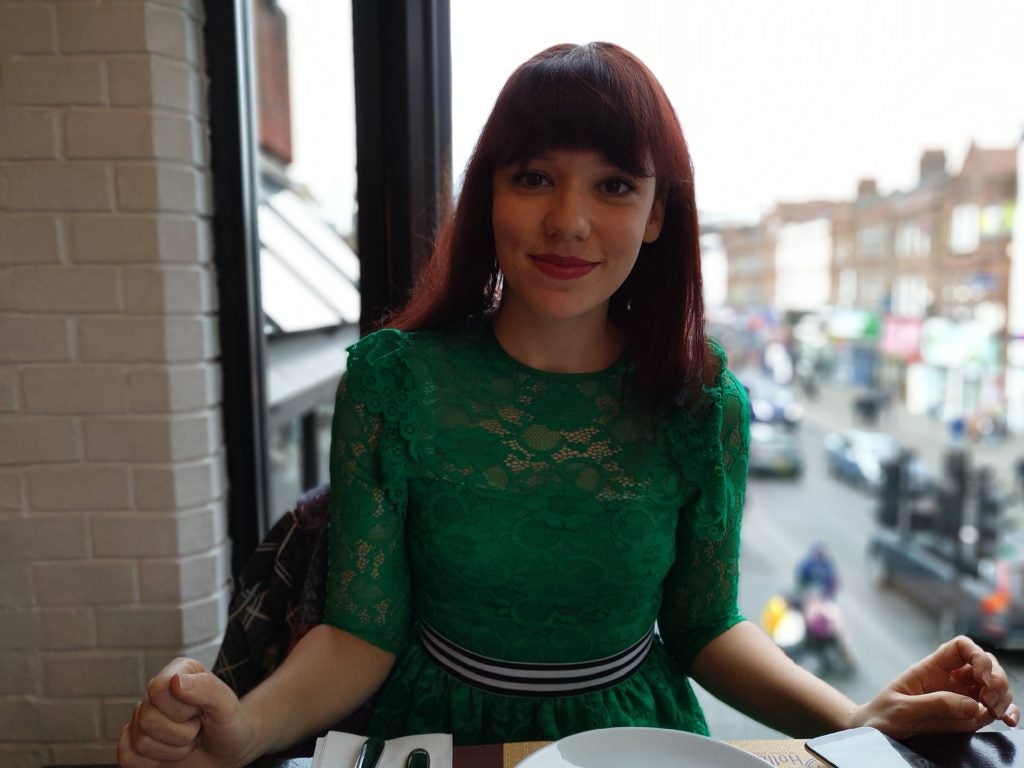 There are limitations to software bokeh. Look at the right arm and the subject’s hair and you can see where the software gets it wrong.

The other issue with the Live Bokeh mode is that you lose HDR support, which means the above image is a little washed out as the camera has exposed for the brighter background. Below is a photo taken in the standard Photo mode with Auto HDR turned on. 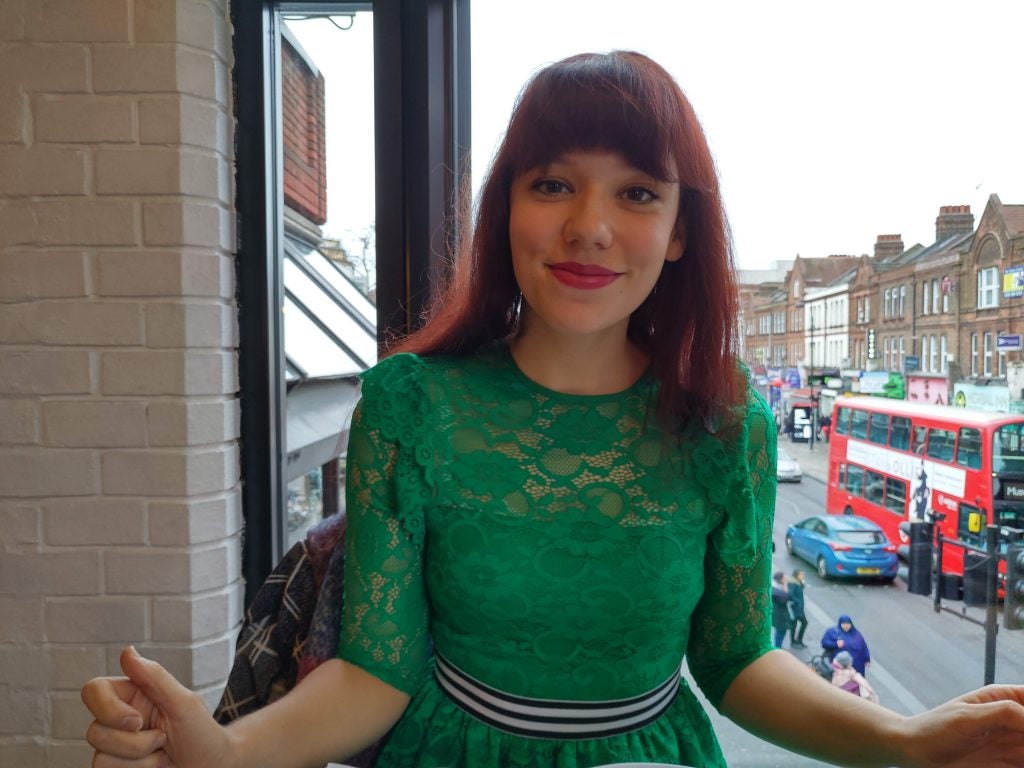 The Auto HDR has resulted in much better colours and exposure at the cost of bokeh.

The camera also has other ‘AI’ capabilities, using image recognition to detect the scene you’re shooting. This then adapts the settings to take a more flattering photo of your subject, whether that be a plate of food, a pet or a night scene. 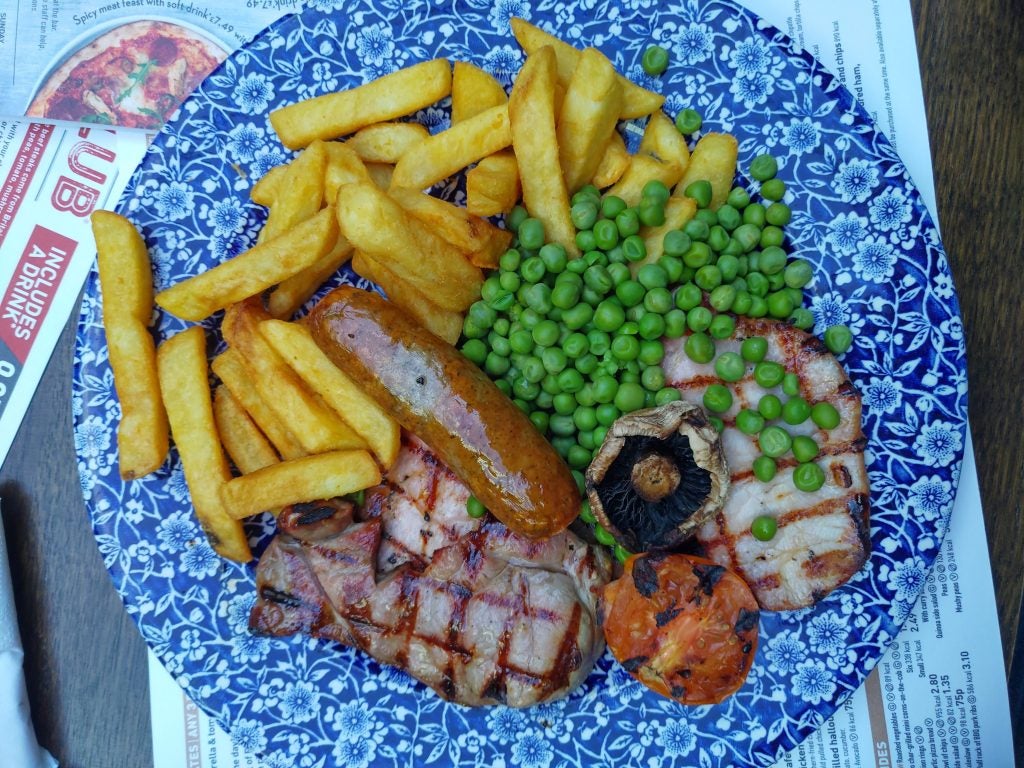 In good lighting, shots are sharp with punchy colours. 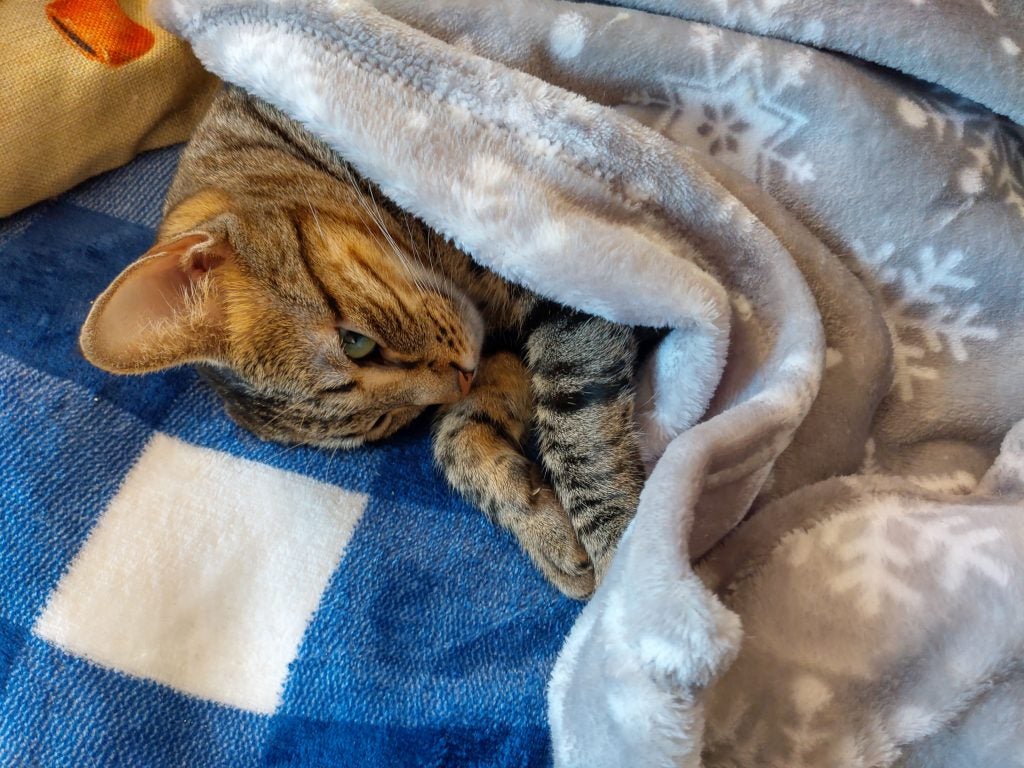 The camera can capture a lot of detail in the right conditions.

Low-light photography is where expensive flagship phones really separate from the mid-range pack, and that’s evident here. Shots are acceptable but they don’t hold up to closer scrutiny. When zooming in there’s a noticeable loss of sharpness and an increase in noise. 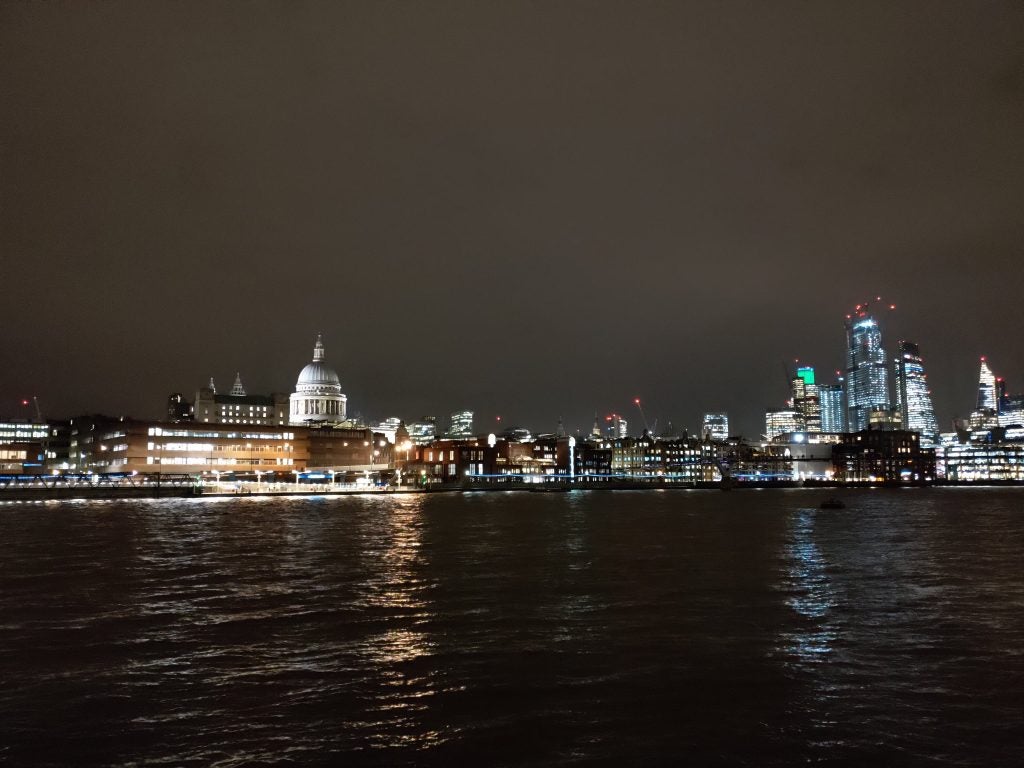 The image stabilisation does a decent job of maintaining sharpness under tricky conditions. 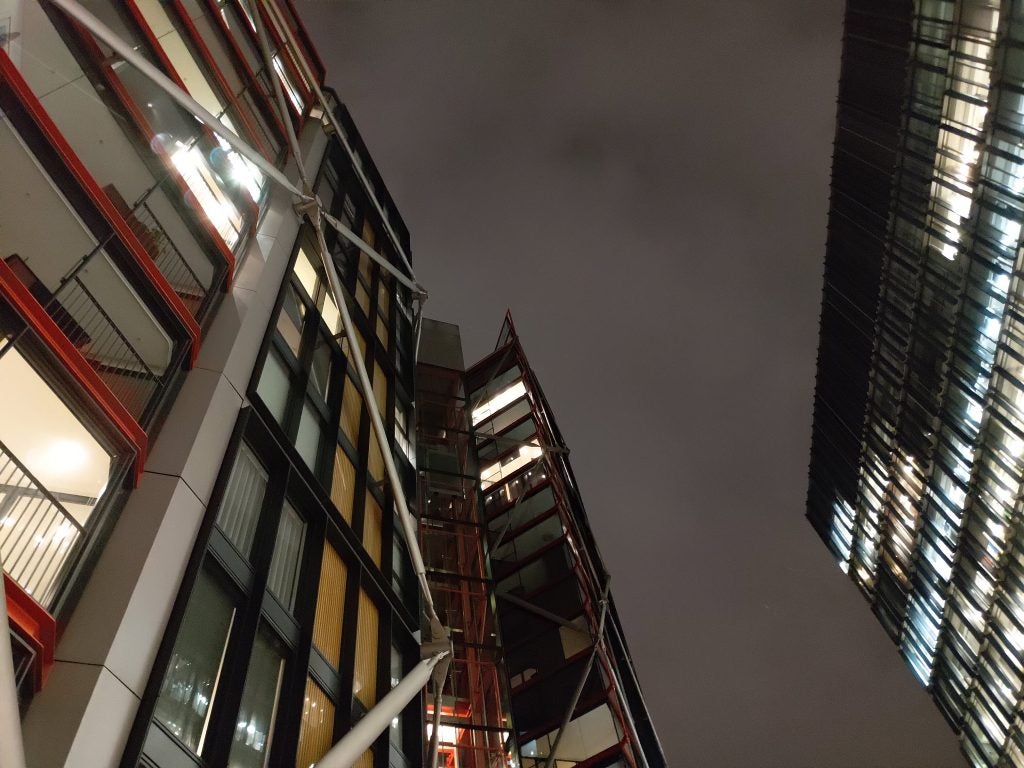 You can see a lot of noise/grain in the shadow detail. 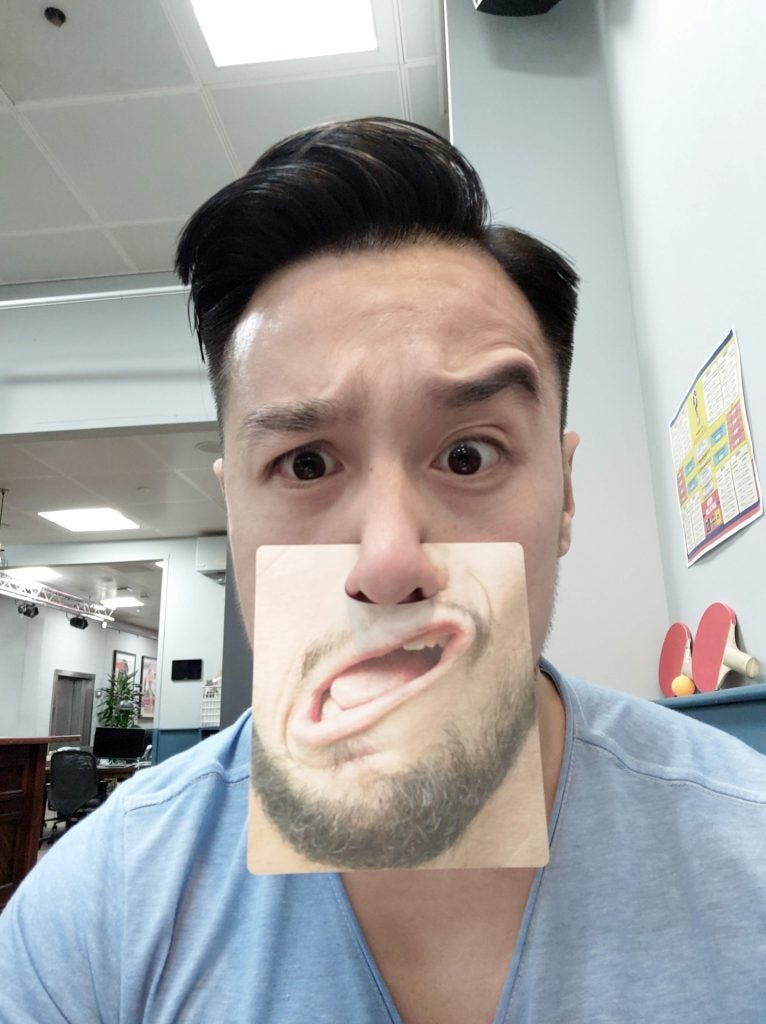 On the front of the Nokia 8.1 there’s a 20-megapixel selfie camera, which is a respectable performer. There are also Dual and P-I-P (picture-in-picture) modes that let you capture a photo using both the front and rear sensors at the same time. It’s a gimmick I suspect people won’t use more than once.

While the image quality of the camera is generally good for the money, it’s also prone to some seriously sluggish performance. It can suffer from shutter lag when trying to snap a shot, meaning you miss a shot or think the phone’s captured it only to end up having snapped a blurred mess as you go to put the phone down. It also takes a noticeable amount of time to process shots using the Live Bokeh mode, especially when it’s trying to work its magic in low light. It’s a shame when the results are otherwise respectable.

Where the Nokia 8.1 has had a decent upgrade over the 7.1 is in battery capacity. It’s now a 3500mAh cell, which is a big step up on the 3060mAh battery seen in the Nokia 7.1. One of our biggest complaints with the Nokia 7.1 was its inability to get through a full day of use. Thankfully, that’s not the case here.

With my regular usage pattern, which meant lots of Twitter and Instagram browsing, streaming podcasts and Spotify, and copious amounts of WhatsApp messages, I was able to take the Nokia 8.1 off charge at 8AM and still have up to 45% remaining by 11PM. That’s very good.

An hour of Netflix streaming took the battery down 7%, which is also impressive. There’s also fast charging support and the use of USB-C is very welcome. In the end, battery life is one of the Nokia 8.1’s strong points. 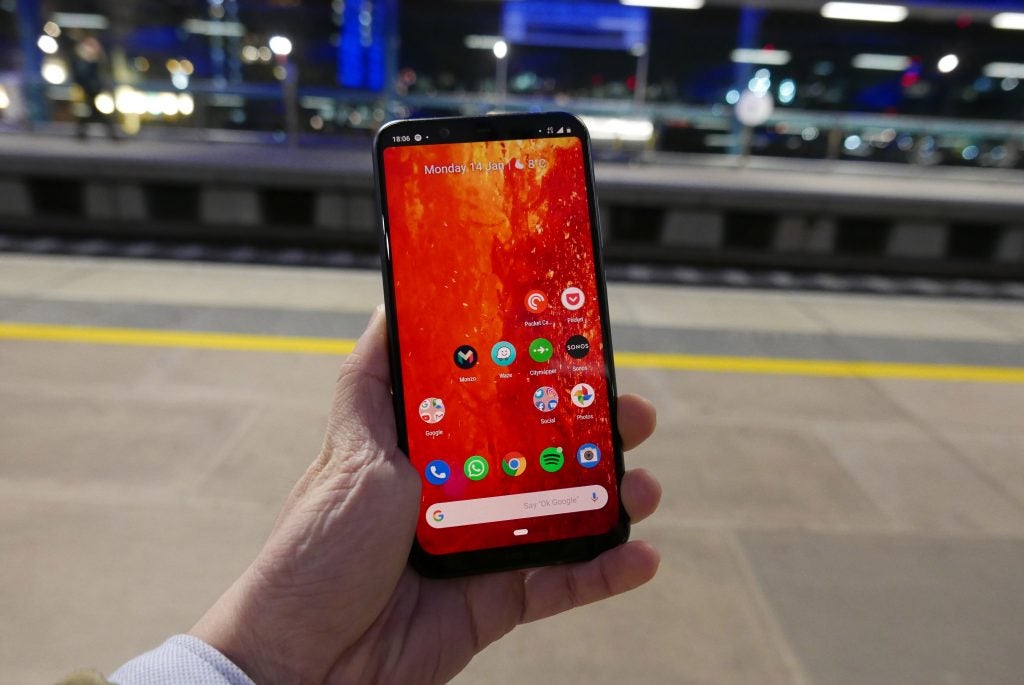 The main selling points for the Nokia 8.1 are its attractive screen and Android One experience. But in my view, these aren’t enough to justify its £379 price point. For that money, it’s encroaching on the likes of the Honor 10, which has a better camera and performance. For less money, there’s also the Samsung Galaxy A7. The sluggish performance of the Nokia 8.1 really detracts from the overall experience, which ultimately loses it some points up against some stiff competition at this price.

A disappointing variation on the formula used by the Nokia 7.1 that makes many of the same mistakes but at a higher price point.