What is the Nokia 8?

The Nokia 8 is a flagship phone through and through, with major components and features that are ostensibly a match for the best that Samsung, HTC and LG can muster. Despite this, it comes with a £500 price tag that’s slightly lower than most of its 2017 rivals – apart from the £450 OnePlus 5T, which, in many ways, is the most direct comparison here.

But simple spec-box ticking was never enough for Nokia during its feature phone pomp, and it isn’t enough to win you market share in the jam-packed Android flagship field. You need a distinctive angle and a little sprinkling of design magic, and I’m not sure the Nokia 8 has quite enough of either.

Nokia was renowned for its distinctive hardware design and impeccable build quality way before Apple arrived on the scene. This is the reason it’s in this, more than any other area, that the Nokia 8 will probably be scrutinised above rivals.

The Nokia 8 stands up pretty well for the most part. There’s nothing to fault its design for other than a lack of wow factor.

It’s a pretty typical slab of aluminium and glass, with curved edges and subtle plastic antennas on the top and bottom edges. There’s a little raised aluminium rim around its dual-camera, and you’ll find a recessed, non-clicky home button/fingerprint sensor below the display; this is flanked by capacitive back and app-switching buttons. 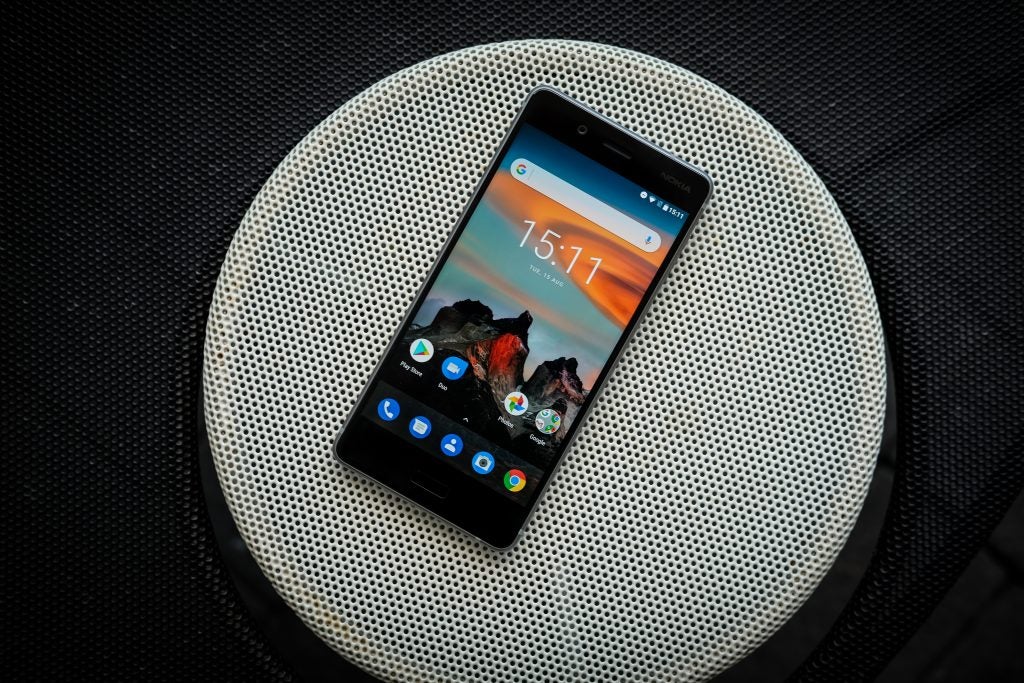 I moved to the Nokia 8 straight from using a OnePlus 5, and it was notable how fundamentally similar the two phones are. In fact, you could cut that last paragraph and paste it into a review of the other phone – although, for my money, the OnePlus 5 is slightly better-looking.

That’s not to say that Nokia and hardware partner HMD has pinched any of its design ideas from OnePlus. Indeed, there are numerous Android handsets on the market that fit this description, and it’s a shame that the Nokia doesn’t really do anything to distinguish itself given the brand’s heritage.

Still, there’s no faulting the phone’s feel in the hand. However, I fear that it’s will feel rather dated rather quickly with the accelerating shift towards bezel-free designs – but for now, it’s thoroughly pleasant to look at and hold in a late-2015 kind of a way.

The Nokia 8 has a certain heft to it at 7.9mm thick and 160g, but you wouldn’t call it an excessively large phone. I’d have preferred it to be a tad smaller given the phone’s relatively small display, but it’s fine.

It should also be noted that I had the more understated matte blue model to test. There’s a shiny copper option that would almost certainly make a much bigger visual impact, if that’s what you’re after.

You don’t get the same level of water- or dust-proofing here as you do with many other flagship phones these days, but an IP54 rating is enough to ensure the Nokia 8 at least offers dust- and splash-resistance. That’s one design feature it has over the OnePlus 5. 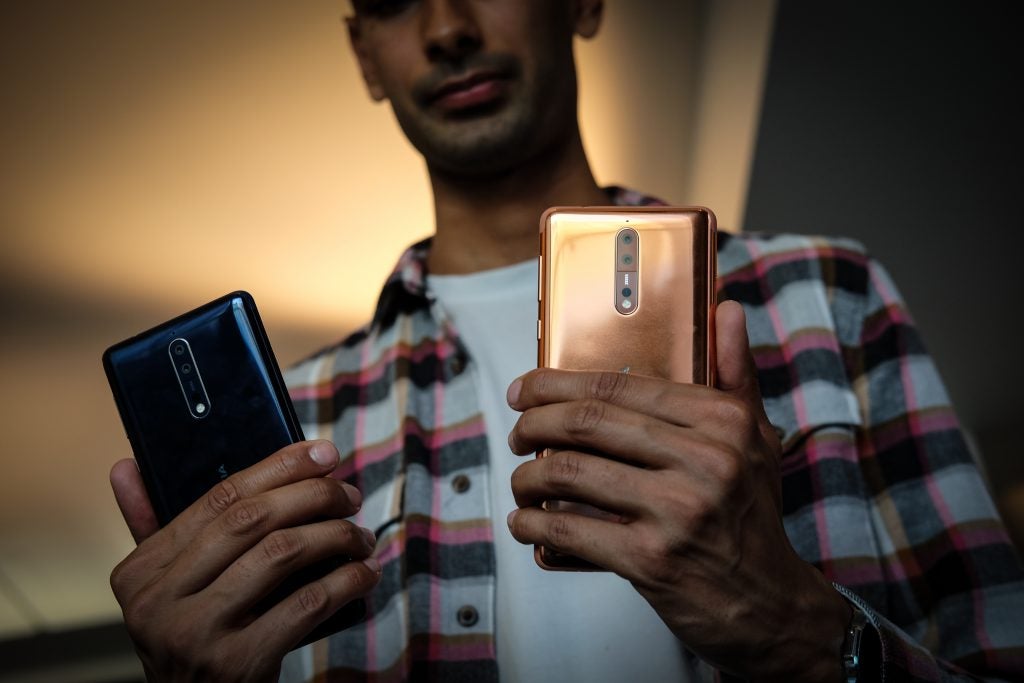 The power and volume keys are situated close together along the right-hand edge, and so would have benefitted from a little textural differentiation – especially since they’re angled away from your face. On several occasions, usually when playing a game or watching a video, I found myself putting the phone to sleep when I wanted to turn down the volume.

But my main complaint regarding the controls lies with the Nokia 8’s fingerprint sensor. It’s plenty fast enough when you line up your finger properly, but I found it to be a little too small compared to the likes of the sensors on the OnePlus 5 and the iPhone 7. It led to a few too many misreads as I failed to align my thumb properly – although you’ll probably adjust to this over a longer period of use.

Nokia has taken the somewhat unusual step of fitting the Nokia 8 with a smaller-than-typical display. At 5.3 inches, you still wouldn’t call it a compact phone, but 5.5 inches is the more typical size – and that’s only going to increase as edge-to-edge screens become the norm.

I didn’t have an issue with this unusual size at all, though. It’s still too big to use single-handed, but it shows off media and web content just fine.

It does make you question whether the choice of a Quad-HD resolution was strictly necessary. Again, I came to the Nokia 8 from the OnePlus 5, which has a larger (5.5-inch) and much less pixel-dense (1080p) display, yet I wouldn’t say that there was a noticeable step up in visual fidelity.

There remains a question over QHD’s true smartphone worth for anything other than VR applications. Even the Samsung Galaxy S8’s huge – and brilliant – 5.8-inch screen defaults to 1080p.

Perhaps more meaningfully, Nokia has taken the decision to opt for LCD over OLED – and this display is a perfectly cool, crisp and bright (to the tune of 700 nits) example. But Nokia used to be known for its smart use of OLED in its Windows Phone days, particularly with its Glance readout, which is present here.

Related: When will my phone get Android 8? The Glance screen is a dimly lit cluster of basic information such as the time, date, battery status and number of notifications that appears whenever you move the phone.

This used to make sense with Nokia’s OLED-equipped phones, since only the text would light up, making for a discrete heads-up summary tool. Here, however, the whole screen lights up a little. This can be particularly annoying at night, since the Glance screen remains on whilst charging.

There are absolutely no complaints with the Nokia 8’s performance or specs. It comes equipped with Qualcomm’s Snapdragon 835 chip, which is the go-to processor for 2017 flagship phones.

This is a super-fast yet energy-efficient SoC that will handle anything you throw at it with consummate ease, and which doesn’t suffer for the extra pixels of a QHD display. Backed by 4GB of RAM, and lacking a hefty custom skin, everything moves fluidly on the Nokia 8.

Of course, virtually every other flagship Android phone of 2017 has an identical spec, so this is really table stakes at this point. But the point remains, the Nokia 8 is a smooth operator. 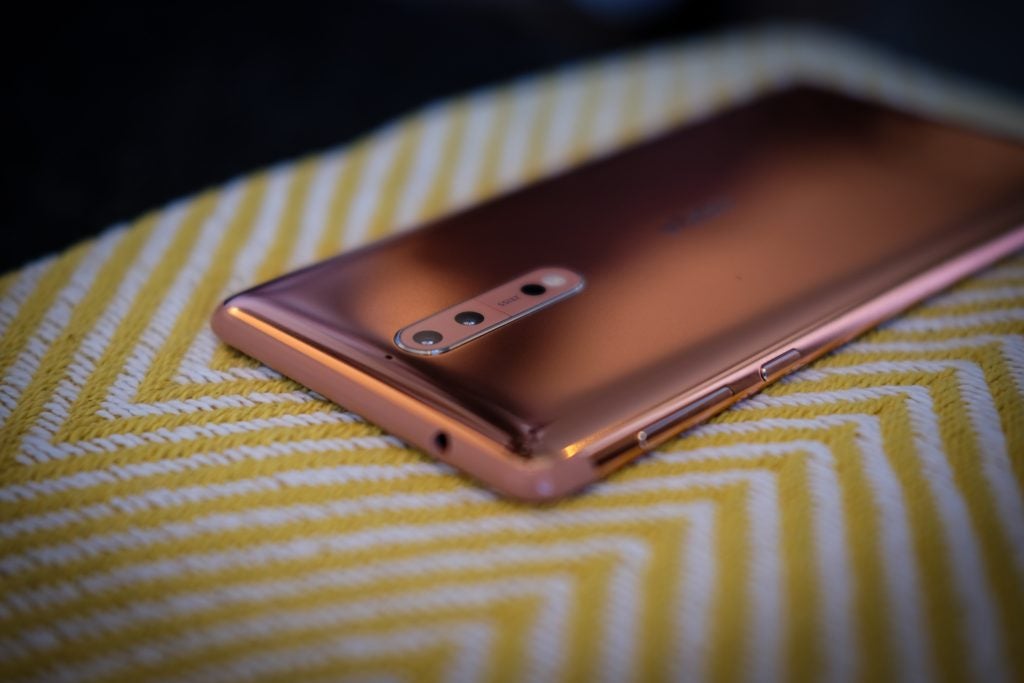 Recent 3D games such as Gear.Club and Guns of Boom ran flat out during my test period, as did fast-paced 2D fare such as ReRunners; on a separate but related note, the downward-facing speaker is a little weedy and easy to cover up in such situations.

The phone doesn’t become too hot when such high-end tasks are running, either. Besides the energy-efficient Snapdragon 835 CPU, this is likely down to Nokia’s inclusion of a copper cooling pipe with a graphite shield, which apparently dissipates system heat across the phone’s body.

In terms of benchmarking, an average Geekbench 4 score of 6578 pitches the Nokia 8 right up there in between the OnePlus 5 (6719) and the Sony Xperia XZ Premium (6492). It’s fast alright.