It was in March that I reviewed the 7900 Prism from Nokia. That had followed a review last year of the 7500 Prism. Both were similar in design with a diamond-cut approach to the fascia and a gem-like take on screen themes.


The diamond cut fascia idea has recently reasserted itself in the unlikely shape of HTC’s Touch Diamond and Nokia has resurrected the Prism range with the 7900 Crystal Prism.


The 7900 Crystal Prism is one of those mobiles that falls into the more style than substance category. Which is fine if you like the style and don’t mind the lack of substance. 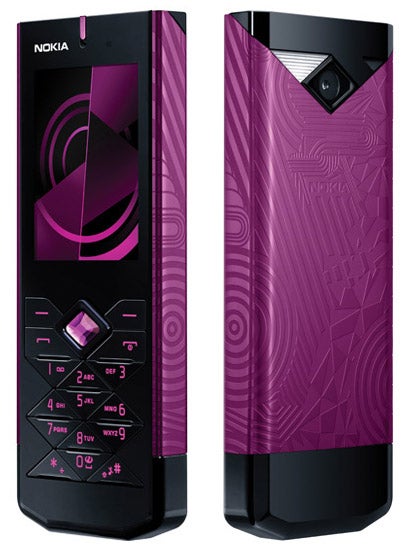 In this case the style comes in many guises. First off there is the diamond cut patterning of the phone. This runs to shaping on the front fascia which puts all the number keys into triangular buttons that between them form a sort of diamond pattern. The Call, End and softmenu keys aren’t triangles or diamonds, but aren’t rectangular either.


Then there is the styling of the back panel. A pink horror set against the shiny blackness that comprises much of the rest of the fascia, this piece of aluminium has an etched pattern on it, produced with the help of creative designer Frédérique Daubal. Nokia has ruined whatever subtlety the design might have had by stamping its name in there.


Next, check out the navigation button on the front of the handset. Its select button is a crystal. The crystal is pink and I am not sure what exactly it is, but it doesn’t look too classy to me.

Next up we have software themes. Now, Nokia refers to these as the ‘organic, living wallpaper that match your mood for a unique look’, (sic – I quote the Nokia website). What it boils down to is several themes that involve shard-like designs and ‘light effects’.


The light effects let you choose between 49 colours for the backlight to the number pad (which is entirely dark when it is not in use) and a matching light bar which sits on the top edge of the screen to left and right of the mains power jack and pulses gently. It seems to pulse constantly and will pulse with more vigour to deliver alerts of various types. It is not hugely exciting. 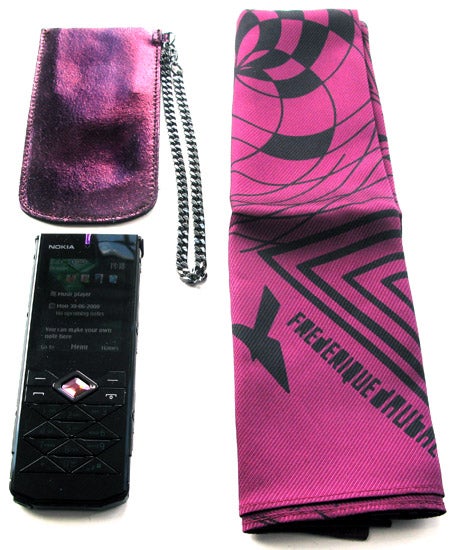 Before I leave this aspect of the phone completely, I’ll just let you know that it comes with a lurid purple shiny carrying pouch complete with chunky chain, and a bandana. Go figure.


So much for the style, then, which may or may not take your fancy. The substance places the Nokia 7900 Crystal Prism into the mid-range. This is a quad-band handset with a slightly taller than average candybar design. At 112mm tall it feels slightly lanky in the hand and pocket, though its 45mm of width and 11.3mm of thickness are much more like the norm. It weighs 101g. 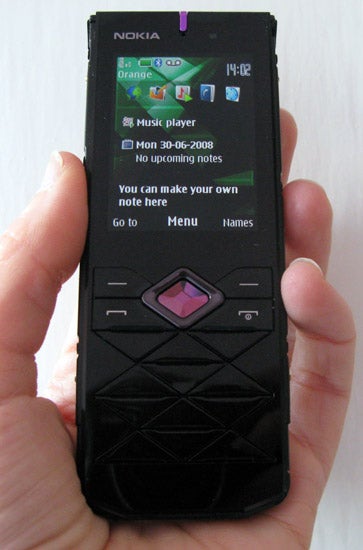 The main screen is an OLED with offers 16 million colours and 240 x 320 pixels in an area measuring 2-inches across the diagonal. It is unproblematic to read indoors, but outside, and particularly in bright sunlight, it suffers. I often needed to shade it with a hand to read incoming texts or frame camera photos, for example.


The phone runs S40, and as such is a way behind the capability of the top-end S60 that is found in many other Nokia handsets. S40 is not a write-off by any means, but it doesn’t have the panache of its bigger, bolder, brasher sibling.

One of the downsides of this mobile is that there’s no way of expanding on the built in memory. OK, you get 1GB built in, but really, in these days of 8GB microSD cards, the lack of support feels like a serious omission.


This is also a shame since battery life for music playback was quite good. Nokia suggests you’ll get up to nine hours of music playback. I copied a few tracks onto the internal memory via Bluetooth then set the phone to play non-stop, which it happily, and very loudly, did for eight and a half hours. Not quite nine hours, then, but pretty good just the same. 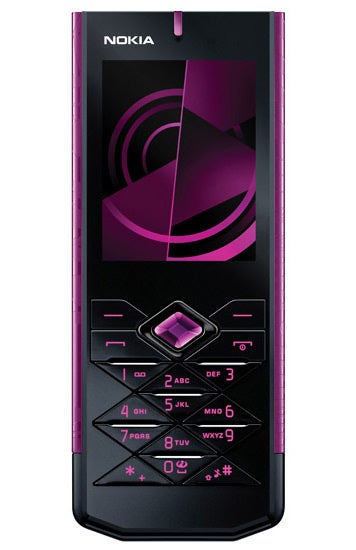 The built in camera shoots stills at a maximum resolution of just 2-megapixels and it has a flash but not much else by way of fancy features. On test performance was quite mixed. Indoors it struggled a little, but sometimes delivered quite well. The coloured dish, photographed under normal household lighting shows good colour accuracy, as do the pink flowers shot outside, though their detailing is flaky.


The chair suffers from a lack of uniformity in its white tones, but definition is reasonable for a 2-megapixel lens. The ”Sempervivum” was a real test. The phone lacks a macro mode and this shot was taken very close in. The flower stem is just a few cm tall. Focus is not uniform but the shot is passable if all you want to do is show it to your mates then delete it.


With a fairly standard S40 software array the Nokia 7900 Crystal Prism has to be all about look and feel. It doesn’t do a lot for me on that front. A bundled bandana, even one produced by a well known designer, is too far away from what a mobile phone is all about to draw me in. The camera does quite well, though, and the battery life impresses. 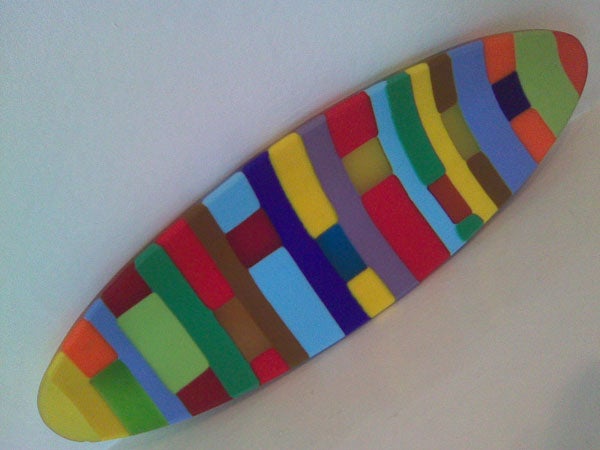 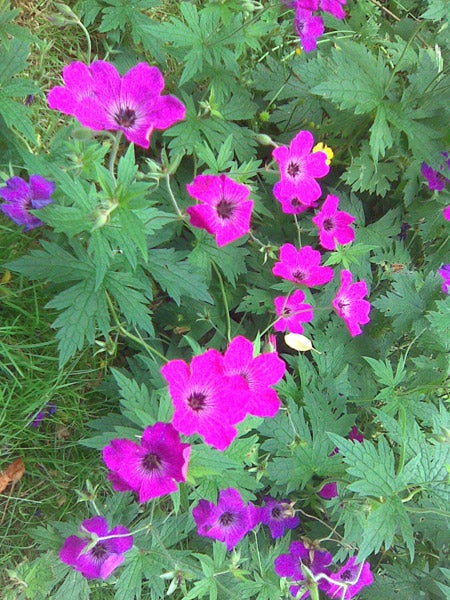 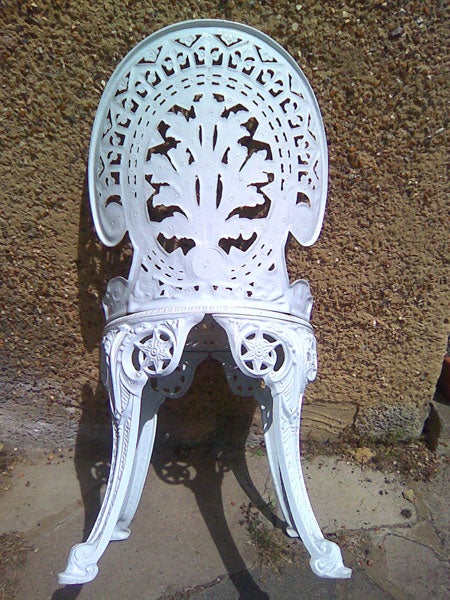 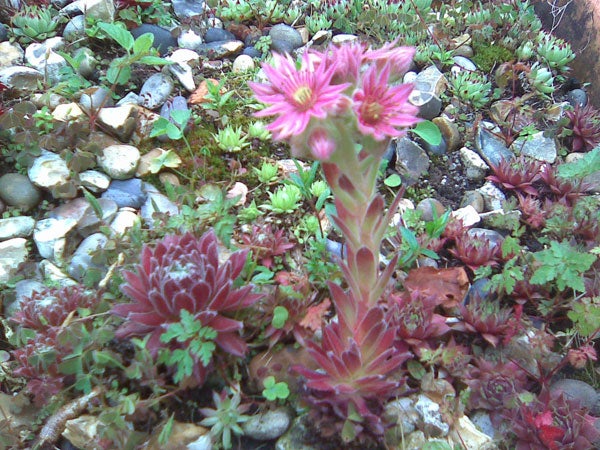