On paper, the Nokia 7.1 looks like one of the best phones at the price, but it's let down by poor battery life and general performance.

The Nokia 7.1 is the first notched phone from Nokia to come to the UK. And unlike some alternatives, it isn’t particularly expensive.

You’ll pay £299 for a Nokia 7.1, which these days is considered the upper-end of “affordable”. Rivals at the price include the Moto One, the Moto G6 and the Honor 8X or Honor Play.

Is the Nokia 7.1 the best of that bunch? It’s one of the smartest-looking options, for sure, but there are some problems. It costs more, and although there are some levelled-up specs to compensate, day-to-day performance and battery life just aren’t as good as you’d hope. 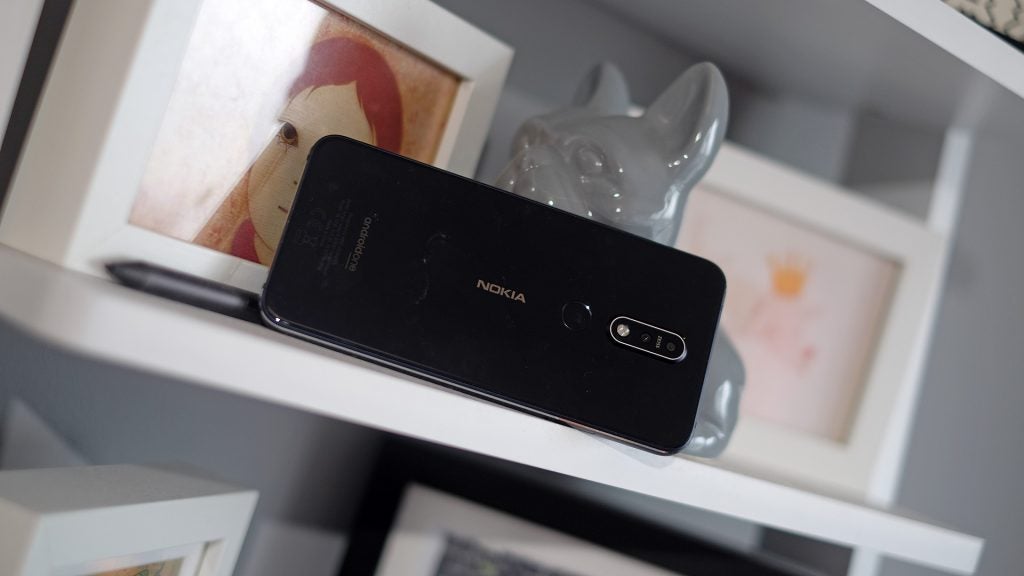 The Nokia 7.1 has two interesting characteristics. It’s among the first wave of affordable phones with a notch, and runs Android One.

This is a stock version of Android that guarantees a standard Android look and three years of security updates, but doesn’t rule out the odd enhancement or two.

The Nokia 7.1’s physical presence is just as important, though. It’s a fairly petite phone among Androids, similar in stature to the iPhone XS, but it looks and feels expensive and compromise-free. 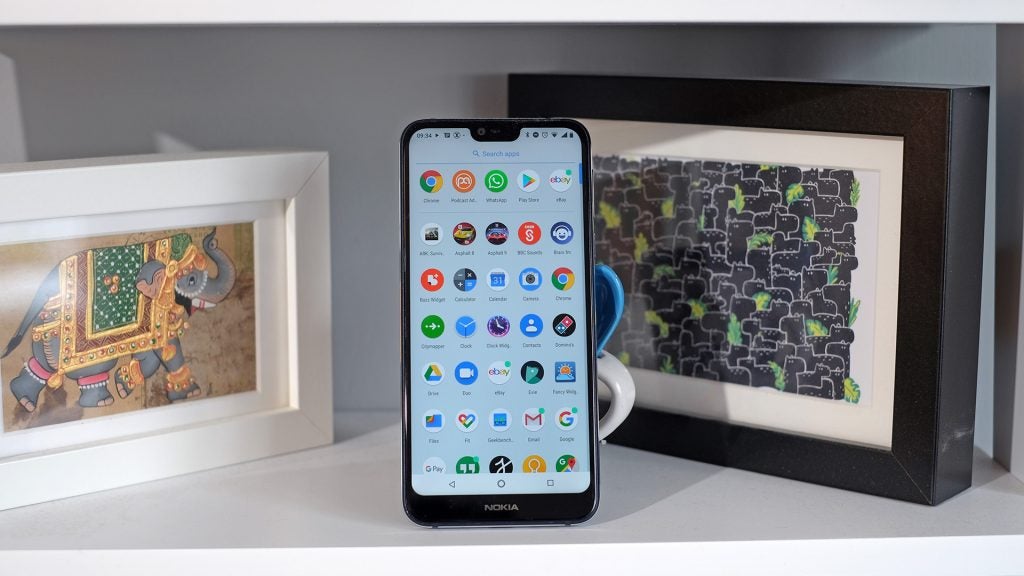 Nokia hasn’t opted for any Honor-like eye-catching finishes, instead relying on the combination of metal and glass, and bright silver highlights cut into the bevelled sides. The Nokia 7.1 looks very like a Motorola Moto One with a hint of flashiness. This design works.

All the included extras, and those missing, are precisely those expected at the price. There’s a fingerprint scanner on the device’s rear, but no official water-resistance. You get a headphone jack, but the speaker is a single driver on the bottom. It’s loud and clear, only lacking the more powerful bass of some higher-end phones. 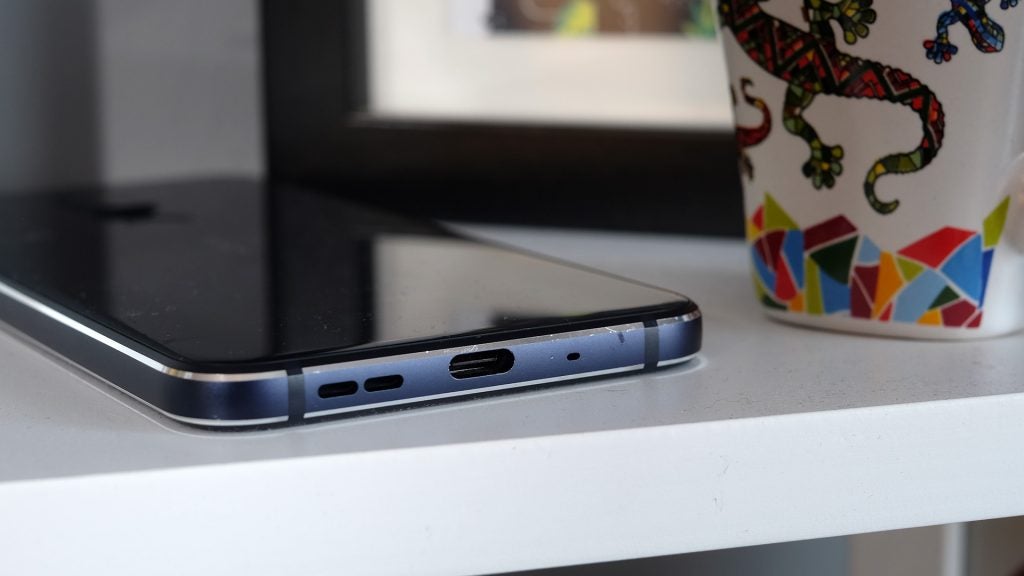 The Nokia 7.1 has 32GB storage, and there’s room for an SD card in the SIM tray. While the hardware isn’t technically dynamic, it seems fancier than its price might suggest.

This is one of the smaller Android phones on the market. It’s petite enough to appeal to a mass audience, but not so small it seems made to stand out. 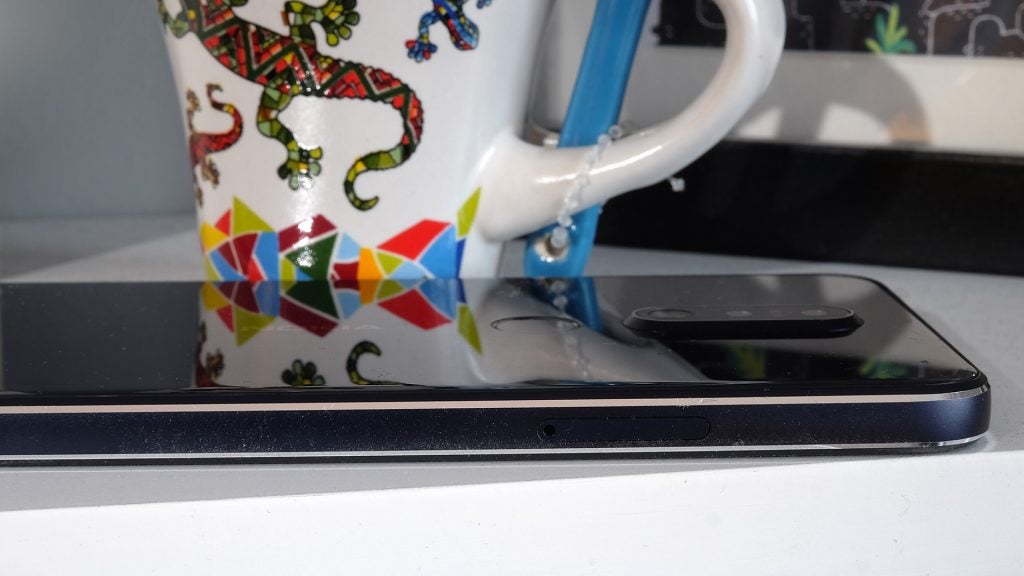 The screen is 5.85 inches across, but this number is pumped up by the notch. It’s narrower than the 5.2-inch Nokia 5, making it very easy to handle and use.

The panel is the Nokia 7.1’s most important selling point over its rival, the Motorola Moto One. It’a a Full HD “plus” screen, proving to be much sharper than the Moto’s 720p-grade display.

Sure enough, it’s one of the Nokia 7.1’s best features. Sharp, bright and with attractive iPhone XR-like lines – this is a good screen for the price. 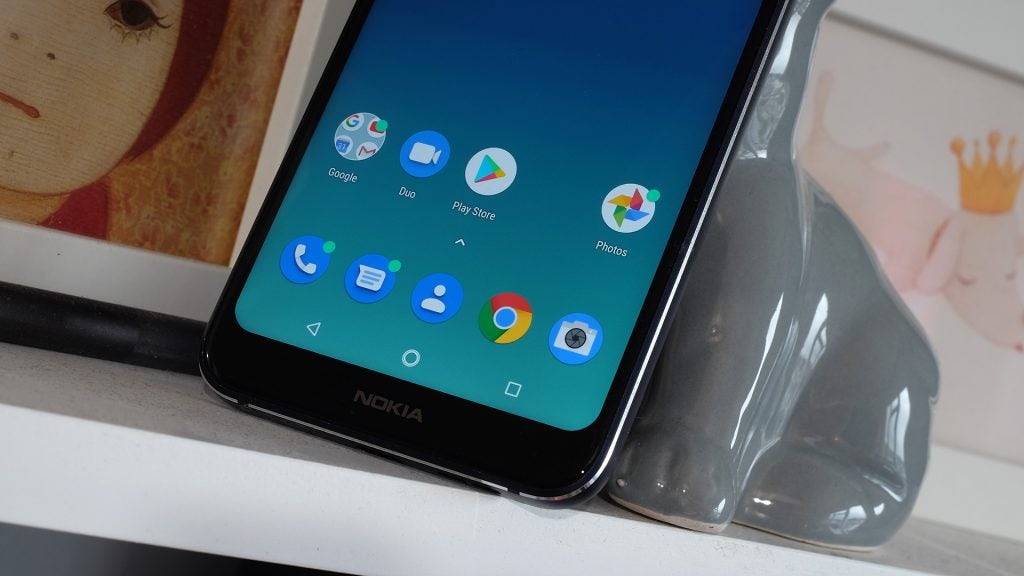 You get no control over the colour calibration, and tones are sensibly a little more vibrant than sRGB. However, it does support HDR10, making it one of the cheapest HDR phones, alongside the Honor 10.

Neither is Mobile HDR Premium certified, though. This is where a phone is tested to ensure it offers a level of brightness and contrast that makes HDR worthwhile, and you don’t tend to get that with a standard mid-range IPS LCD panel such as this. 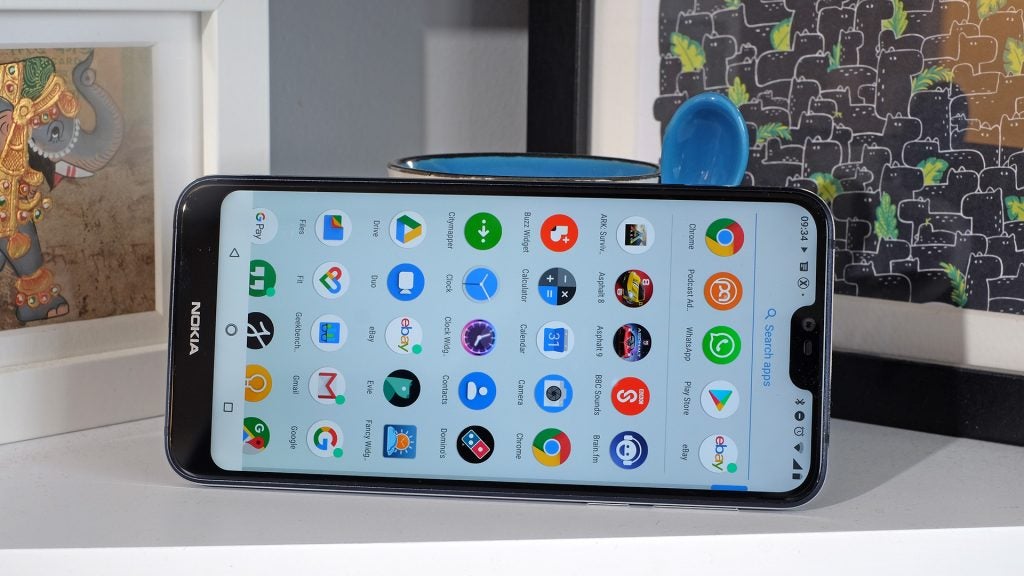 But let’s get real: this is a mid-price phone that does not have a truly huge screen. HDR or not, this probably isn’t the phone to buy if you spend hours a day watching Netflix on your mobile. The larger Honor 8X is a better choice in that case, even without HDR.

Nokia has added an HDR10 upscaled mode that boosts standard video, photos and games. It works, too – although offers an unrealistic portrayal of the Nokia 7.1’s own photos, which is a shame. 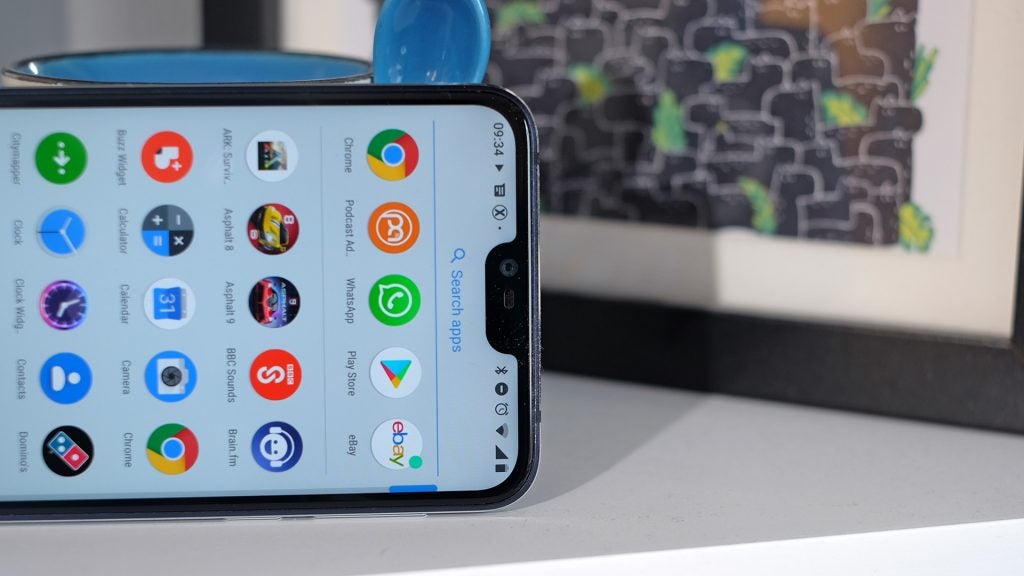 There’s little to say about the notch other than that it’s fairly narrow, leaving plenty of room for notification icons. Note that unlike Honor’s affordable notch phones, you can’t hide it.

The Nokia 7.1 runs Android 8.1.0 and Android One. This is a Google programme that gets you close to the experience of pure Android, with almost no preinstalled apps, and very few alterations to the software.

It also guarantees three years’ worth of security updates. As you can tell from the version of Android that the Nokia 7.1 runs, though, it doesn’t also guarantee that software updates will arrive as quickly as they do on the Pixel phones. Android 9.0 is available, but this phone still runs version 8.1.0.

As such, there are no app usage controls to help you try to limit your social media use.

That’s the most obvious omission, though; the Nokia 7.1 software looks as clean and inviting as you’d hope from an Android One device. Nokia is easily the most important Android One partner, having made a host of phones in the programme, including the Nokia 7 Plus, Nokia 8 Sirocco and Nokia 6.

Android One significantly limits what you can customise outside of changing the wallpaper or using a launcher app. However, unlike the Motorola Moto One, you can change the shape of icons. The default circles are arguably the most attractive – but others give the phone a slightly different visual personality.

The Nokia 7.1 has a Snapdragon 636 processor. This offers eight Kryo 260 cores clocked at 1.8GHz, and is technically more powerful than the Snapdragon 625 used in the Moto One.

Sure enough, in Geekbench 4 the Nokia 7.1 scores 4551 points, to the Moto’s roughly 4300 points. There isn’t much in it, but the Nokia has a newer, marginally faster CPU.

However, you wouldn’t guess this from day-to-day use. The phone is frequently a little slow, with little moments of lag in all types of apps. Sometimes, the keyboard takes a beat to appear. Elements in apps often load a little less quickly than expected. 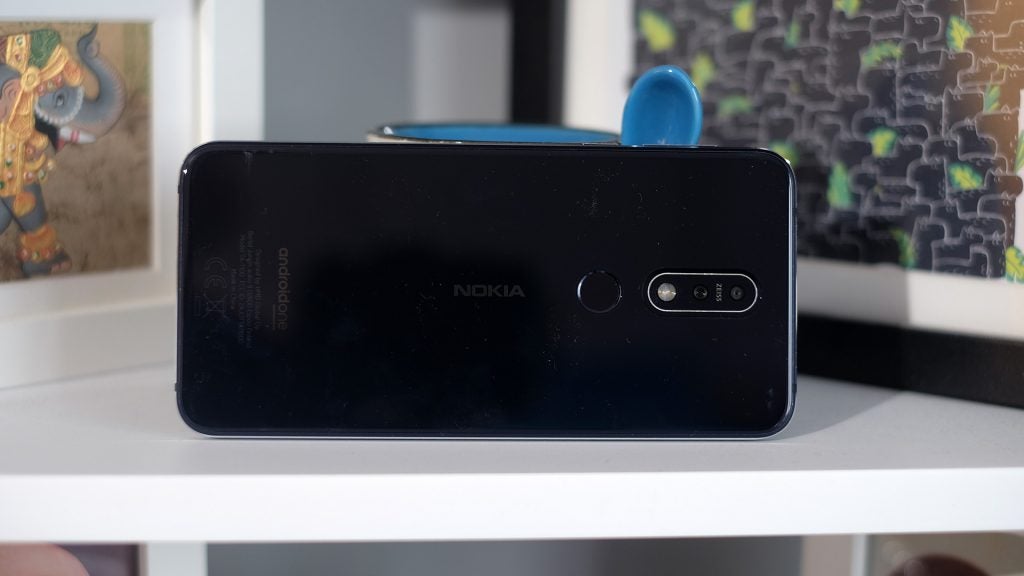 Crucially, this is more noticeable than in the Nokia 7.1’s two main rivals, the Moto One and Honor 8X. Neither of those phones is quite as fast as the top models, but the disparity is clearer here.

It’s a big problem, since while this phone’s £299 price is fairly accessible, at that price you have a right to expect near-flawless performance.

The big question is why is the Nokia 7.1 a little slow? With more than a dozen models on the market using the same CPU – including the slightly more expensive BlackBerry Key2 LE – the 3GB RAM should be sufficient to keep Android happy. There’s no leaden custom interface to blame.

Flawed memory management is one possible reason – but for now the cause remains a mystery, and it stops the Nokia 7.1 from earning a higher review score. Cheaper rivals are faster.

Note that this is only evident in general use. Play a game and the Nokia 7.1 runs just fine, or at least consistent with the CPU’s abilities. Asphalt 8 runs very well. ARK: Survival does too, although you’re limited to low-end graphics. However, on first loading it, the phone crashed and had to be restarted.

There are a few gremlins in the Nokia 7.1 machine.

The Nokia 7.1 has two cameras on its rear. One is a 12-megapixel sensor, the other a 5-megapixel one. This second camera is only used as a “depth” sensor, for adding background blur to images. Unlike the great Nokia 7 Plus, there’s no zoom. 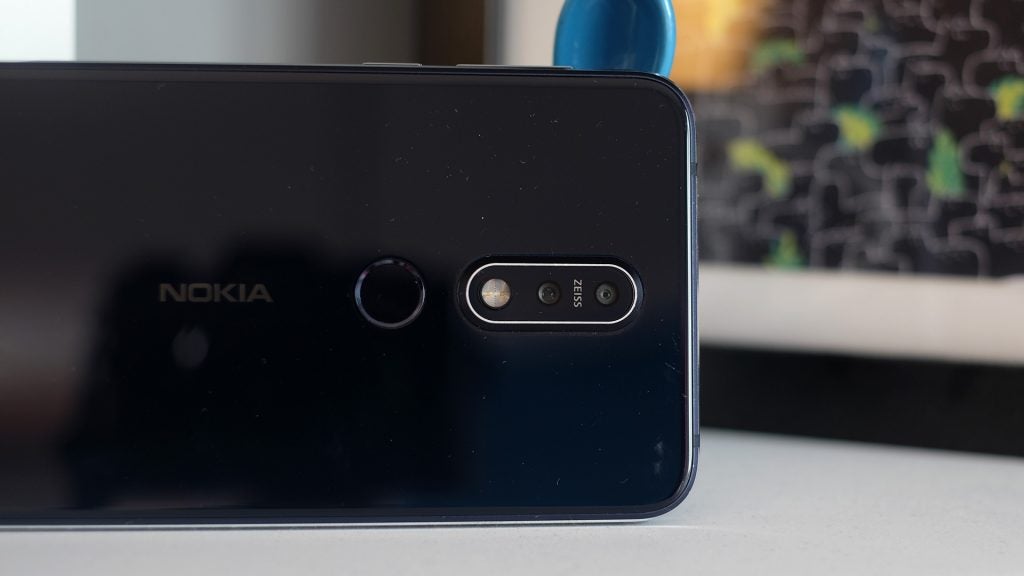 Beware, too, that the Nokia 7.1’s Auto HDR10 mode “upscales” movies, photos and other images to look like high dynamic range content. The resulting images therefore look far more vibrant on the phone than they would on a laptop screen.

This also means you can get the same effect with post processing, but those images may not be as hot as they at first appear.

However, they appear to beat images taken with the Moto One. Dynamic range is fairly good, detail solid enough and, while you can tell the sensor isn’t truly high-end or stabilised, night photos are respectable too. 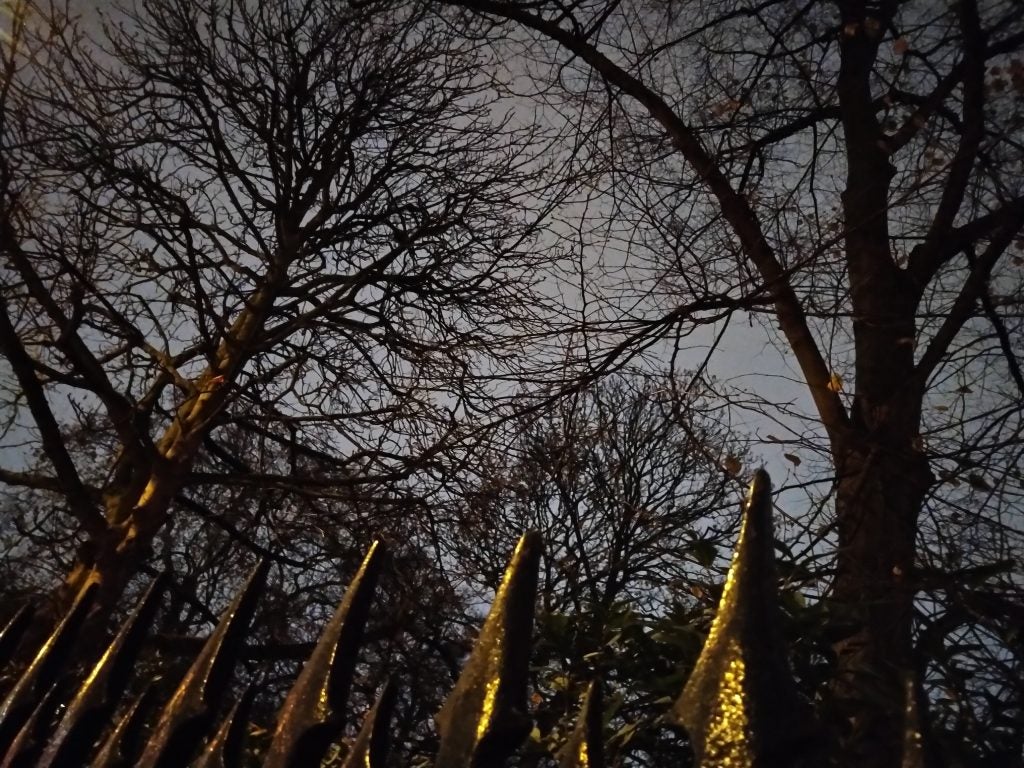 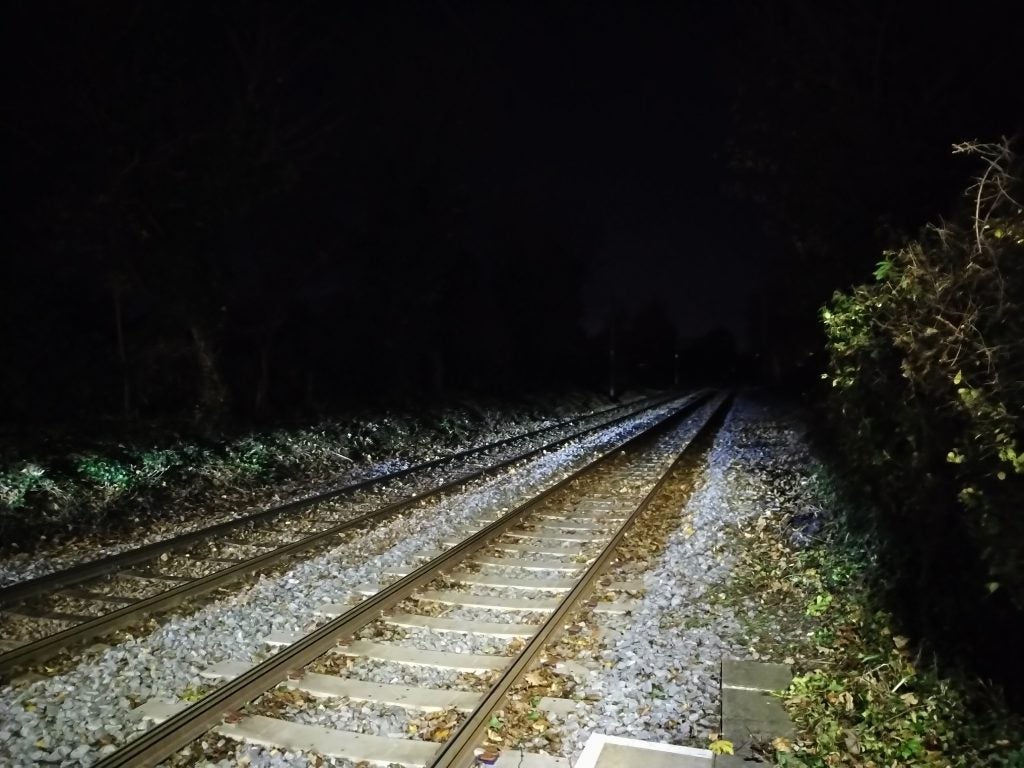 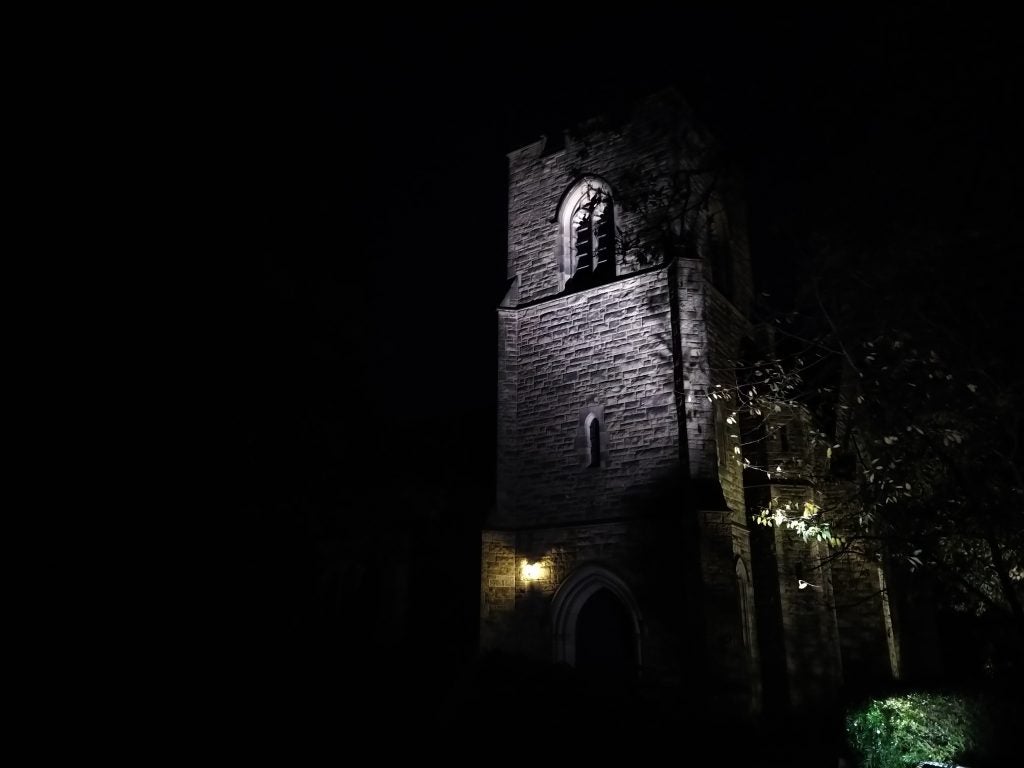 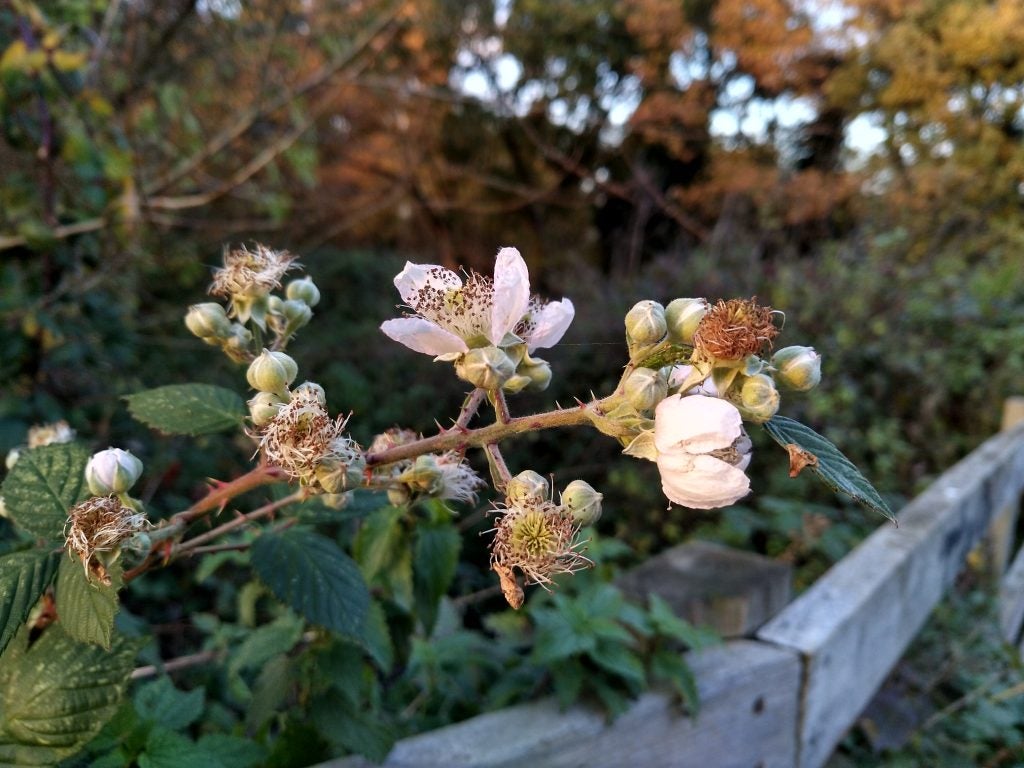 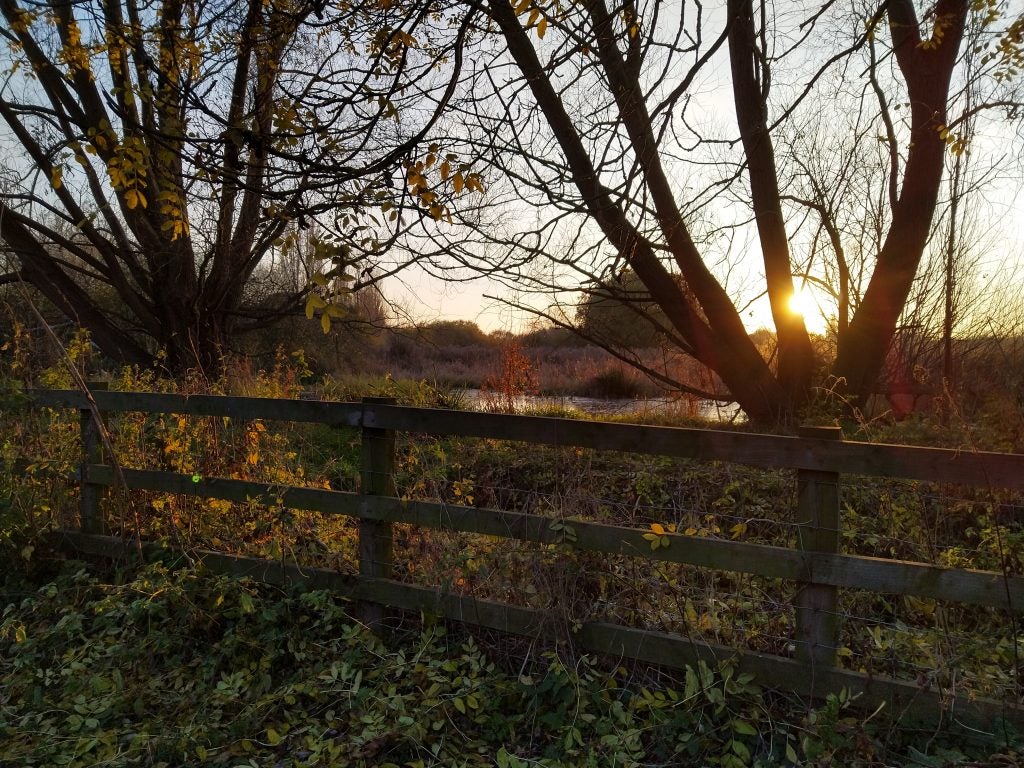 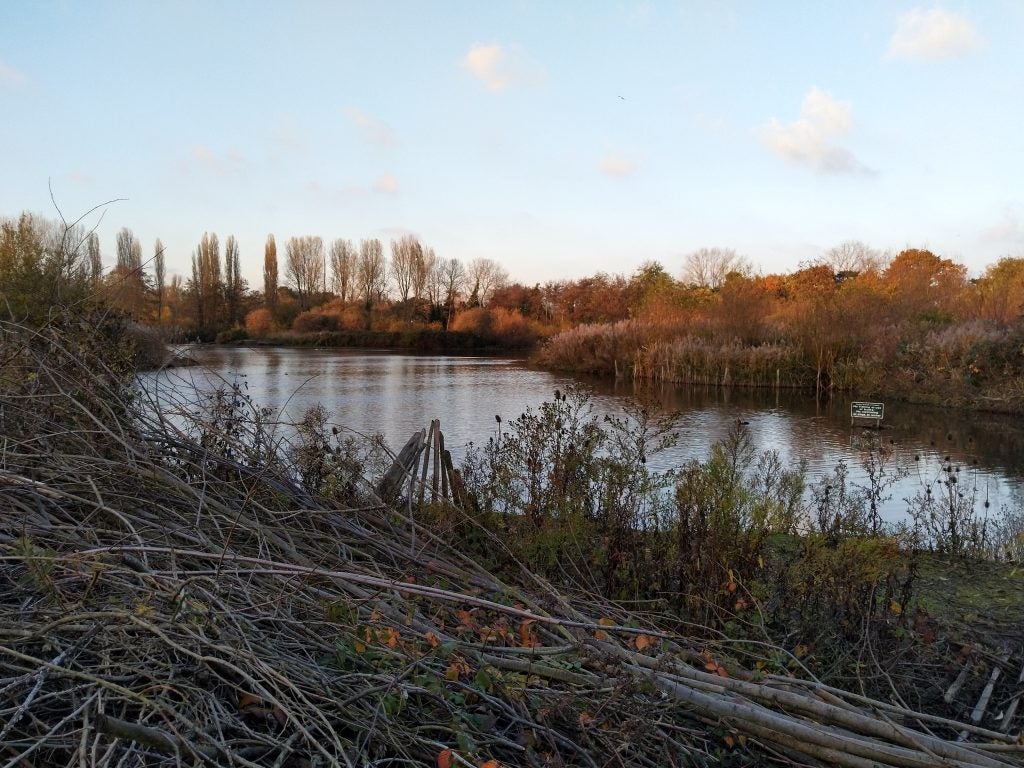 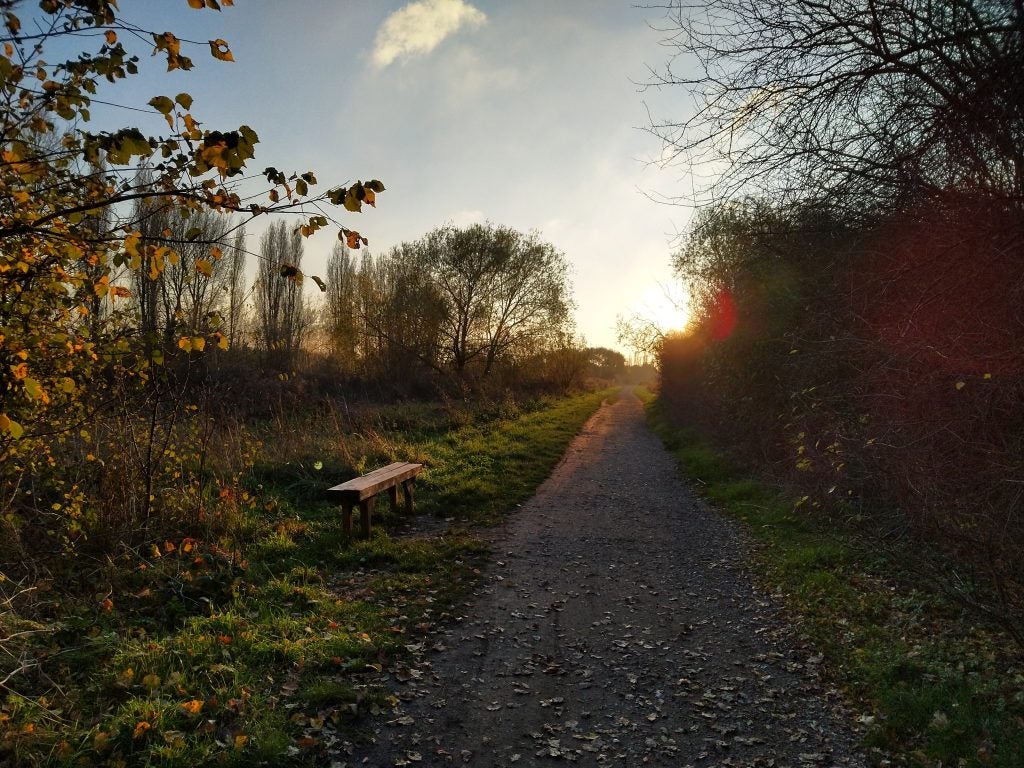 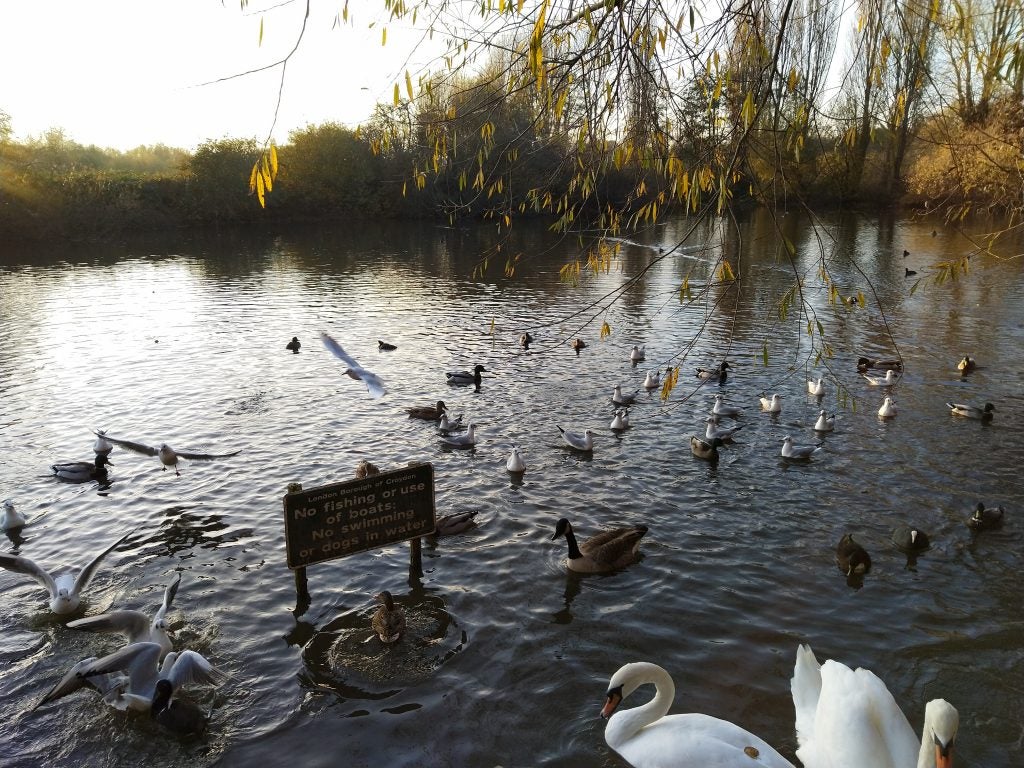 It seems highly likely that the Nokia 7.1’s camera is, or is a relative of, the Samsung Fast 2L9 sensor. It has smaller pixels than the best 12-megapixel models, at 1.28-microns instead of the 1.4-microns of the top phone cameras.

You can see some of the mild image quality deficit when you zoom in. Fine details just aren’t as clear and assured as they are through the eyes of a top camera. But this is a £299 phone, not an £800 one, and for the price the Nokia 7.1 performs well.

The Nokia 7.1 can also capture video at up to 4K resolution with the rear camera, although since only footage up to 1080p is stabilised, you’re probably better off sticking to Full HD.

And the front camera? Its 8-megapixel sensor is decent, and able to hold onto most fine detail in low-key indoors lighting.

The Nokia 7.1 has a 3060mAh battery, which is just a shade larger than the cell in the Moto One. However, just as the phone performs worse day-to-day, battery life is shorter too. 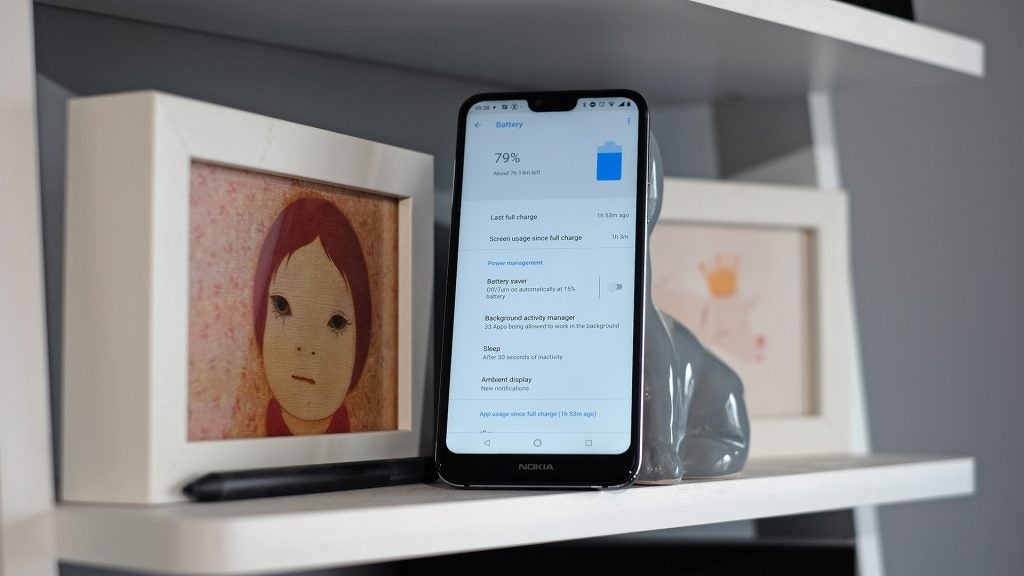 After a solid day of use, the Nokia 7.1 is either very nearly empty, or has already been topped up because it was almost dry before 7pm.

Like the processor and performance, the phone is worse in real life than it is on paper, and falls behind the competition. Fast charging is included, however, and the port is a USB-C rather than the older micro-USB style.

Not a surprise at this price, the Nokia 7.1 doesn’t offer wireless charging. 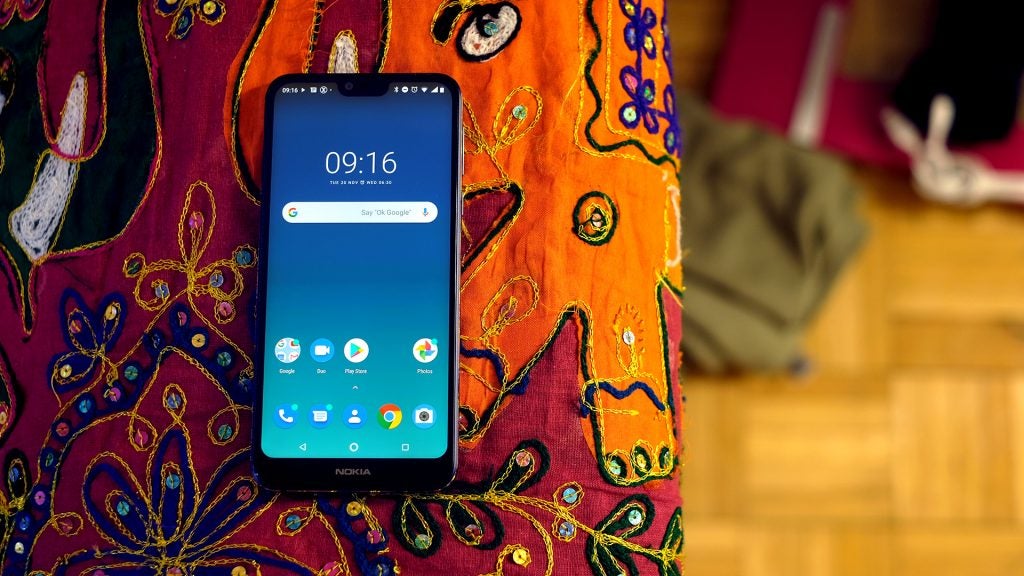 The Nokia 7.1 sounds like the best phone in its class. It’s more powerful and higher-res than the Moto One, and its camera hardware sounds more consistent than that of the Honor 8X.

However, it disappoints in two key areas: general performance and battery life. Neither is a disaster, but each is compromised enough to make the Nokia 7.1 seem disappointing. On paper, it should be significantly better than the Motorola Moto One. But it isn’t.

Unless you’re keen on the idea of Android One, you get even better value from the Honor Play and Honor 8X.

On paper, the Nokia 7.1 looks like one of the best phones at the price, but it’s let down by poor battery life and general performance.