The 5730 XpressMusic seems to be Nokia’s attempt to build an E75-style handset for the consumer market. Like the E75 it has a slide out QWERTY keyboard and front mounted keypad, but to tempt consumers it also includes dedicated music controls and the N-Gage gaming software. 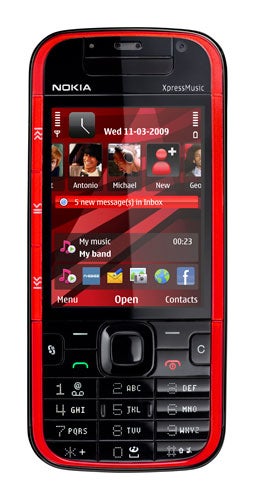 If there was a prize for fitting the most number of buttons on a handset then the 5730 would probably win hands down because it’s practically laden down with them. As well as the standard keypad, d-pad, camera and volume rocker buttons, there are also extra music transport controls down the left hand edge of the phone and a pair of gaming buttons mounted just under the ear piece. The latter can be used when you’re running N-Gage games in landscape mode to provide you with the games console button layout. While we’re by no means against lots of physical controls, it does make the front face of the handset look somewhat cluttered.


On the plus side, the sliding mechanism for the keyboard is excellent as it glides smoothly open, but also feels very robust. As the individual keys are relatively large and have a decent amount of travel they’re quite responsive to the touch. Nevertheless, they’re quite tightly packed together with no spaces in-between them so it’s fairly easy to hit a neighbouring key by mistake when you’re tapping out messages or emails at speed.


One major downside to having the keyboard onboard is that it adds considerable bulk to the phone’s frame. Nokia managed to shave off a few millimetres elsewhere on the E75, but that’s not the case here. As a result the phone looks and feels quite chunky, and despite Nokia’s attempt to jazz up the styling by adding a fiery red band around the face of the handset, it still remains one of the ugliest handsets in the company’s current line up. 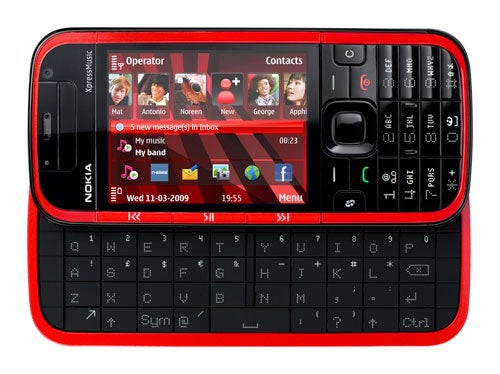 Given that the phone is being pushed on the basis of its multimedia prowess, the handset’s screen is obviously a key ingredient. At 2.5inches, the display is small compared to the massive screens we now see on touchscreen phones, but on a candy bar phone like this it takes up most of the handset’s face and the resolution of 320×240 pixels isn’t bad. It can feel a little bit cramped when viewing webpages, but for watching the odd video clip or for playing N-Gage games it’s more than adequate especially as it’s nice and bright and produces impressively vivid colours.


Nokia has used the 3rd edition of its Series 60 operating system on the 5730. Series 60 isn’t exactly the flashiest OS on the block, but it’s still a decent choice on candy bar handsets like this. And while it does run a bit slower on this phone than say the 5800, performance is not too bad. Nokia has also included the Feature Pack 2 enhancements, which basically means some of the OS’ transitions and animations look a bit slicker and that you now get some additional widgets such as the contacts one which sits at the top of the homescreen.

The phone’s music player isn’t all that different to the standard one you’ll find on most Series 60 handsets. The interface could do with a few tweaks here and there, but navigating through your library of tunes is very straight forward and there are some useful features like the 8 band equaliser and a widening setting that aims to boost the apparent stereo width of your music. The phone has a standard sized headphone jack that’s sensibly placed on the top edge of the handset and the supplied headphones are actually pretty good delivering pleasingly deep bass and crisp mid and high end frequencies. Nokia includes an 8GB microSD card with the handset for storing tracks, but larger cards of up to 16GB are supported. 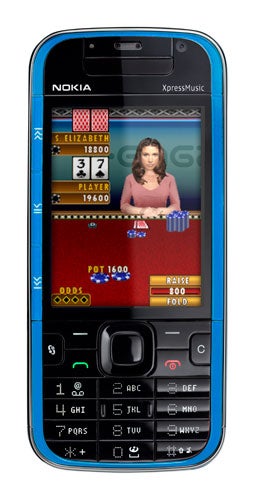 Along with music, the handset is also fairly handy for gaming thanks to its N-Gage software, which you’ll find tucked away in the Applications menu. A number of game demos are preloaded on the memory card including the Asphalt 4 driving game and an adventure arcade style game called Bounce. The games are pretty fun to play and we like the way the dedicated gaming buttons next to the ear piece give the phone the traditional feels of a games console when you’re holding it in landscape mode. However, the graphics aren’t a patch on those of the PSP or even the iPhone. More pressing, though, is that Nokia recently announced it will be dropping the N-Gage platform with no new development happening from September 2010 onwards. You can still use the apps after this point and there are plenty available now to download now but it’s still a concern.


While the onboard camera’s resolution of 3.2megapixels is a tad disappointing, the rest of the snapper’s spec is actually pretty good as it has a Carl Zeiss Tessar lens and both autofocus and a very welcome Xenon flash (rather than the oft used and very limited LED). Thanks to this rather nifty flash it’s actually pretty good at capturing indoor shots, while outdoor pics also have above average colour reproduction and pretty good levels of sharpness. 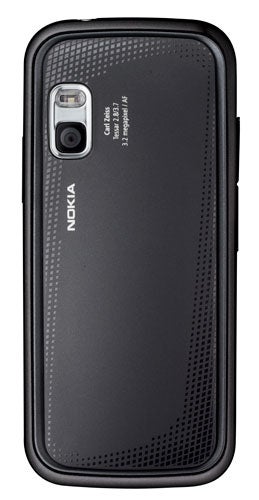 This handset is no slouch on the connectivity front either. Call quality was impressive throughout our test period and the phone supports both HSDPA and Wi-Fi for fast data downloads, which is especially important if you’re planning to use it for downloading music tracks. Naturally there’s also Bluetooth onboard, complete with A2DP support for wireless music streaming to stereo Bluetooth headsets, as well as GPS. The latter worked well with both the included Nokia Maps software and also the Google Maps software that you can download for free.


Nokia’s candy bar handsets usually have pretty good battery life, but in truth we found the 5730 to be a bit lacking in this department. All those multimedia features really do suck the life out of the battery and as a result we found we had to charge it after around a day and a half.


With its slide out keyboard, onboard GPS, dedicated music buttons and N-Gage support, the 5730 is certainly packed with features. However, we found it a difficult phone to love because of its chunky dimensions and awkward controls. The simple fact of the matter is that there are far better phones in Nokia’s XpressMusic range available at a similar price point.