It would be nice to say Nokia’s XpressMusic line of music oriented phones has enjoyed steady improvement since being introduced in 2006 but, to be frank, it’s gone in all sorts of odd directions over the years with some handsets being more successful than others. A reasonable attempt was the all touchscreen 5800 that arrived at the start of this year but it certainly had room for improvement. Today, then, we’re looking at another all touchscreen affair, the 5530, so let’s see if it can finally hit the nail on the head.


To look at, there’s a degree of improvement from the 5800 to the 5530 with a less pronounced lip round the edge of the screen and a generally slimmer and smoother look throughout. However, with a plethora of buttons all round its edges and rather unattractive grills above and below the screen, it’s certainly no fashion phone. 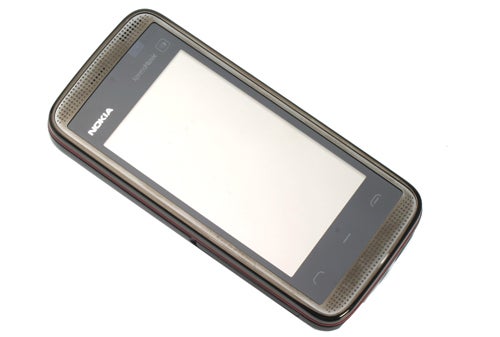 In particular, we fail to see the necessity in this day and age to have separate power, lock, and call end buttons. A well designed operating system should allow for all of these to be incorporated into one button or replaced by touchscreen gestures, both making the phone neater to look at and simpler to use. Likewise, the XpressMusic button, which drops down a list of shortcuts to the phone’s media features (music, pictures, online services, video, and web browser), seems a bit pointless, especially as it isn’t accompanied by hardware multimedia playback controls. 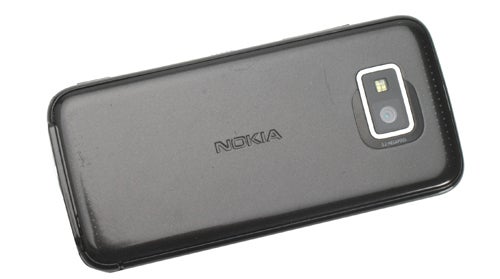 Build quality is also a concern as the back is an absolute pig to get off and is so thin that it bends very unnervingly as you force it off. Thankfully you shouldn’t have to remove it all that often as the microSD memory card is accessible from the side. Seemingly you can also get at the SIM slot from this side flap except you actually have to remove the back and battery to push the SIM out – it’s a very odd arrangement. The screen also has a soft flexible surface so will be very prone to scratches. 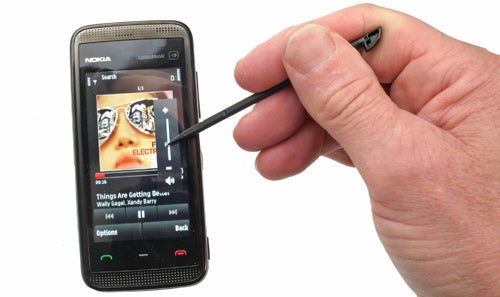 As you may have guessed from that last fact, this uses a resistive rather than capacitive touchscreen so requires a good prod to elicit a response. This makes typing on the onscreen keyboards (QWERTY when held in landscape, numpad when held in portrait) rather slow, something that wasn’t helped by the rather clunky layout of said keyboards. At least we never felt the need to resort to using the 5530’s stylus.

In contrast to its touch sensing, the screen is visually quite accomplished. It packs 640 x 480 pixels into its 2.9in frame so copes particularly well when viewing web pages and emails. It also produces nice natural, if slightly muted, colours, and viewing angles are excellent. Were it not for the fact that video support isn’t great, it would be good for watching videos as well. 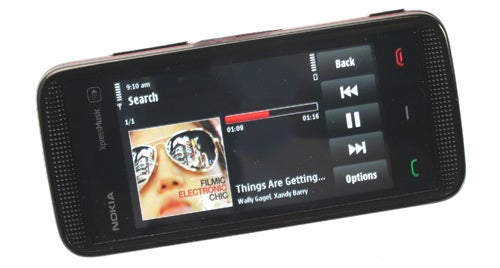 Also pleasing us is the presence of a proper headphone jack on the bottom of the phone. It produces great quality audio (relatively speaking) and will work with any 3rd party headphones, which is something we’d normally recommend you invest in. However, the bundled headset actually incorporates a very passable set of in-ear headphones that produce clear and precise audio with plenty of bass. Most importantly, the soft silicon tips block out a decent amount of external noise, reducing the need to play your music at high volume and potentially damaging your ears. There are three tip sizes to choose from, too, so you should find a pair that will fit comfortably and securely. We were rather annoyed that the in-line remote didn’t control music playback, especially as the 5530 has no dedicated music controls (the button on the remote only answers calls).


Sadly, adjacent to the headphone socket is something we hoped we’d never see again on a Nokia phone – a proprietary charging socket. This is despite the phone also having a standard micro-USB socket for data transfer. A 4GB microSD card comes included, which is enough storage to give you many hours of portable music. If you’d like to upgrade to a larger card, up to 16GB ones are supported.

Something else that will be stored on any memory card you install will be photos from the phone’s camera. It packs in a 3.2-megapixel sensor, can autofocus, and has a small LED flash above it. Performance is okay thanks to the application loading quite quickly, though only managing two shots in 10 seconds is nothing special.


The camera produces results that are on a par with most other phone cameras of its type, so in good lighting you can get a perfectly acceptable picture with enough detail for casual photos, reasonable colouration (erring towards oversaturated), and good exposure metering. In more challenging situations, where subjects are moving or there’s poor lighting, it does struggle as would be expected. Video is also available and with a resolution of 640 x 480, a decent framerate, and that LED light for dark situations, it ticks all the boxes we’d expect. Obviously it has its limits but for a quick clip, it’s fine.

Moving on to the 5530’s software and, like the hardware, we have a rather mixed impression. Overall, the S60 operating system feels incredibly clunky as it’s slightly sluggish in operation. It also misses out on basics like multiple desktops, while inconsistencies in its interface can be somewhat irritating. For instance, on the one hand you can scroll lists simply by placing your finger on the screen and moving the list, while on the other, grids of icons require you to use a scroll bar. Likewise the lists require a double tap to choose options while the icons only need a single tap. 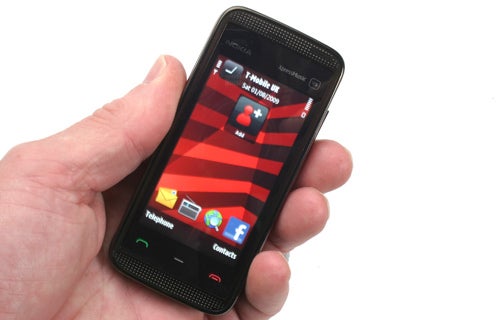 These things aside (and the rubbish onscreen keyboard notwithstanding), the OS gets the job done and is very capable in terms of features thanks in particular to support for the OVI app store. The web browser is also very good, though we wish it would remember the addresses typed in on previous sessions. 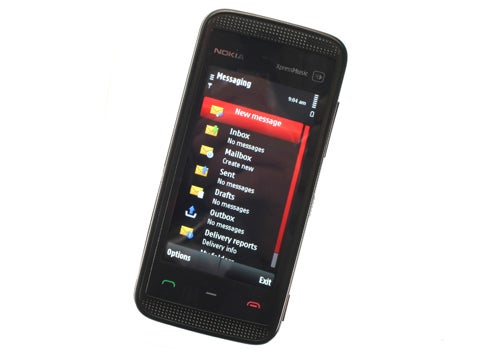 Call quality is good with plenty of volume available from the earpiece and clear audio being sent from the microphone. The stereo loud speakers are also loud enough for conference calling and could even be used for occasional music listening.


The 5530 is a quad-band phone so it should work in most countries. It also supports EDGE, but not HSPA for the fastest mobile browsing. Wi-Fi is included, though, so fast browsing will be possible if you’re within range of a wireless access point. 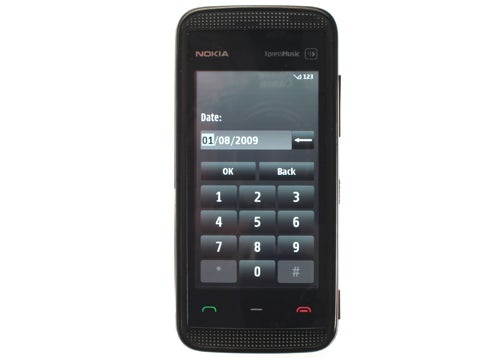 The battery is a 1,000mAh unit that Nokia claims provides battery life of 14 days standby and talk time just shy of five hours. As we’ve come to expect from touchscreen phones, we found that the 5530 would run low after a couple of days with regular use. However, it does last longer on standby than some smartphones that have loads of push notifications, so it can easily last several days with light usage.


The Nokia 5530 XpressMusic is a reasonably powerful handset with a full range of features, which also lives up to its mp3 player pretensions with regards audio quality. However, the lack of dedicated music controls, proprietary charging socket, cluttered hardware controls and generally clunky software interface leave significant room for improvement. 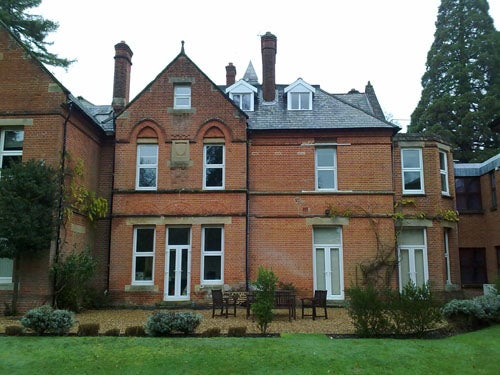 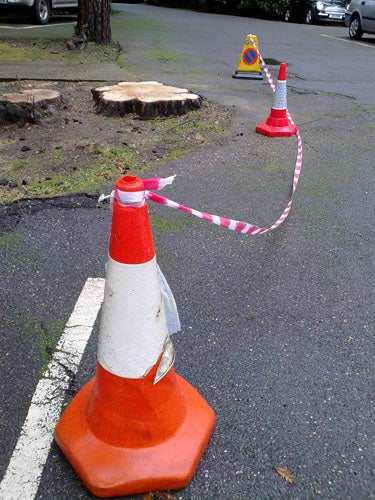 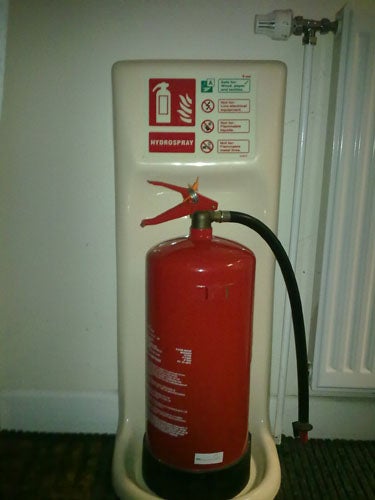 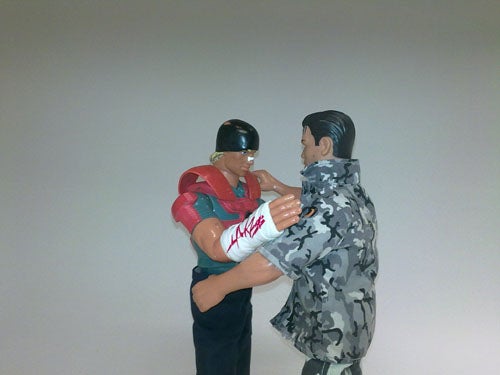